LOL dolls capitalize on the same collection instinct that made Pokémon a global phenomenon, just with a focus on young girls. LOL balls come separately or in packages and contain dolls, pets, stickers, accessories, and more. Some of these can be extremely rare.

Avid collector moms have devised strategies to test the rarity of the contents even before the ball is opened. Even still, coveted gold balls that contain the rare and ultra-rare LOL dolls are considered pretty desirable today. Read on to learn about 8 of the rarest LOL dolls you can unbox. Or “unball.” 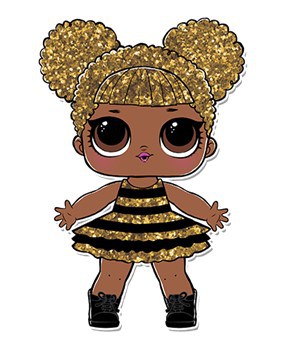 The limited-edition Glitter series is known for exclusivity. Queen Bee was already a rare doll in Series 1, but in the Glitter series her rarity goes all the way up to “fabulous.” This is one of the dolls people invent hacks just to find them more efficiently.

You’ll know Queen Bee by her glittery gold hair, bee-colored gold and black striped dress, and black boots. She has a twin (King Bee), an older sister (Royal Bee), and a pet (Pup Bee). She’s the only “Glitterati” doll in series one that comes with a secret message. Suffice it to say that any young collector would be overjoyed to unbox their doll and see the frills of their own glittery Queen Bee.

Queen Bee is based on Beyonce, which is evident in her glittery, frilly dress in the Glitter Series variant. Just look at Beyonce’s 2008 music video for “Single Ladies” to see the similarities. 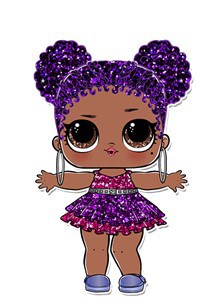 Purple Queen is an ultra-rare find in the Lol Surprise Big Surprise series. She has a little sister (Lil Purple Queen) and comes with the exclusive surprise: she’s one of the few dolls in the series to cry.

She’s immediately recognizable by her glittered pink top tied to a cute, frilly skirt and separated by a silver belt. She has indigo shoes to match. Lovers of purple, pink, and glitter clamor after Purple Queen as the rarest doll in her series and one of the rarest in Club Glitterati as well.

Purple Queen’s signature purple look is based on Prince (RIP), well-known for his life-long relationship with purple and looking fabulous in it. 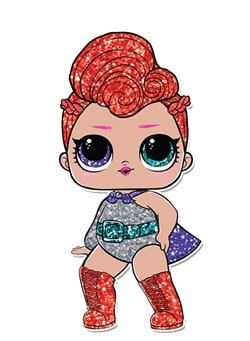 Stardust Queen, like Purple Queen, is one of the biggest prizes awaiting kids who unbox the Big Surprise series looking to complete the Glitterati club. Stardust Queen looks like a superhero or music diva with her tall coral hair with woven braids, one-sleeve glittery silver outfit, and shiny purple cape. She also has tall boots colored coral like her hair and a beautiful teal belt.

She has a unique face too, fair-skinned, pink lips, and multi-colored eyes (one teal and one purple). Stardust Queen has a little sister (Lil Stardust Queen), an older sister (Major Lady), and a pet (Doggie Stardust).

Stardust Queen gets her name and look from Ziggy Stardust, the iconic stage character created by David Bowie. The opening line of his famous song, “Space Oddity,” is also where she gets her quote (“Ground Control to Major Tom”). 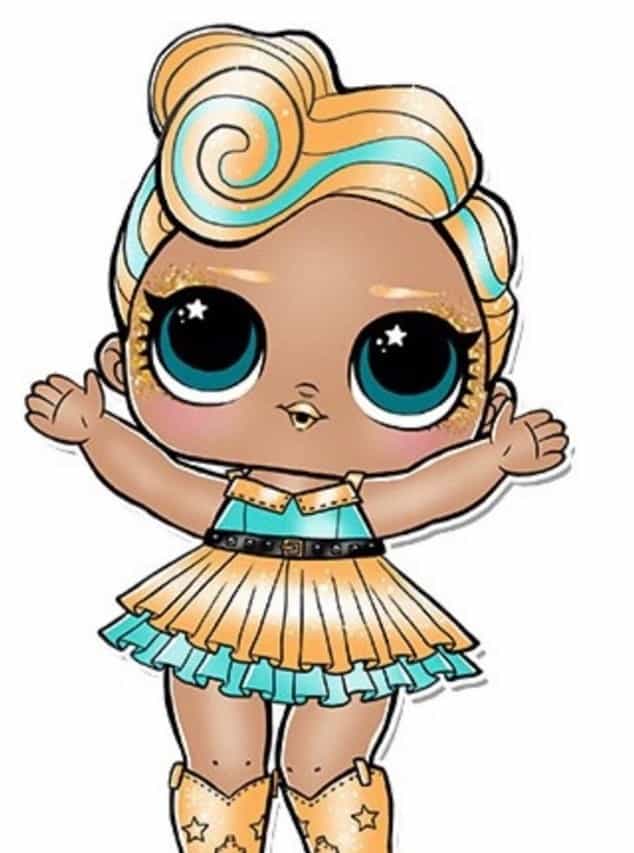 Luxe is the ultra-rare doll that lucky buyers could find in Series 2, as part of the 24K Gold club. This doll has light brown skin and striking teal eyes, as well as golden hair with teal highlights streaking through it. Her gold and teal skirt shines like metal over her golden cowboy boots.

In her ball, she comes with some exclusive accessories like gold-rimmed glasses complete with teal lenses and a 24K gold baby bottle. She also has a younger sister (Lil Luxe) and a pet pony (Lucky Luxe).

Luxe is the only doll in LOL dolls history to have a golden tab. 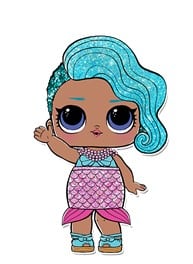 The Glitterati Club comprises a lot of the rarest dolls in LOL doll history, including this ultra-rare baby, the Sea Queen. Mermaid lovers seek her out for her pink mermaid tail dress, chains of pink pearls, and light-blue seashell top. She has blue sandals with cute blue bows to complete her beach-loving attire in style.

She has stylish azure hair shaved on one side and curly and flowing on the other. Her indigo eyes sparkle against her brown, pale skin.

This ultra-rare doll is actually the only one in the Series 2 Glitterati Club and the only doll with a mermaid theme other than Merbaby in Series 1. 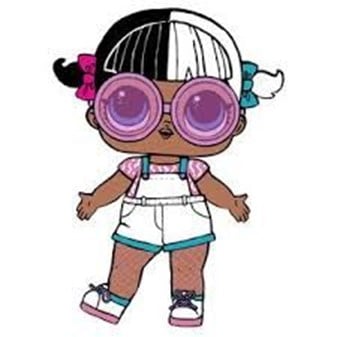 Baby Next Door is immediately recognizable by her half black and half white hair and her ability to change color. She’s an ultra-rare big sister in the Surprise series, made as part of the New Kids Club. In the same series, she has two brothers (Lil Boy Next Door and Boy Next Door), a little sister (Lil Baby Next Door), and a pet named Puppy Next Door (of course).

She has dark skin and eyebrows, indigo eyes, and comes with pink-rimmed, pink-tinted glasses. She has cute white overalls and pink fishnet tights that lead down to white boots. When she changes color, her hair streaks with black and her overalls gain black sleeves.

The name seems to be a reference to “girl next door,” a phrase usually used to describe the kind of girl you would want to date. For this reason, Baby Next Door and her siblings are some of the dolls used as evidence by parent groups who consider the LOL dolls inappropriately themed. 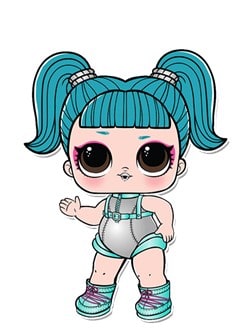 If you’re on the hunt for Glamstronaut, you’ll notice her teal pigtails immediately. She’s an ultra-rare doll for Series 3 that was actually reissued in the LOL Surprise! Sparkle Series, giving you another chance to nab this collector’s doll.

She has pink eye-shadow and brown eyes to contrast her blue hair. She wears a sleeveless silver jumpsuit with mint highlights and moon boots. She has accents of metallic silver all over, including her hair ties and lip-gloss.

Since Glamstronaut is an ultra-rare doll in the Glitter series, she has both cold and heat color-changing properties. Her heat change is pretty conventional, with her hair turning lighter green and her bangs going white. Her cold change is way more fun as she really lives up to her outer space origins, turning bright purple all over with dark star patterns around her eyes. Her silver suit and teal boots turn bright pink. 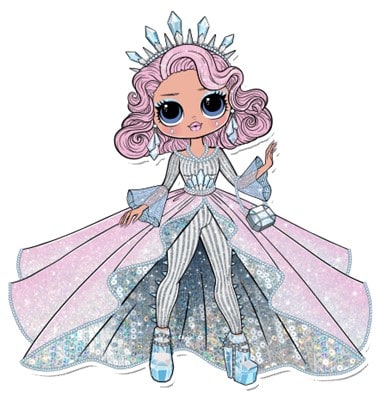 Crystal Star is the rarest LOL doll you can buy. Unlike the others, which come in random levels of rarity in the LOL balls, Crystal Star is a collector’s edition figure in the OMG fashion doll line, as well as a member of the Glitterati club. She came out briefly in September of 2019 in the Winter Disco series and then briefly again in 2020 in a limited number on the LOL Surprise website. She has sisters (Crystal Queen and Lil Crystal Queen) as well as a pet named Crystal Bunny.

Crystal Star is a true princess among LOL dolls, with pastel pink curls falling over her blue eyes and pink lips. She has crystal gems speckling her cheeks and hair and her dress glitters all over. It’s a metallic silver jumpsuit with clear blue bell sleeves and a huge silver and pink skirt with silver sequins. This can be detached to achieve different looks. For accessories, she has glittering silver-glue pumps, a gem-shaped silver purse, dangling crystal earrings, and a gemstone tiara.

Crystal Star was the very first OMG fashion doll ever produced. They only made her for a limited time to make her even more special for those that were able to grab her when she went on sale.

LOL dolls come in various editions and versions that are rarer than others. Some people have figured out how to hack the system and guess which balls contain ultra-rare dolls before opening them, but no system is foolproof. You just have to buy and hope you can nab one of the rarest of the rare. Whether you think the dolls are adorable or inappropriate, they’ve become a wild sensation for budding collectors (and their moms) to pop out, dress up, and enjoy.