Like any sport, golf has a broad range of enthusiasts who appreciate the intricacies of the game. They look at the best courses, irons and, of course, the golf balls. Although it appears simplistic, the golf ball is optimally designed for the best play results—accounting for various factors that affect its speed, accuracy and height during the game. Since its inception in the 15th century, golf has involved several iterations and improvements on the ball that have resulted in some rare collector’s items. Read below to learn about all the unique golf balls the sport has to offer. 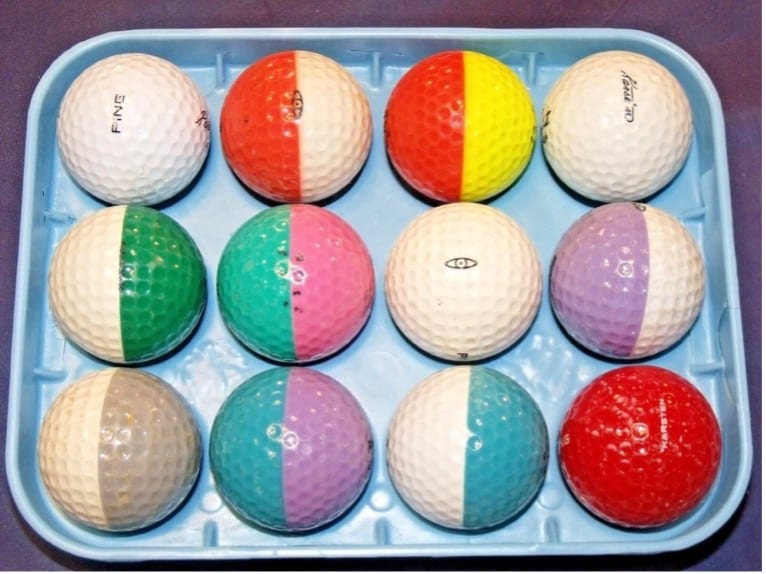 Ping developed these trendy golf balls known for their multi-colored designs until 1997. They didn’t add much to the game, but they did offer an easy way to spot and collect golf balls after a day on the green. Today, certain color combinations are worth upwards of thousands of dollars, but it requires a keen eye and ample collection to locate these rare pieces.

Golf originated in Scotland during the 15th century. 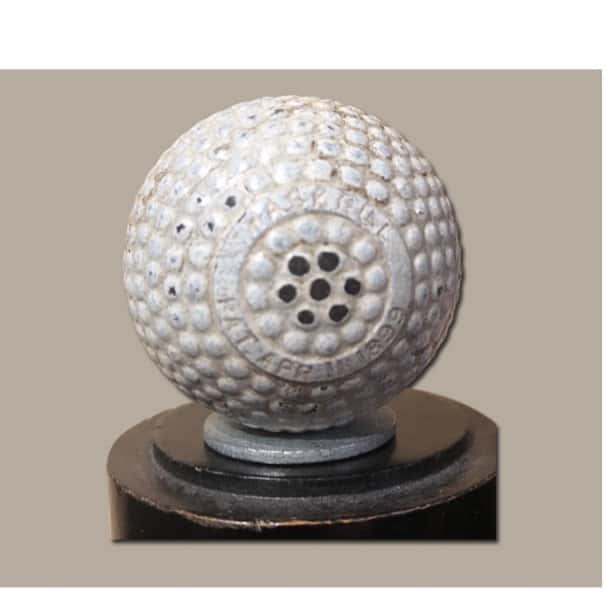 The Haskell Bramble-patterned golf ball was part of an inspiring golf legacy cut short by greed. Before Haskell, golf players used the gutta-percha, a ball made of tree sap that was supposed to improve on the feathery, one of the earliest golf balls. While it was better in some ways, the gutta-percha lacked control and was difficult for golfers to hit. Enter: Coburn Haskell and his design partner Bertram G. Work. Together, the two developed a prototype for the Haskell golf ball, which used a rubber thread fastened around a hard rubber core. The result was better control, better contact and a better game. For nearly two decades, the Haskell company had the exclusive rights to design these balls—increasing the sport’s popularity and the money in the company’s pockets. Haskell sold his company in 1917 and it ceased operations the same year.

Coburn Haskell was himself an avid golfer and a common fixture in Cleveland, OH’s sport and business circles. 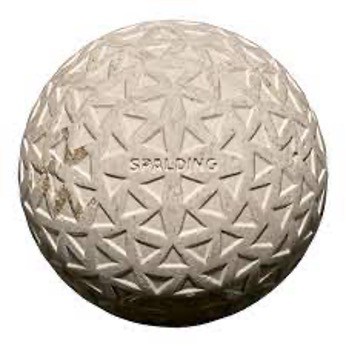 Rare today, golf balls used to come in a variety of fun patterns. A few companies produced triangle mesh balls, including Spalding—which still produces sports items today. Although these balls aren’t the rarest of golf collectibles, they remain an unexpected and unique part of any collection.

The mesh or dimples found on golf balls add lift and helps the objects travel better in the air. 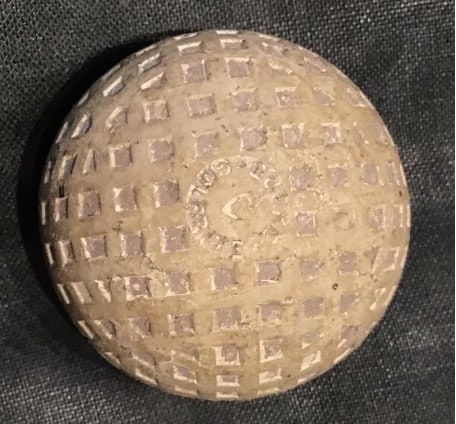 As a vintage item, this golf ball is only increasing in value—especially given that the Ebay seller claims it came from the bottom of the Biltmore Golf course in Miami.  Unlike the average golf ball, which features a circular pattern, this one dons a square mesh. Burke GolfRite is now defunct, making many of their products valuable vintage finds.

The word “golf” is a derivation of the Dutch word “kolve,” which means “club.” 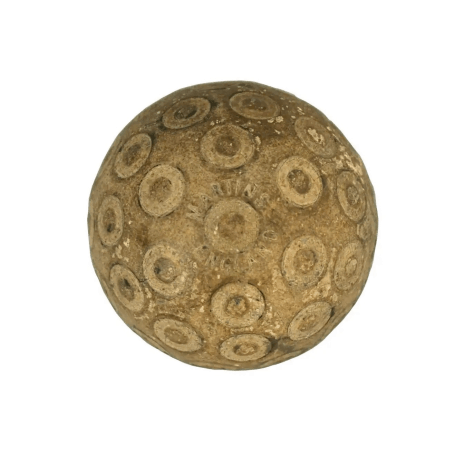 Produced in England by Martins-Birmingham in the late 19th century, this odd-looking golf ball is one of the earliest examples of mass production in golf. Notably, its puckered pattern demonstrates the experimentation and homegrown elements that existed even in factory-made golf products at the time. Additionally, while inventors like Coburn Haskell were starting to perfect the ball’s design, the value of consistency was not fully realized. Since the ball’s dimples have such an impact on the game, they must be optimally shaped and identical for a fair game. Clearly, Martins Zodiac had a long way to go, but it remains a fascinating piece of golf history.

Mission Hills Shenzhen is the largest golf resort in the world, boasting 216 holes and 12 courses. 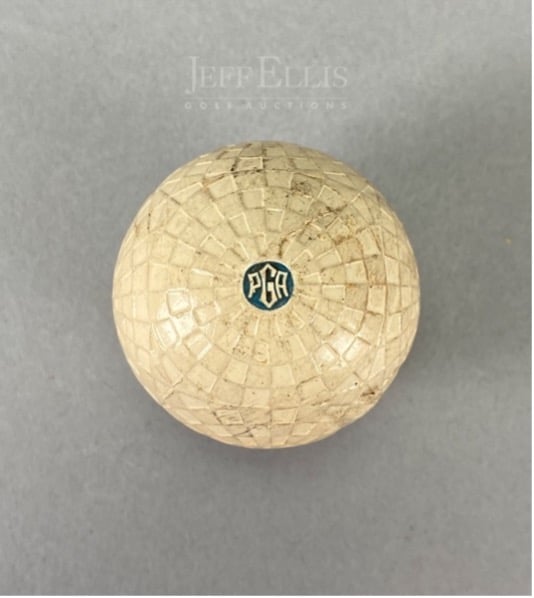 Another example of mesh experimentation, this early 20th century golf ball from Worthington features an alternating raised and recessed square dimple pattern. It also includes a red “Wilson” stamp on one side for an unknown reason , but it might indicate that Wilson helped in the final production process. In any case, the unique pattern makes this ball quite rare today.

Worthington Golf Ball Co. reproduced this ball in the 1990s as part of their “Anthology of Golf” set. 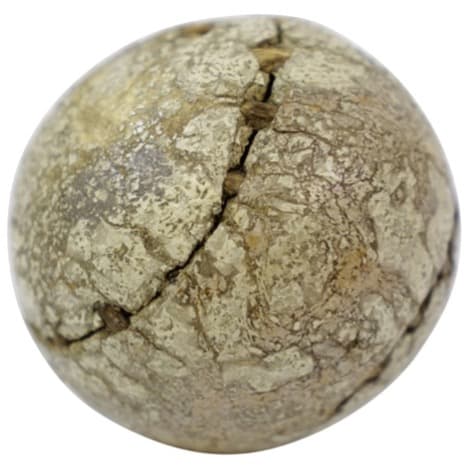 Featheries were the first standard-made golf balls. Most likely created between the mid 16th and early 17th centuries, this model followed the use of generic wooden balls to play golf. Improving on their predecessors, featheries were small leather balls stuffed with feathers. Through a special drying process, the ball became hard—just as golf balls are today. Unlike the other balls on this list, featheries weren’t mass produced. Instead, athletes and specialists handmade them, which has increased their value and overall rare status. Their DIY quality was also a detriment, leading to misshapen balls that didn’t function properly.

Featheries were standard in golf until the 19th century. 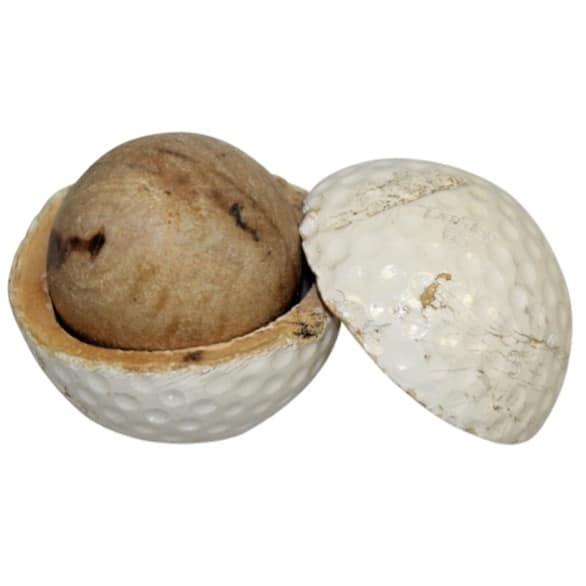 Due to World War II rations, the US replaced golf balls’ rubber core with a wood one. This change significantly reduced the ball’s functionality as the standard core helps stabilize the ball and manages its speed and distance. For the years that the war went on, though, golfers had to sacrifice rubber—one of the first items to be rationed—as the government used it to produce military equipment.

The first golf tours in America occurred in the early 1920s. 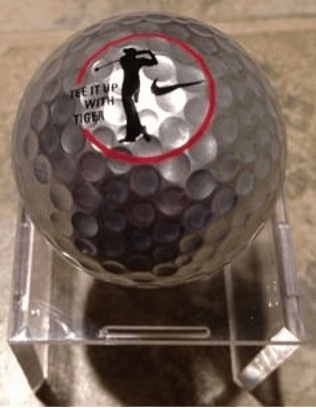 As part of a contest, Nike produced 2,000 platinum golf balls that were then included in boxes of Nike One Black or Nike One Platinum golf ball sets. Of these balls, each with a unique serial number, 24 featured a stamp of Tiger Woods mid-swing. Finding one of these doubly limited-edition balls meant the opportunity to play Woods in a single hole game.

Year: 1891
Notable Features: At the bottom of a lake 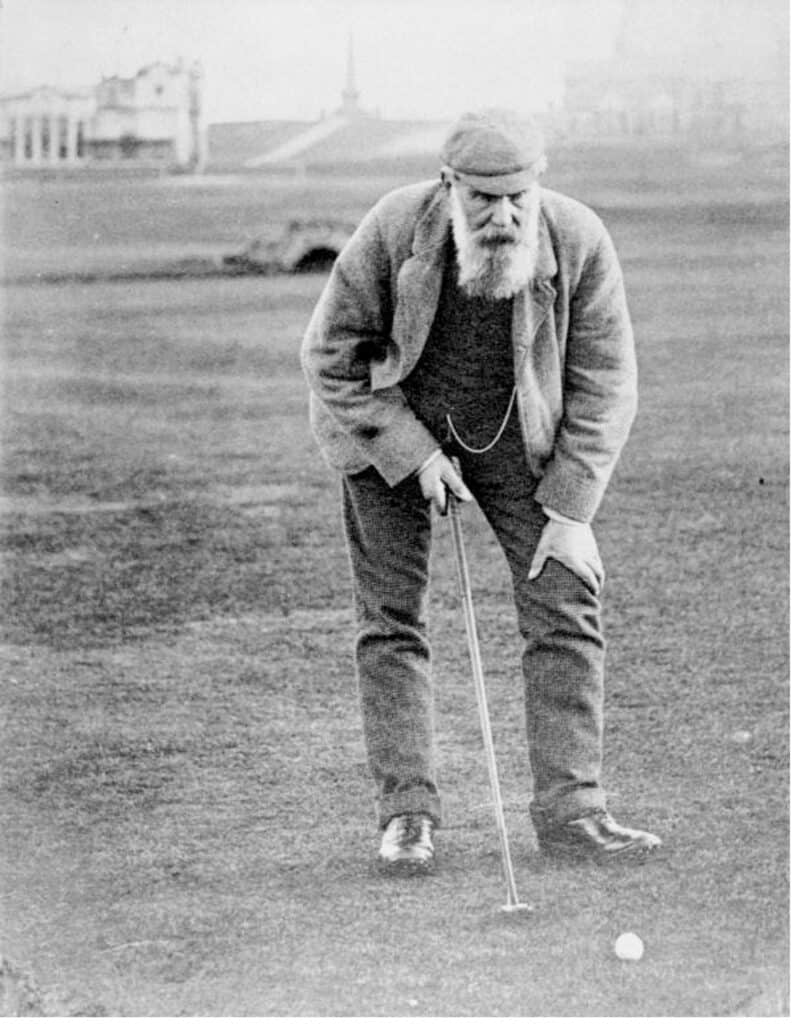 While some might dispute this, the rarest golf balls in the world belonged to Scottish golfer Old Tom Morris, a well-known athlete in his era who putted about 20 or so golf balls into Ireland’s Lough Salt in the late 19th century. The mystery and relationship to Morris have made these golf balls highly sought after by athletes and collectors alike. Morris was brought over to the area to help design a golf course, explaining how 20 or so of his personal collection ended up in the water. Notably, the design of these balls isn’t rare. They were gutta-perchas, standard for the time and quite difficult to play with.

Lough Salt is one of the deepest lakes in Donegal County—making the golf balls a real treasure. A team of divers searched for them in 2012, but there are no accounts of whether they were successful.