While fishing lures might not draw the same big crowds as collectible action figures or mint condition dolls, there are still numerous enthusiasts interested in the history and design of these items. The lure’s constant innovations throughout the years, in terms of both design and materials, demonstrate human ingenuity and artistry. With so many lures, there are several that are considered rare and valuable. Follow below to get hooked on this niche world of collectibles. 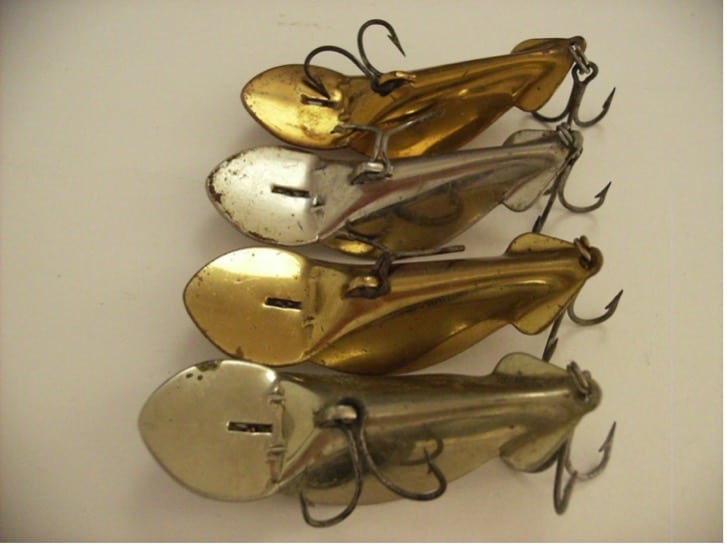 Buck Perry invented the spoonplug after growing frustrated at his inability to catch fish at the local lake, as the creatures often remained deep under the water’s surface. His invention kept the lure at a fixed depth and, therefore, caught more fish. Additionally, its metal body attracted fish by reflecting light. Perry created the first spoonplug in his home with a pair of pliers and later sold them in multiple colors. The invention of the spoonplug marked a change in how fishing lures work, revolutionizing modern sportfishing.

The spoonplug takes inspiration from two other kinds of lures. The spoon lure attracts fish through reflecting light, while plug lures are designed for deep and shallow river fishing situations. 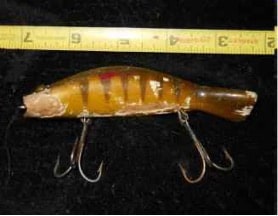 The Paw Paw Bullhead was made in 1929 and discontinued in the 1930s, making it fairly rare today. It was made of wood and painted in various colors, depending on cost. It also featured two three-pronged metal hooks.

The Paw Paw Bait Company bought the Moonlight Bait Company, which was founded in 1908 by Horace Ball and Charles Varney. 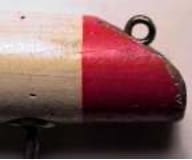 Bass Oreno lures were around for a long time, meaning that they’ve been through several changes as well. The first versions were made in 1915 and not very intricate. They were wood with red and white paint. Notably, they also didn’t feature any sort of eyeballs– painted or glass. They did feature screw eye hook hangers, which were harder to remove than hook hangers, which were employed later.

As the name implies, the Magnum Torpedo lure is shaped like a torpedo and features a spinner tail to better dive into the water. It also included two three-pronged hooks on either end. Unlike many of the other vintage lures on this list, this was one was made of plastic rather than wood. It was sold in several colors, but the yellow version with black bone is the rarest.

You can tell when a Magnum Torpedo was made based on its eye color and overall shape. 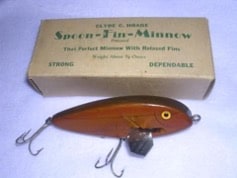 The Spoon-fin minnow fishing lure from Clyde C. Hoage is difficult to find today. It’s made of wood and featured glass eyeballs, and, sometimes, included red paint. It had two three-pronged metal hooks as well as metal fins stamped with the company name. It was probably made in the 1930s.

Fishing lures have been around for centuries, first made of bone and bronze with evidence of use in ancient Egypt and China. 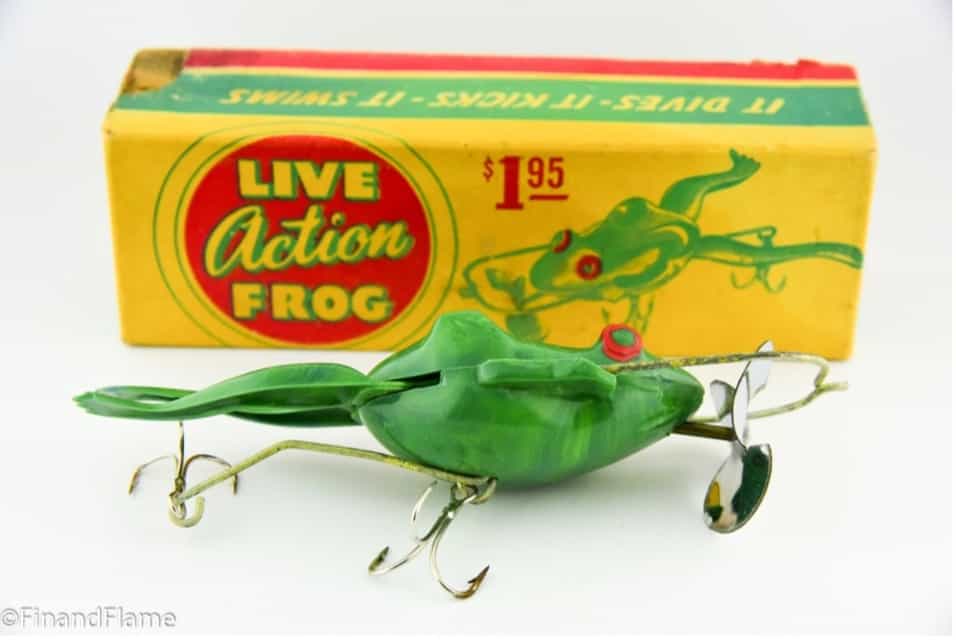 Long Beach, CA-based Action Frog Corporation created this intricate fishing lure in the 1960s. It was the only lure made by the company and was only produced in green plastic. It included a spinning propeller in the front that made its legs kick like a real frog as well as two three-pronged metal hooks. It’s even rarer to find it still in its colorful box.

The first instances of fly-fishing, which uses flies rather than lures as baits, occurred in the thirteenth century. 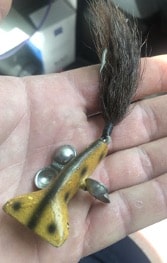 The Layfield paddle lure featured a wooden body with two metal paddles on either side to help it move. It’s largest claim to fame, however, was the tuft of skunk hair featured on its end, which helped It float and also gave it the nickname, “Cotton’s topwater.” It came in a few colors, including a yellow and black combination, but time has rendered some examples quite worn.

Since 2002, China has been the largest international seafood exporter with an industry worth $14.1 billion. 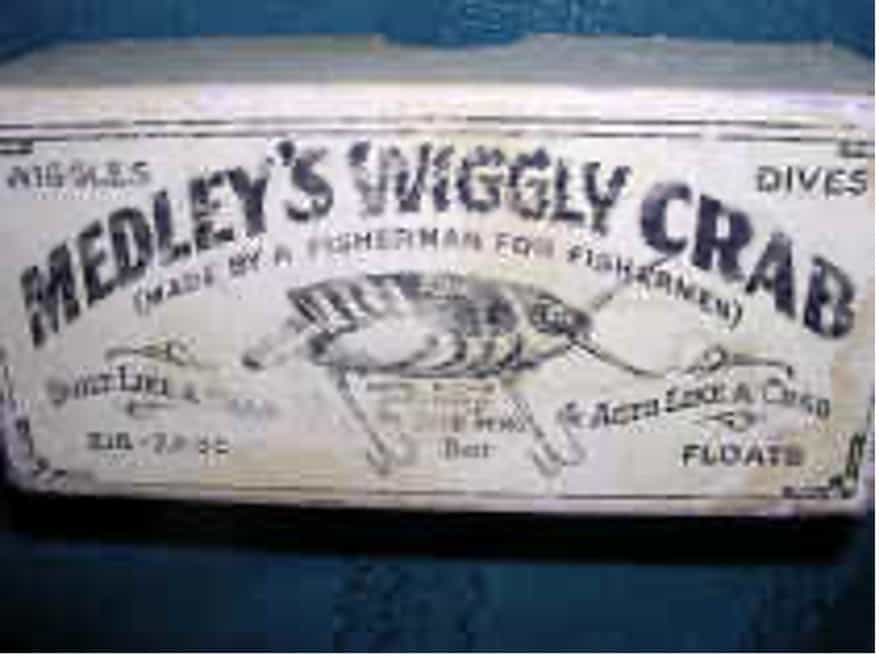 Henry Medley filed a patent for the Wiggly Crab fishing lure in 1919 as a new way of deep sea fishing and trolling. Like the spoonplug that came after it, the Wiggly Crab was designed to go beneath the water’s surface and mimic a living fish with a V-shaped tail capable of moving. The lure also includes to hooks that dangle from the bottom of its body. The lure is almost impossible to find online today, making it quite rare.

Due to the environmental impact of modern plastic lures, some companies have started to produce lures made of biodegradable materials.

The Neon Firefly is mysterious as far as lures go. Experts don’t know much about its history, but its packaging indicates that it’s from the Saint Croix Bait company and was probably produced between 1920 and 1930. Some experts speculate that it was the first example of a plastic lure ever made. It used red and clear plastic, the latter of which held liquid mercury that glowed underwater to attract fish. The materials are probably part of the reason not many Neon Fireflies were made.

In many cases, fishing lure boxes are more valuable than the lures themselves because they were often thrown away. 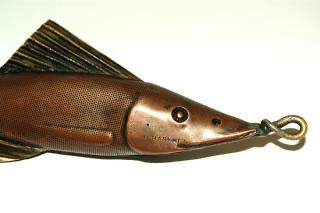 The Haskell Minnow lure is worth over $100,000 as a result of its one-of-a-kind nature, making it the rarest fishing lure around. It was created when expert hunter Riley Haskell decided pursue to  fishing and handcrafted many lures with various purposes. As a result, many of his productions were one-off art pieces. All of them were fish-shaped and hollowed bodied and very few survive today. The $100,000 minnow is special in its rarity as well as its size at a whopping 10-inches.

The largest great white shark ever caught weighed 2,664 pounds. It is the largest fish ever recorded by the International Game Fish Association.