Vodka may be more synonymous with Russia than any alcohol is famous for its country of origin. Despite that fact, vodka comes in different varieties from many Slavic and Nordic countries, including Sweden and Poland. Vodka itself is made from distilled fermented cereal grains like wheat and corn. Some less traditional bases for the drink include fruit, potatoes, or even maple sap.

Unlike many popular alcohols, vodka is drunk almost exclusively straight. This gives it a kind of classy allure of its own, as it is served chilled in a freezer to people throughout Eastern Europe. In America, it may not be as popular, but even still, connoisseurs can partake of the most expensive vodka varieties currently being sold, which are worth thousands or even millions of dollars per bottle.

Here are the 8 most expensive vodkas in the world. 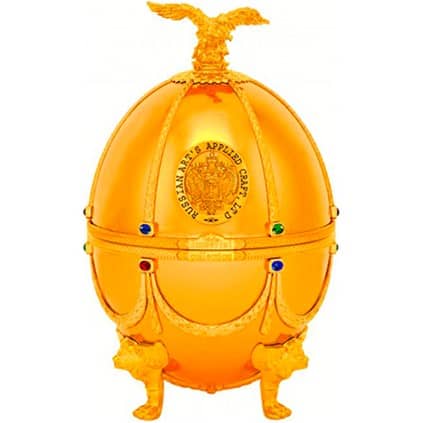 This Gold Edition Vodka was created for Faberge’s Imperial Collection. They create not only their famous Faberge eggs but also glasses and decanters, made from Venetian glass. This vodka egg is gilded by hand and colored with enamel that accentuates the natural 24-karat gold of the egg’s lower layer. Inlays of embossed metal bring out the gold, both on the surface of the egg as well as the golden legs, which have the shapes of lions and eagles.

This egg has a bracket for glasses as well as an embossed, gilded cap. It costs $2,500 to own.

Faberge recruited a Florentine master metal craftsman to create the Imperial Collection. This designer even worked for the Pope at the Vatican in Rome for over 30 years designing for the church. 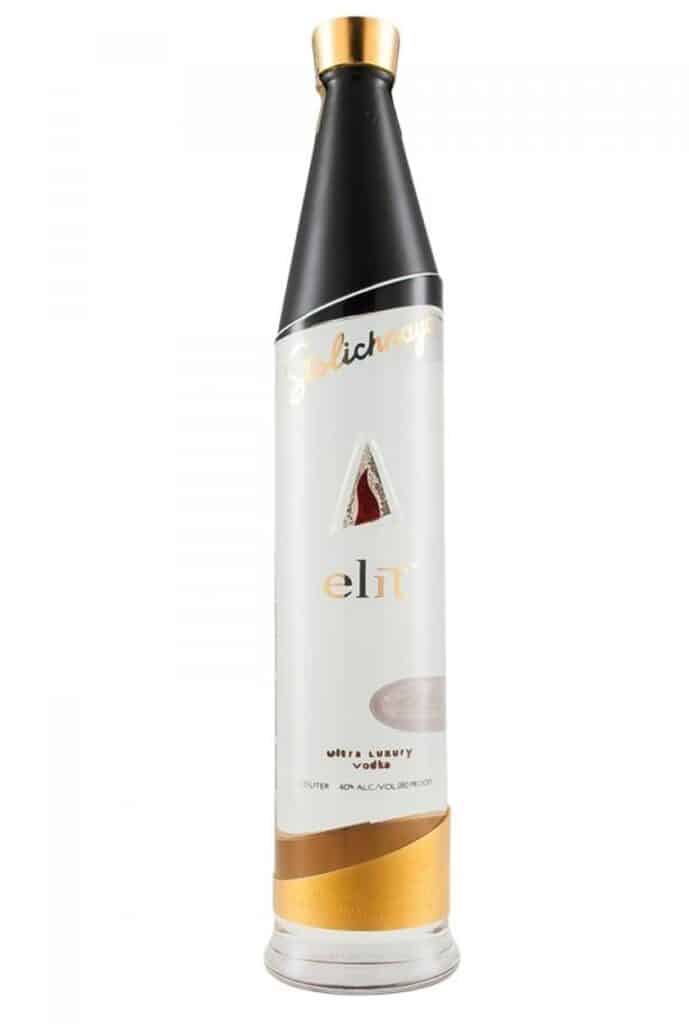 The Elit Himalaya Limited Edition Vodka, sold on Hedonism Wines, is from the venerated luxury vodka brand, Stolichnaya. They use freeze filtration to give their vodka the quality that the Russian reputation for vodka deserves, produced from a blend of wheat and rye grains.

They’ve been putting out bottles since the 1930s, not stopping even for Russia’s social and political upheavals during the last century. That has to be worth $5,207.01, right?

Stolichnaya was founded in 1938. Ten years later, they bought the Latvijas Balzams, a producer in Riga, Latvia, which still bottles the brand’s vodka to this day. They are also known as the first company to commercially sell flavored vodkas. The two originals were honey & herb and pepper. 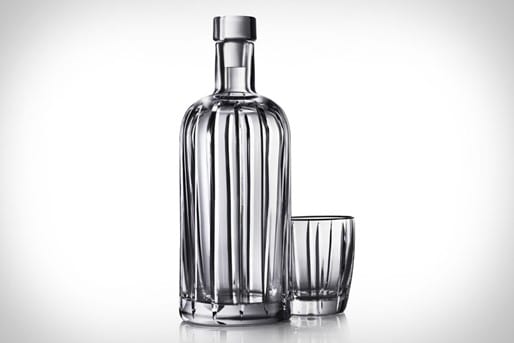 Absolut bottles, including this Crystal Pinstripe Black Bottle, are uniquely designed, hand-blown, and engraved, starting from the highest-quality crystal. Designers Magnus Skogsberg and Mimmi Smart source the crystal from a glassworks company called Reijmyre. This $10,000 bottle is limited in production to 10 bottles and ships in a handmade box with Absolut’s signature pinstripe fabric and matching tumblers.

The exclusive 10-edition black bottles are the company’s most exclusive product. Another Pinstripe bottle, limited to 800 units, can be bought for $1,650. 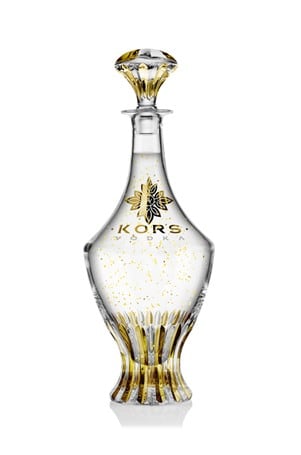 The limited-edition 24K Vodka by Kors Vodka sells for $24,500 a bottle. In this edition, known as the George V Edition, the handmade bottle shimmers with classy uniqueness – only 250 bottles were ever made.

The crystal bottle is detailed with gold and shipped in a box fashioned from polished walnut wood. The inside is velvet and silk, sprinkled with flakes of gold leaf on request. It should be noted that the bottle is a full liter, making it worth slightly less per ml than some of the smaller bottles on this list.

Kors is tightlipped about their distillation process with the 24K Vodka. But we do know it was distilled from triple-checked rye and wheat grains harvested from 12 different countries. It’s the same recipe – and presumably the same taste – as the vodka gifted to England’s King George V over 100 hundred years ago by Tsar Nicholas II of Russia, hence the name. 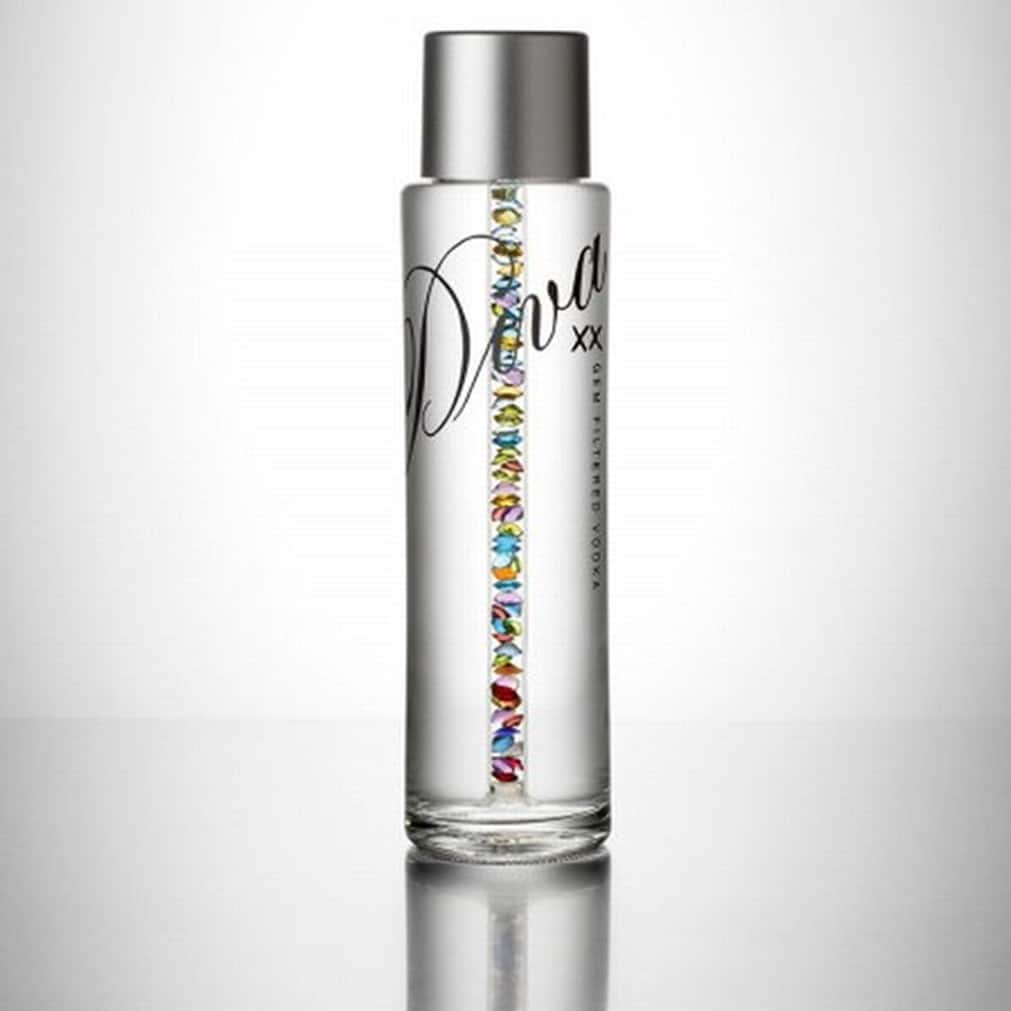 Diva vodka may not be the most expensive vodka in the world, but it’s self-described as the world’s most glamorous. We don’t know about that, but it makes a good argument in its defense. The vodka begins life as ice, filtered through charcoal made from Nordic birch. It is then re-filtered through sand studded with diamonds and other precious stones.

The Diva Vodka bottles also have a wand or stalk of Swavorski crystals running up the middle. This garnish, as well as the quality of the vodka, add up to a $1,000,000 price tag.

Swarovski is a glassmaker in Austria, family-owned since it was founded in 1895. Its glass crystals are uniformly structured to promote durability and beauty. They also produce jewelry, glass sculptures, chandeliers, and more. 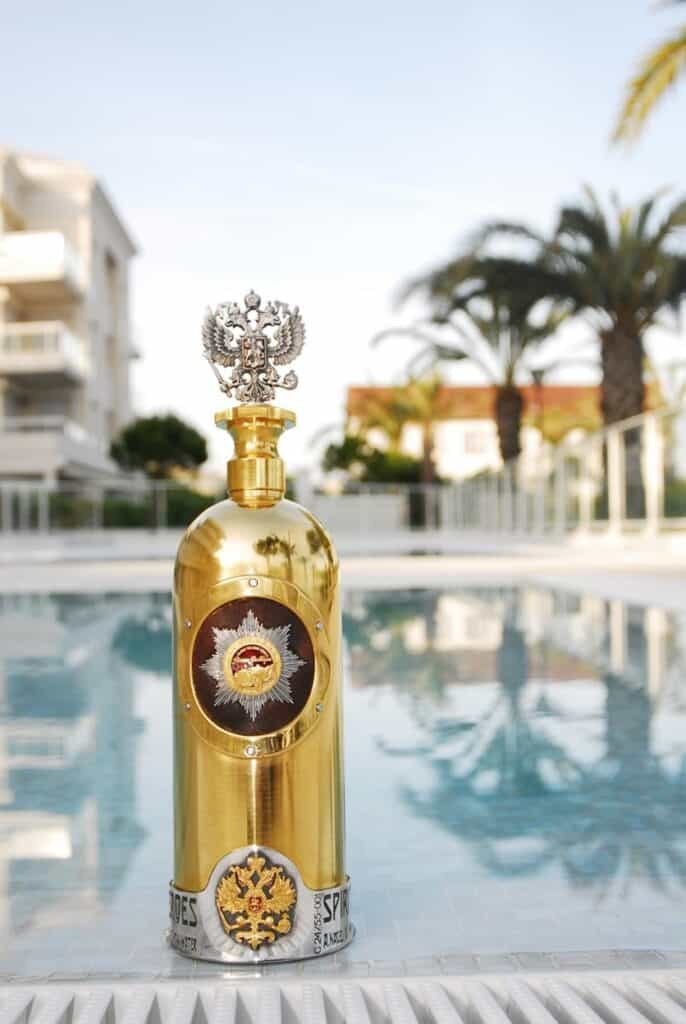 Russian vodka is known for its quality and its incredible variety. This Russo-Baltique variety was created by the DARTZ MotorZ car manufacturer, based in Russia. They created it to be the world’s most expensive vodka, priced at $1,300,000 per bottle.

This vodka premiered at Top Marques at the Grimaldi Forum 2009, which took place in Monaco. You may recognize the name of Prince Albert, who presented the vodka on television to a world of thirsty luxury vodka drinkers.

In season 3 of House of Cards, this vodka made its TV debut. Victor Petrov, the president of Russia on the show, presented it to Frank Underwood at a state dinner. 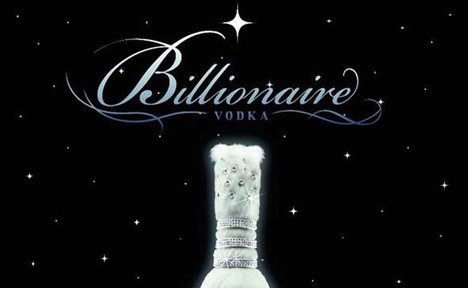 Billionaire Vodka’s slogan is “the most expensive vodka in the world …” though we will soon see that isn’t quite true. Still, the outrageous Billionaire Vodka, priced at $3.75 million per bottle, comes in at an impressive second place.

This triple-distilled vodka is made from water sourced from fresh springs around Caverswall Castle in England. The natural spring water there is known for healing, even mythic properties. The process of turning it into vodka sounds mythic on its own – it’s filtered through ice, then filtered through Nordic birch charcoal, and then finally filtered through crushed diamonds.

The bottle is encrusted with crystal and encased in Rhodium and Platinum. The foil seal is embedded with diamonds. Each bottle is individually numbered and is itself a coveted collector’s item. Buying one even comes with the 24-hour concierge service offered by Billionaire Vodka. 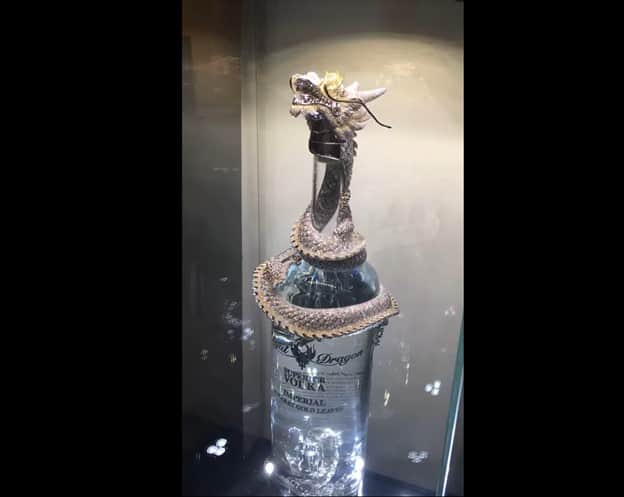 The most expensive vodka is The Eye of the Dragon Vodka. The brand Royal Dragon Vodka out of Hong Kong has been putting out luxury 80-proof specialty vodkas since 2012. Their vodka is known for mixing gold leaf in the drink for added luxury.

Many of their vodkas are expensive but none compares to Eye of the Dragon. This bottle is made from glass hand-blown into a dragon and encased in thousands of diamonds, draped with a pendant sculpted from 18-karat gold. Their small-batch vodka is an exclusive, five-time distilled spirit that sells for $5,500,000 per bottle.

Royal Dragon Vodka was created in 2012, which in China was the last year of the Water Dragon, something which only happens every 60 years. This actually recalls the history of the entire drink as the word “vodka” derived from “voda” to begin with, which means “water” in Eastern Slavic languages.

Some find Vodka delicious while others would describe the taste as closer to the world’s most powerful hand sanitizer. Either way, the most expensive vodkas in the world exist as luxuries, even as collector’s items, for the richest and most passionate purveyors of the drink.

Since the 1400s, vodka has been dulling stress and burning palettes, becoming something of a luxury for rich collectors in America and more or less the national drink of Russia. For these 8 bottles of vodka, some of which are worth millions and can only be specially ordered on request, you’ll have to do your share of digging deep to figure out if it’s worth it. If it is, you’ll be able to taste what vodka is like when sourced from the clearest natural waters on earth and triple distilled in sand studded with diamonds.