The modern keyboard got its start when typewriters were invented in 1867 by Christopher Latham Sholes. This groundbreaking invention wasn’t the first machine capable of printing text on paper, but it was the first practical typing machine in the world.

Later, in 1878, Sholes partnered with James Densmore to patent the QWERTY keyboard. This keyboard, named for the positioning of its keys, doesn’t have a well-documented development process — but some think it was designed to minimize the jamming that often plagued the typewriter’s mechanics.

Eventually, electricity joined the world of keyboards with the invention of electric typewriters. Although Thomas Edison made an early form of the electric typewriter in the 1870s, the new tech didn’t become practical until the 1900s.

By the 1950s, electric typewriters were popular in offices across America, so it was only a matter of time until computer-based keyboards became the norm. That shift toward modern keyboards happened in the late 90s when Apple released the first iMac — a game-changing computer that used a QWERTY keyboard.

Today, keyboards are everywhere. They’re usually pretty cheap, but some can cost an insane amount of money. Here are the top eight most expensive keyboards ever made. 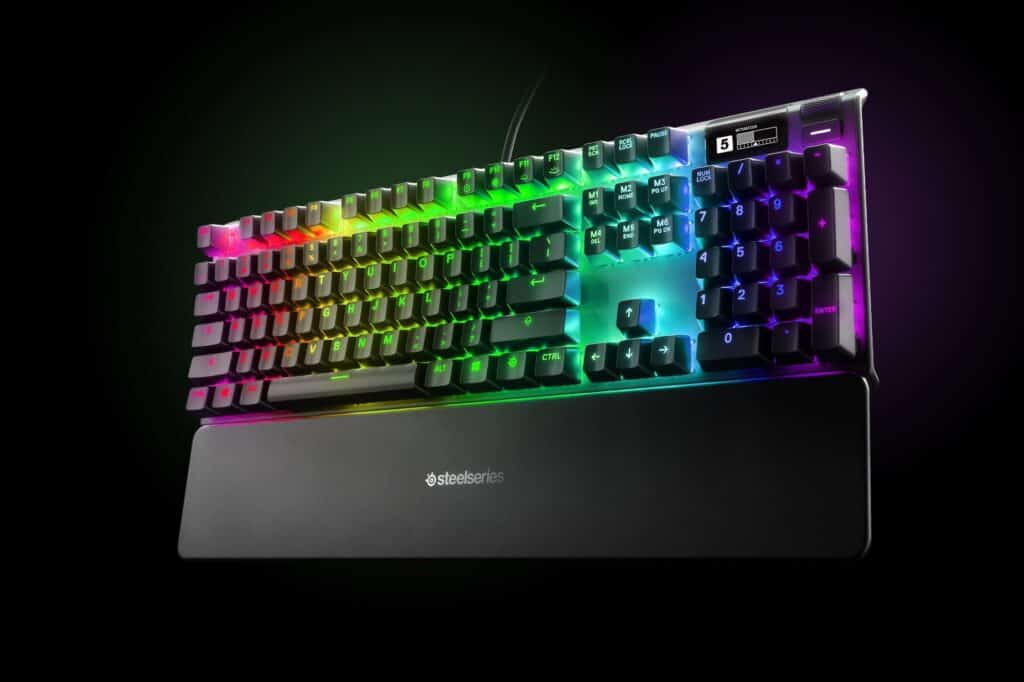 This expensive keyboard is notable for a few features. Mainly, the keys can be adjusted by the user to get a customized typing experience. The feature is targeted at gamers, who might need a specific amount of key travel while they play. In theory, this minimizes the risk of pressing a key without the computer recognizing the input.

The Apex pro also stands out for its RGB backlights, which give the keys a nice glow, and the OLED panel installed above the number pad. This OLED panel lets users do stuff like adjust key travel and change the keys’ backlighting — but it also includes a screen-saver feature that lets users display a custom image or GIF.

All those features sound pretty cool, and SteelSeries definitely makes you pay for them. With a typical price tag of nearly $200, this is a very expensive keyboard — but it’s nothing compared to other entries on this list.

The Apex Pro isn’t the only keyboard out there with a backlight. Interestingly, backlit keyboards have actually been around for a while. While their exact invention date is unknown, GE filed a patent for an early backlit keyboard in 1980. 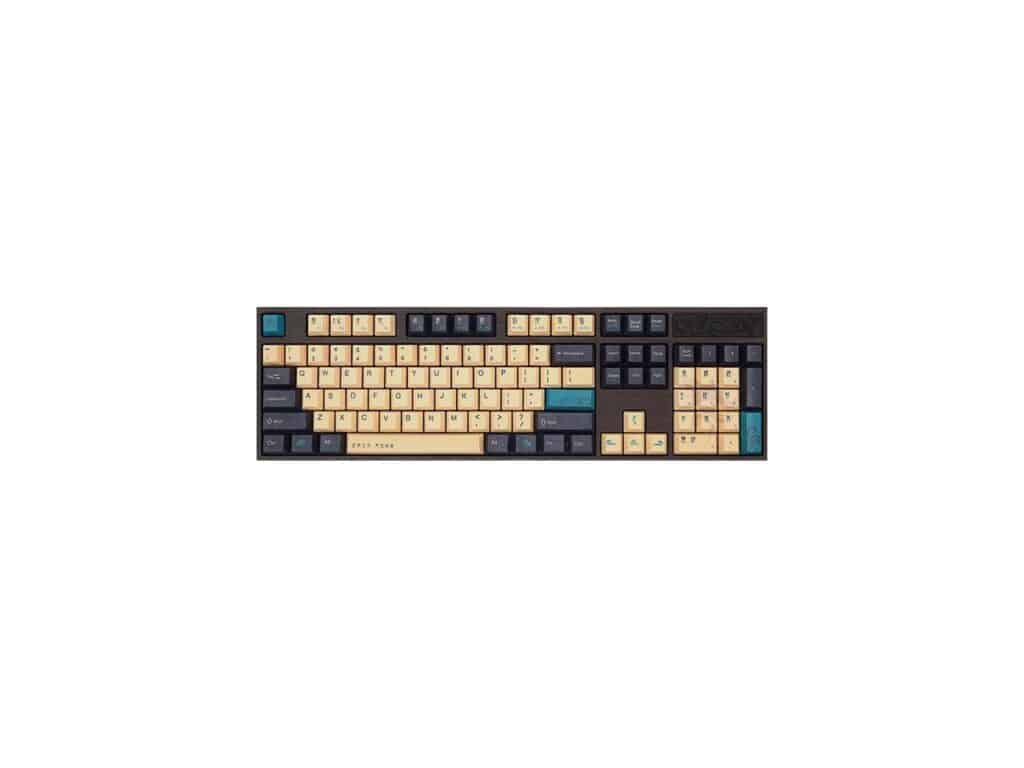 Prices start to climb with the Varmilo Dragon keyboard. This setup includes a unique dragon design and colorway spread across the keys that pay homage to the iconic Loong dragon of Chinese folklore.

At over $230, this keyboard is surprisingly simple. With a straightforward USB connection port and unchangeable white LED backlights, the Varmilo Dragon keyboard doesn’t have the most flashy tech out there. However, the keycaps are notable for their fabrication process: Using dye sublimation, the design is melted into the plastic, resulting in a durable, high-resolution image.

This keyboard has an actuation force of 45g, meaning the keys need 45 grams of force to activate. According to one publication, that’s the ideal setup for gamers.

This gold keyboard from Kirameki went for $359 when it debuted in 2008, but you might have trouble finding one today since they’re sold out at the original distributor.

The expensive keyboard is called “Pure Gold,” but it’s actually just coated with gold leaf. Beyond that, the keyboard has a pretty basic design: Buyers get two USB ports and a connector cable that can be attached at the left, right, or center of the setup.

Interestingly, despite how thin the layer of gold leaf is, buyers reportedly don’t need to worry about the shiny material rubbing away after use due to a special application process created by Wazakura Studios of Japan.

A lot of the marketing around this keyboard mentions Midas’ touch. This is referring to the legend of King Midas, a Greek myth that tells the story of a man who could turn anything to gold with a single touch. Interestingly, King Midas was actually a real person — even though his special power was certainly a myth. 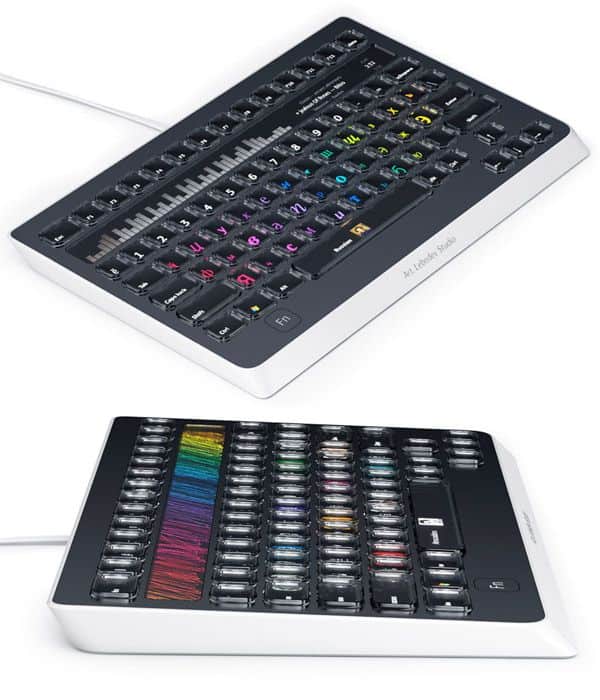 Things get really expensive with the Optimus Popularis keyboard. At over $1,000, the setup can easily cost more than some high-end computers. And what’s so special about this keyboard? The main draw is its customizable keys. But these aren’t just any customizable keys: The Popularis features mini-LCD screens on each keycap that can display any image or video. Plus, users can assign any key to any function — a truly customizable experience.

Amazingly, the Optimus Popularis doesn’t stop there. The keyboard also features a customizable display set above the keys, which can show anything from stock market info to email notifications.

Since the release of this keyboard in 2012, there’s been quite a bit of development in the world of customizable keyboard screens. Most notably, Apple introduced the Touch Bar in 2016, an OLED display strip that ran along the top of the MacBook Pro’s keyboard. 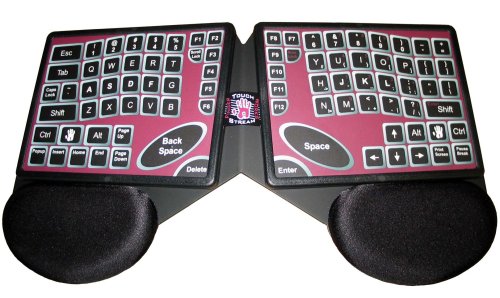 This expensive keyboard is a little strange. First, the website that used to sell it has a big health warning that tells users to watch out for “recurring discomfort, pain,” and “throbbing” while using the device. Second, the site says the keyboard has been discontinued, but the “last two unopened units sold for over” $1,500 each. So the keyboard has apparently become a collector’s item.

There’s also a YouTube video that just shows someone typing on the strange keyboard for over a minute straight. The video has 300,000+ views and more dislikes than likes — only adding to the confusion.

With such a strange internet presence, what does this keyboard offer? The setup actually includes a pretty cool blend of typing and scrolling functions. By using a variety of gestures, users can navigate their screen using the keyboard itself. However, the website that sold them says they had a “high return rate” when the product was still in stock.

When it was still sold, this keyboard was available with either a QWERTY or DVORAK layout. While QWERTY is the standard option among English speakers, DVORAK is an alternative meant to minimize strain while typing. 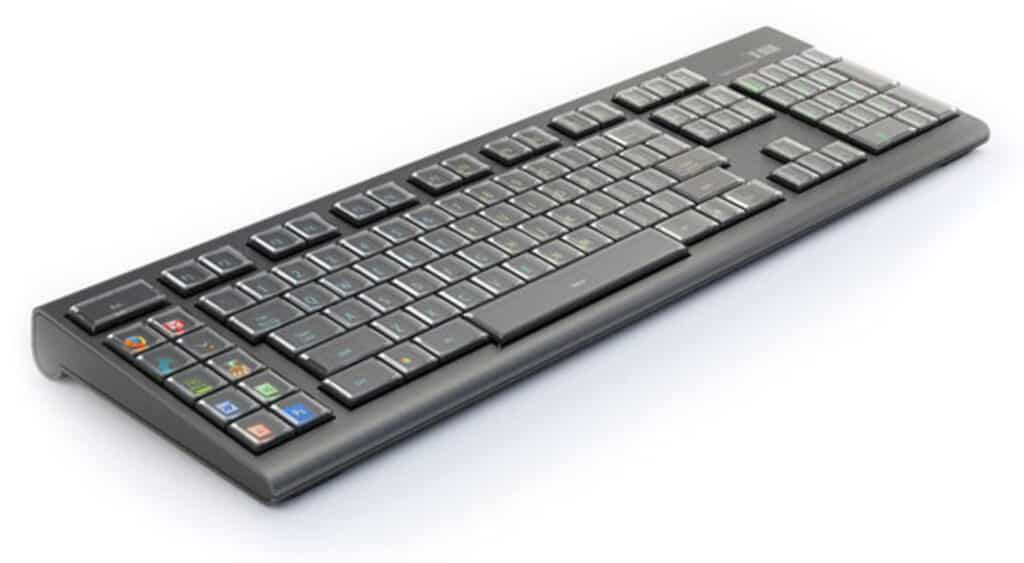 Here we have another entry from Optimus on the list. This time, the keyboard goes for an incredible $1,600. That price tag earned it the title “expensive novelty,” and it’s not hard to see why.

Released the same year as the Popularis (Optimus’s other expensive keyboard), the Maximus didn’t offer a whole lot beyond its upgraded OLED keys — and even those weren’t great apparently. As one review puts it, “The tightly packed keys make for lots of mistaken presses, and the mushy responsiveness slows down your words per minute.”

The OLED keycaps do offer some cool features, though. Notably, the system automatically syncs with Apple or Windows operating systems to include specific command buttons.

While the Popularis had LCD keycaps, this keyboard has OLED caps. What’s the difference? Mainly, OLED displays are controlled pixel-by-pixel while LCD displays are essentially “all or nothing.” As a result, OLED screens have better contrast. 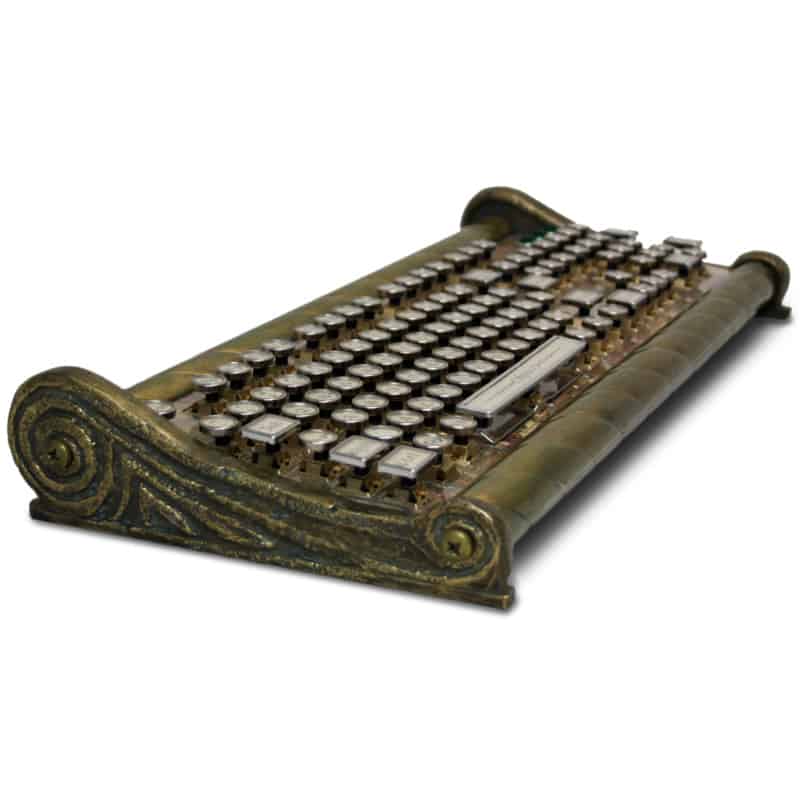 If you want an expensive, made-to-order keyboard, the Seafarer is for you. This unique keyboard features an antique design with a worn and “weather-beaten aesthetic.” With a name like Seafarer and such an eye-catching look, it’s not surprising that this keyboard is inspired by ocean vessels.

Beyond the aesthetic, the Seafarer offers mechanics rated for 50 million keystrokes and tactile features similar to vintage typewriters.

Perhaps the most intriguing feature of this unique keyboard is the antique map print featured behind the keys. This design was taken from the archives of Peter Schenk — a historic cartographer born in 1660 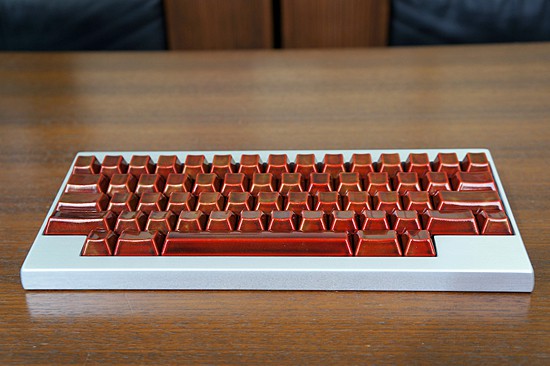 Happy Hacking Keyboard is the most expensive keyboard ever made.

This keyboard was officially recognized as the most expensive ever made by Guinness World Records. Going for an incredible $4,240, the setup features gold-dusted keys which are hand-painted with Urushi lacquer — a Japanese material that’s been around for over 7,000 years.

The keyboard itself looks pretty standard, but the keys don’t have any characters printed on them and their eye-catching color makes the design stand out.

While Happy Hacking has been making keyboards for decades, this special edition was released in 2006 to commemorate the brand’s 10th anniversary.