While many restaurants sell expensive single dishes as promotional items, restaurants with regular, outrageously expensive menus have to back up their prices with sheer quality. So there are no gold-flecked truffle pizzas here.

Instead, this list is a celebration of the richest, most decadently prepared restaurant menus in the world. The priciest places usually have set menus prepared by their celebrity chefs for their exclusive, limited diners. Here are the 8 most expensive restaurants in the world. 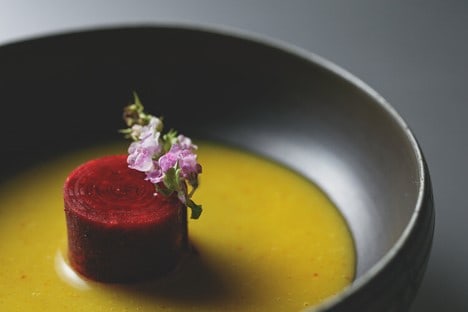 Some of the restaurant’s most famed dishes include seemingly simple dishes like scalloped pichoune, a charred arctic char, and others that are multi-ingredient masterpieces. These include a Maui Nui poké musubi nui that includes venison, kukui nut, poi, seaweed haupia, banana chutney, and black bread. 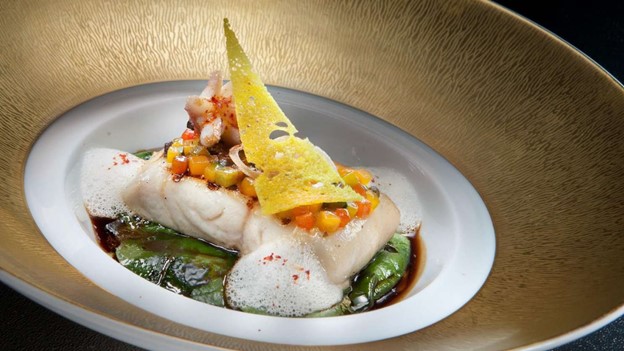 Joël Robuchon is a French restaurant in Las Vegas, Nevada with three Michelin stars. It has won the Grand Award from Wine Spectator, the Forbes Five Star, and the AAA Five Diamond. The restaurant offers a 16-course meal for $425 per person from their gorgeous Parisian Terrace.

Its most famous dishes include guinea hen served with roasted foie gras and a langoustine ravioli (they’re like large, delicate, sweet shrimp). Their most popular meal is fewer courses and costs $120 per person – the same luxurious attention to detail without breaking the bank quite as much.

Robuchon is one of the most acclaimed chefs in the world. The menu he has created at this Art Deco-designed restaurant, complete with a glittering 1920s lounge, is what is known as a degustation menu. It means that you won’t be getting full on a large restaurant-sized dish. Instead, you’ll be tasting small, expertly crafted bites. 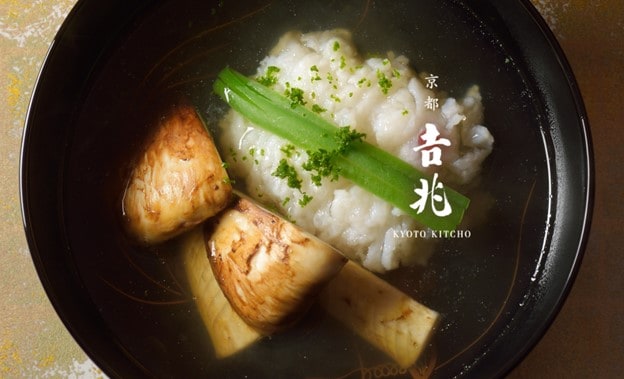 Kitcho in Kyoto, Japan offers traditional décor that celebrates the Hideyoshi family, which ruled Japan around the late 1500s. The style of that era and family largely influenced the look of Kitcho. They even present an authentic tea ceremony upscaled with modern appetizers, complete with sake and fresh shrimp, abalone, and sliced radish served in seashells.

They serve menus at different prices, the most expensive of which costs 60,000 JPY, which is the equivalent of about $529. It includes sashimi, steamed pickles, fruit, and more.

That testing menu may not even be the most expensive at Kitcho. The chef offers an omakase menu as well, which allows the chef to decide what you will eat. This experience takes place right in your private eating room and includes as many as 12 courses of “savory special,” appetizers, soup, sashimi, and more. The price of this menu changes based on the local market prices at the time.

The French Laundry serves both French and Californian cuisine out of Yountville, California. The restaurant is helmed by Thomas Keller, the famed restauranteur. This 3-Michelin star restaurant has been operating since 1978. The building, however, has been around since 1900 (originally, it was a saloon).

Keller’s restaurant serves two tasting menus with nine courses each (one normal menu, and one vegetarian option). These cost $350 per person. That’s not what we’re talking about here.

An even more exclusive menu is served for $850 per person for parties of up to eight diners at the restaurant’s most exclusive table.

This incredible meal consists of truffles, foie gras, Regiis Ova caviar, wagyu beef, canapes, and all topped off by a bottle of 2006 Dom Perignon champagne. The champagne alone is valued at over $200. 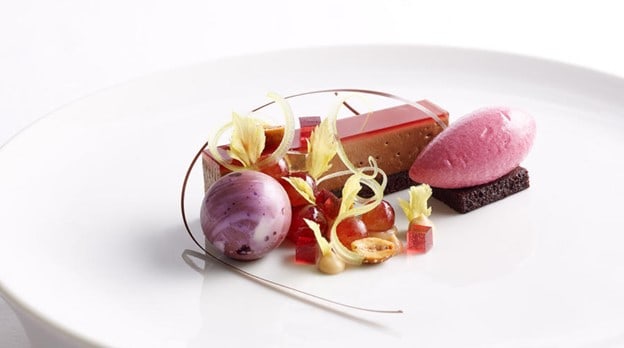 Per Se in New York City (from Latin for “by itself”) has a decadent dining room in New York’s Time Warner Center overlooking Central Park. Per Se offers two tasting menus per day. The first is a nine-course menu chosen by the chef and the second is a vegetarian option. The allure of the meal is that there isn’t a single ingredient anywhere in the meal that repeats between courses.

This is the last time Thomas Keller will appear on this list, after giving us some of the most expensive restaurants in the world. This French chef has won Outstanding Chef through the James Beard Foundation, Chef of the Year by The Culinary Institute of America, and he even led the team that won the first gold medal of the Bocuse d’Or, which is the equivalent of the Olympics in culinary. 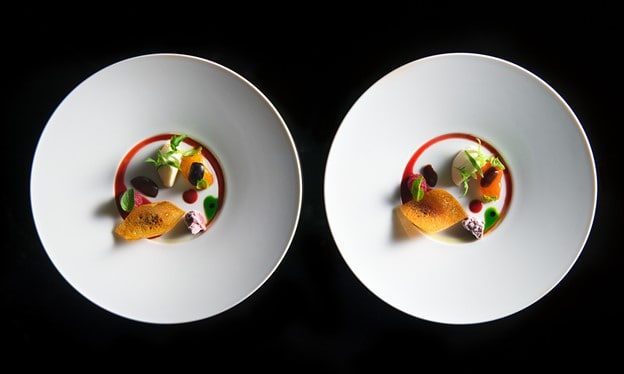 Ultraviolet in Shanghai, China claims to be the original “gastro-sensory” experience, which means that it uses avant-garde displays using light and sound to enhance its refined yet cutting-edge food preparations. It argues this fact with later entries into the luxury gastro-sensory industry, as we’ll see a little later on this list.

Regardless, since 2012, chef Paul Pairet has brought his French cooking experience and instinct for the avant-garde to bear on the projections, lighting, and taste of Ultraviolet. His meal includes 20 courses, a paired luxury drink, and has to be tasted to be believed. It costs $860 per person to do so.

The technology of the dining rooms projects different lights and sounds to “enhance” the experience of each flavor offered in each course of the meal. To pull off this effect, the restaurant is designed as an aesthetic vacuum with no decorations, paintings, or views to distract from the experience of the light and sound. 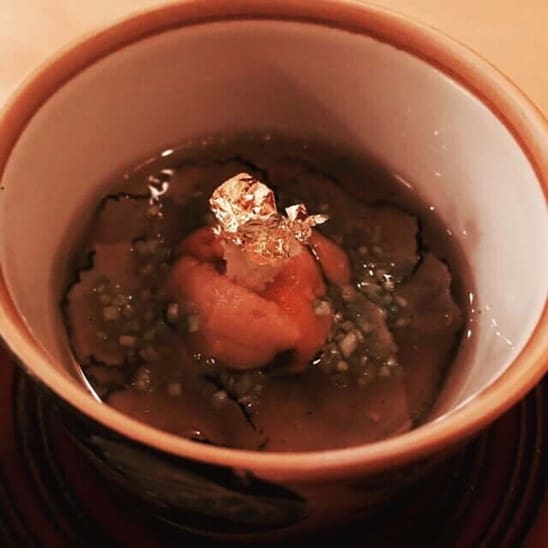 Urasawa is your window into Japan in Beverly Hills. This exclusive restaurant can handle 10 exclusive diners a night to omakase master Hiroyuki Urasawa’s incredible 30-course menu. This restaurant is located in the spot that used to contain the restaurant, Ginza Sushi-ko, where Masa Takayama started. This Masa, who has an expensive restaurant of his own, even trained Urasawa in this exclusive cuisine.

This restaurant’s menu changes every day. To experience its 30-course majesty will cost you $1,111 per person.

“Omakase” is a Japanese term used to order food in restaurants by leaving the decision of the menu up to the chef. Urasawa is only omakase, meaning Takayama chooses the entrees every night. In Japanese, it means “I’ll leave it up to you.”

Remember the final line of Pixar’s Ratatouille when Anton Ego tells Remy, “Surprise me?” He could have said, “Omakase!” 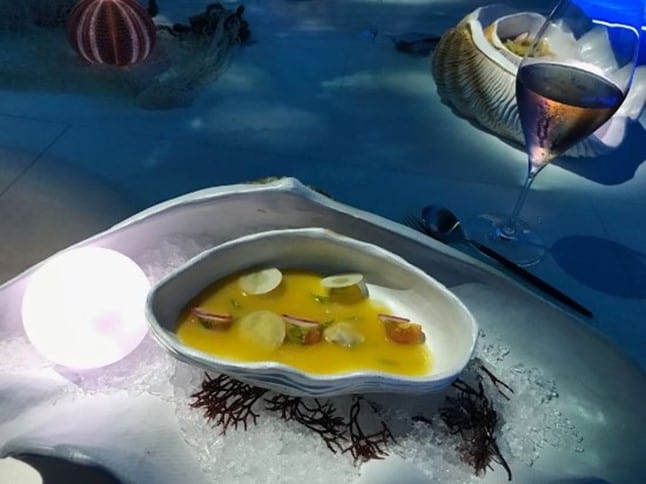 The most expensive restaurant in the world is Sublimotion. It stands in the city of Sant Josep de sa Talaia on the island of Ibiza in the Mediterranean off the coast of Spain. The restaurant is known for innovations in gastronomy headed by Paco Roncero, the restaurant’s 2-star chef, who is a well-known molecular gastronomist. This means his cooking incorporates chemistry and physics to create new techniques.

Sublimotion in the Hard Rock Hotel puts out a 20-course tasting menu that can receive 12 eaters at once, maximum. Dinner includes a show of lights and color and scenery. They call this a “gastro-sensory” experience, which costs $2,078 per person.

After dinner, patrons can hang out with each other in an open bar on the restaurant’s private terrace. The chef Paul Pairet criticized Sublimotion for copying his restaurant, Ultraviolet, our #3 pick, which uses a similar “gastro-sensory” concept. Particularly, he disputes Sublimotion’s claim of being the “first” restaurant of this kind.

Either way, these are the most expensive restaurants in the world, reserved only for the most mind-blowing food anywhere.