Tesla was founded in 2003 by two American entrepreneurs: Martin Eberhard and Marc Tarpenning. The company was named after Nikola Tesla, an inventor who pioneered the production and transmission of electricity.

In 2004, Elon Musk joined the Tesla company after investing over $30 million in Martin and Marc’s venture. Elon amassed that huge investment after co-founding PayPal.

Eventually, Tesla released its first electric car in 2008. The vehicle was a success, reaching 245 miles on a single charge. The first Tesla vehicle featured a carbon fiber body and earned efficiency ratings far better than gas-powered cars, hitting the equivalent of 135 miles per gallon.

Although the first Tesla vehicle was a technical success, the ride had a price tag of over $100,000 — making it inaccessible to a lot of people. But the company finally entered a wider market when the production of a $35,000 Tesla vehicle started in 2017.

That lower price didn’t mean Teslas would stay cheap though. Today, some Teslas cost more than $100,000.

Here are the top eight most expensive Teslas ever made. 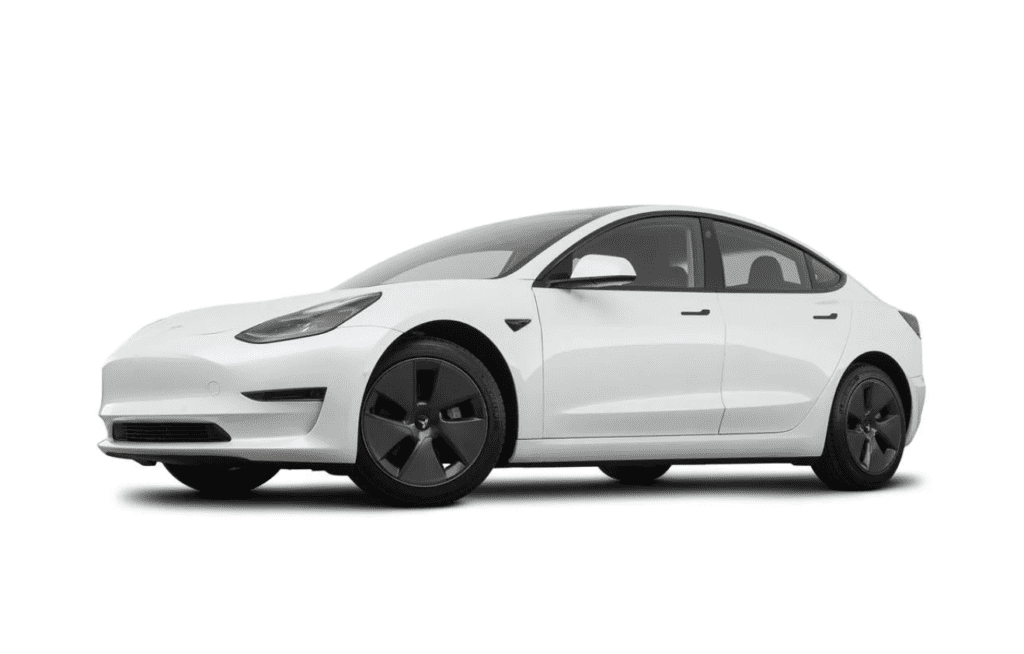 The Tesla Model 3 has been one of the most popular electric vehicles for years. Since its debut in 2017, the battery-powered car has become the best-selling electric vehicle of all time — with more than 1,000,000 Model 3s selling within just three years of starting production.

The 2021 Model 3 is probably most enticing for its range. On a single charge, the car can travel about 250 miles. That’s a pretty big jump from the original Model 3 which traveled around 215 miles per charge.

When the first Model 3 was announced in 2016, there was a lot of discussion about its price — and not because it was expensive. The vehicle was set to go for $35,000, and while that’s not cheap, it was way less than other battery-powered cars of the time. 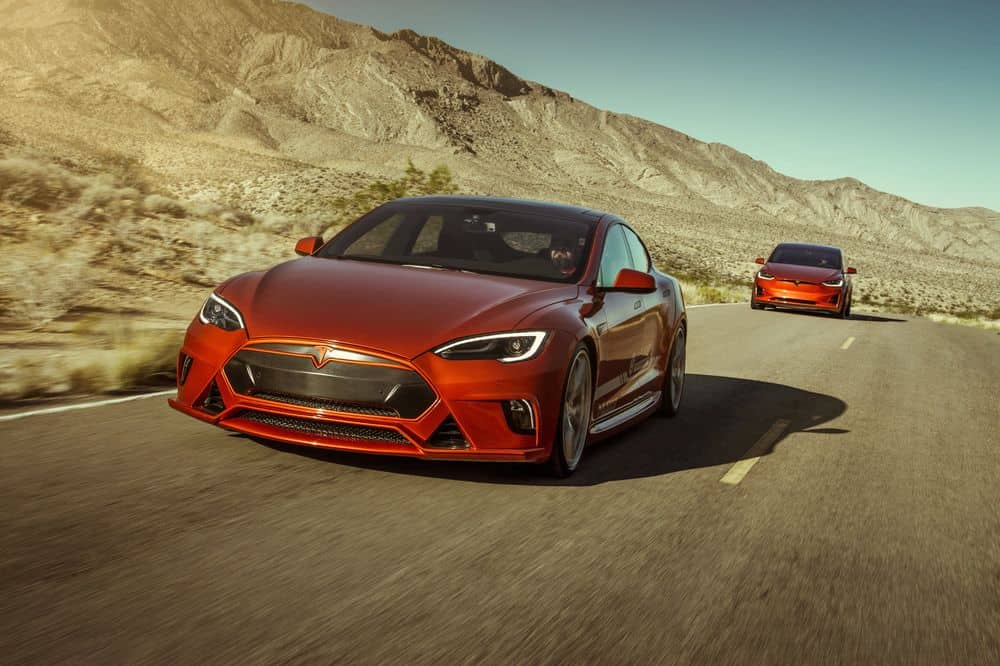 For $50,000, Unplugged Performance will tune your Tesla to maximize speed and performance. On a Model 3, the company’s tuning will reportedly decrease drag by more than 6%.

The expensive alterations can make the relatively cheap Model 3 pass the $100,000 mark — but Unplugged Performance says they’ll give buyers high-performance carbon fiber wheels and other expensive upgrades, so maybe it’s worth it.

If you’re looking for a cheaper upgrade, Unplugged Performance offers a $35,000 package with fewer bells and whistles.

If you tune a Tesla with Unplugged Performance, Tesla’s original warranty will no longer be effective. However, Unplugged offers its own warranty system. 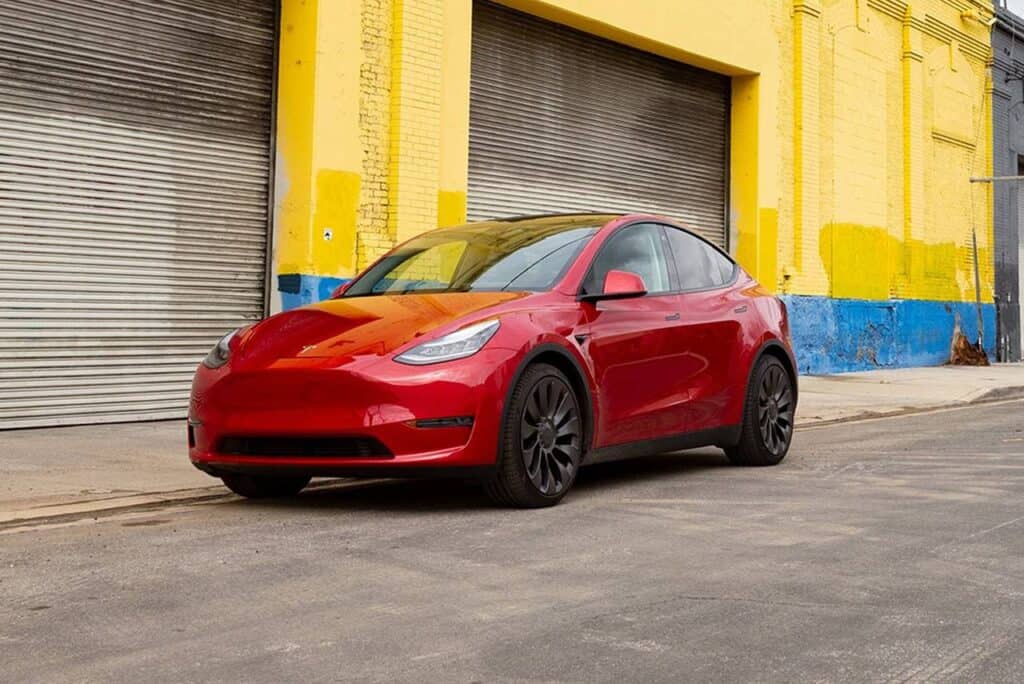 The 2021 Tesla Model Y is a small SUV, but in comparison to the Model 3, this Tesla gives drivers more space and storage areas. The vehicle goes further too. On a single charge, the Model Y offers an incredible 300+ miles of range.

Interestingly, the Model Y features a touch screen control system to manage most of the electric vehicle’s functions. Meanwhile, the SUV’s battery provides enough power to reach 60 mph in less than five seconds.

With a base price of $54,990, the Model Y is definitely an expensive ride.

One of the Model Y’s most high-tech features is the voice control system. With a simple voice command, drivers can change the car’s temperature, make a phone call, and more. 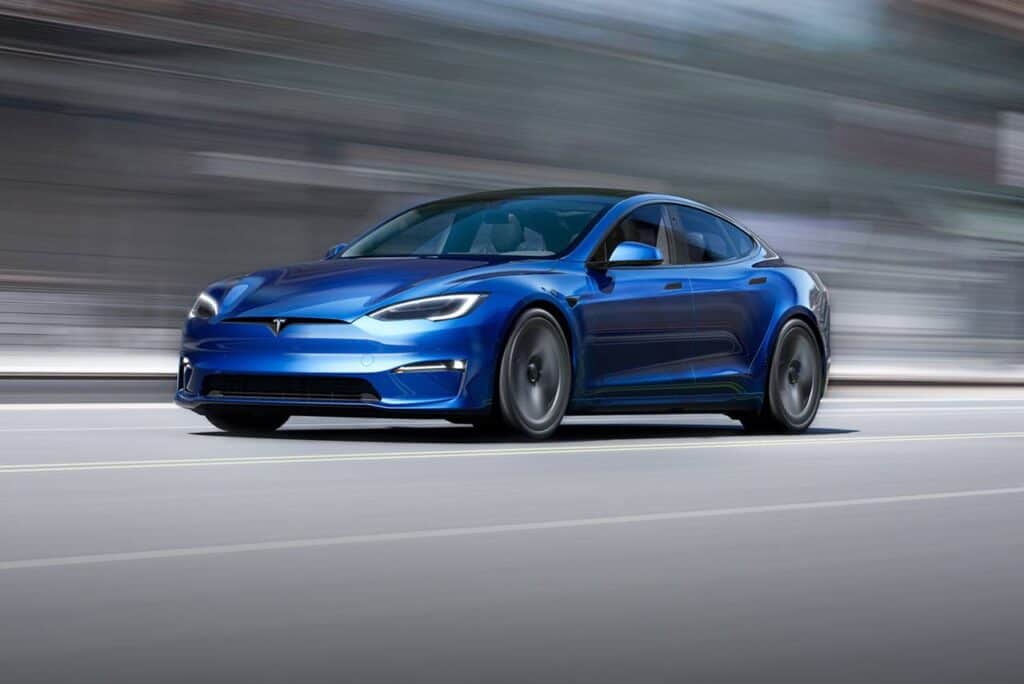 If you’re looking for a fast Tesla, the Model Y is a good option. The vehicle hits 60 mph in just two seconds and features a range of about 400 miles per charge. Drivers have to pay for that speed though. The sedan has a base price of nearly $90,000 — but that price tag can climb past $120,000 if you add any upgrades.

Like other vehicles from Tesla, the Model Y offers some pretty cool tech. Beyond a 17-inch touch screen control panel, the electric vehicle features a 22-speaker surround-sound system and an advanced autopilot option.

Phone chargers might not be the first thing you get excited about when it comes to luxury vehicles, but the Model Y features a nice addition of several wireless charging pads. 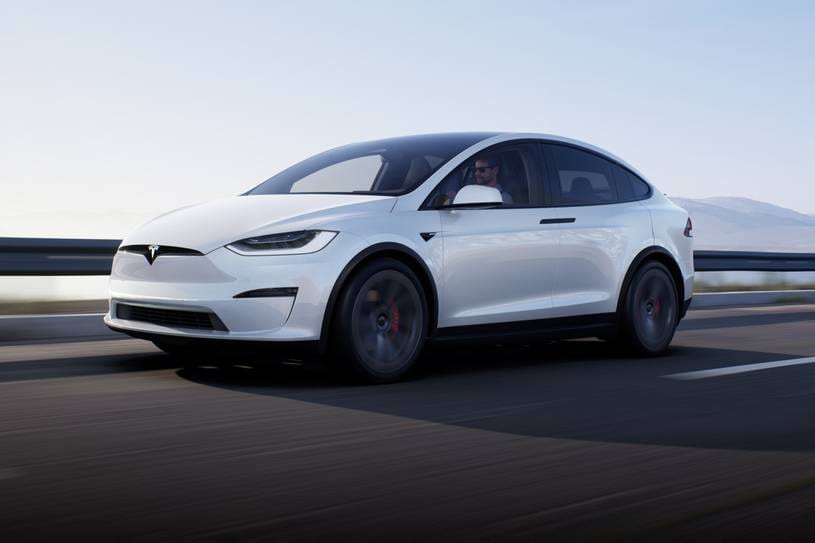 The 2021 Tesla Model X offers an impressive 360-mile range and several tech features like autopilot. The car also includes a lane-centering system that keeps the car in line as it cruises.

The most unique feature of the Model X is probably the vehicle’s automatic door-opening system. In the front, the driver’s door opens and closes automatically. In the back, the doors open like wings (a design known as gull-wing doors).

With those high-tech features, the Model X boasts a staggering price tag of at least $99,990. Incredibly, a few upgrades bring the price to nearly $120,000.

The Model X has some slick tech, but the vehicle also features an extra-large windshield. This simple edition gives riders some pretty incredible panoramic views. 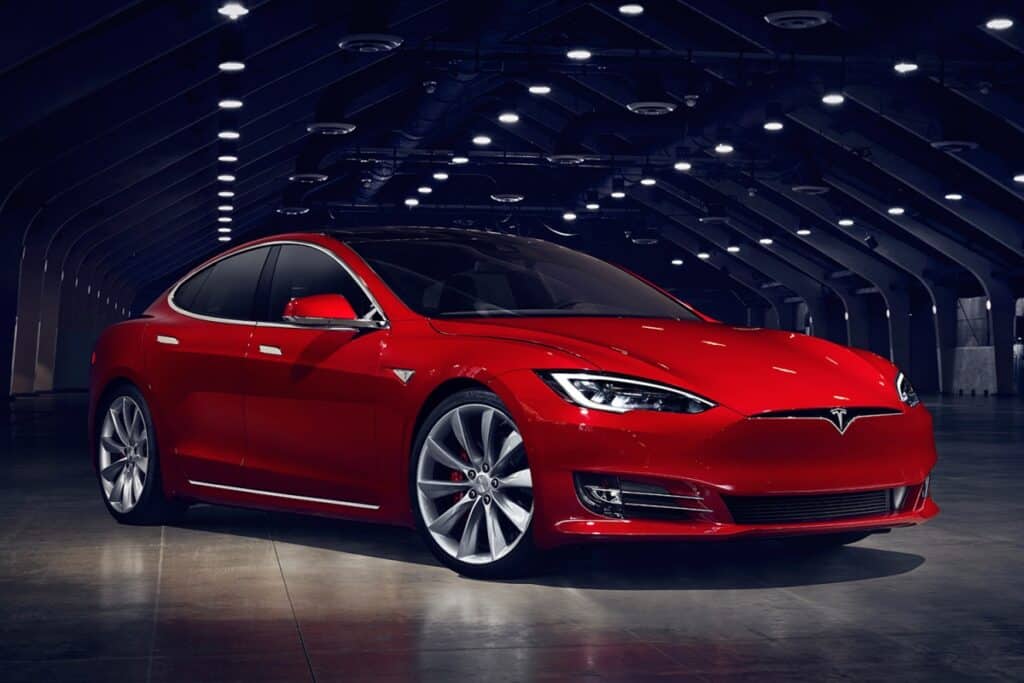 The Tesla Model S Plaid is a special edition of the standard Model S. This upgraded vehicle amps up the power of the standard S to push the vehicle from 0 to 60 mph in less than two seconds — crazy fast.

For this higher-end version, buyers face a price tag of at least $139,990. But like other Teslas, that price can go even higher after some upgrades.

Interestingly, Elon Musk (the CEO of Tesla) was apparently more interested in making this fast vehicle extra comfortable. Although the vehicle can maintain a crazy fast speed of 200 mph, Tesla pushed the idea that the car will offer a smooth ride — unlike some other fast vehicles.

The Model S Plaid is reportedly named after an obscure reference to the movie Spaceballs. 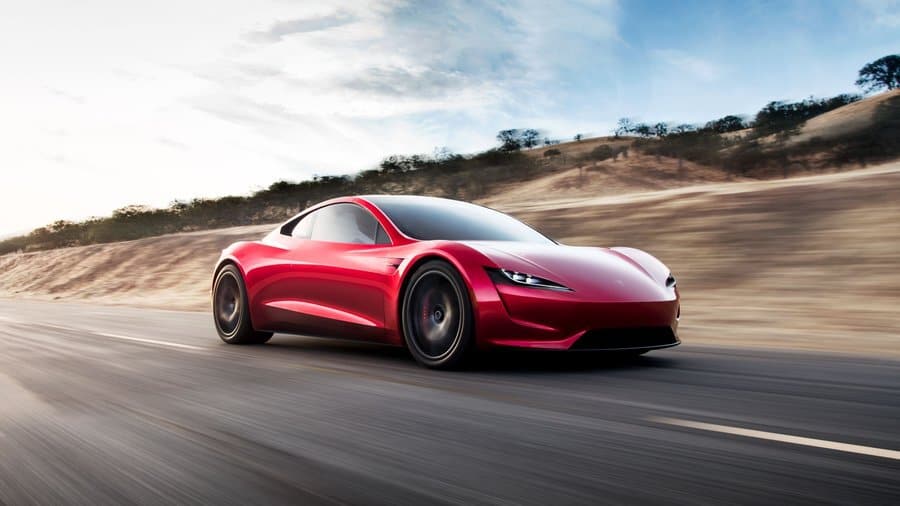 As Tesla keeps making more and more expensive vehicles, the Roadster marks the company’s first car to shoot past $200,000. The ultra-expensive Roadster debuted with the Founders Series, a set of just 1,000 vehicles available for purchase online.

The Tesla Roadster can reportedly hit 100 mph in less than five seconds and offers top speeds of more than 250 mph. That’s partly thanks to the car’s 7,376 lb-ft of torque, but the vehicle’s sleek design helps too.

As if the Roadster isn’t impressive enough, the vehicle could hypothetically hover once it debuts in 2023. In 2019, Elon Musk tweeted that the Roadster “will actually do something like this” in reference to a GIF of a floating car. 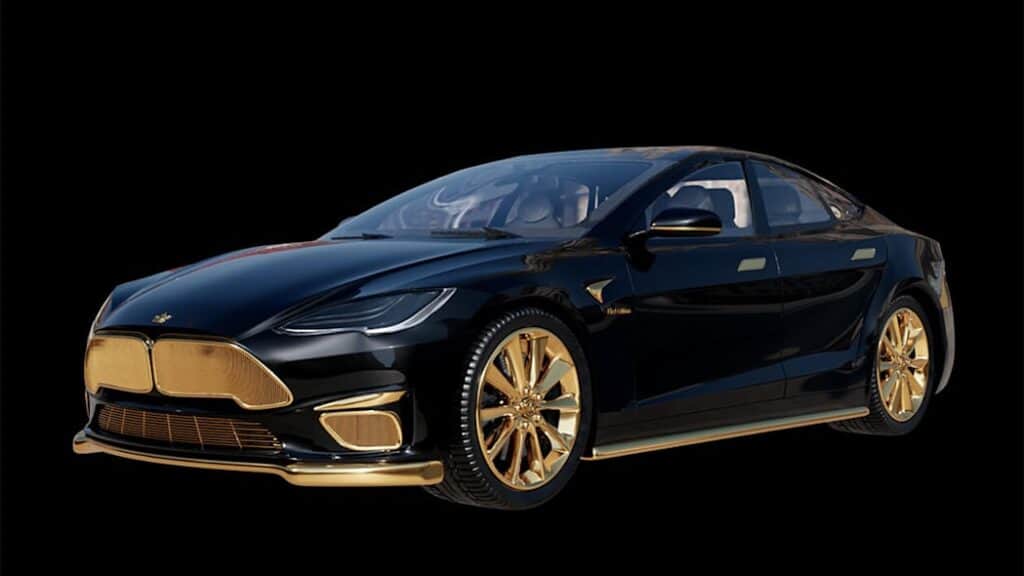 The brand Caviar has been making luxury modifications to iPhones and other expensive products for years. With a ton of gold details, the brand offers a $42,380 18 carat gold iPhone, a $320,000 Playstation 5 mod, and a Tesla S Plaid that’s been covered in gold.

This gold-plated Tesla sells for nearly $300,000 and features details like a custom grille. The gold Caviar used comes in at a staggering 24 carats — the purest gold available.

Other offerings from Caviar include blue AirPods stamped with the Caviar logo and a $3,220 bust of Elon Musk made of aluminum taken from a Tesla Model 3.

Only 99 of these expensive Teslas were made.

10 Most Expensive and Rarest Converse Shoes Ever