Tennis shoes, sneakers, tennies… there are a whole bunch of words used to describe “athletic shoes.” In the U.S., “sneakers” and “tennis shoes” are split, with about 45% of people calling them sneakers and just over 41% saying tennis shoes.

Whatever you call them, tennis shoes have been around for a while. In Britain, the oldest word for a rubber-soled shoe designed for athletics dates back to the 1600s. In the U.S., Keds were released in the early 1900s and quickly became a popular shoe for tennis players.

Today, similar designs are still called “tennis shoes,” but they’re used for everything from casual wear to professional running.

Interestingly, the history of tennies is closely linked to the history of rubber. Charles Goodyear started making vulcanized rubber in the late 1830s, a process that made rubber more durable and heat resistant. Other people realized the potential of vulcanized rubber and started using it to create better shoes, and thus the rubber-soled tennis shoe was born.

Tennies are the standard shoe in many parts of the world. They’re not usually too expensive, but some tennis shoes sell for thousands of dollars.

Keep reading to learn more about the world of expensive tennis shoes! 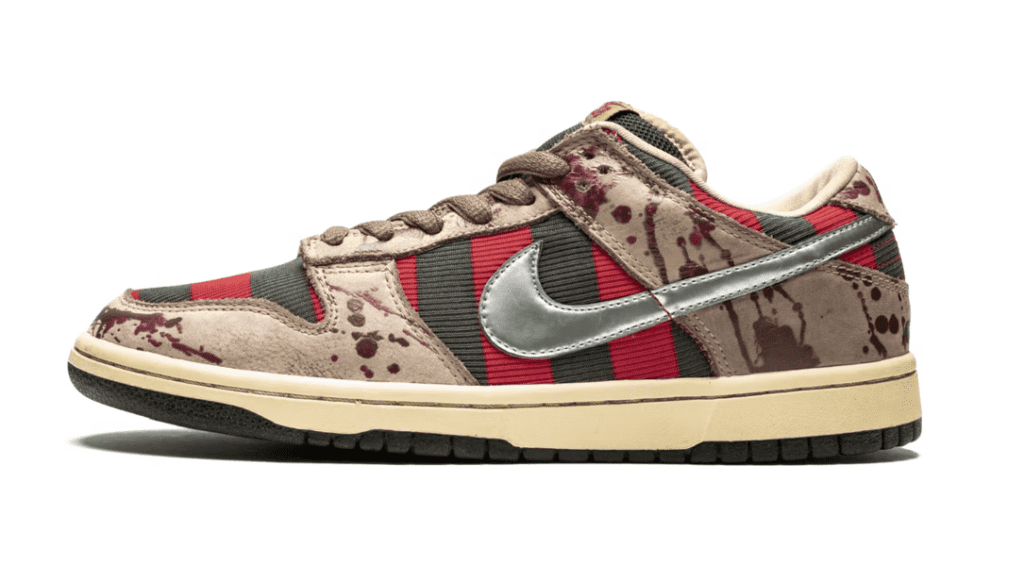 In 2007, Nike started sending a series of horror-themed shoes to retailers. Among other titles, one of the designs was inspired by Freddy Krueger from the “Nightmare on Elm Street” film series.

Sounds cool, right? New Line Cinema didn’t think so. The production company owns the rights to “Nightmare on Elm Street,” and they weren’t happy about Nike’s shoes. For some reason, the shoe company didn’t get legal permission to feature Krueger, and New Line Cinema quickly sent a cease and desist letter.

As a result, not many Nike Freddy Kruegers were produced and very few were sold to the public. Now, like the film franchise, the Kruegers are a cult classic among sneakerheads. Estimates peg their value at about $25,000, making them some of the priciest tennis shoes on the market.

In 2021, a local shoe store was burglarized and two pairs of Kruegers were stolen. The store owner says he paid $50,000 for the rare kicks.

Approximate Value: $25,000
Shoe Design Year: 2014
Reason for Value: Only 23 were made
Interesting Fact: These shoes were part of a pair of designs made for Macklemore 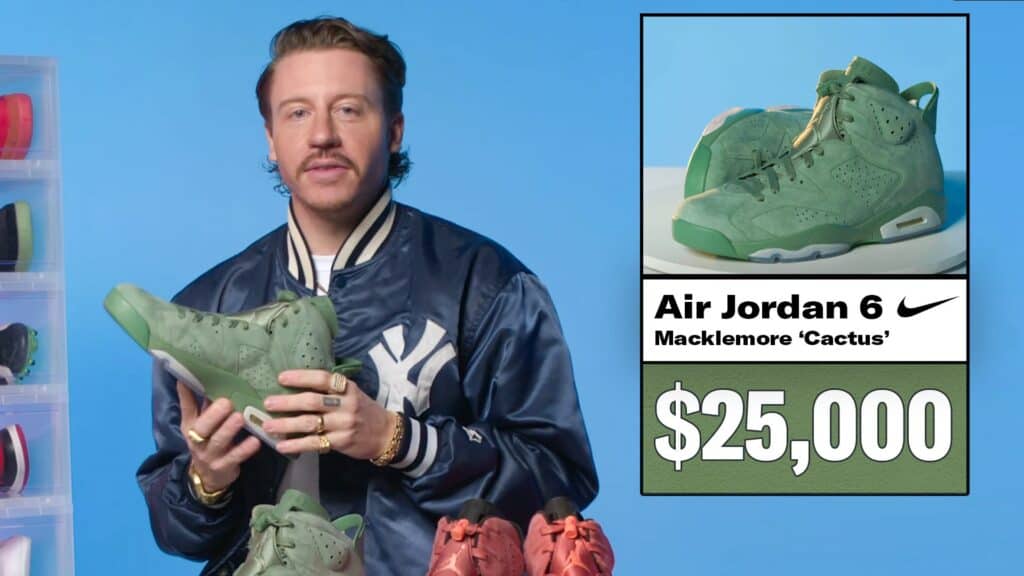 In 2014, Macklemore got a pretty cool gift from Nike: custom Air Jordans. In fact, he got two custom designs, including this pair called Cactus. Just 23 pairs were made in total, and they were given exclusively to Macklemore for his personal collection. The Grammy-winner says he always admired Air Jordans, “I have a nostalgia, a connection to the past with Jordans…My collaboration with Jordan ranks with all of the amazing things that I have done.”

Although these shoes aren’t available for general sale, each pair is valued at an estimated $25,000. That makes them some of the most expensive tennis shoes ever.

Macklemore’s other custom Jordans are also named after their color: A tannish-red named Clay.

Approximate Value: $25,200
Shoe Design Year: 2005
Reason for Value: Signed by the designer
Interesting Fact: These shoes were inspired by pigeons 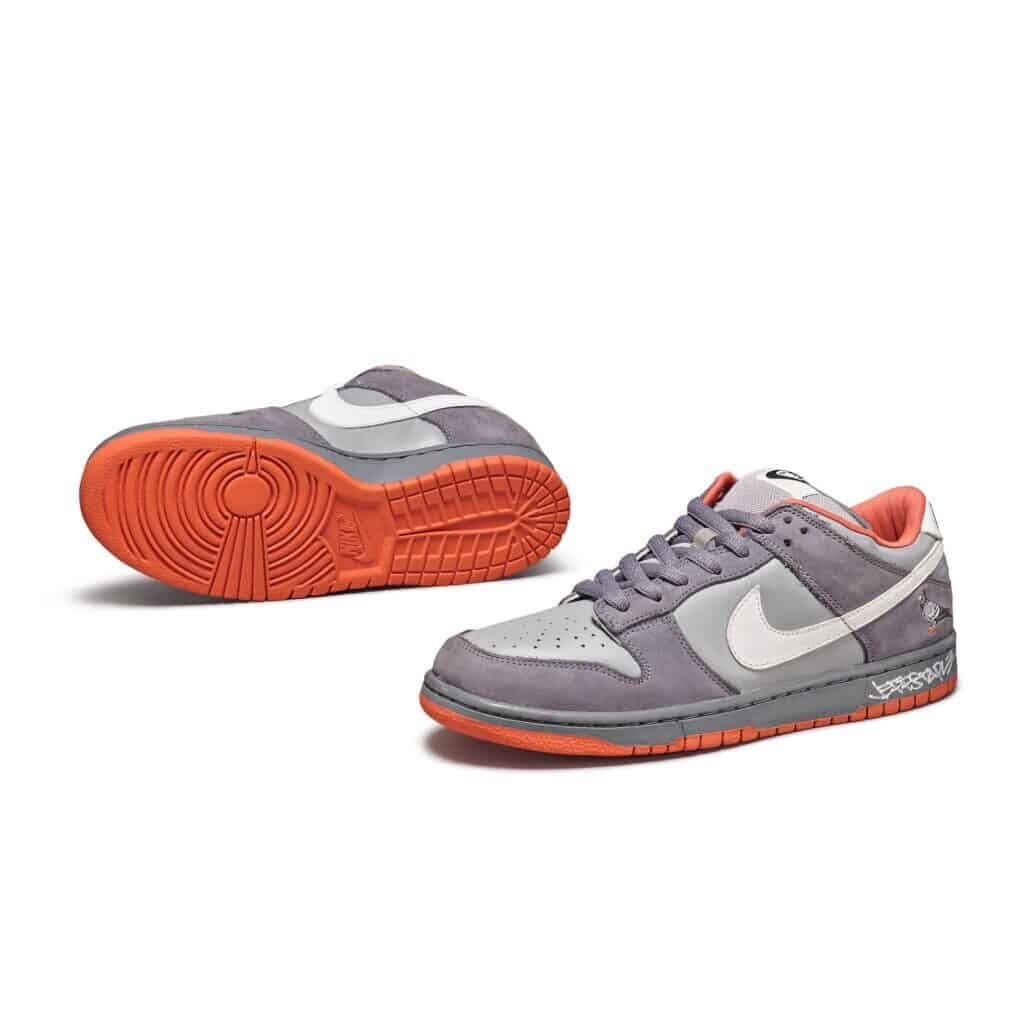 In 2005, Nike released shoes designed by Jeff Staple — and people freaked out.

A huge line formed outside Staple’s storefront in New York City, with countless streetwear enthusiasts hoping to get their hands on a pair of the limited-edition shoes known as Pigeons. The crowd got so big that the police were recruited to keep things under control and ensure anyone lucky enough to buy a pair got home safely. Only about 150 pairs were made, so those lucky buyers could probably use some security.

Years after the release, Sotheby’s auction house sold an extra special pair of Pigeons. The one-of-a-kind set was signed by none other than Jeff Staple himself, earning them a final bid of more than $25,000.

Jeff Staple was inspired by pigeons when he made these shoes. As Sotheby’s puts it, “The design itself is inspired by the ubiquitous NYC pigeon,” the perfect way to show some love to New York streetwear styles.

Approximate Value: $41,000
Shoe Design Year: 2009
Reason for Value: Less than 40 pairs were made
Interesting Fact: These shoes were made in collaboration with Concepts 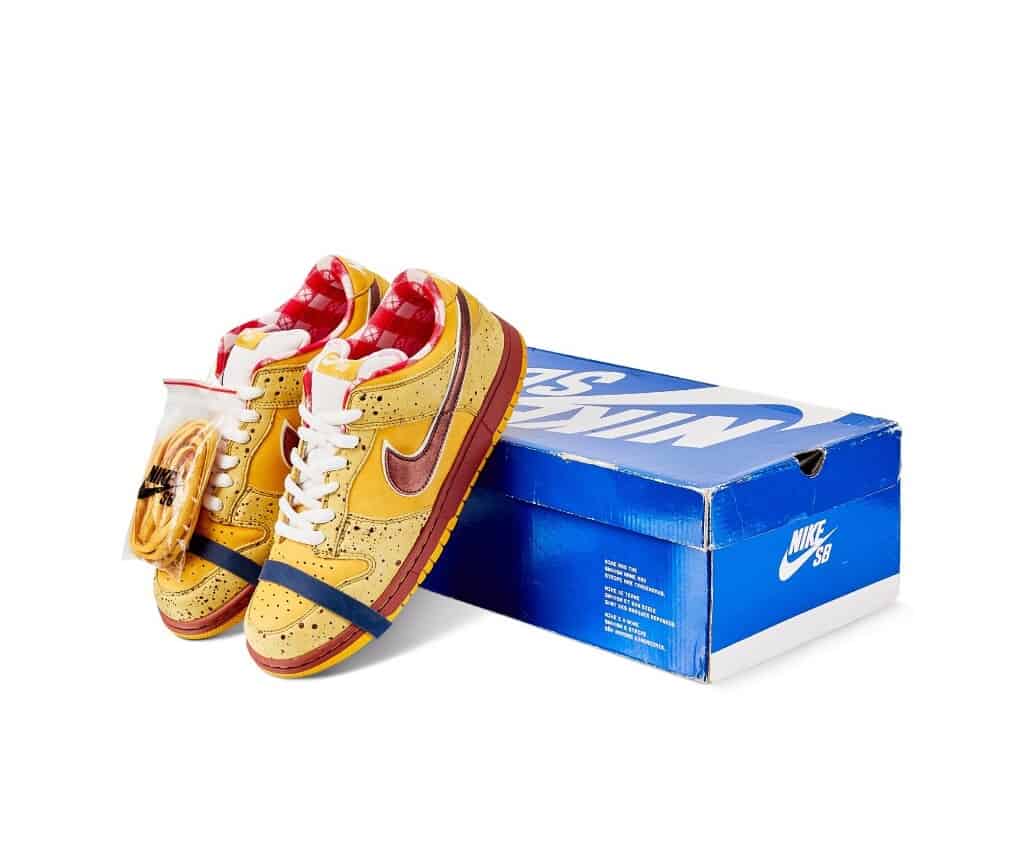 Tennis shoes inspired by lobsters? Sure, why not! The 2009 collaboration between Nike and Concepts was inspired by a classic lobster dinner in New England. Beyond texturing reminiscent of the sea creature, the shoes include rubber bands around the toe. You know, like rubber bands on a lobster’s claws.

In the end, fewer than 40 Lobsters were made in yellow. Nike and Concepts made other colors, but they were equally limited.

Today, Nike Yellow Lobsters are worth about $41,000. The shoes never saw a large-scale retail release, so that price tag will probably grow as time goes on. Would you buy these if Nike made more?

Beyond yellow, other Nike X Concepts Lobster shoes were made in purple, green, red, and blue. 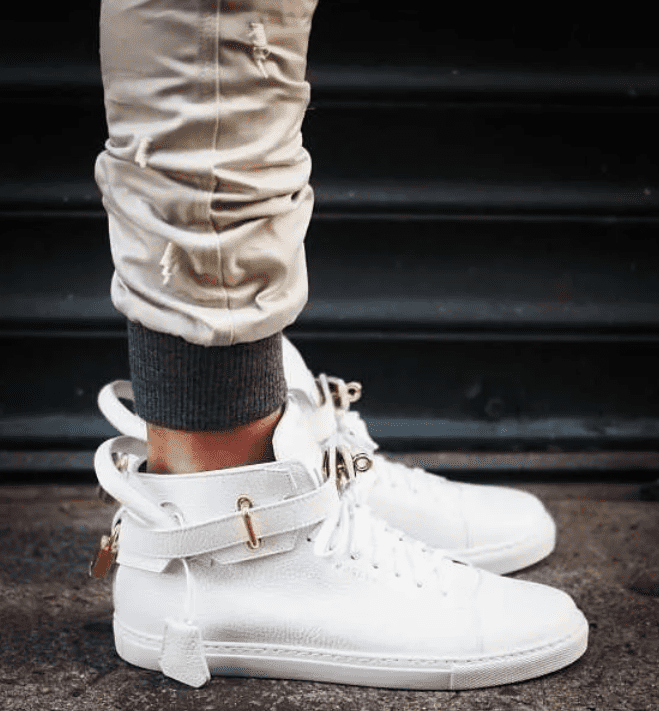 A lot of expensive tennis shoes are pricey because they’re rare, but that’s not good enough for some designers.

How many diamonds? Try more than 11 carats worth.

All those expensive rocks mean these are expensive shoes. The design was unveiled when BUSCEMI opened its new store in SoHo, a wealthy area in New York City. As onlookers watched, the diamond sneakers were unveiled alongside their price tag: $132,000.

That’s a sky-high price, but the shoes may technically be worth it. Beyond all those diamonds, BUSCEMI’s expensive tennis shoes feature 18K gold and real leather. You’d basically be wearing a jewelry store on your feet.

The diamonds on these shoes were provided by Shayan, an expensive jeweler. 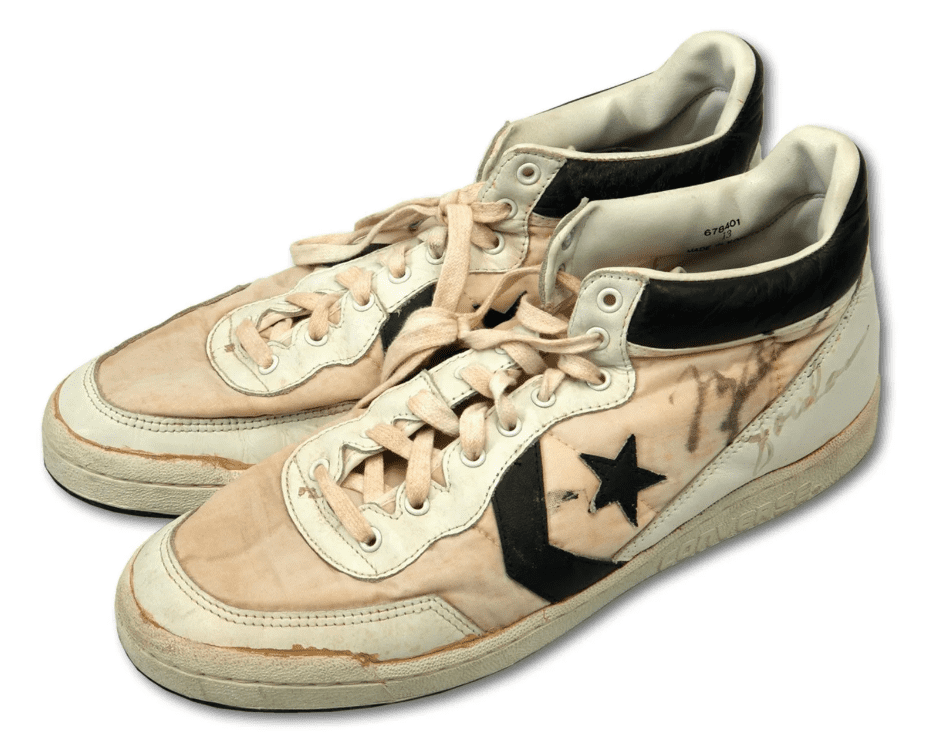 Michael Jordan is probably the most famous athlete of all time, so it makes sense that anything owned by him would sell for thousands. These shoes in particular are worth a lot, mainly because they have such a cool backstory. The Converse Fastbreaks were worn by a young Jordan as he played at the 1984 Olympic trials. Jordan would go on to lead the American team to a gold medal, hence the name “Gold Medal Shoes.”

Michael Jordan is retired, but he briefly rejoined the basketball court in the early 2000s to play for the Washington Wizards for a few seasons. 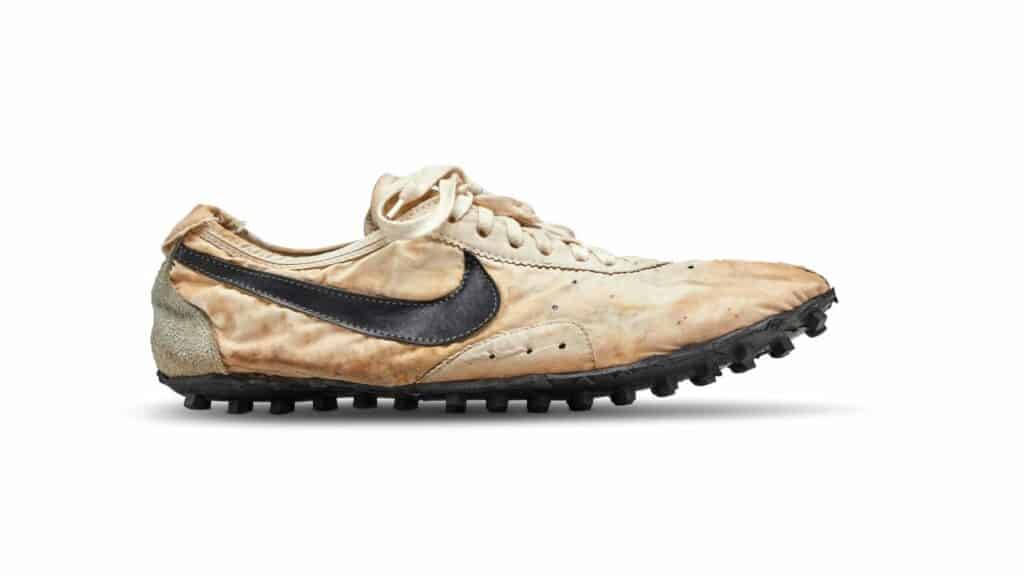 Nike’s Moon Shoes are technically called Waffle Racing Flats, but everyone calls them moon shoes because they look like the footprints left on the moon by astronauts in 1969.

Only around a dozen pairs of Moon Shoes were made, and this pair was hand-crafted by Geoff Hollister, one of Nike’s original employees. Nike only started selling sports shoes in ‘72, so these are some of the rarest and oldest Nike tennis shoes on earth.

With so few in existence, Nike’s early tennis shoes are worth a fortune. One pair sold for more than 400 grand in 2019 — but like many historic tennis shoes, that price will probably climb even higher over time. 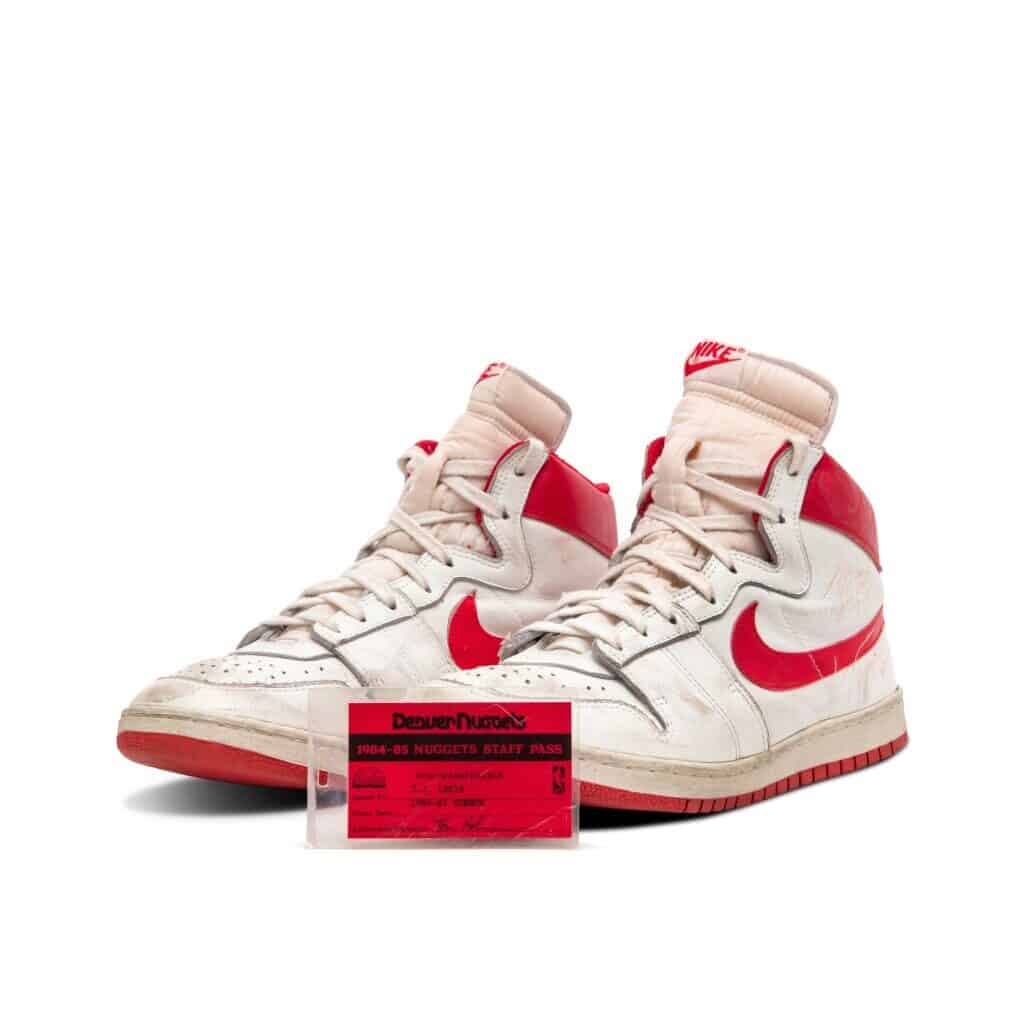 Michael Jordan’s Game 5 Nikes are the most expensive tennis shoes.

Valued at over a million dollars, Jordan’s famous Nikes are easily among the most expensive tennies ever. The shoes were reportedly worn during the icon’s 5th NBA game, making them the earliest-known game-worn shoes owned by Jordan.

Beyond such a cool backstory, these shoes are signed by Michael Jordan himself. Sotheby’s auction house sold the Nikes and says they were given to Mr. Tommie Tim III Lewis by Jordan before they went up for sale years later.

These shoes are size 13. Jordan often wore different shoe sizes on either foot during games to get a perfect fit on both sides.

8 Most Expensive Neighborhoods in NYC