8 Most Expensive Neighborhoods in NYC

In the 1600s, Dutch colonizers landed in what would one day be called New York. The travelers were met by the area’s indigenous populations — mainly the Lenape people according to the Smithsonian.

The Dutch eventually built a wall that blocked the Lenape out of their homeland and prevented British attacks. This area became modern-day Wall Street.

As the Dutch built their settlements, the land was named New Amsterdam. Dutch rule only lasted for a few decades though. Britain took over the area in the 1660s and renamed it New York. About a hundred years later, the area became a key region of resistance as the American colonies pulled away from British rule.

After the war, New York became an important economic hub for the U.S. This trend continued through the 1800s as more and more European immigrants moved in. By the early 1900s, New York’s busiest areas had formed the famous city we know today: New York City.

In the modern world, NYC is one of the biggest and most expensive cities on the planet. Learn more about the area’s most expensive neighborhoods with this top eight list! 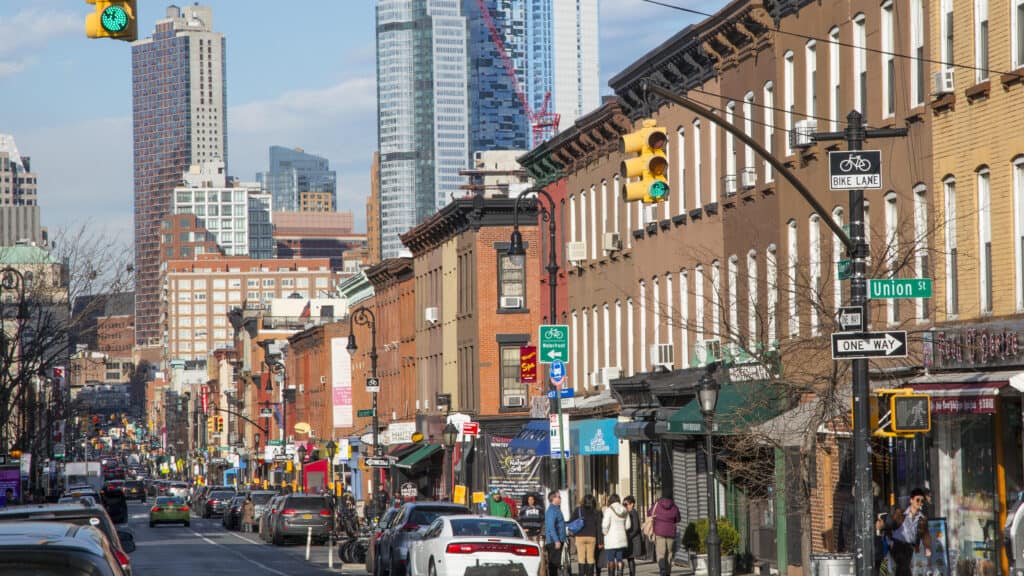 When it comes to prices, Carroll Gardens is very expensive. The median home sale price stands at $2 million, which means half of all houses in the area sell for more than two million.

Beyond housing, Carroll Gardens has a lot of pricey and popular dining spots. One of the neighborhood’s most loved restaurants is Lucali, a pizza place that’s known for its delicious, basil-covered pies. One tourist guide says the spot is so popular that you could wait for hours to get a table — and reservations aren’t accepted.

Many Italian immigrants moved to Carroll Gardens in the mid-1900s. Today, the community features several butcher shops owned by Italian-Americans for generations. 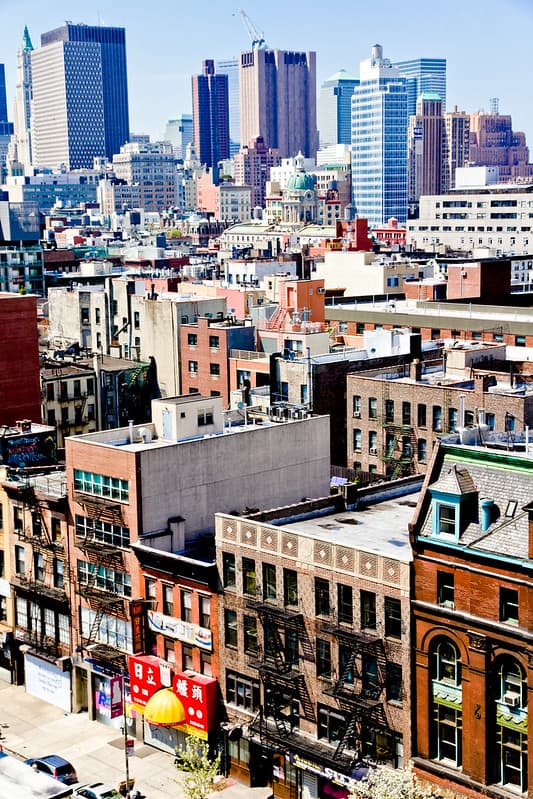 NoLita has been called New York’s most photogenic neighborhood, and it’s not hard to see why. The relatively small community of just over 6,000 residents is filled with cozy cafes, cute boutiques, and plenty of beautiful streets.

Stroll down the sidewalks and you’ll find restaurants like Saxon + Parole with pricey dishes such as bone marrow and Angus beef burgers. After lunch, the neighborhood offers stores run by independent designers and patches of natural beauty in the form of city parks.

When it comes to the cost of living, NoLita residents face a median home price of more than $2 million. To put that in perspective, the median home price for all of the U.S. hit an all-time high in March 2022 at $375,300.

So what can two million dollars get you in NoLita? Not much. One house for sale in 2022 offers just over 700 square feet of living space, one bedroom, and one bathroom — all for $2.1 million. You do get access to the building’s private garden space though, which is pretty rare in NYC. 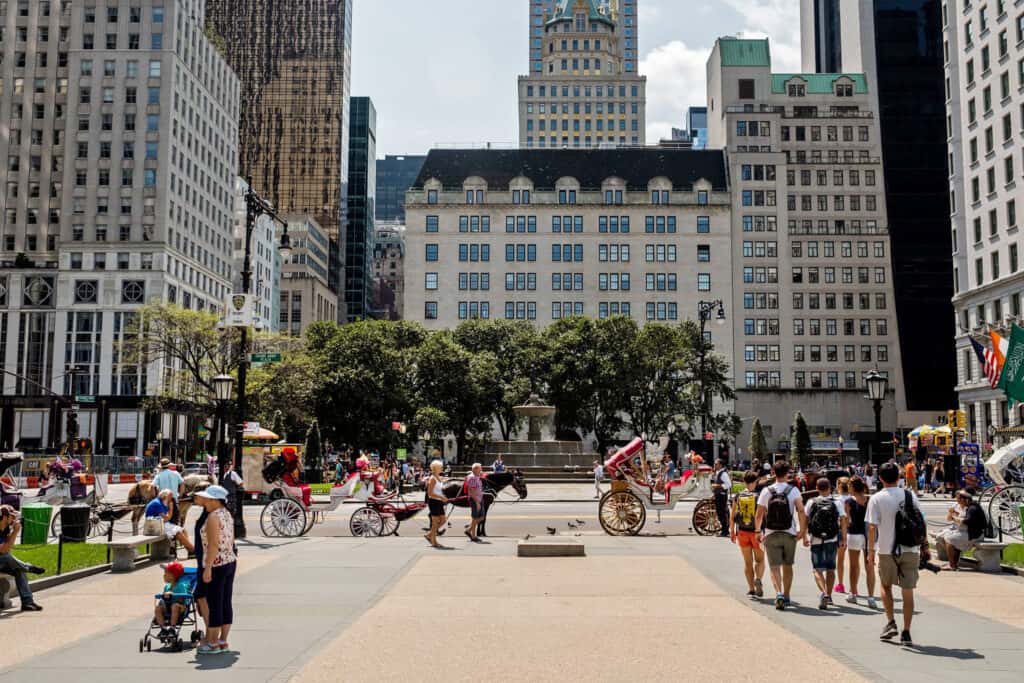 Central Park South has been called “frenetic” because of its proximity to New York’s famous green space. The park sees over 40 million visitors each year, but that’s not even counting all the people who pass through the area throughout their daily lives.

The small neighborhood of Central Park South is busy in and of itself, with a population of about 45,000 people. (However, that number is a little skewed because South is such a small area that it’s hard to define the exact limits of the neighborhood.)

The most notable feature of South is its proximity to just about everything. Head one direction and you’ll find Michelin-starred restaurants, head another and you’ll see the famous Plaza Hotel and 5th Avenue. Within the neighborhood itself stands the Museum of Arts and Design, a cultural institution known for displaying a range of contemporary art. There’s a lot to see!

Overall, Central Park South is at the center of the city’s most beloved attractions — and residents pay for it. The median house price is two and a half million dollars, making Central Park south the sixth-most expensive neighborhood in NYC.

This neighborhood is located near Carnegie Hall. 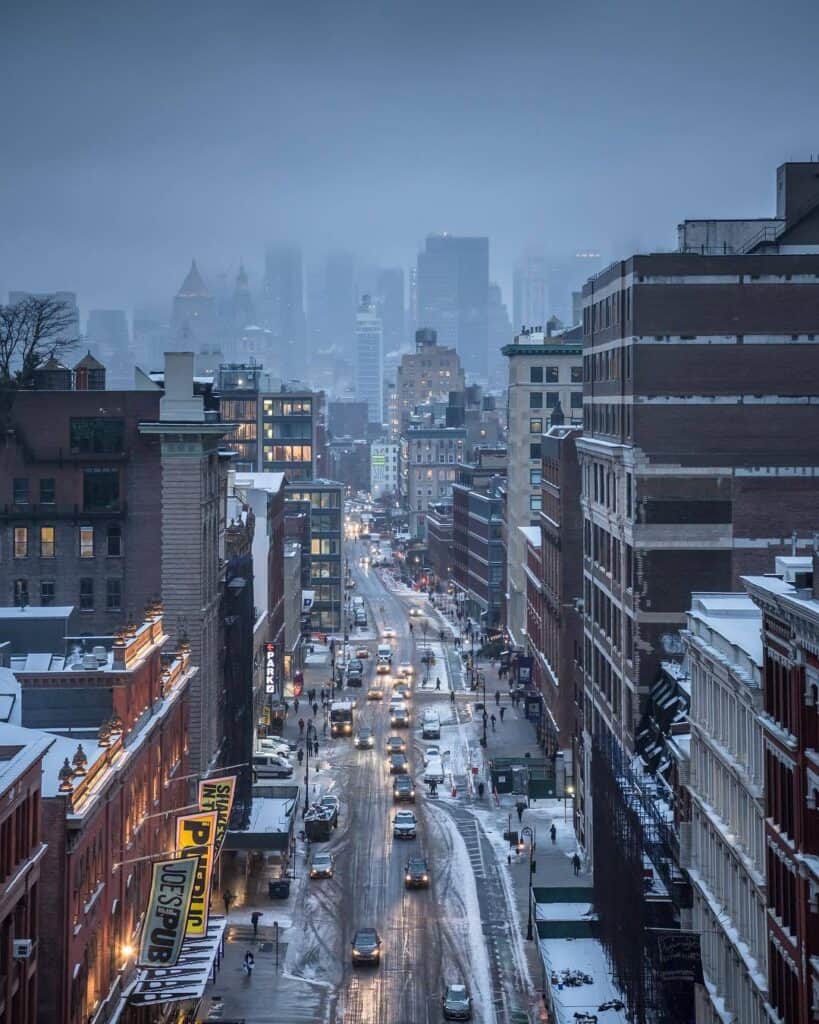 NoHo might be a little overshadowed by its slightly more famous sister, SoHo, but the small neighborhood can be just as charming — and expensive. The community only takes up a few blocks, but a lot is packed in that small space.

The Public Theater is known for showcasing up-and-coming productions, including the smash hit “Hamilton,” while Joe’s Pub is famous for its food and performances. There are also plenty of restaurants and bars to visit. It’d be hard to get bored in this neighborhood.

Interested in NoHo? Be ready to drop some serious cash there. The community has a median house price of $3.5 million, making it the fifth-most expensive neighborhood in NYC.

Cooper Union is located near NoHo. 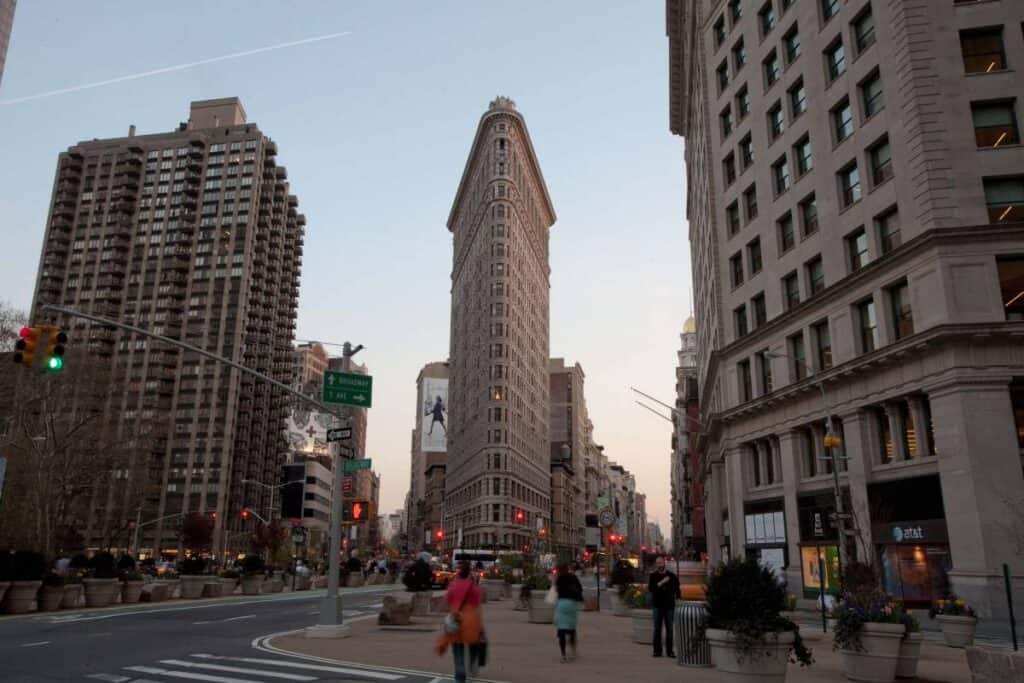 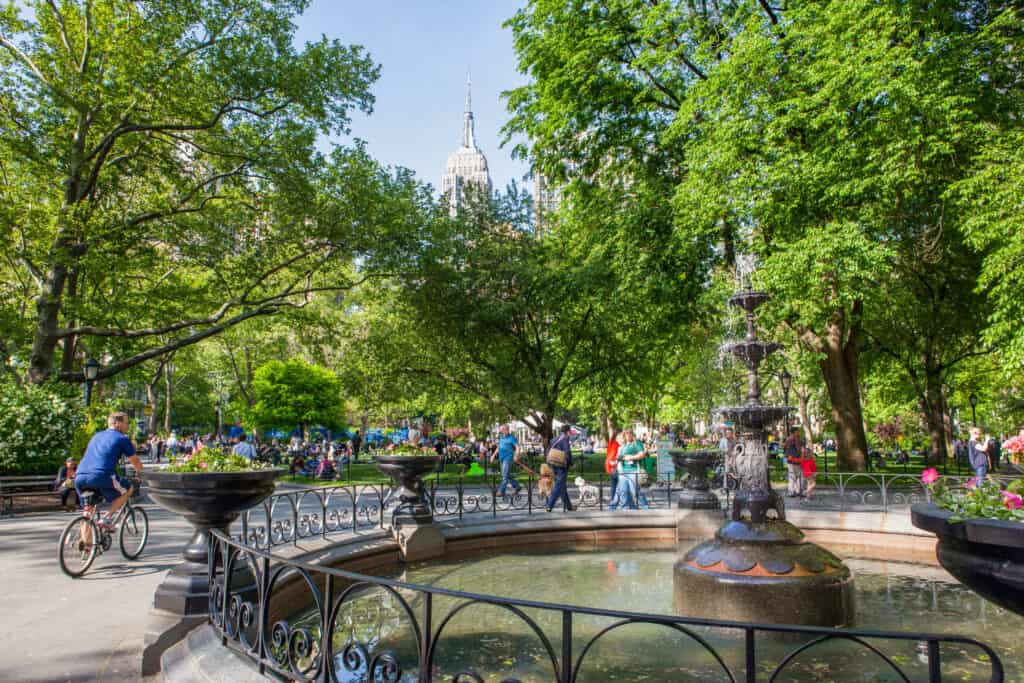 Featuring the famous Madison Square Park, NYC’s Flatiron District is an expensive neighborhood filled with iconic tourist attractions. One of the area’s most famous sights is the Flatiron Building, a triangular design built at the start of the 20th century to fit within the area’s small plaza. The building is the world’s first skyscraper made with a steel frame and one of the city’s most recognizable structures.

Housing is about as expensive as you’d expect for such a famous area in the heart of NYC. The neighborhood’s median house sale price stands at a whopping $3.9 million.

The Flatiron Building was cleaned and restored in the 1990s. 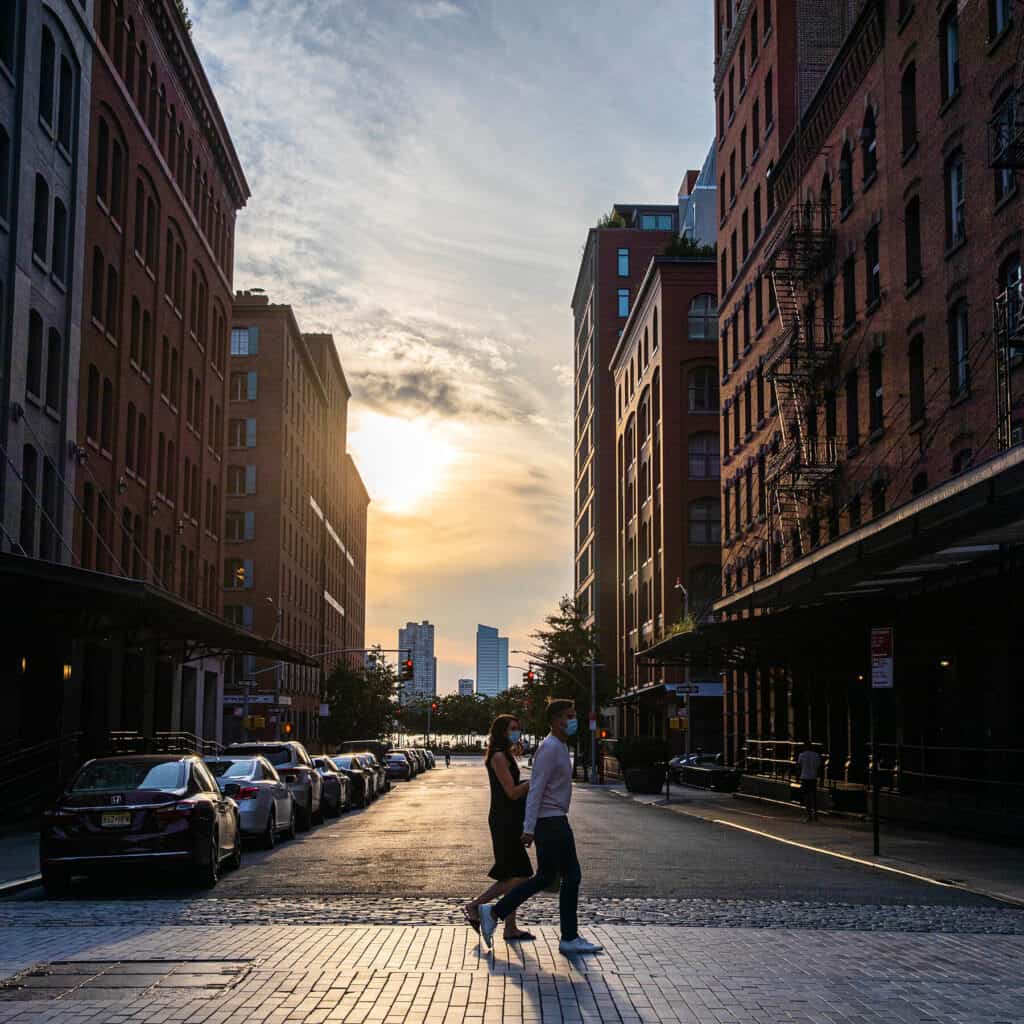 Tribeca used to be an area covered with warehouses, but the space became a neighborhood filled with millionaire celebrities over time as wealthy homebuyers moved in. Part of the love for Tribeca comes from its more laid-back vibe. According to people who live there, the neighborhood is much more relaxed than busier NYC communities.

Today, the neighborhood is one of the most desired regions of the city — and house prices reflect that. The median sale price for a home in Tribeca comes in at more than $4 million.

Beyoncé, Taylor Swift, Meryl Streep, and many more wealthy celebrities have homes in Tribeca. The area also has a strong connection to the film industry, hosting the Tribeca film festival each year. 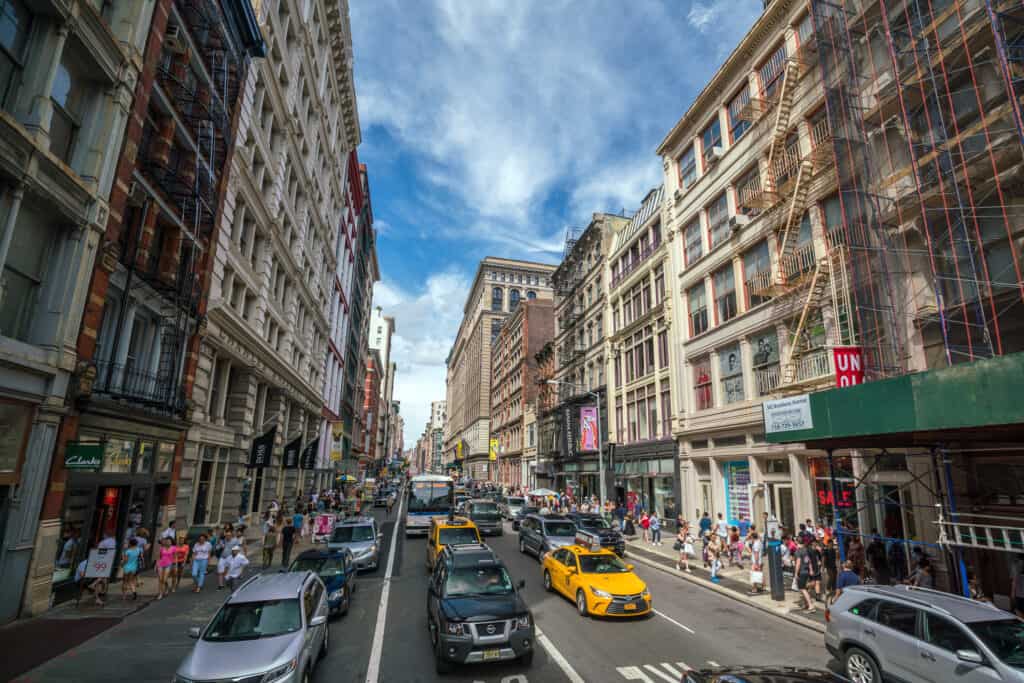 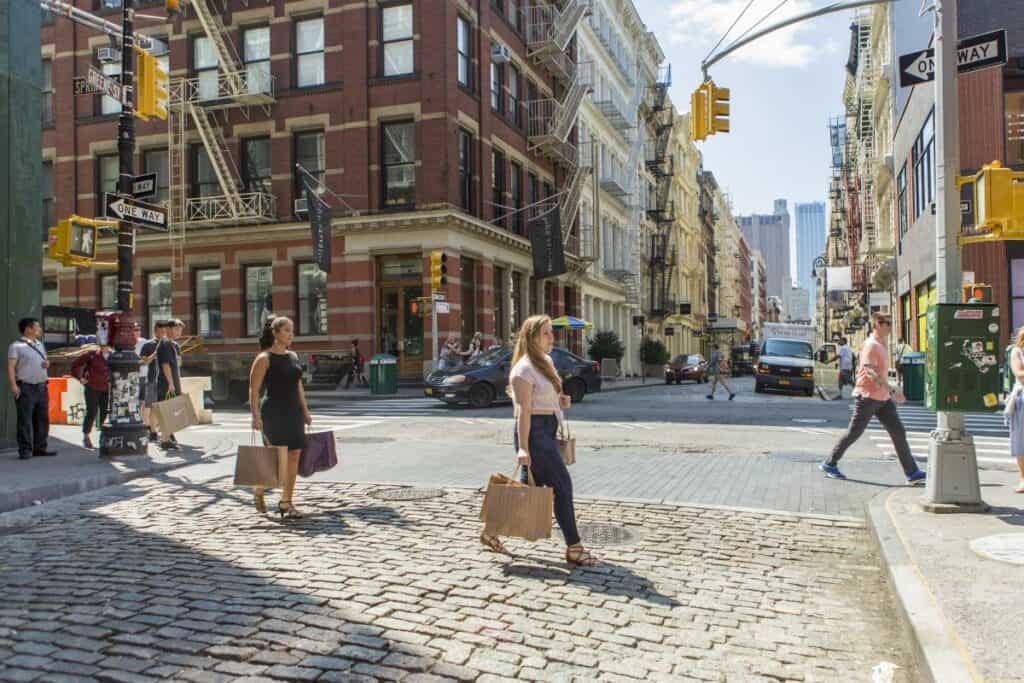 Known for its pricey boutiques, SoHo is one of the most luxurious shopping destinations in the world. The community was famous for its art scene in the 1970s and ‘80s, but it’s become more of a shopping hub than anything else.

The neighborhood offers plenty of restaurants too, so you’ll have a lot of lunch options after dropping a few thousand at the area’s high-end stores.

When it comes to real estate, SoHo is competitive. The market has gotten increasingly hot in recent years, and most homebuyers spend more than $4 million to get a house in the neighborhood. 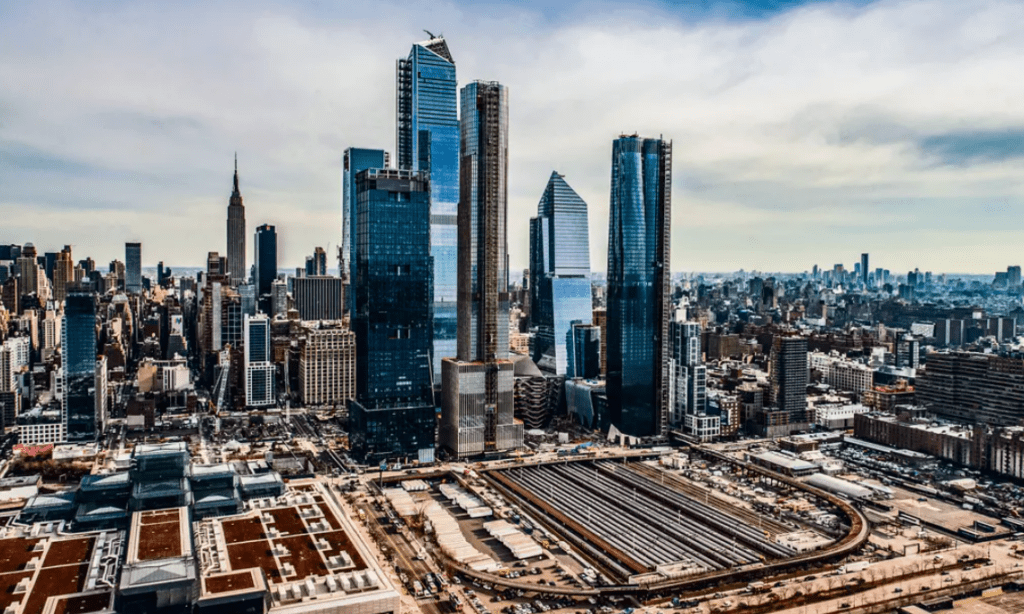 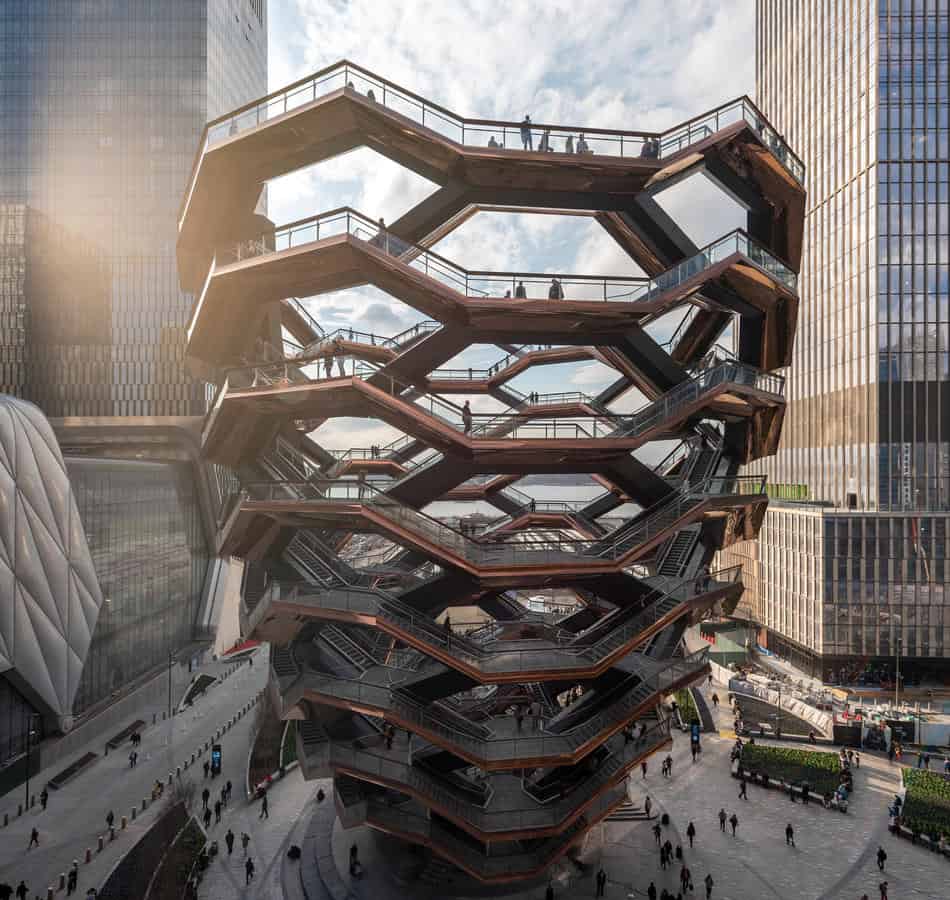 Hudson Yards is the most expensive neighborhood in New York City.

NYC began planning Hudson Yards in the early 2000s, but the combined residential-commercial area didn’t open until 2019. And for good reason. The massively expensive project cost $25 billion and is one of the biggest private real estate ventures in American history — it was a massive undertaking.

Today, Hudson Yards is one of the most exclusive neighborhoods in America. The community has been called “a billionaires’ playground,” with a blend of multi-million-dollar apartments and pricey commercial spaces.

One store literally charges 800 bucks for a haircut while the median house sells for more than $5 million. So yeah, you need some serious cash to live in Hudson Yards.

Beyond insane price tags, one of Hudson Yards’ most striking features is Vessel, a massive structure of interconnected flights of stairs. Despite its exclusive location, the art installation is open to the public.

Before Hudson Yards was built, city officials hoped to use the area to host the 2012 Olympics. That never happened, and neighborhood plans eventually moved forward.

8 Most Expensive VR Headsets You Can Actually Buy