M&M’s chocolates combine delicious aromas and vibrant colors, making it no surprise that they are many people’s favorite candy.

Even though their story started in the U.S. in 1941, Mars Incorporated sells them in over 100 countries nowadays. Chocolate lovers can enjoy M&M’s in various colors, although these have changed over the years.

However, the taste is the same, regardless of the chocolate color. These bonbons are unique because they don’t melt the hands, which is also a part of their long-lasting slogan.

M&M’s also have different sizes. One can find them in a regular, mini, and mega packages or as a chocolate bar. Even though all bonbons inside the pack have the same chocolaty flavor, Mars produces editions with various tastes, including peanut butter, white chocolate, and dark chocolate.

But consumers probably don’t even assume that some shades of these candies might be rarer than others. Before we discover the rarest M&M’s color, let’s explore how others are distributed. Cyan blue might not be the first color that comes to one’s mind when choosing the most common M&M’s shade. However, this one represents 24 percent of all M&M’s chocolate candies in circulation.

Mars Incorporated introduced the blue-colored bonbons in 1995, and it was initially less present in a pack. Moreover, this color replaced tan, and many people claim it has a better flavor than others.

The son of the Mars Company founder, Forrest Mars, found the idea for M&M’s during the Spanish Civil War when he saw soldiers eating British candies called Smarties. An intriguing coincidence is that the U.S. Army was the company’s first big customer during World War II. Orange M&M’s are the second most common in the pack and make for 18 percent of all the colors. These bonbons joined the chocolatey squad in 1976.

They came as a replacement for the red-colored M&M’s as these were under suspicion for containing cancerous ingredients. Orange is also the character to advertise pretzel M&M’s.

The son of Hershey Chocolate’s president, William F. R. Murrie, had a 20 percent share in the product. The first M represents him, while the second stands for Forrest E. Mars Sr., the founder of Newark Company.

Green-colored M&M’s candies are a must for St. Patrick’s parties and celebrations. They are also a common ingredient for Christmas desserts and décor.

Ms. Green is a spokes candy for these chocolates, and this character is highly extroverted and opinionated. That is a good depiction of the green color, typically associated with freshness, fertility, and progress.

M&M’s aren’t only candies and addition to cookie recipes but also a subject of numerous rumors. For example, many consumers believed that the green-colored chocolates were aphrodisiacs, and Mars Incorporated used this urban myth multiple times to sell these candies. Yellow-colored chocolates were among the original M&M’s crew and many people’s favorites due to their vibrant color. These are also the top choice for decorating summer desserts and kids’ parties.

Moreover, yellow and red were the first two M&M’s spokes candies and appeared in nearly every M&M’s commercial. The Yellow character is known as the simple one and likes fluffy things.

Dulce de leche M&M’s joined the markets with large Hispanic populations in 2001. However, the Hispanic community never became a fan of these sweets, forcing Mars to discontinue them in early 2003.

Representation: 14%
Color made from: Red Dye 40 (U.S.); Dye Carmine made from the processed shells of the Cochineal beetle (EU, South America)
Introduced: 1960 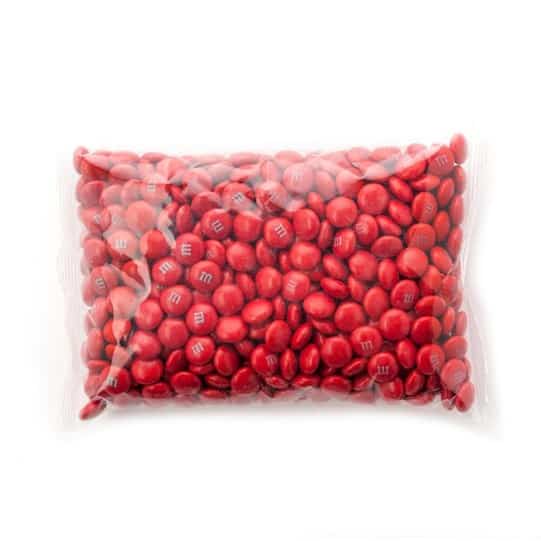 Red-colored M&M’s have a controversial history and were taken off the market for more than a decade. Public controversies surrounding FD&C Red No. 2, a synthetic dye, forced Mars to replace them with orange-colored chocolates in 1976.

Even though red M&M’s didn’t contain the disputable ingredient known as amaranth, Mars feared consumers would avoid these candies altogether. Nowadays, red-colored chocolates include different coating components, depending on the country.

Mars released Peanut Butter M&M’s in 1991. However, the size of the peanut butter became significantly smaller in 2013. Even though not much information is available about the hot-pink-colored M&M’s, these chocolates belong to a limited edition, making them rare. Thus, Mars uses similar ingredients to produce this color and red M&M’s.

Consumers can choose hot pink candies to personalize their packaging on M&M’s website. However, this color is currently unavailable.

Mars released Pretzel M&M’s in 2010. These candies contain a crunchy, salty pretzel inside the chocolate coating and are roughly the same size as the Peanut Butter M&M’s. Silver-colored M&M’s are unique and belong to the limited, personalized edition. These candies add a classic touch to numerous occasions, such as weddings and anniversaries.

As a result, people often use them as décor for birthday buffets or to make the chocolate glaze more glamorous. These candies are kosher dairy and typically only available online.

Fans could vote on what M&M’s flavor they wanted Mars to produce in 2015, choosing between honey nut, coffee nut, and chili nut. American actor Tony Hale announced coffee nut as the winner. These M&M’s are hard to find due to their unique coating coloring. However, people love these candies and enjoy adding them to dessert tables and candy buffets.

They are an ideal edible decoration and give a celebratory touch to every event. Thus, silver M&M’s have a neutral color, making them highly versatile and sought after.

The Mars candy bar company refused the inclusion of M&M’s chocolates in Steven Spielberg’s movie E.T. in 1982. The competitor, Hershey, used that opportunity, showcasing their Reese’s Pieces, resulting in a dramatic sales increase.

Mars produces M&M’s in various colors, but the purple-colored chocolates are the hardest to find. Consumers can find them online, but these aren’t available in the classic pack.

Purple-colored M&M’s initially belonged to the classic pack, but Mars replaced them with tan candies in 1949. They reintroduced them in 2002 after the public voted for their comeback, but this was short-lived due to being a limited-time promotion. 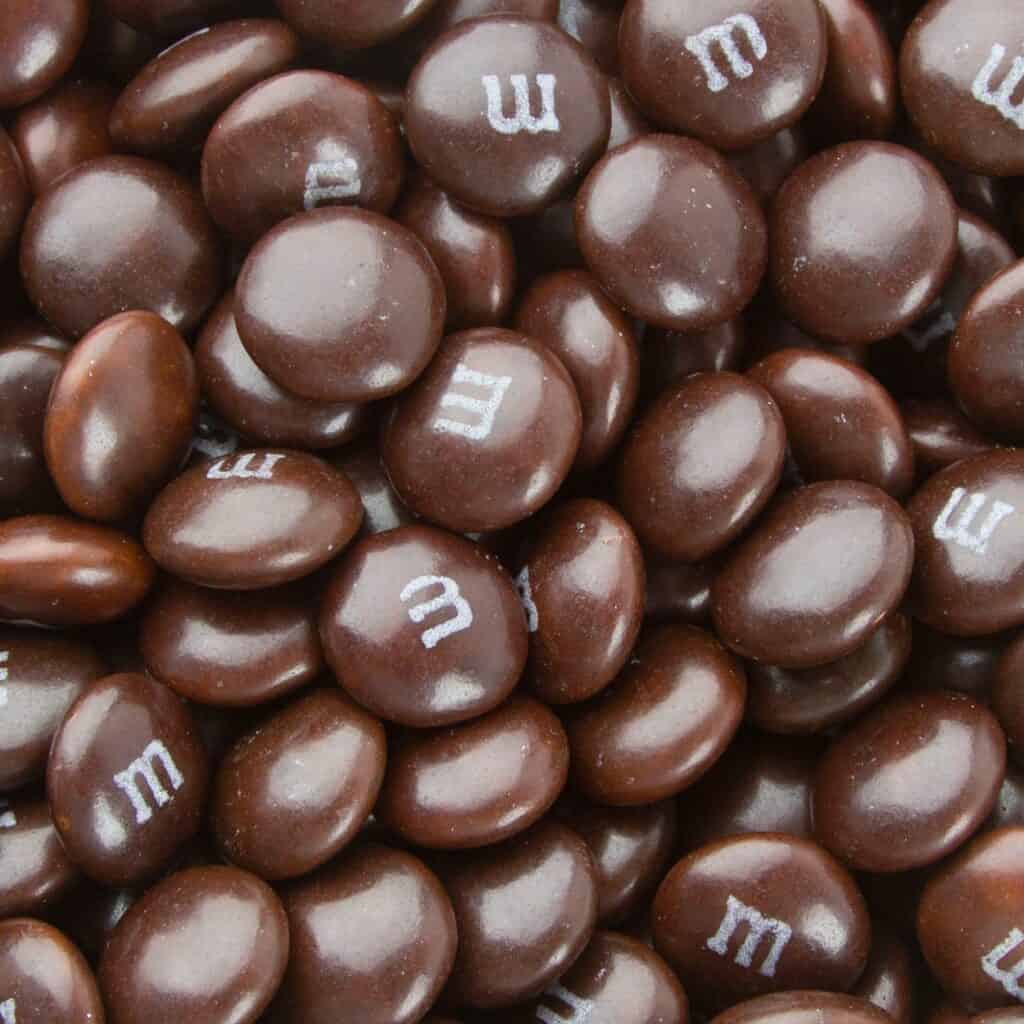 Although an unlikely suspect, brown is the rarest M&M’s color in the classic package. However, this was once among the leading hues, taking more space in the bag than today.

But it’s a mystery why brown-colored M&M’s are the rarest. On the other hand, every factory can use different proportions, and these candies might be more common in some countries than others.

In the 1980s, rock band Van Halen had a tour clause stating that all brown-colored M&M’s chocolates should be removed from the backstage bowls. They revealed in an interview in 2012 that they used this as an indicator of whether the concert promoter had actually read their complicated contract.

M&M’s chocolates are many people’s favorite candy, but everyone has a color they love more than the others. For instance, a Reddit survey revealed that blue and brown are equally popular among men and women.

However, females prefer green and yellow, while males love orange-colored M&M’s the most. Even though these colors win as consumers’ favorites, brown candies are the rarest.

The reason is unknown, but that color represents only 13 percent of the package. Compared to others, brown-colored chocolates also encountered less controversy and were never taken off the shelves.

The 8 Most Expensive Cars in Forza Horizon 5