The term SUV covers a pretty broad range of vehicles, but SUVs are generally characterized by two things: they’re good for off-roading and they have four-wheel drive. They also tend to be more durable vehicles and have a lot of storage space.

All those benefits make these vehicles very popular. SUVs accounted for nearly half of car sales in the U.S. in 2019 — and that number is expected to keep growing.

Since SUVs are so popular, it’s not surprising that people are willing to spend a lot of money to get their hands on them. These are the top 10 most expensive SUVs. 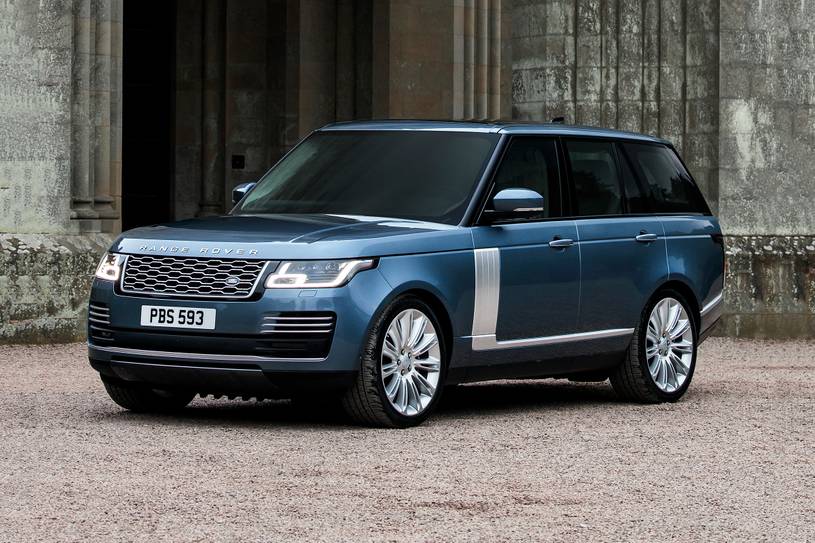 The first Range Rover came out in 1970. Even then the vehicle was called one of the most luxurious SUVs. Now, in the 21st century, Range Rovers remain a popular option for anyone on the hunt for luxury.

This 2021 model features a lot of expensive details. The vehicle is available with several different power systems, including a hybrid version, a V8 version, a turbodiesel, and more. The interior includes multiple touch screens, a built-in navigation system, and an insulated cabin to keep traffic noise down. 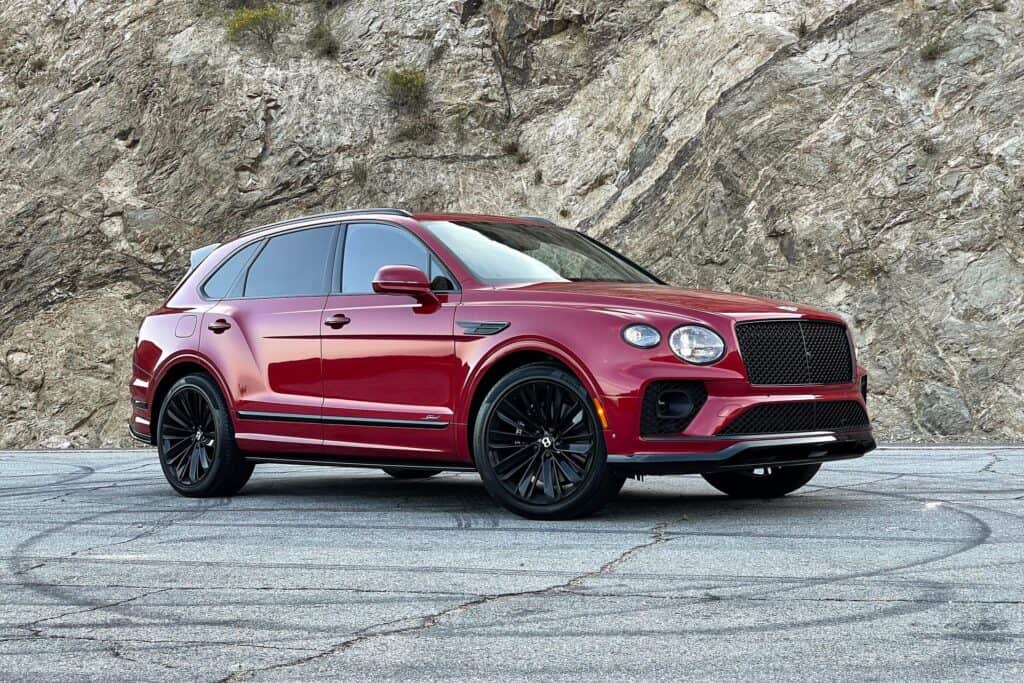 If you want a fast SUV, this is for you. As the name suggests, the 2021 Bentley Bentayga Speed can hit 60 mph in just a few seconds before hitting its max rate of 190 mph.

Despite that speed, this vehicle seems to maintain a smooth driving experience. Part of that smooth experience comes from luxurious interior details like climate controls for passengers and driver-assistance tech that keeps you in the proper lane.

With a price tag of nearly $250,000, you might hope every high-end feature is standard. But in reality, buyers might need to spend several thousand dollars to add stuff like Bentley’s signature Naim stereo. 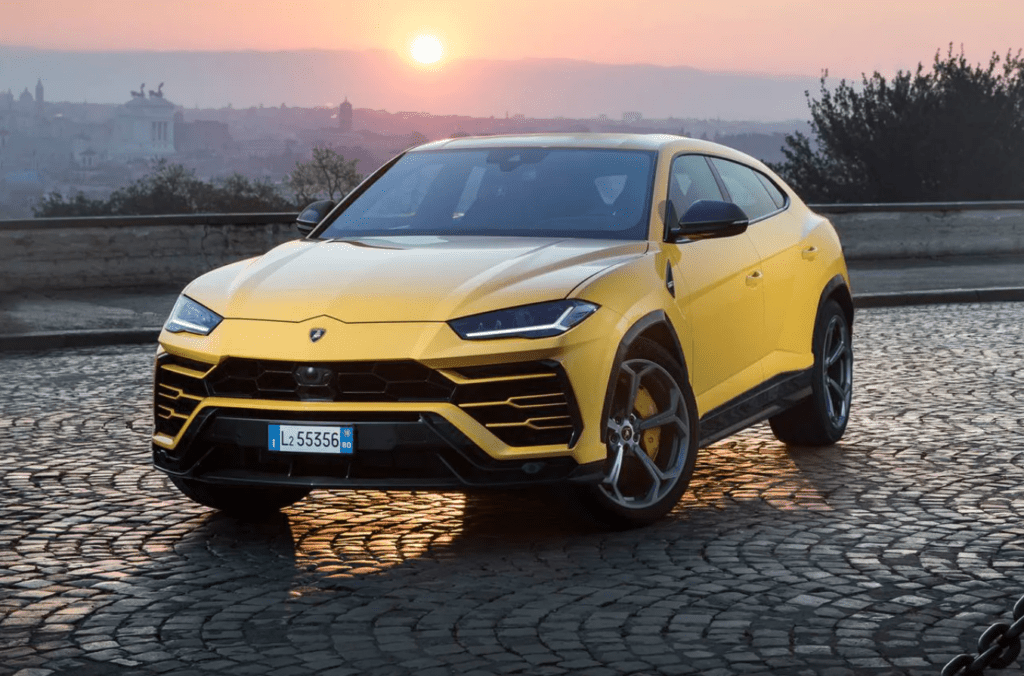 If it comes from a Lamborghini factory, it’s probably expensive. And yes, this SUV is very expensive. The 2021 model goes for more than $260,000.

So what do you get for that? First, a 641-horsepower turbocharged V8 powers this luxury vehicle, helping it hit 60 mph in just 3.3 seconds. Next, the SUV’s interior features stuff like a voice control system, touch screens to control things like AC, and an optional 21-speaker sound system.

Although most people think of sports cars when they hear Lamborghini, the company originally made tractors. It eventually expanded to build AC equipment in 1960 before finally releasing a car in 1963. 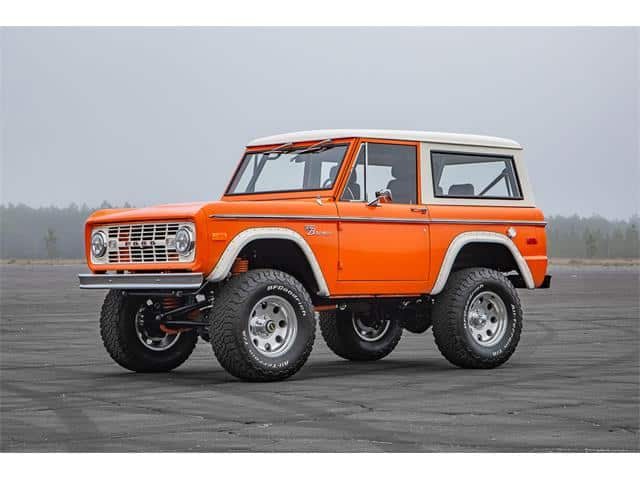 We don’t know who bought or sold this car, but we do know it had a price tag just shy of $300,000. The custom 1974 Ford Bronco went up for sale in Florida. Interested buyers were being offered an SUV that still had that ‘70s look while updates like a new sound system boosted the price.

The first Ford Bronco came out in 1965. Interestingly, the Bronco was the first automobile specifically called an SUV (meaning “sports-utility vehicle”). 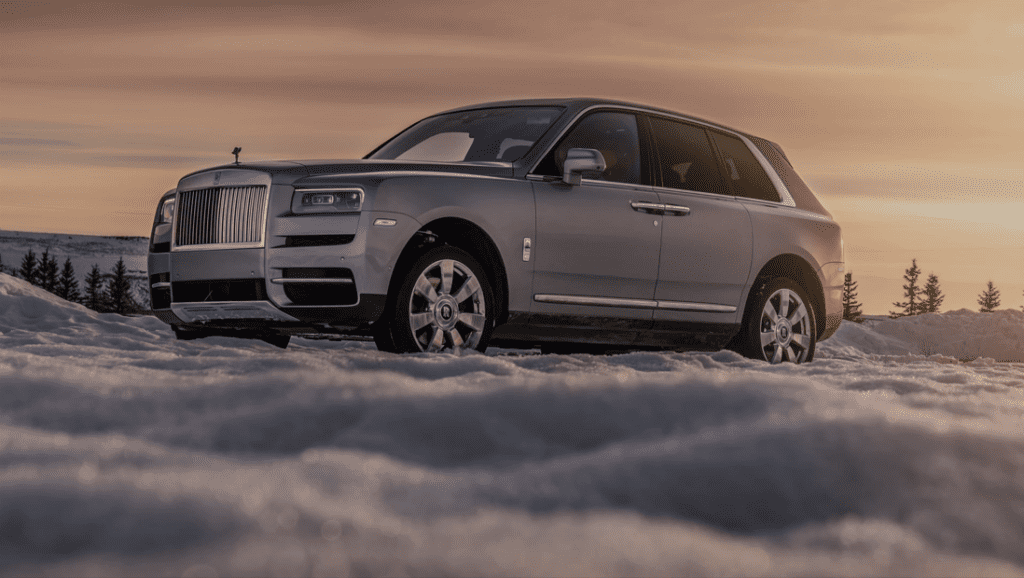 Rolls-Royce got its start when a man named Henry Royce created a mechanical business in 1884. Later, in 1904, Henry made his first car. He soon met with Charles Rolls of London, a businessman who owned a car sales company. The two men decided to form a partnership where Henry would make cars for Charles to sell — and Rolls-Royce was born.

Today, the 2021 Rolls-Royce Cullinan sells for a staggering $330,000. The SUV features a V12 engine and a massive footprint: the vehicle stands 72 inches tall and measures 210 inches long, giving passengers plenty of space to relax in the luxury interior.

Rolls-Royce is known for cars, but the company also made some airplanes in the early 1970s. 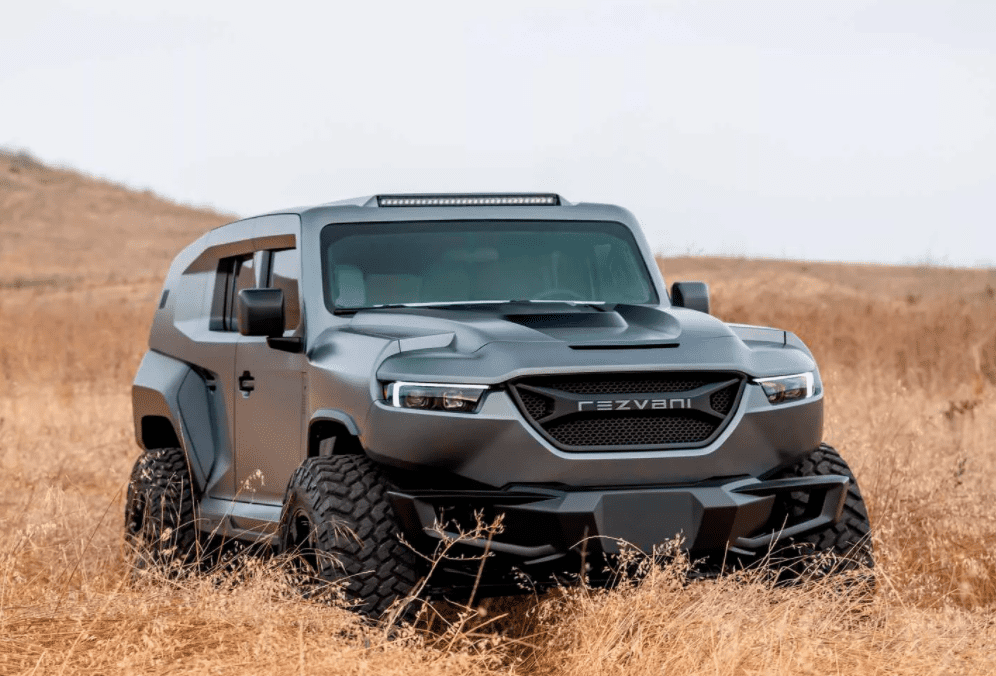 That name isn’t just a marketing tactic. This SUV is actually more like a tank than a normal vehicle. The 2020 Rezvani Tank X includes crazy features like an EMP protection shield, which protects the SUV’s electronics in case of an attack. There’s also a night vision system and hand-stitched leather details — so yeah, this thing is pretty unique.

Beyond those military-style features, drivers get a 6.2-liter supercharged V8 engine and 37-inch tires ready for off-roading.

That price tag somehow just covers the base model. Add a few upgrades and you’re looking at thousands more. 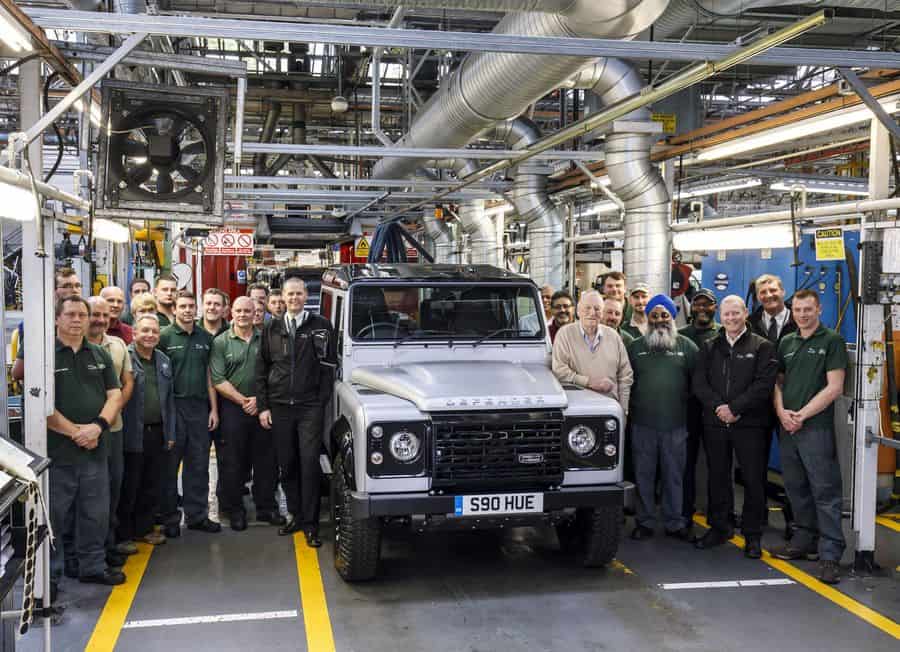 The Land Rover Defender is very popular. It’s so popular in fact that when the 2 millionth Defender went up for auction, one buyer was willing to spend $600,000 to call it theirs.

So what’s so special about this SUV? After all, the model usually sells for about $50,000. There was one main thing that made this vehicle unique: the SUV was partially assembled by celebrities like Bear Grylls as well as important figures like the sons of the brand’s founder. These big names all joined the building process to celebrate the Defender’s success.

The engineering team leader for the original Land Rover, Arthur Goddard, traveled all the way from Australia to London to watch this special SUV leave the assembly line. 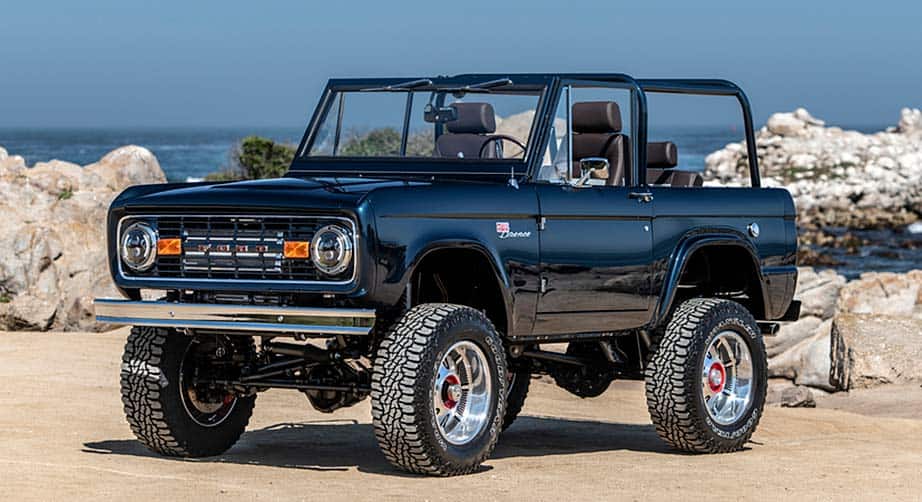 Ryan Blaney is a NASCAR driver who also works with the Ryan Blaney Family Foundation, a nonprofit that supports causes related to things impacting the Blaney family.

In early 2020, Ryan decided to auction off his custom 1974 Ford Bronco to raise money for Alzheimer’s Disease research and care. According to one report, the custom SUV features a dark blue paint job and a modern take on rally wheels with “hidden lug nuts for a clean design.

The custom vehicle ultimately sold for a whopping $650,000, reportedly setting a world record for the most expensive Ford Bronco ever sold.

Blaney’s grandfather suffered from Alzheimer’s before passing away in 2009. 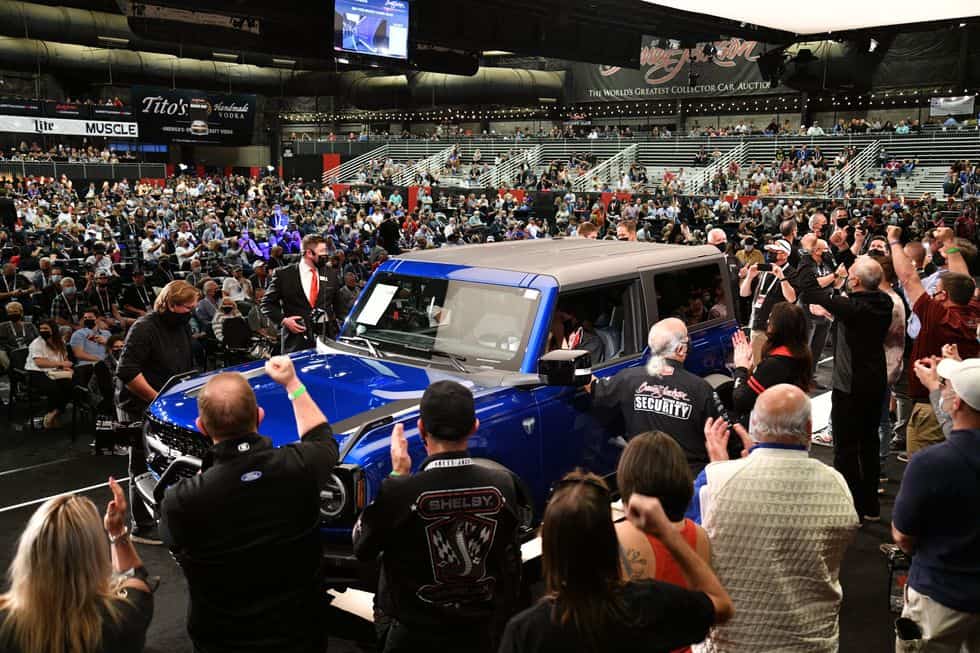 People really like Ford Broncos. When the first 2021 Ford Bronco ever made went up for sale via auction, the winning bid hit an insane $1,100,000. The vehicle included VIN 001 and featured standard details like a 2.7-liter V6. Ford is making just 7,000 of these first editions, so bidders were excited by the exclusivity.

While $1,100,000 is a lot of money to spend on an SUV, all that cash went to a pretty good cause. According to Car and Driver, the winning bid was donated to the National Forest Foundation and Outward Bound, two organizations that are part of Ford’s efforts to get people out in nature more often.

Although this specific SUV sold for more than $1 million, the model’s typical price stands at just about $60,000. 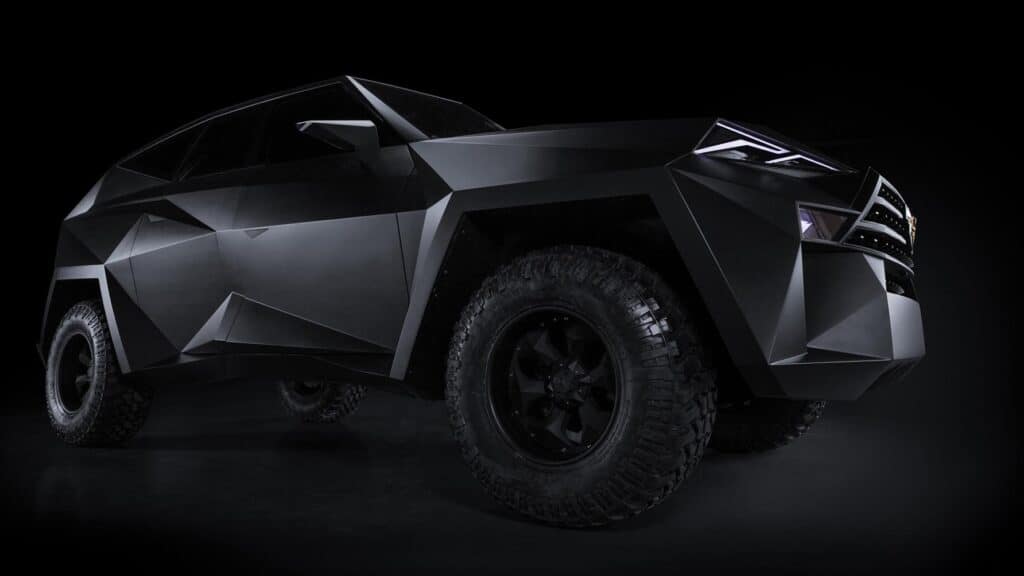 The Karlmann King is the most expensive SUV ever.

With a top price of $3,800,000, this SUV is by far the most expensive on the planet. The unique vehicle is made by a Chinese design firm and a team of builders in Europe. Only 12 units will be made in order to maintain exclusivity, so you better hurry if this vehicle is on your wishlist.

So what does nearly $4,000,000 get you? Beyond luxuries like gold details and a V10, the SUV features optional armoring on the exterior, headlining that makes the ceiling look like a starry night sky, and a coffee machine. For added fun, passengers can turn on neon lighting, enjoy a flatscreen TV, and play a PlayStation 4.

Despite its powerful engine, this SUV has a max speed of just 87 mph. One report says this relatively low speed is caused by how heavy the vehicle is.