Animal Crossing is an exclusive Nintendo property that, unlike most video games, has no clear action or adventure objectives. The game simply gives you a town, presents a problem related to a lack of money or status, and sends you off to figure out how to make a living from the land and animal folk around you.

Most don’t know that the series started as a Japanese game called Animal Forest (2001) on the N64. Almost every player was introduced to Animal Crossing in the 2002 GameCube game. The most recent of these games is Animal Crossing: New Horizons (2020) for the Switch, a game that could not have been a more profitable move for Nintendo during the pandemic if they had created the coronavirus themselves.

In all these games, players become obsessed with finding and interacting with every possible villager in the ever-shifting social ecosystem. These villagers come in all shapes and sizes, but some are much rarer than others. Here are the 8 rarest villager types in Animal Crossing.

There are thirteen known wolf villagers in Animal Crossing. Players know that each villager has a preordained personality, which is broken down in different proportions based on the animal. Of the twelve wolves, five are cranky, two are smug, three are snooty, and only one is classified as “normal.”

The wolves are more than half Sagittarius and are known as being a temperamental villager type.

Whitney is one of the most famous wolf characters in Animal Crossing since she had a starring role in Dōbutsu no Mori (2006), which is the Animal Crossing movie, produced by Nintendo itself. The film never made it to America, unfortunately. Additionally, some of the rarest tools in Animal Crossing were given out as exclusive vouchers to moviegoers in Japanese theaters. 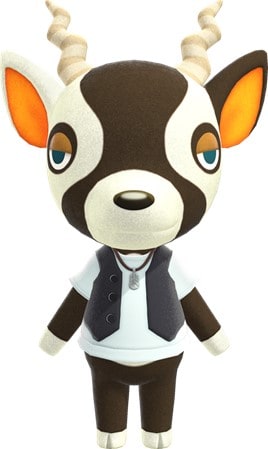 The Deer villager type was introduced in Animal Crossing: New Leaf (2012) released for the Nintendo 3DS. They have hooves for hands and the males have antlers. Only twelve deer villagers have been known to pop up, including Bam, Beau, Chelsea, and Zell.

Shino, who first appeared in Animal Crossing: New Horizons, is unique in that she’s the only female deer who has antlers.

One of the things that is crucial to understand about the Animal Crossing series is that no single villager is “rarer” than any other. The games are procedurally generated when a new town is created, meaning that the landscape, items, and even the people populate the world in an order determined by the game’s program. The “rarer” villagers are really the animal types have been represented less often over the course of many, many games, the deer being one of them. 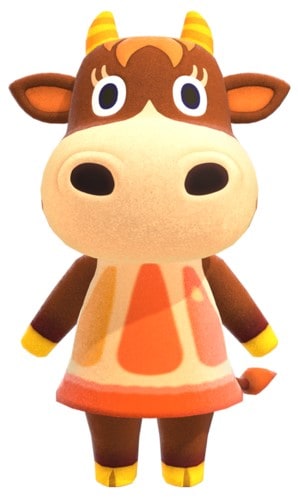 Cows and Bulls are kind of the same animal type with different genders. However, since there are only 9 bull villagers and 8 cow ones, either one could be considered one of the rarest animal types in the game. The bulls are recognizable by their curly horns. Unsurprisingly, almost all of them are Tauruses.

Belle, Bessy, Petunia, and Tipper are a few of the most famous cow villagers. Unlike some animals, cows are spread more or less evenly across every game in the series, beginning all the way back with Dōbutsu no Mori or Animal Forest on the N64.

Patty the cow, otherwise known as “this month’s Ms. Nintendique cover girl,” according to her picture quote in Animal Crossing: Wild World, has been in every single game in the series. In Japanese, her name is Karupi, a reference to “karupisu,” which is a Japanese soft drink made from milk. 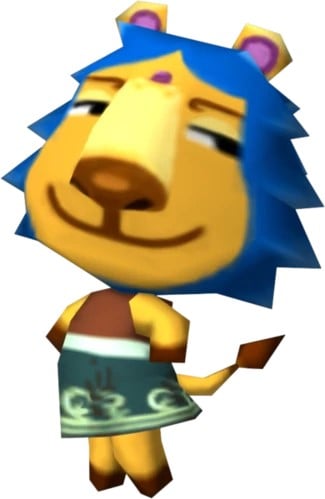 There are only nine lion villagers in all of Animal Crossing, making them one of the rarest animals. There are four with the jock personality, two that are smug and cranky, and one that is lazy. All lion villagers are male and there is no lioness or female equivalent.

While most of the lion characters are born Leos, as you might imagine, Mott, Jubei, and Aziz curiously are not.

Aziz used to be the character synonymous with lions in Animal Crossing, being featured prominently in the early games. He’s since dropped off the face of the series, however, with his last game being Animal Crossing on the GameCube. His name means “dear” in the Iranian language (Farsi). His catchphrase is, “RAWR.” 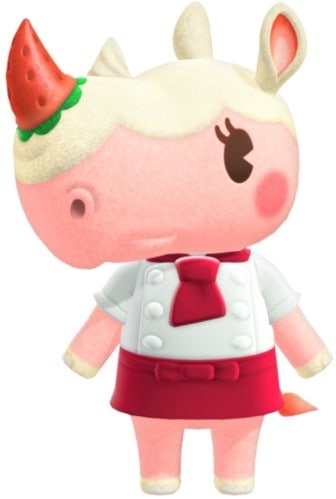 There are nine rhinos in Animal Crossing, showing off the large snoots and stubby horns that we all know and love. Of these nine, there are three with the normal personality type, which is not common for the rarer animal species. Additionally, there are two snooty rhinos, one lazy, one jock, one sisterly, and one cranky.

Some of the most well-known rhino characters have been Hornsby, Merengue, Spike, and Tank.

Merengue may be the most famous of all Animal Crossing rhinos, first showing up in New Leaf. She has a red and white Japanese schoolgirl outfit, a head layered with fur that is whipped cream white, and a horn shaped like a pointy strawberry. “Merengue,” after all, is a reference to “meringue,” the dessert made from beaten and sweetened egg whites. 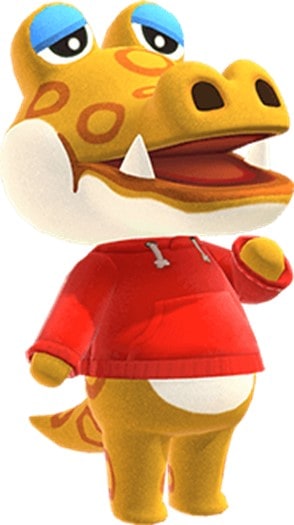 There are nine alligator villagers in Animal Crossing, with notably large heads that take the scary edge off their fanged faces. Their personalities include two normal, lazy, and jock gators and one each that have the snooty, smug, and cranky personalities. In the original game, the alligator character Alfonso played a central role.

Debatably, there may only be seven alligators since one is a robot (Del) that is only shaped like an alligator, and another is clearly a dragon (Drago). However, both are clearly built on the profile of the alligator villagers, with the same head shape, nose, and teeth, so we’re counting them.

Alfonso, the lazy alligator who was Yu’s best friend in the original Dōbutsu no Mori, has been coming back throughout the series. He’s designed as a reference to Nintendo’s Mario, sporting a red shirt and the catchphrase, “It’s a me.” 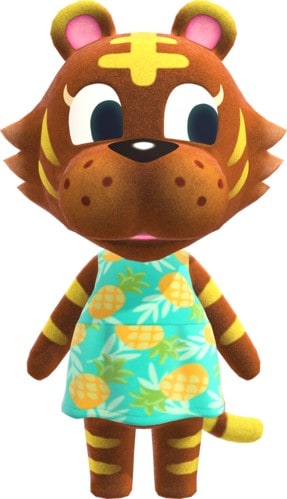 Tigers in the Animal Crossing games are one of the rarest villagers you could see, with only seven showing up in the entire series. Of these, there are three jocks, two that are peppy, one snooty, and one that’s a total crank. No tiger is normal.

There have been tigers in every Animal Crossing game, most notably Rolf, who has been in all of them. All the tiger characters showed up at once in Animal Crossing: New Leaf, Happy Home Designer, and New Horizons.

Rolf is one of the more imposing villagers (he’s the cranky tiger we mentioned). His picture quote in Animal Crossing: Wild World is “I could eat you for lunch, you know.” His hobby is working out. 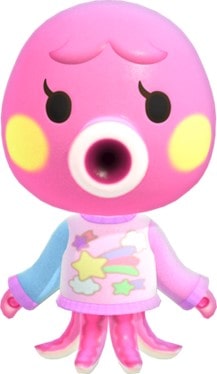 The rarest villager in Animal Crossing is the octopus. There are only five in the series, though they have been around since the very beginning. Most of the games only feature 1 or 2 of the little tentacled guys, whose personality breakdown includes a normal, a jock, a cranky, a lazy, and a smug. No octopus character is peppy, but they have no bones, so we’ll let it slide.

Octavian is an octopus character who has appeared in every game in the series. Additionally, all the octopus characters show up in Animal Crossing: Pocket Camp, the 2017 mobile game for iOS and Android, with the exception of Inkwell.

Octopi in Animal Crossing are unique in that they are both a species of villager and a catchable fish, something that the denizens of the world probably avoid thinking about. This is true of only one other villager type, being the frogs.

Animal Crossing has always been a clever combination of video game and pastime. This was super fortuitous to the series’ sales during the 2020-2021 quarantine, when people had plenty of time to enjoy their little towns every single day.

These animal villagers represent the rarest of the dozens of animal species that can be found in Animal Crossing since the series’ debut in 2001. Since the game goes beyond a conventional video game, becoming what some would consider a full-blown social simulation in the age of online cooperative play, these villager types have huge implications for how you behave in your unique little Animal Crossing world. Each has their own unique look and personality and add up to the game-turned-social phenomenon of Katsuya Eguchi and Hisashi Nogami’s original vision for this quaint friendliness simulator.

8 of the Rarest My Little Ponies Ever Made