Anyone who grew up in the 80s or 90s remembers the chunky, plastic, colorful Disney VHS tapes. In recent years, Disney VHS tapes that are so-called “black diamond editions” have been occasionally selling for exorbitant prices – thousands of dollars – on eBay and other auction sites.

However, just because people list them at that price doesn’t mean that’s what they will sell for. Whether yours will be one of the lucky ones that sell for these extreme amounts, driven by demand as much as by online pricing mythology, is anyone’s guess. For each that gets sold at an inflated premium, hundreds sell for $25-$75.

Here’s our list of the 8 rarest Disney VHS tapes, according to the amounts they fetched in some of the successful auctions for these common yet coveted tapes. 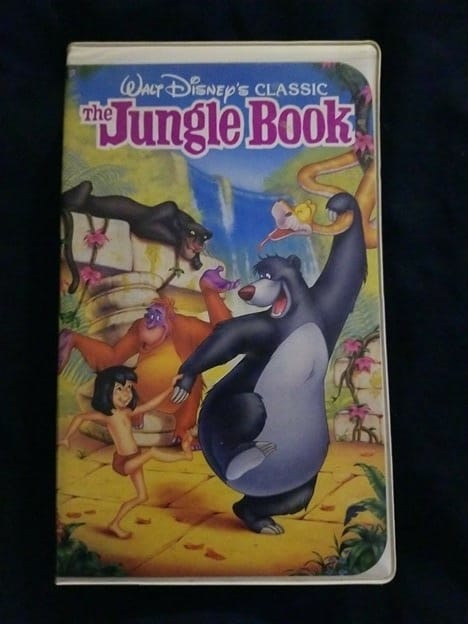 The 1967 Disney classic, The Jungle Book, sold for over $2,000, making it one of the rarest Disney VHS tapes. It is part of the “rare black diamond” collection, noted for the insignia on the tape’s spine that has the words, “The Classics,” in white font in a black diamond shape. This shape is known to drive prices for the most expensive Disney tapes and will feature prominently throughout the rest of this list.

Most Disney animated films in the early days featured many directors, often more than three, to direct separate sequences or different aspects of the film under one “supervising director.” Wolfgang Reitherman is the first Disney director that was the sole director on any of their films, though The Jungle Book is the second time he did this. The first was The Sword in the Stone (1963). 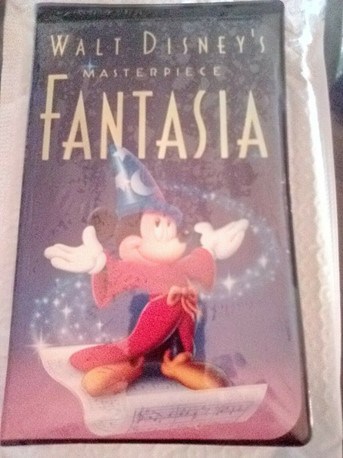 Fantasia in the Disney masterpiece collection sold for over $2,000 on September 23, 2021. This sealed tape represents the oldest film chronologically on this list, dating back to the mid-war era when the success of Snow White represented enormous pressure on the studio to push the envelope of the art form as far as it could go.

The visualized symphony of Fantasia did not meet the audience’s expectations for a cartoon and was Disney’s least profitable film to date. But it remains an interesting, and sometimes expensive, addition to their library.

The Sorcerer in The Sorcerer’s Apprentice was animated as an inside reference to Walt Disney himself, using his infamous “raised eyebrow” to dramatic effect. This is why he’s named Yen Sid, which is “Disney” backward. 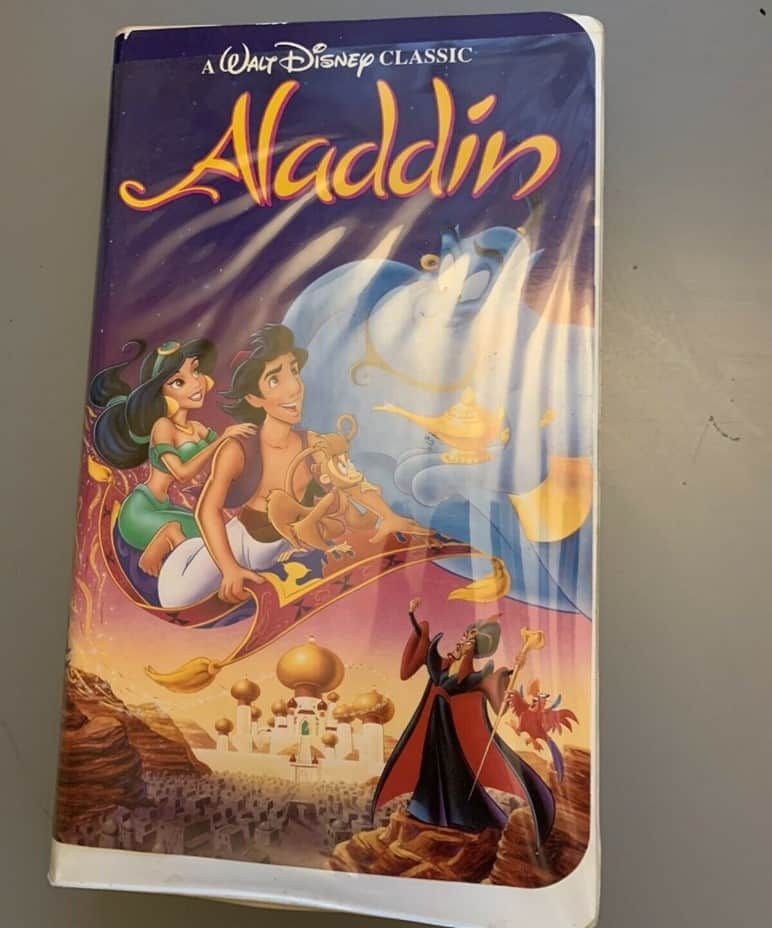 1992’s Aladdin began what would become a Disney tradition that continues to this day to include a song destined to be repeated by celebrities and a challenge to overcome on the Billboard Top 100. Beyond “A Whole New World,” Aladdin is a fan-favorite film and has sold for over $2,000 on eBay.

There’s never been a better time to revisit Agrabah, even if you have to shell out a few thousand for the journey.

Richard Williams, a former Disney animator, had been making an animated film called The Thief and the Cobbler for decades before it lost its financial backing and was reclaimed by a bond company. Disney fast-tracked their version of his movie into production and released Aladdin ahead of the completion of Williams’ film, leading many to believe that their similarities are a result of Williams’ plagiarism, rather than Disney’s. 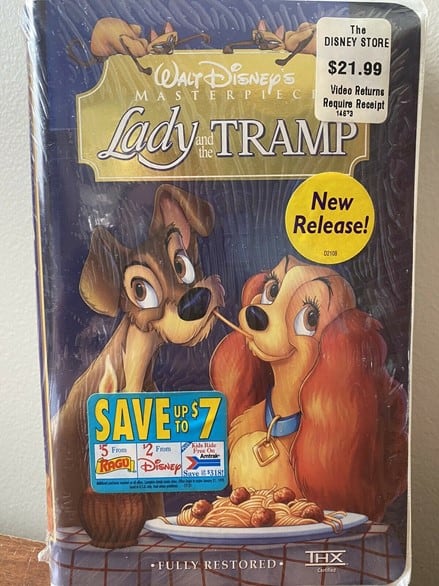 Lady and the Tramp was re-released on tape in this fully restored version, remixed with THX sound, for their “masterpiece collection.” Originally, it was sold at the Disney store for $21.99 and this particular edition has a cute sticker offer of $5 off for Ragu.

In light of its final selling price of $5,344.99, these early prices make it seem like a miracle to find at a thrift store. However, they rarely sell for this much, and this one has the added benefit of being sealed in the shrink-wrap.

Casting the singer Peggy Lee as the singing pound dog prostitute could be considered the first time a major celebrity voiced an animated character, something which is now extremely common. She later sued Disney, claiming a breach of contract, and was awarded $2.3 million. 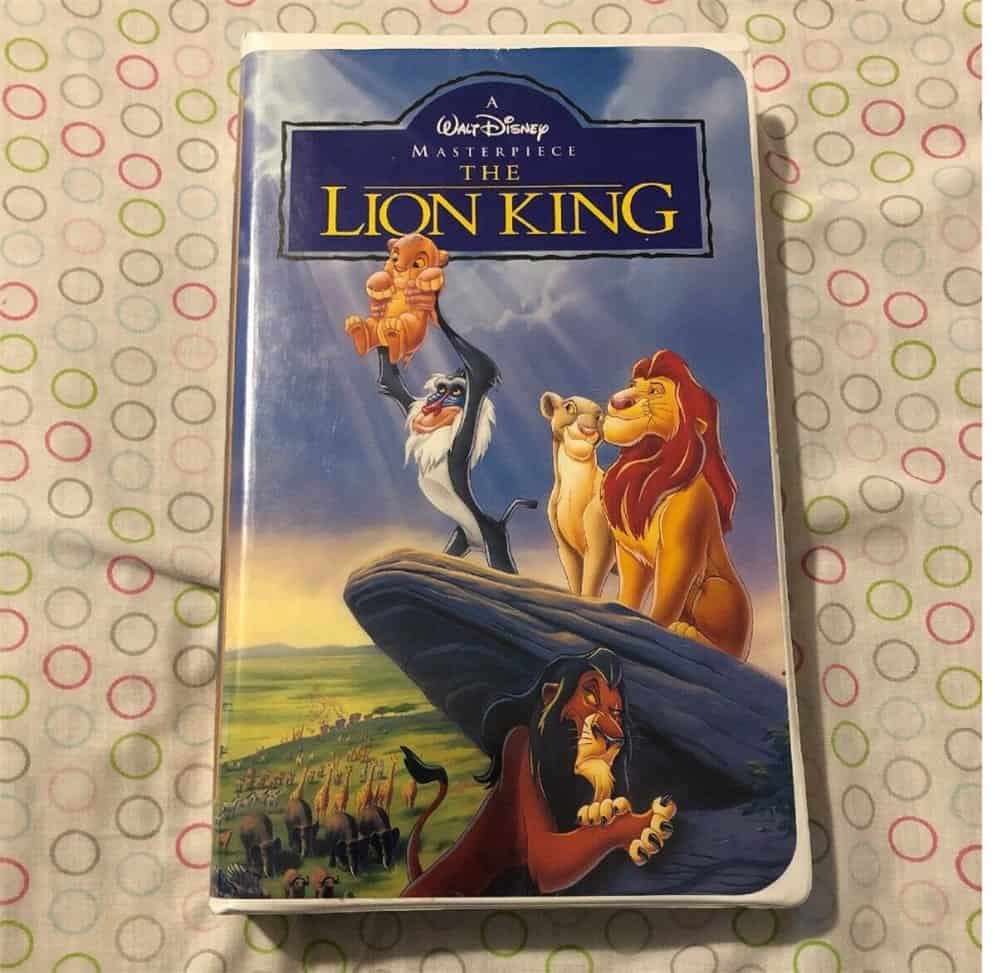 The Lion King was welcomed into Disney’s “masterpiece collection” with this clamshell. Unlike the black diamond edition tapes, this one may be part of the trending price hikes on Disney VHS tapes rather than being actually rare. It sold on September 26, 2021 for $6,750.

The listing does not explain the high price. Presumably, someone just loves The Lion King that much (in their defense, it’s pretty iconic).

Disney didn’t actually have much faith in The Lion King at the time of production, a loose adaptation of Shakespeare’s Hamlet with animals. They put their “B” team or second-string animators on the project, saving the more experienced team for Pocahontas, which they expected to be the bigger of the two films. 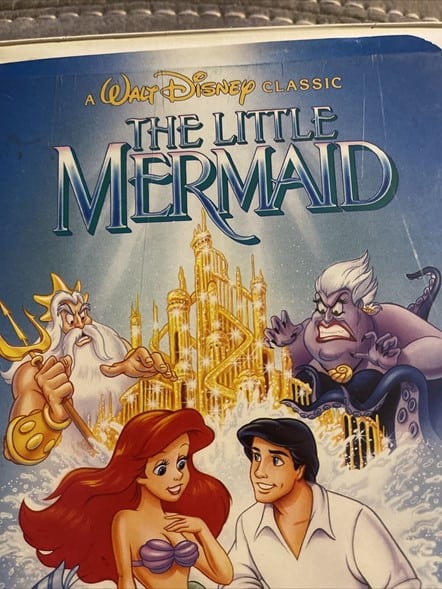 The Little Mermaid is the film that kickstarted the Disney Renaissance, the period where Disney made most of the films now considered the favorites. This black diamond clamshell sold for around $9,500 for a few reasons, the first being the allure of these “rare” editions.

The second is this “banned” cover, though that word is not quite accurate. Disney pulled the cover from circulation and replaced it with another when it was brought to their attention that one of the center towers in Atlantis looks like male genitalia. The artist responsible claimed it was a coincidence.

Half-human, half-fish people are well-known as merfolk or mermaids. But Ursula, half-human and half-octopus, is a lesser-known mythological creature called a “cecaelia.” 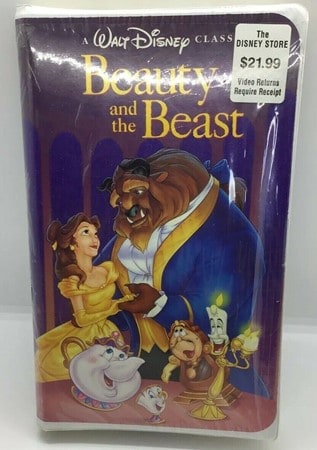 Beauty and the Beast is arguably regarded as the best or near-best of Disney’s Renaissance films, which they made from the period between 1989 and 2000. It combined CGI and traditional art elements for the first time, as well as a few songs now synonymous with love and childhood.

To own this tale as old as time in its black diamond edition clamshell, one fan paid $10,000 earlier this year. Notably, Beauty and the Beast is one of the best bets for scoring a price like this, in addition to being the 2nd highest overall. The top 20 most expensive tapes on eBay feature more than one copy of this timeless classic.

The beautiful ballad, “Beauty and the Beast,” one of the last songs written by Oscar-winner Howard Ashman, was offered to Angela Lansbury, the voice of Mrs. Potts. But she protested, suggesting that another character with a more trained voice would be better singing the song. Directors Trousdale and Wise convinced her to record one as a back-up. As soon as they heard it, they knew that would be the one that made the final cut. 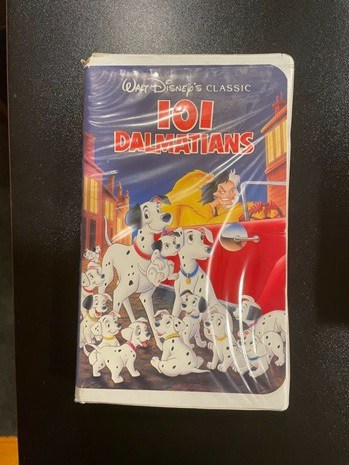 The black diamond on the side indicates the collector’s cue to spend insane amounts on this tape. To view the adventures of Pongo and Perdita in this classic clamshell (chipped, no less) cost one “lucky” person $14,000 on eBay in September of 2021.

The spots of the dogs proved a near-impossible problem for the animators until they realized that rather than draw them on every cel, they could use Xerox or dry photocopying to lift the spots from one frame to the next without doing them all manually. The process leaves the film looking sketchy and loose because actual pencil drawings are making it onto the screen.

These Disney VHS tapes contain some of the most well-loved animated films of all time. Whether they are actually worth the amounts they sometimes sell for on eBay remains to be seen. Regardless, they are rare, coveted, and sometimes exorbitantly valuable collector’s items. Most own 101 Dalmatians for free, for $25, or for the price of a Disney+ subscription. But if you want to pay $14,000 for it, you always could.