9 Most Expensive Supreme Items Ever Sold

They specialize in many types of fashion accessories but have also branched out into cross-brand promotions for other types of items. Continue reading to learn about the most expensive Supreme items out there. 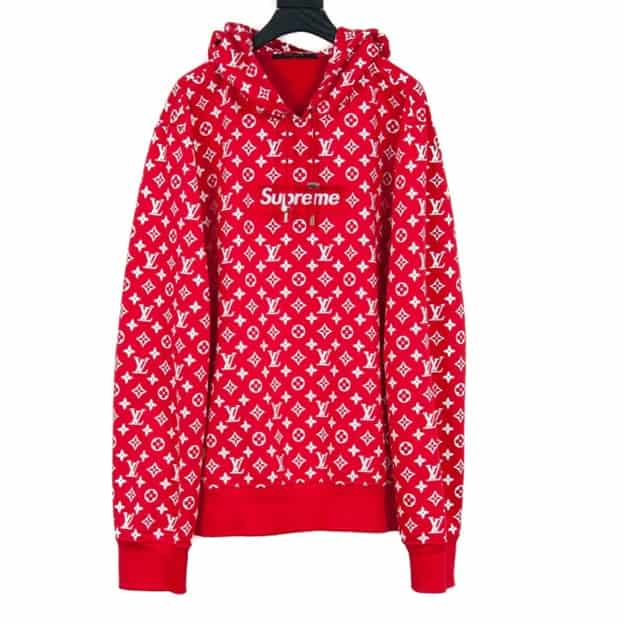 The Box Logo Hoodie is a Supreme x Louis Vuitton collaboration, which definitely won’t be the last time you see those two names together on this list.

This bright red hoodie jacket, plastered with the LV monogram pattern with a Supreme logo in the middle, can now be bought on The Echelon for $7,850 in its rarest size (5L).

The box logo merchandise through Supreme is so valuable that there are a lot of fakes out there made by people hoping to turn average hoodies into huge resale value. To accomplish this, sellers often print fake washing labels. Look for bolder lettering, as well as a wider, shorter tag. 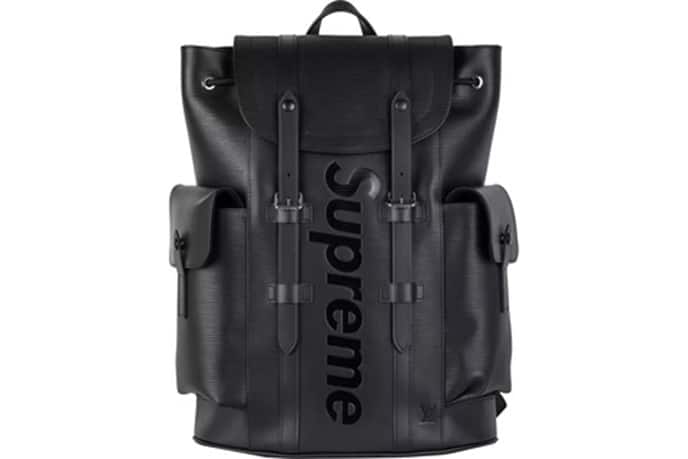 The Louis Vuitton x Supreme Christopher Backpack is a sleek collaboration between the Supreme and Louis Vuitton fashion brands for their Fall 2017 menswear show (in Paris, of course). The black backpack has gloss-black logos in that fashionable Futura Heavy Oblique font.

It’s made from LV’s epi leather, completed after weeks of rumors that the two brands were cooking up something new.

This backpack originally retailed for $3,900 but is now more highly prized for its rarity, selling for up to $14,450 on the aftermarket.

Louis Vuitton created epi leather to give their accessories a unique look. It’s a style of pressed leather stamped with patterns and then dyed. Finally, the leather is coated in a protective gloss that helps it resist water.

LV handbags are famous for their use of epi leather, which has a very famous look, like normal leather but with a textured horizontal pattern. 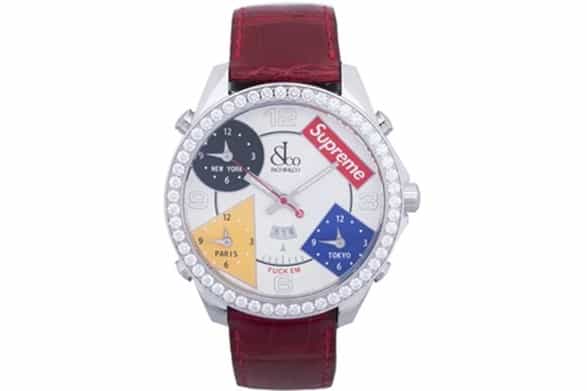 The Supreme Time Zone is a 40mm watch made in a collaboration between Supreme and Jacob & Company. This watch glitters, and no wonder why – its bezel features 51 white diamonds encrusted around the edge.

The watch features several complications, which are the separate faces and components on the main dial. These include time zone counters for Paris, Tokyo, and New York. This watch was released for Jacob & Co.’s October 2020 collection and came with a display box.

The watch originally retailed for $15,740. Now, its resale value is about the same, with examples on StockX selling for around $14,500.

Jacob & Co. was founded by Jacob Arabo, who immigrated from the USSR to take his jewelry work and apply it to luxury watchmaking. After working for others for a while, he opened the Jacob & Co. label in 1986. His real windfall came when the supermodel Naomi Campbell wore his Five Timezone watch in a major photoshoot. 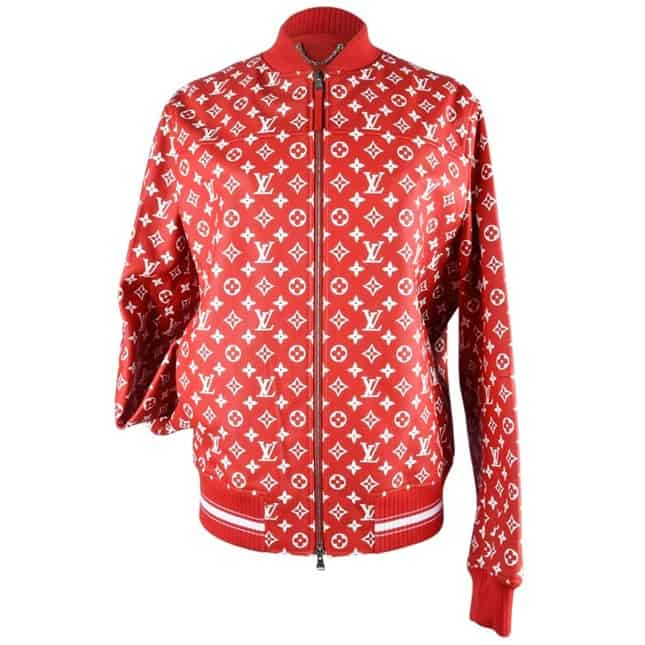 The Louis Vuitton Supreme X Leather Bomber Varsity Jacket was made in a collaboration between the two fashion designers in a limited edition of 50 examples. It’s monogramed with the classic Supreme luggage trunk pattern on a field of bright red.

The collection sold out almost immediately so any examples on the aftermarket are naturally going to be driven up in price by scarcity. The one currently being sold on Mighty Chic is a size 50, listed as new, still in the signature Supreme box. It’s being sold for $19,775.

Varsity jackets are known as the “uniform of winners” due to their traditional use in sports teams, educational academies, and other activities. They evoke pride in one’s team or school and were typically sold in versions with specific organization colors.

The varsity jacket was started at Harvard back in 1865. Today, it’s a more generalized luxury fashion statement outside of academia, which this Supreme x LV collaboration has capitalized on with their own bomber jacket. 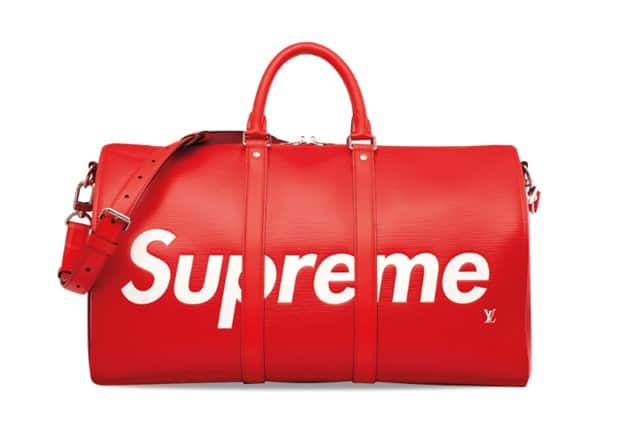 The Louis Vuitton x Supreme Keepall Bandouliere originally sold for $3,650. It was originally available in 4 sizes, sold as a weekend bag with leather handles, a removable shoulder strap, and silvertone accent hardware.

It was made from epi leather, the iconic Louis Vuitton custom leather, showing off its iconic horizontal grain.

The Louis Vuitton Keepall was first introduced in 1930 and remains their oldest bags that they still make today. 140 years later, Supreme started in 1994.

Then in 2017, they combined for the Paris Men’s Fashion Week in January. This Keepall now sells on the aftermarket for over $28,662 or more.

Supreme is not the only brand collaboration with Louis Vuitton. The designers Stephen Sprouse and Takashi Murikami have also designed Keepall bags with them. 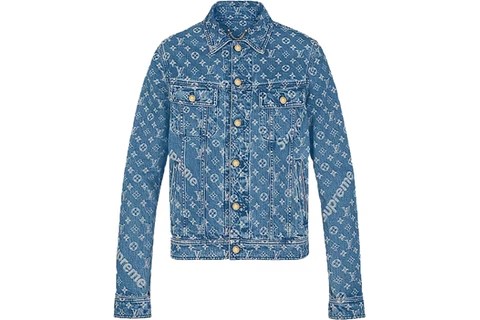 The Supreme Louis Vuitton Jacquard Denim N-3B Parka is yet another piece of the collaboration between Supreme and Louis Vuitton, which is selling on StockX for various prices depending on the size of the jacket that each seller has. This includes a low asking price of $17,125 for the EU 54 size up to $30,000 for the EU 58 size.

Keep in mind that these sizes are relative to Louis Vuitton’s non-standard company sizes, not to any other standard sizes. When it came out in 2017, this denim-blue jacket retailed for $1,375.

Denim jackets have fallen in and out of style repeatedly since being invented in the 1800s, around 1805, for a fashion collection for the German Historical Commission of Rhineland.

Now, these jackets are most commonly worn in the American mid-West, though the trendy-expensive combination of LV x Supreme is pretty universal. 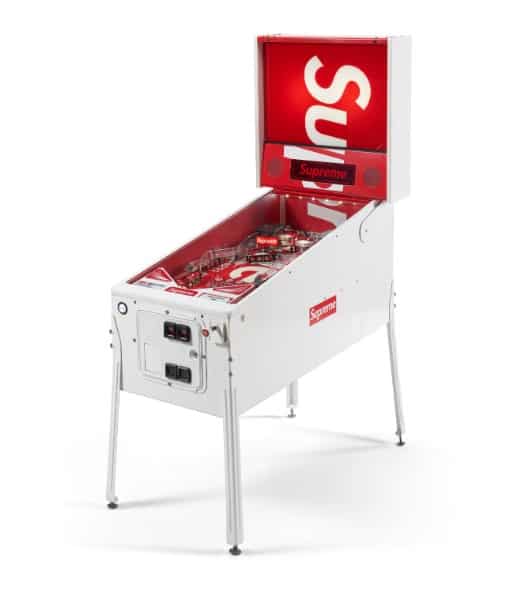 This pinball machine was only made 12 times, each sold for a retail price of $11,000. One of the machines was set up in the Manhattan bar, Max Fish, and this one sold for this record-breaking amount.

The NYC favorite seafood restaurant Max Fish was opened in 2007, first in Glastonbury. It was a spiritual sequel to the 1996 restaurant, Max on Main in Connecticut. 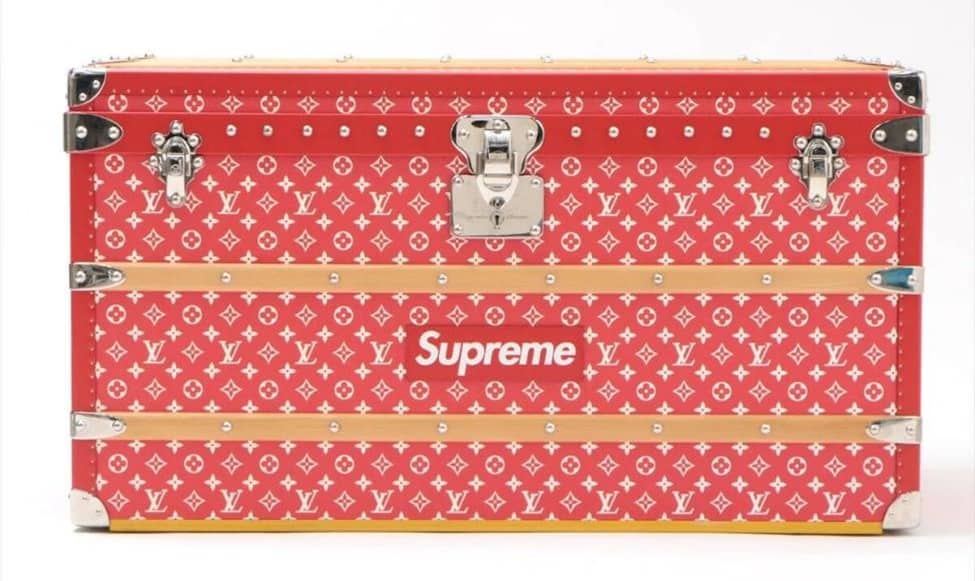 The Malle Courrier 90 Trunk is arguably the most iconic Supreme item, definitely the one that most capitalizes on its frequent collaborations with Louis Vuitton.

Vuitton, as you may know, began life as a luxury trunk designer before dabbling into all manner of fashion and accessories. This trunk was part of the two brands’ combined Fall 2017 lines.

The trunk is bespoke, meaning it’s only made to order. The exterior is exquisite leather while the inside is quilted paneling. This French masterpiece is very rare, leading storefronts like The Echelon to sell even slightly shelf-worn examples of the Malle Courrier 90 Trunk for prices as high as $124,995.

“Malle Courrier” is French for “mail trunk,” of which Louis Vuitton sells quite a few. This includes the highly desirable current fashion trunk, the Courrier Lozine 110, which sells for $46,500. 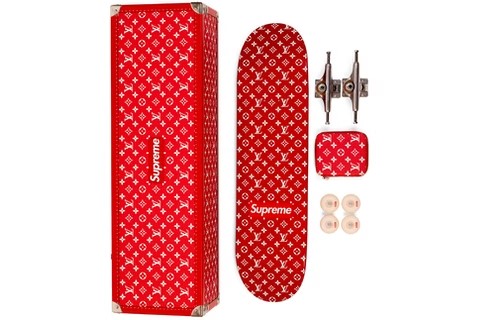 The most expensive Supreme Item is the Skateboard Deck (Monogram Red). It was made like many of the items on this list in a collaboration between the luxury clothing brand, Louis Vuitton, and Supreme. Even at retail, this piece cost $54,500 due to its limited production.

The skateboard comes with that bright Monogram Red Supreme color and Supreme trunk graphics. Now, if you want this Skateboard Deck, you’ll have to shell out $184,290 on StockX. Keep in mind though that none have ever sold on StockX and only one is currently available, which may be why this seller can ask for so much.

Louis Vuitton was only 16 when he went to Paris with a dream of being a product designer and mogul, starting as an amateur trunk-maker. The Supreme skateboard is just one more bit of proof that he succeeded.

10 Most Expensive Toothpaste in the World