Almost all of the world’s most expensive shoes are Nike brand. These expensive sneakers typically get their insane price tags because iconic athletes and other celebrities either wore them or helped make them. A lot of expensive Nikes are limited edition too, which only makes the price climb higher.

Nike used to be called Blue Ribbon Sports. The brand was founded in 1964 by a track and field coach named Bill Bowerman. Although the company is well-known for shoes today, Bill didn’t start selling footwear until 1972.

Today, Nike is the most popular sports shoe brand in the U.S. — and with all that popularity comes some pretty expensive sneakers. Here are the top 10 most expensive shoes ever sold. 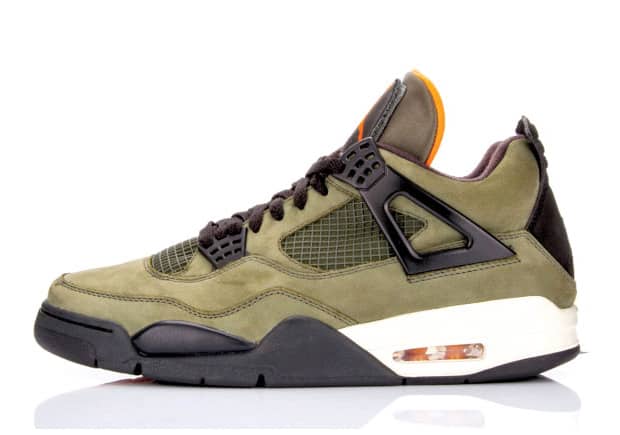 The Air Jordan 4 “Undefeated” was made in 2005. Incredibly, only 72 pairs were made, so the price was destined to be high. Some reports say sneaker fans could enter a raffle with the hope of winning the chance to buy a pair, other reports say the shoes were given to “friends and family” and never released to the public.

Either way, these shoes are rare and expensive. In July 2016, a pair sold at Stadium Goods for an astounding $18,500. The extremely expensive shoes feature suede exteriors with a black, brown, and white colorway. Would you buy these?

Reportedly, Stadium Goods originally charged $24,500 for these sneakers. It’s not clear how the buyer got away with that lower price. 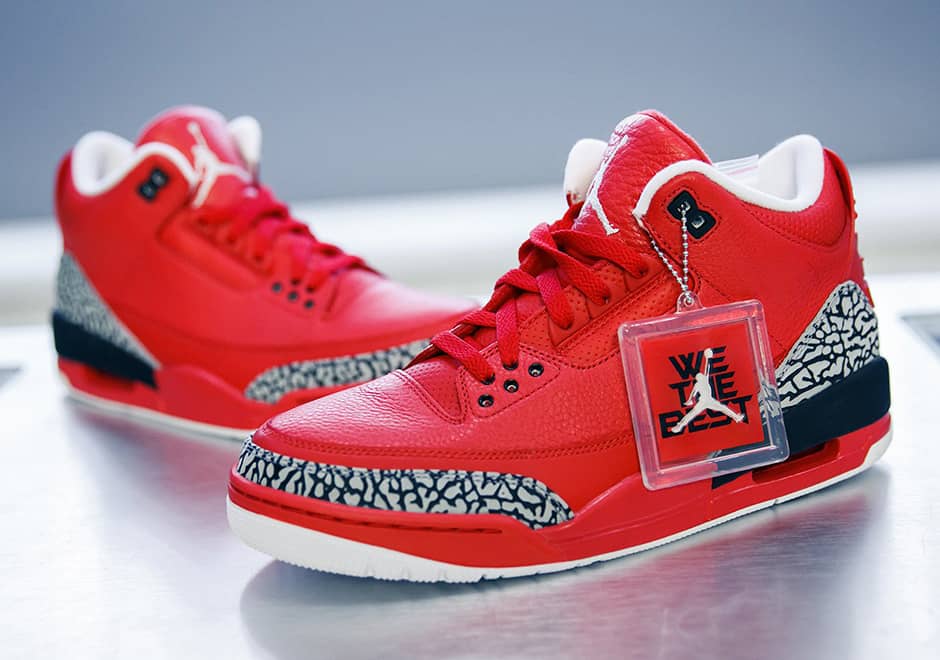 There have been a lot of expensive sneaker collabs over the years. In 2016, Pharrell released a limited edition set of 300 pairs with Adidas. Those shoes easily sell for $5,000 — but that’s nothing compared to these sneakers from DJ Khaled and Nike/Air Jordan.

DJ Khaled was made a Jordan Brand Ambassador in 2017, and that came with the perk of designing a new pair of shoes. The DJ Khaled x Air Jordan 3 “Grateful” line came out around June 2017, with some selling for $30,000.

The shoes mainly feature red, but there are some black details and of course the Jordan logo. These sneakers also feature one of DJ Khaled’s catchphrases: “We the best.”

DJ Khaled owns about 10,000 pairs of shoes. He keeps around 500 of those pairs in his personal sneaker closet. Who knows where the rest are! 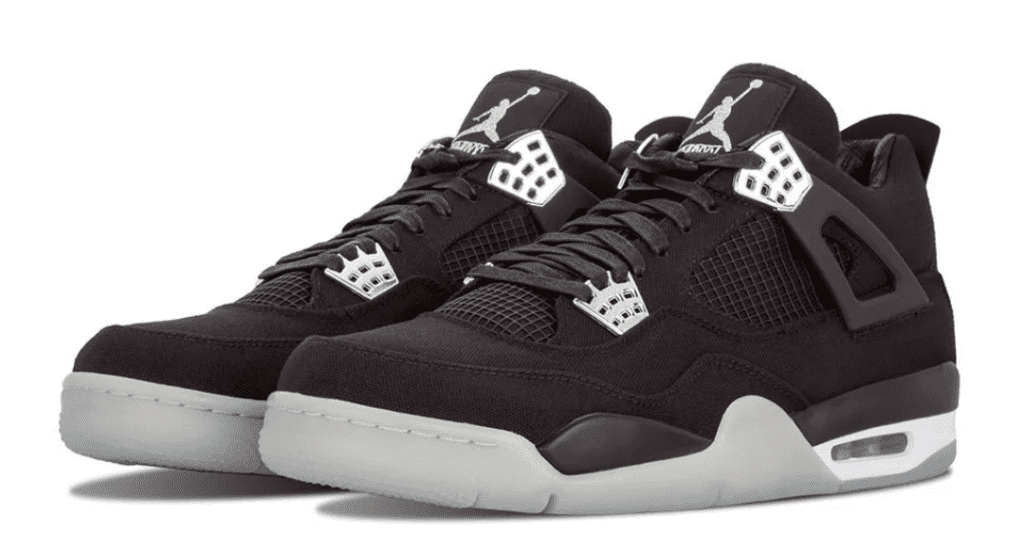 Next up is another Jordan collab. This time, rapper Eminem partnered with Jordan and Carhartt to make a limited-edition sneaker. The shoes feature an industrial style, with black and gray coloring alongside silver details.

While a lot of expensive sneaker collabs are arguably about the hype, this release actually had something more in mind. With the most expensive pair going for $30,100, the money from this collab was ultimately donated to Michigan State University’s Community Music School (a program supporting struggling students and isolated community members).

Like other expensive shoes, these sneakers weren’t sold in retail stores. Instead, they were released on eBay. In the end, the eBay auctions raised over $220,000! 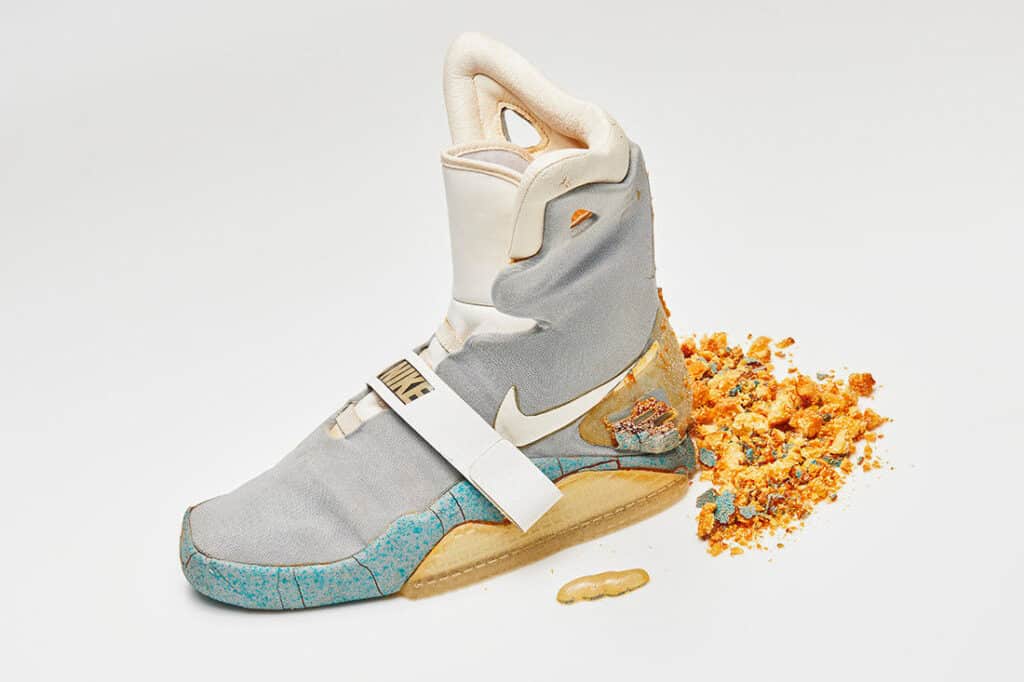 The Back to the Future series has a lot of iconic moments, but one of the most famous is probably the scene where Marty McFly’s shoes tie themselves.

Around 2018, the actual prop shoes worn by actor Michael J. Fox on set were sold for more than $90,000. Incredibly, the shoes weren’t even in great condition. Part of the exterior heel was rotting away and portions of the upper body were pretty damaged.

Originally, these shoes were auctioned off for a whopping $200,000 in 2017. It’s not clear why the price dropped so dramatically, but the damage could be part of it.

These shoes feature LED lights in the heels. 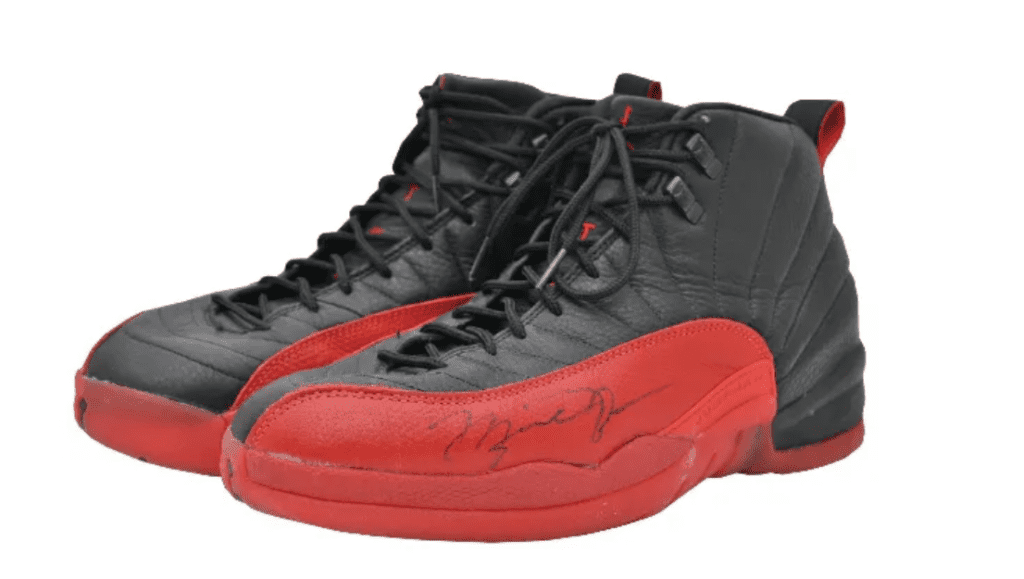 Michael Jordan might just be the most famous and the best basketball player of all time. He had a lot of iconic moments over the course of his career, but the Flu Game is probably one of the most well-known.

What’s the Flu Game? The exact history is a little murky and contentious, but the basic story goes like this: Jordan was extremely sick but he still played (and won) game five of the 1997 NBA Finals.

Years later, the shoes Jordan wore that day were auctioned for an incredible $104,765. Interestingly, the shoes were put up for sale by a ballboy for the Utah Jazz — the team Jordan played against in 1997. As it turns out, Jordan gifted the shoes to the teenage ballboy after winning the game.

Whoever bought these shoes also got the socks Jordan wore during the Flu Game. 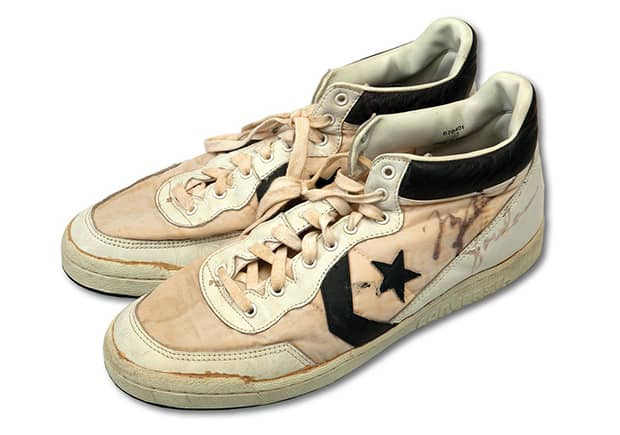 Next up is another pair of shoes worn by Michael Jordan. This time it’s a set of Converse Jordan wore during the 1984 Olympic games when he beat Spain by 20 points. These shoes also ended up in the hands of a ballboy after the game.

Years later, the shoes were auctioned for a staggering $190,373, about 85,000 more than Jordan’s Flu Game sneakers. Interestingly, the shoes still have Jordan’s orthotic inserts.

These autographed Converse Fastbreak Mids are considered to be the last gameday shoes worn by Jordan as an amateur. It’s also reported that these were the last Converse he wore during an official game. 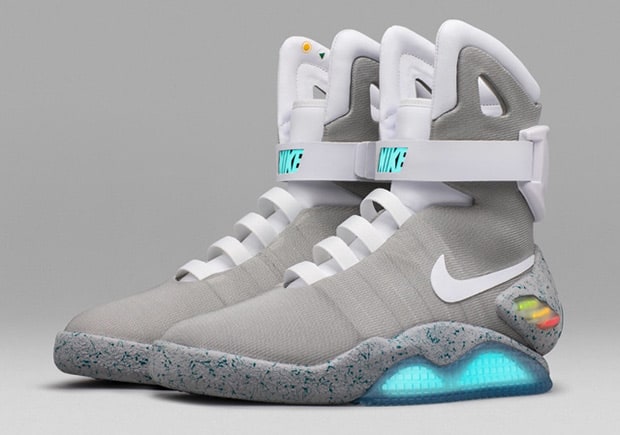 These shoes were modeled after the self-lacing pair worn by Mary McFly (Michael J. Fox) in Back to the Future.

The expensive sneakers were designed by Nike and sold to benefit research in the battle against Parkinson’s disease. The fundraiser was a partnership with the Michael J. Fox Foundation for Parkinson’s Research. Fox was diagnosed with Parkinson’s in 1991.

Only around 89 people were able to get their hands on a pair of these special shoes.

Price: $437,500
Brand: Nike
Interesting Fact: Only 12 pairs were made
Colorway: Black and white 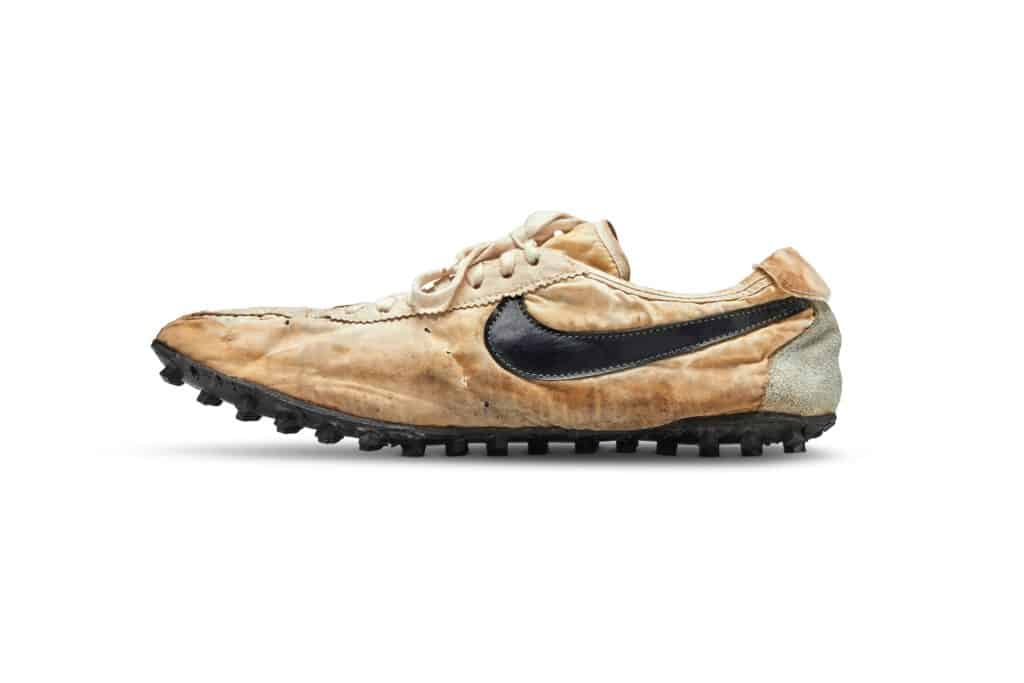 Nike’s Moon Shoes were among the earliest athletic sneakers designed by the brand. Only 12 pairs were made, with each set going to the 1972 Olympic trials.

With such a deep connection to the history of sports and the Nike brand, it’s not surprising that the sale price was very high. Still, $437,500 seems like a lot.

The shoes feature a basic black and white colorway, with the iconic Nike swoosh set on the exterior. Although 12 pairs were originally made, reports say there aren’t any other sets of Nike Moon Shoes left in the whole world.

This rare pair of Nike sneakers was handmade by one of Nike’s earliest employees: Geoff Hollister. 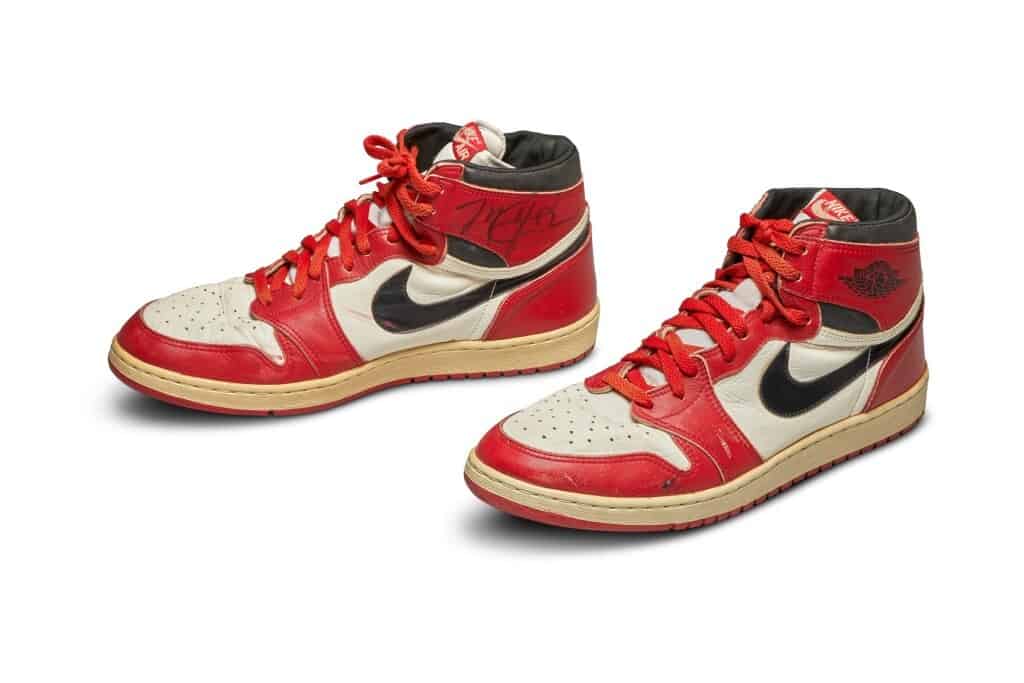 Next is yet another pair of Jordans worn by none other than Michael Jordan himself. Jordan wore Air Jordan 1s between 1984 and ‘85 before a modified version was specially made in ‘86 to account for Jordan’s broken foot.

Known as the Chicago colorway, these shoes feature red, white, and black alongside the iconic swoosh. The pair sold for more than half a million dollars in 2020, setting a new record.

Although Jordan wore Air Jordan 1s in ‘84, this exact pair was made in 1985 according to coding inside the sneakers.

These shoes were auctioned by Sotheby’s. They sold for three times their estimated value and the price rose by $300,000 in the last 20 minutes of bidding. 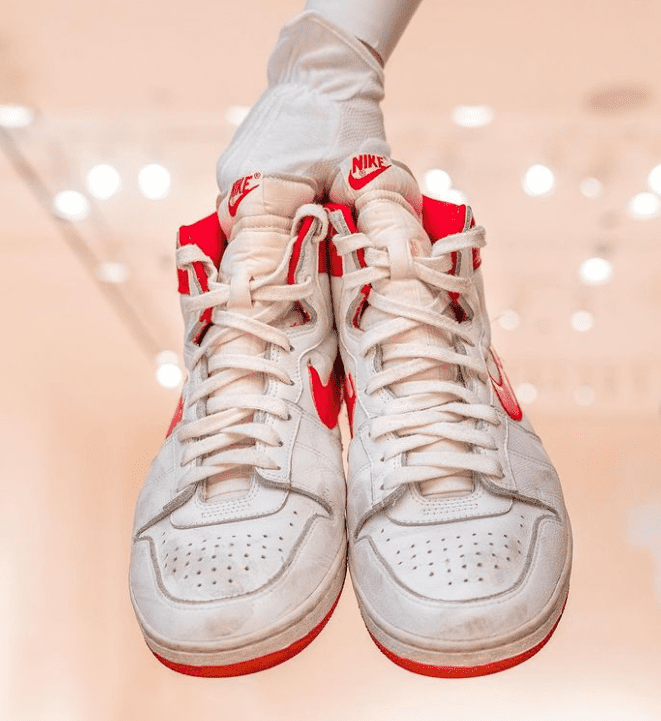 Michael Jordan’s Rookie Season Shoes are the most expensive shoes ever sold.

With a final auction price of 1.47 million dollars, these are by far the most expensive sneakers ever sold. The historical shoes were worn by Michael Jordan during his rookie season. Like other shoes worn by Jordan, the autographed pair was gifted to a ballboy named Tommie Tim III Lewis after a game.

Like most other shoes on this list, these sneakers are Nike brand. The shoes came before Jordan’s own clothing and shoe line with Nike, a business partnership that made him a billionaire.

These white and red shoes are the earliest regular-season pair from Jordan’s career to go up for sale.