No Man’s Sky was released in 2016 by Hello Games, a developer that hails out of Guildford in the United Kingdom. Previously, they were best known for the Joe Danger series. This procedurally generated exploration, survival, science fiction game was met with incredible hype that was only matched by disappointment on launch day. The problem was that the promise of an infinite amount of potential content could not compete with the even greater than infinite expectations for the game’s design.

However, since launch, Hello Games have added many updates, patches, and changes. The community of players has grown and continues to encourage itself to create guilds, launch new initiatives, and expand the game’s infinite content with user-generated activities.

Naturally, in any procedurally generated game, certain items become outrageously expensive and rare. These items have become not only highly valued in trades but near-mystical in single-player runs as sightings can be as scarce as a thousandth of one percent.

Keep reading to learn about the 8 rarest things in No Man’s Sky. 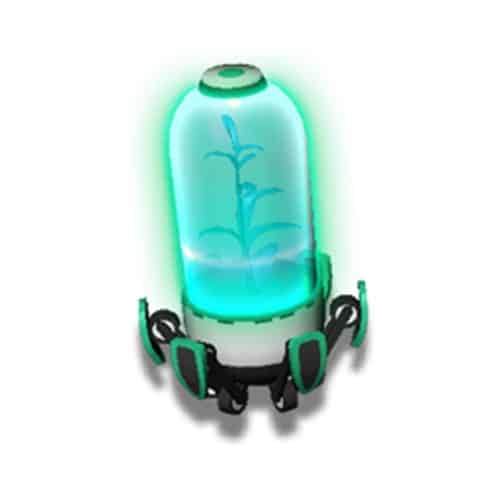 Delicate Flora is an artifact in No Man’s Sky contained in the update called, Frontiers. The five rarest delicate flora are Lost Mistfruit Sprouts, Fresh Honeypalm Clippings, Thiefthorn Tubers, Hybrid Swampflex Tubers, and Toxic Lureparsley Clippings. The most valuable of these sells for 2.291723 million units in trade.

Players who find Large Artifact Crates in Ancient Ruins stand the best chance of finding Delicate Flora. They can also be rewarded for completing exploration missions or by opening Emergency Containment Device anomalies. The trick, however, is in not only finding a delicate flora but in finding the most valuable ones. 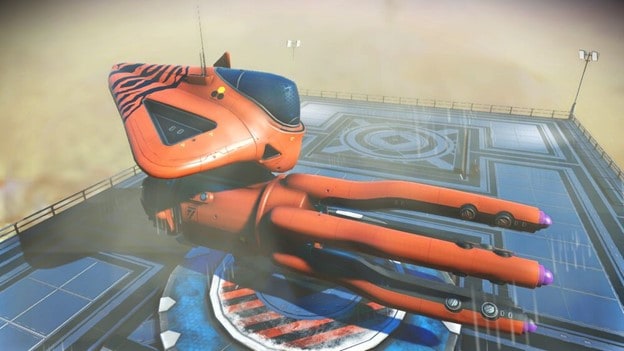 The exotic ships with the squid hull designs have become extremely desirable due to their rarity, though they lack customization options. All have the signature tentacle and abdomen shapes in one of hundreds of possible colors.

Those who seek a squid or calamari ship in a specific color will have a tough time searching the Eissentam galaxy for one, where most of these ships are found. Focus on the Nijhwal Boundary and Omskio Instability.

Squid-style S-Class exotic ships always come pre-fitted with great thrusters and a custom rocket launcher. They have 20 inventory slots, six tech slots, and sell on the market for about 12 million units. Ever since being introduced in the Beyond content update, these ships have only gotten more popular. 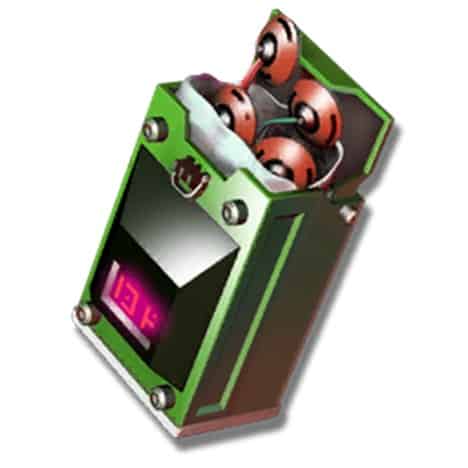 Stasis devices are incredibly rare, quickly becoming one of the rarest items in the game, with a trading value of 15.6 million units. The item is valued for its ability to maintain the lifeforms of an ecosystem for millennia longer than its natural life cycle. To craft a stasis device naturally requires the use of other items that are almost equally rare on their own, including a quantum processor, iridesite, and a cryogenic chamber.

It was added as a product in the Origins update and reduced in price after Visions. Before that, stasis devices were worth 18 million units and were barely attainable.

Only two items in the game have the distinction of being highly refined technology, valued at insane tradable amounts. The second is the fusion ignitor, which we’re about to get to. 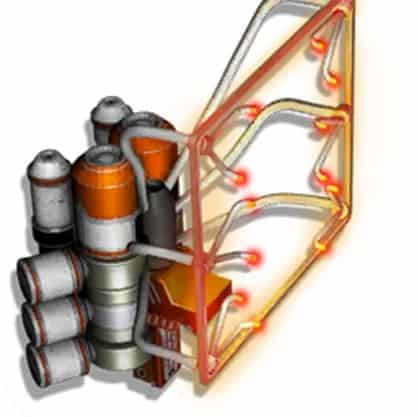 The fusion ignitor is a craftable, tradeable item valued at 15.6 million units. Along with the stasis device, it is the only item whose rarity and utility earn it the name of highly refined technology. Fusion ignitors are practically required for players who want to take their power plants to the next level, building efficient fusion cores that can power all their stuff.

Fusion ignitors were added as a product in the Origins update and like the stasis device was reduced in value from 18 million units after Visions.

Fusion ignitors can only be crafted from other rare items, specifically a portable reactor, quantum processor, and geodesite. 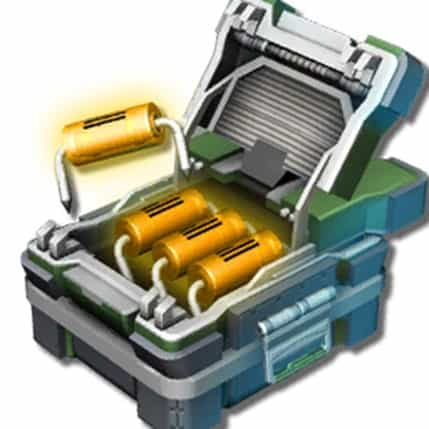 Any No Man’s Sky player knows the value of the starship, practically the only item in the game completely necessary for all progression. And the most valuable tradeable component of any starship is the Starship AI Valve.

It can only be obtained at Space Stations using a Starship Outfitting Terminal. These terminals allow players to scrap their ships for units, the most valuable piece of which is the AI Valve, which has a reclaim value of around 50 million units. Along with the valve, players also receive a stack of Iridesite or Geodesite and a stack of random activated stellar metal.

Starship AI Valves have the single highest base value compared to all obtainable items in No Man’s Sky. It beats the priciest craftable items, seen earlier on this list, and can be stacked to a maximum of 5 if some crazy player ever accumulated that many. 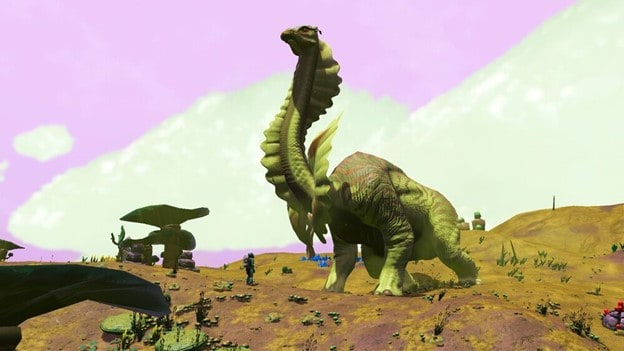 The Rangifae are an exceptionally rare class of terrestrial fauna in the game. They look like dinosaurs and feature long necks, with variations such as frills, arched or flat backs, bone protrusions, sails, and more. More commonly known as “Diplos,” these creatures have a 0.25% encounter rate per planet, meaning that players could conceivably play their entire adventure 100 times and never see one.

This is why some players hunt Diplos specifically, a pastime that has become increasingly important ever since Hello Games updated the capital planet to change the grass type, rendering the Diplo extinct there.

Players have created a repository that collects and monitors diplo sightings across the No Man’s Sky universe. It not only keeps everyone up to date but even supplies glyphs for players to visit such planets. The Diplo has since become the emblem of the Galactic Hub Community, a fact openly acknowledged by the developer in the form of an emblem that includes the mighty diplo. 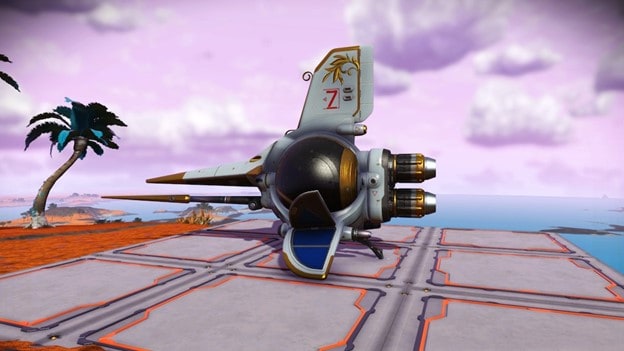 Most Type-7 ships have single or dual thrusters. To see one in white or gold with the extended dual thrusters is one of the rarest possible finds in No Man’s Sky. Even those who can find this ship will most often find them in copper.

Type-7 variant ships are exotic ships, meaning they come in only three shapes and may be either ball or squid designs. This exotic ship type is noted by its pronged nose. The red seven on the upper dorsal fin under what is known as the acanthus ornament adds to the ship’s rarity and turns an already rare Type-7 starship into the even more coveted Royal Type-7.

Ships like these with no wings have bottom fins and big boosters, which open during hyperdrive. When landed, the ship’s bottom fins open and solar panels come out to signify that the ship is charging. Though this has no effect in-game, it adds to immersion and gives the owner of this rare ship another little nugget of interaction to be proud of. 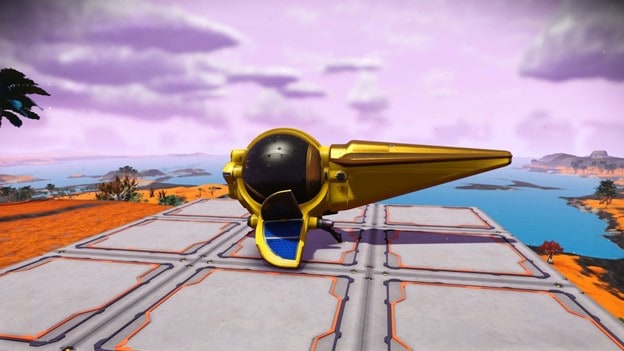 The rarest thing in No Man’s Sky is the Gold GUPPY ship with Cowled Rear Thruster. It completes the set of three exotic ships, any of which are near impossible to lay your hands on. Exotic ships are S-class ships and provide the player bonus values in the top tiers of their categories, within a randomly generated range. This includes a 50-65% boost to Hyperdrive range, 55-60% Shield boost, and 35-50% increase in DMG.

You would be able to buy an exotic ship for around 15M units at the most common colors and configurations, but that assumes someone finds one and sells it. Finding the coveted gold model with these specific thrusters is almost unheard of.

While there is an unlimited number of ship variants that could spawn, ships in No Man’s Sky are separated into six categories: Fighter, Shuttle, Hauler, Living, Explorer, and Exotic. The player can own up to six ships at once, making it possible to own a fleet of every type and refine them for rarity.

No Man’s Sky did not have the post-release hype it hoped for after all the demos, trailers, and promises. However, content updates and a growing community have rebuilt the game into a user-driven experience in a universe that many explorers now call their virtual home. The items on this list represent the ultimate in collector’s value in the scope of the game, costing millions of units if you’re able to even find one, in the procedurally generated vastness of infinity that the game has created.