Since Hans Wilsdorf founded his timepiece manufacturing company in 1905 (he was only 24 years old!), he had luxury on his mind. He fashioned his watches with luxury timekeeping mechanisms made by Bienne in Switzerland to bring the most accurate watch manufacturing to a consumer’s level. Since then, Rolex has never stopped being synonymous with luxury consumer watches. Just as all luxury hot tubs are incorrectly called “jacuzzis,” the most expensive watches are referred to as “Rolexes,” even when they aren’t one.

The Most Expensive Rolexes You Can Buy 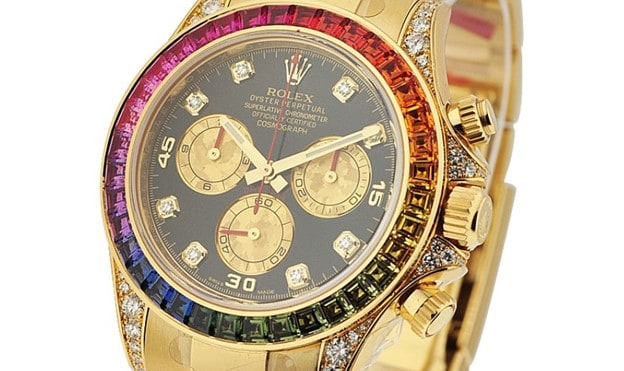 The first Rolex we’re talking about is the Daytona Rainbow Rolex. It was sculpted from yellow gold with a diamond bezel; even the oyster bracelet is yellow gold. The dial is black diamond.

To own this watch will set you back $459,240, which is almost 4 times the original retail price of $125,000. Why is that? This Rolex had a limited production of 250 units. When there were 250 of them, they sold for $125,000. Now, to own this limited-edition Rolex in an unworn condition is a considerably rarer and more valuable proposition.

A bezel or “bezel setting” is more common in jewelry manufacturing. It refers to the thin rim of metal that encases a rare stone such as a diamond. It protects the stone from falling off while advertising its beautiful look.

Diamond bezels are now widely associated with Rolexes due to the customization options available. Many buyers already spending hundreds of thousands on a watch leap at the chance for added luxury. 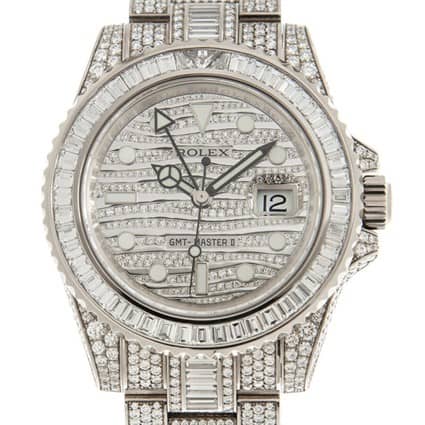 The case of the GMT Master II Diamond Authentic Men’s Watch is sculpted from 18-karat white gold. It’s inlaid with diamonds and fixed against a white gold bezel, also set with more diamonds. The bracelet is white gold and, you guessed it, also covered in diamonds. Diamond lovers jump at the chance to pay $465,000 for this luxury Rolex.

The watch may be luxurious, but it’s been sculpted in a casual style, implying how Rolex combines luxury manufacturing with consumer usage. To that end, the watch is waterproof up to 330 feet (100 meters) for use by luxury sportsmen. 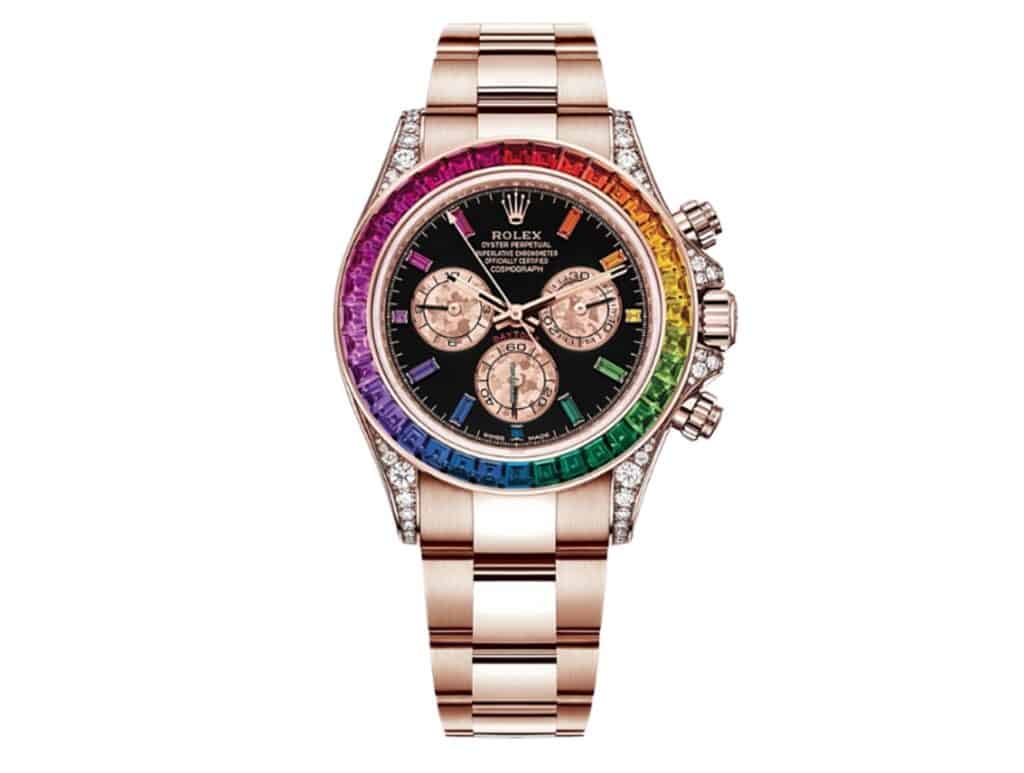 This Daytona Rose Gold Rainbow Diamond Rolex, for lack of a better name, is one of the more colorful watches on this list (see below). The case is 18-karat rose gold and striking on the shelf against its siblings. The hour markers are encased in rainbow against a black dial; even the hands are made of rose gold.

The diamond bezel and rainbow inlay are intended to bring the watch a feminine touch, as this was marketed as a Rolex “for women.” The whole thing is brought together by an 18-karat rose gold Oyster bracelet and a price tag of $514,800.

This watched is powered by a self-winding chronograph, 4130 caliber. Rolex’s first-party mechanical chronograph in these Daytona watches is one of the things that put it on the map. Their patented technology uses a vertical clutch rather than the standard lateral clutch. Without getting too into it, this allowed Rolex to build the mechanism with fewer parts, a larger tension spring, and a larger power reserve than its previous iterations. 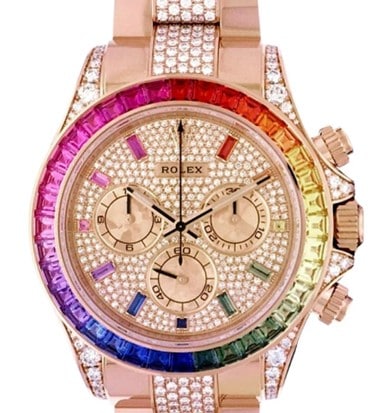 The Rolex Cosmograph Daytona Everose Rainbow Watch was crafted from 18-karat yellow gold and stainless steel. This Rolex is the most expensive you can currently buy, clocking in at $582,000 off the shelf. The 40mm dial is made from paved diamond. The body and band of the watch are sculpted from Everose Gold, a Rolex-branded luxury metal.

Everose Gold, like standard rose gold, is a mix of metals, including silver, copper, and yellow gold, which gives it its signature color. Since the gold used in Rolex watches is 18-karat, 75% of Everose gold is gold. But unlike rose gold, it doesn’t contain as much copper, which changes color over time as it oxidizes.

Instead, Everose gold was created using about 2% platinum, which makes it a metal alloy unique to Rolex and one that will never lose its color.

Most Expensive Rolexes Ever Sold 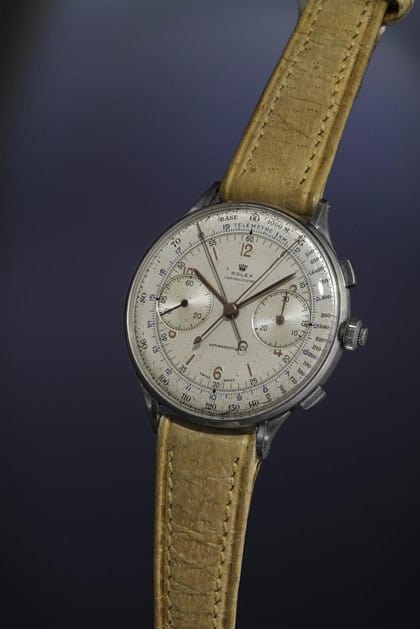 The Antimagnetique Reference 4113 Rolex is the oldest watch on this list, manufactured in 1942. A Phillip’s auction sold it for $2.5 million in 2016, in Geneva. Buyers were stunned by its 44 mm case, larger than most at the time (and the largest Rolex ever built).

It had already been sold three years earlier for $1.16 million, which serves as a reminder of how vintage Rolexes have skyrocketed in value even just in the last few years.

Only 12 of these Antimagnetique Reference 4113 Rolexes were ever made. As with many Rolexes, this watch was originally presented to the victor of a motorsports racing team. 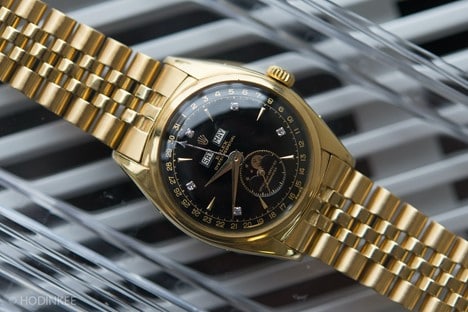 The second oldest watch on this list is the Rolex Bao Dai, sold in 1954 to the last emperor of Vietnam’s Nguyen dynasty. The Rolex known as the Antimagnetique Reference 4113 was the most expensive in their catalog at the time. Its case is sculpted from gold with a black dial. The face has been embedded with five diamonds, making this unique even among the Reference 4113 watches.

There were only three of these Rolexes ever made, though this is the only one with the diamond inlays. The surviving Nguyen family sold it in 2002 for $235,000. In 2017, it fetched $5.1 million at a Philips auction in Geneva.

The Nguyen dynasty was the last in Vietnam. It ruled the country from 1802 to 1884. After that, the monarchy persisted in name only, with pro-war and royalist factions struggling for control of Vietnam against the French occupation. The last emperor of Vietnam, Bảo Đại, was gifted this Rolex in 1954. 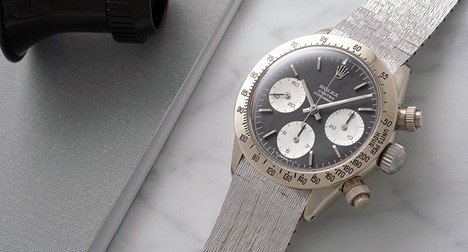 The watch was previously owned by John Goldberger, a collector of fine watches. He sold the Unicorn to benefit the Children Action charity.

John Goldberger’s real name is Auro Montanari. He took the name Goldberger for privacy, for fun, and for the heck of it. The name is actually an interpretation of his birth name. “Auro” sounds like “Oro,” the Italian word for gold, and a “Montanari” in Italy is a highlander, which is close to a shepherd, which is “Berger” in Italian. Auro Montanari à Gold Shepherd à Goldberger. 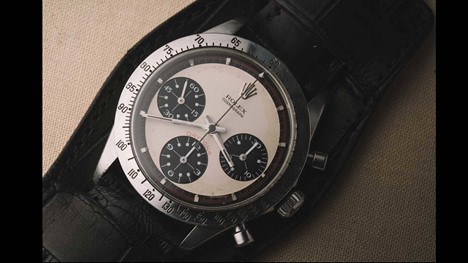 The most expensive Rolex is the Rolex Daytona owned by Paul Newman. Rolex Daytonas are already top-of-the-line watches but this one broke the bank. It not only sold at auction for more than any Rolex in history, but it even became the most expensive watch, of any kind, even against the antique timepieces that are preserved through history and worth millions.

The allure of actor Paul Newman brought this watch’s final buying price to $17.8 million, even though the watch isn’t made of luxurious metals, gold, or diamonds.

Paul Newman is the King of Cool, the actor best known for movies like The Hustler, Butch Cassidy and the Sundance Kid, and Cool Hand Luke. On the set of Winning, his wife, Joanne Woodward, gave him this watch as a present. As Paul Newman died in 2008, he never knew that his allure alone made that piece worth over $17 million.

The Daytona watches are synonymous with professional racing. Newman himself took up racing and continued driving into his old age. The movie Cars makes a reference to this by casting Newman as the old Hudson Hornet, Doc.

In their 100+ year history, Rolexes have become mainstays in luxury athletic watch design, favored by motorsports racers, swimmers, businesspeople, and more. The name “Rolex” has become synonymous with expensive watches.

These 8 represent the most expensive you can buy as well as the priciest ever sold. They epitomize Rolex’s reputation to show that old or new, you will always have to open your wallet all the way to own the best.

10 Most Expensive Toys Ever in the World