Language has guided human history since humans have existed and written language has been instrumental in accounting and literature since 2000 BC. Back then, ancient Egyptians used proto pens made of reeds to inscribe papyrus. History took it from there.

Beginning in 600 A.D., Europeans used feather quills sharpened with a knife, dipped in inkwells, to keep their records. A steel-point pen was invented in 1822 in England, followed by the fountain pen in 1827. This is where the pen’s reputation in the modern world begins.

Pens have always been a symbol of luxury because language has been a domain of the wealthy for a long time. However, now that writing is freely available to anyone, the pen itself has to become the luxury. And these are the most luxurious of all.

Here are the 8 most expensive pens in the world. 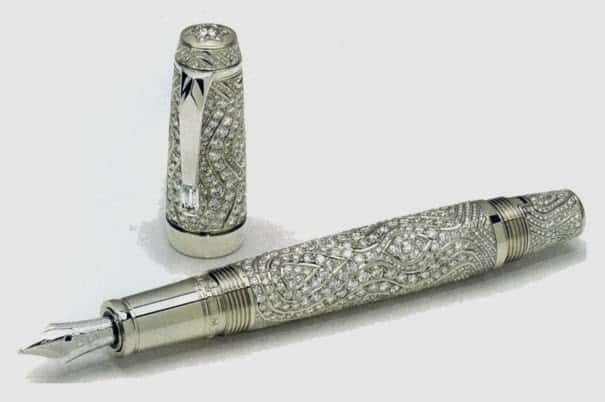 The Boheme Royal by Montblanc is a lavish pen, despite being the first on our list, gilded with 18k white gold and over 1,400 diamonds. The body of the pen has been sculpted from platinum. The diamonds aren’t completely colorless – they have a certain sheen in the light that makes them even more unique.

It should be no surprise that the pen costs $150,000 to own. Even the Montblanc LOGO is a showstopper, comprising a streak of 18k white gold and 19 diamonds all on its own. The pens are named with French phonetics but are made in Hamburg, Germany at a factory that’s been around since 1906.

The most expensive pens in the world are fountain pens due to their complexity and exclusivity. As a modern twist, the Boheme Royal pen has a retractable nib or pen point and is the only pen on this list that has that. Also of note are the famous faces of Cillian Murphy and Peggy Gou, who are the ad spokesmen for Montblanc pens.

La Modernista is a pen created by Caran d’Ache by the jewelry designer Robert Perron. The pen features hard architectural lines, which cut across the pen’s body like stain glass and iron-work lattices. The pen is solid silver coated in rhodium, featuring 5,072 Wesselton diamonds and 96 rubies. These weigh 20 carats and 32 carats, respectively.

The La Modernista diamond pen took 6 months for Perron to make and sold for $265,000 back in 2001. The anonymous buyer now owns the only version of this coveted luxury writing instrument.

The La Modernista pen was designed as a tribute to the architect, Antoni Gaudi, who was instrumental in the Catalan Modernist movement in architecture in the late 1800s. Seven of his buildings have been declared World Heritage Sites, many of which center on religious imagery. This has given the name, “God’s Architect” among afficionados. Does that make La Modernista, God’s Pen? 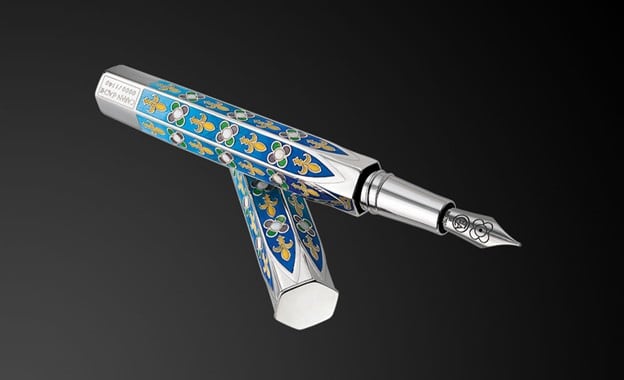 Out of Switzerland, Caran d’Ache creates luxury writing instruments, employing their sculptors as well as exclusive sources of rare stones. This will not be the last time they are mentioned on this list.

The Gothica has been sculpted to resemble Gothic architecture, embedded with fleur-de-lis. The rare stones in this pen include 900 diamonds, 72 rubies, and 72 emeralds.

Caran d’Ache is not a normal-looking Swiss word. That’s because it comes from the Russian word, “karandash,” which means “pencil.” A word also pops in Turkish, “kara tash,” which means “graphite.” This reflects the business’s 100-year heritage, which may be Swiss-made but employs famous designers from all over the world, including those that run training workshops. Thousands of teachers provide art lessons for businesses and hospitals through Caran d’Ache. 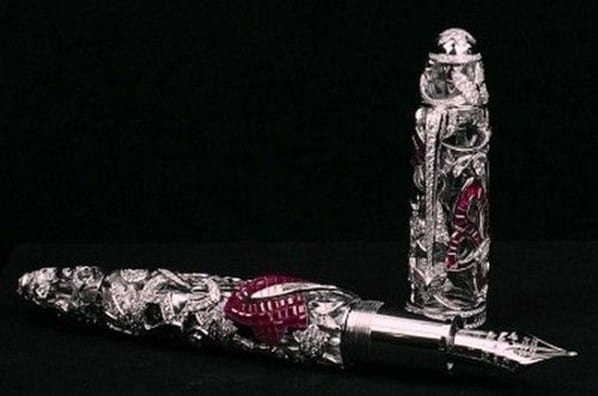 The pen was constructed from white gold, as well as 800 diamonds. The colored ribbon near the end of the body of the pen can be done in rubies, emeralds, or sapphires per the buyer’s preference. The pen’s nib is solid 18-karat gold.

Van Cleef & Arpels have been making jewelry primarily for women since 1906. Their collection, involving both modern luxuries and historic collections, favors chic sculptures and rare stones. 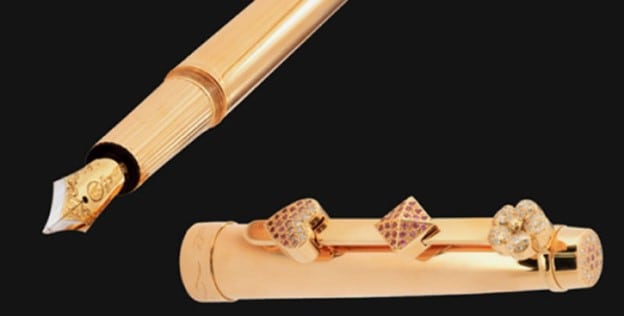 This Heaven Gold Pen, designed by Anita Tan, is one of only 8 issued in the world. Its price tag of nearly $1,000,000 reflects the many diamonds used in its construction – 1,888, to be exact, or about 48 carats worth. 161 of these diamonds are rarer, colored diamonds adorning the crest of the pen.

The gemstone is 43 carats of Tsavorite, a gem in the garnet group known for its radiant green color. It is known for being found in Tanzania, Madagascar, and Kenya. The pen, with its gems and its body of pink gold, earns its spot on this list for being not only one of the most expensive but also the most visually dazzling pens in the world.

Anita Mai Tan is a Canadian jewelry designer who specializes in pens, necklaces, and even cellphone cases. She favors gold and diamonds in her luxury designs, including this pen, which she crafted in 2010. Her interest in Chinese numerology influenced the design. For instance, the number 8, the numerological sign for Fortune, appears in the pen’s construction repeatedly (1,888 diamonds, 48 carats, etc.). 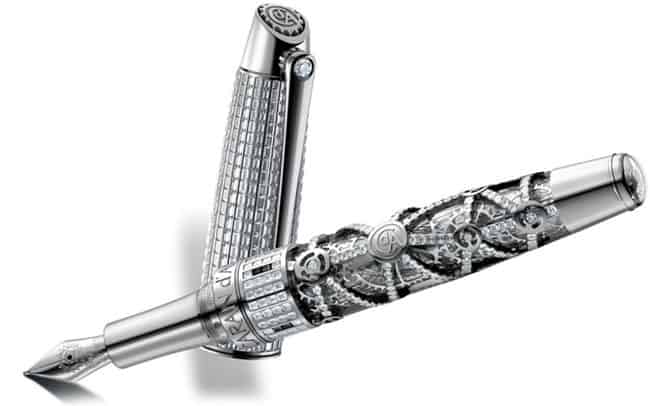 The Swiss heritage of the 1010 Diamond Edition of this Caran d’Ache pen comes through as a hybrid of pen and watch. The 1010 pen contains gears inside its clear casing that mimics the design of a skeleton or naked wristwatch in the oblong pen shape. The hands read 10:10, which researchers have shown (somehow) to be the most attractive clockface, visually. Even the clip has the molding of a clock’s hands with engraved gears.

Caran d’Ache’s 1010 pen collection comes in three variations – diamond, gold, and silver. While gold and silver are certainly valuable pens, only the diamond edition of the pen applies here, with its 800 dazzling stones. 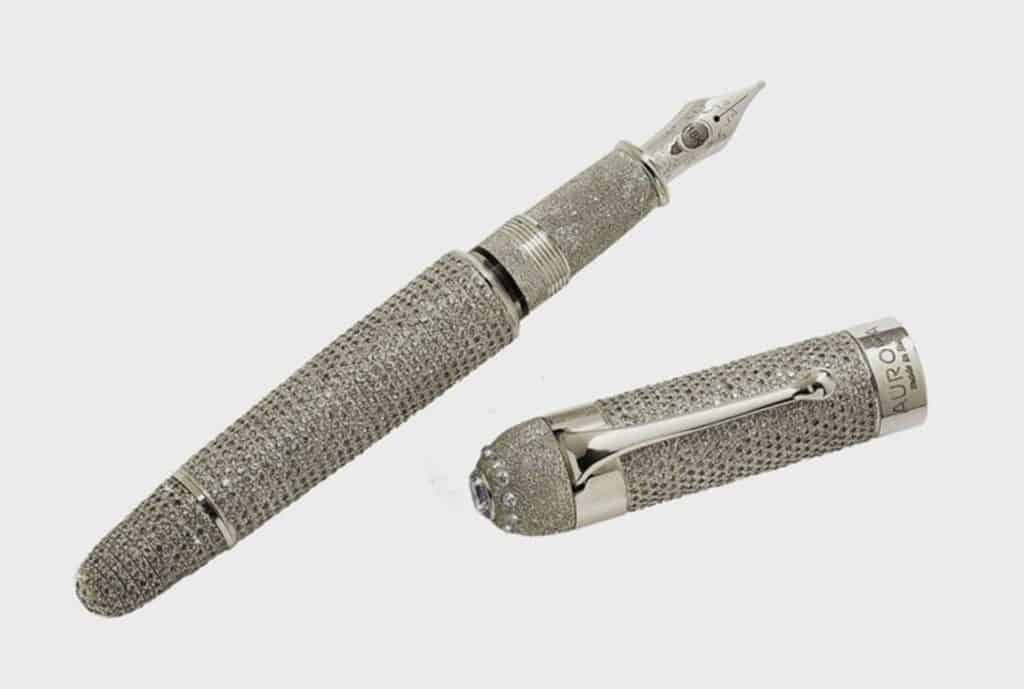 The Diamante pen, crafted by Aurora, is one of the most expensive pens in the world. Aurora is known for watches, leather goods, and luxury pens out of Turin, Italy. They are family-owned and operated by the Veronas and have been an institution in authentic Italian craftsmanship since 1919.

The pen is practically a piece of jewelry, inlaid with 2,000+ diamonds, weighing 30 carats in total. These diamonds have all been sourced by DeBeers Jewelers, crafted for the pen’s pure platinum barrel. The barrel can be customized for the lucky owner with their family’s coat of arms, name, or even their portrait. The nib is made of 18-karat gold.

In the Diamante edition, there’s only one pen, which Aurora makes about once a year. It’s made so meticulously that the body of the pen has exactly 1,919 diamonds on it to celebrate the company’s founding year. 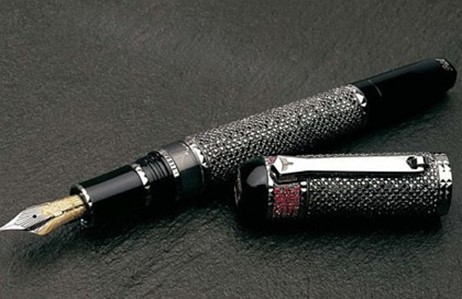 The most expensive pen is the Fulgor Nocturnus. It was created by the pen craftsman, Tibaldi. The pen and cap are inlaid with black diamonds (945 of them). The pen, whose name translates to “Night Glow,” is a work of exceedingly high craftsmanship. It’s so refined, in fact, that the Fulgor Nocturnus’s proportions from cap to pen and in every other fraction imaginable follow the Golden Ratio. This means that it is designed in a proportion that has been scientifically proven to be more pleasing to human eyes.

For that pleasure, the pen costs $8.1 million.

Tibaldi is Italy’s original pen manufacturer. It began making them in 1916. Other pricy Tibaldi pens include a line of limited-edition writing instruments made in honor of the success of the Bentley vehicle line.

Only the most avid and wealthy writing geeks could ever hope to use one of these decadent, jewel-encrusted writing tools.

10 of the Most Expensive Horse Breeds Ever