10 of the Most Expensive Horse Breeds Ever

Horses have played a big part in human history. From the time of their domestication around 3500 B.C., the animals have been used to pull vehicles and support farming. But that isn’t all these animals have done under human guidance. Starting around the year 2000 B.C., horses began joining wars and serving as a form of transportation. These forms of use would continue well into the 20th century and even through today.

Now, horses are often used in various sports and for leisure riding. Although not as common as in the past, horses are still prevalent in society — and their price tags reflect that. From lower cost ponies to very costly sport horses, these are the most expensive horse breeds.

Although the exact origin of Shetland ponies is unclear, experts believe these sturdy horses have been roaming the Shetland Islands of Scotland for over 4,000 years.

Amazingly, despite their undeniably cute features, these ponies are remarkably durable. Developing in a harsh environment, Shetland ponies can thrive on surprisingly little food and enjoy long life spans compared to other breeds.

With a rich history as farm animals, this horse breed now sells for about $500. That’s a lot, but it’s certainly not the most expensive breed on this list.

Several Shetland ponies have been claimed to be the world’s oldest horse. For example, in 2017, a pony named Twiglet died at the age of 50. 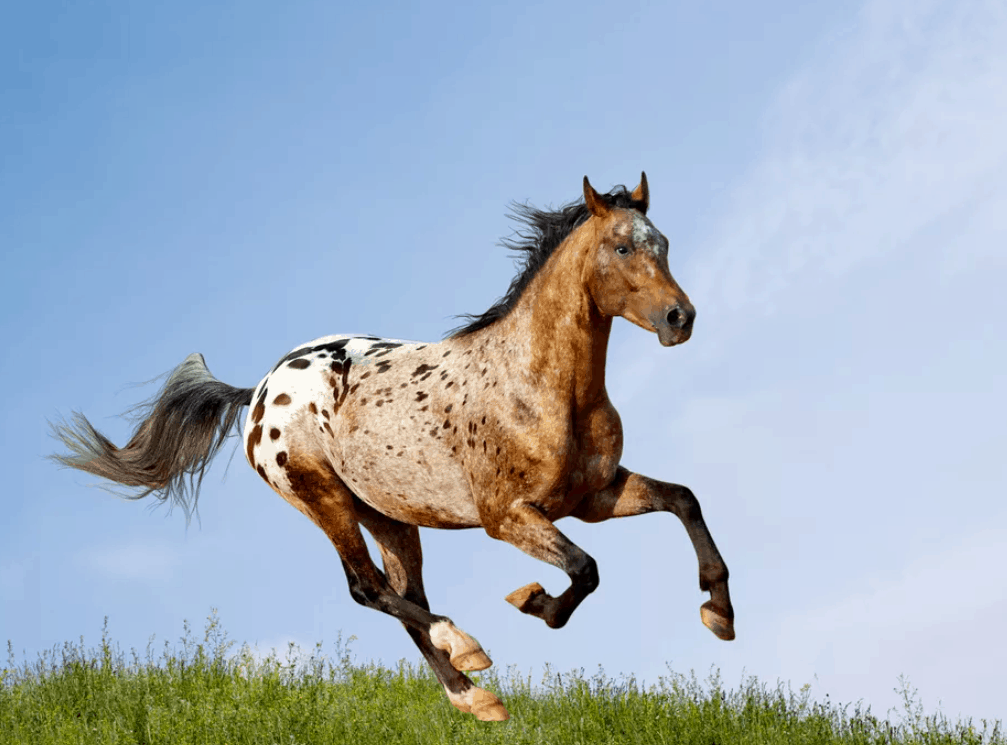 Appaloosa horses are known for being friendly animals that are eager to please. The breed landed in North America in the early 1600s when Spanish explorers arrived on the continent. Since then, Appaloosas have been subject to strict breeding practices that maintain the animals’ colorful features.

With colorful markings, friendly dispositions, and a long history in western regions of the world, an Appaloosa horse will cost buyers about $1,000.

In the 1870s, the population of Appaloosa horses in the U.S. nearly disappeared as the American government attempted to take over Native land — killing and stealing many Appaloosas along the way. 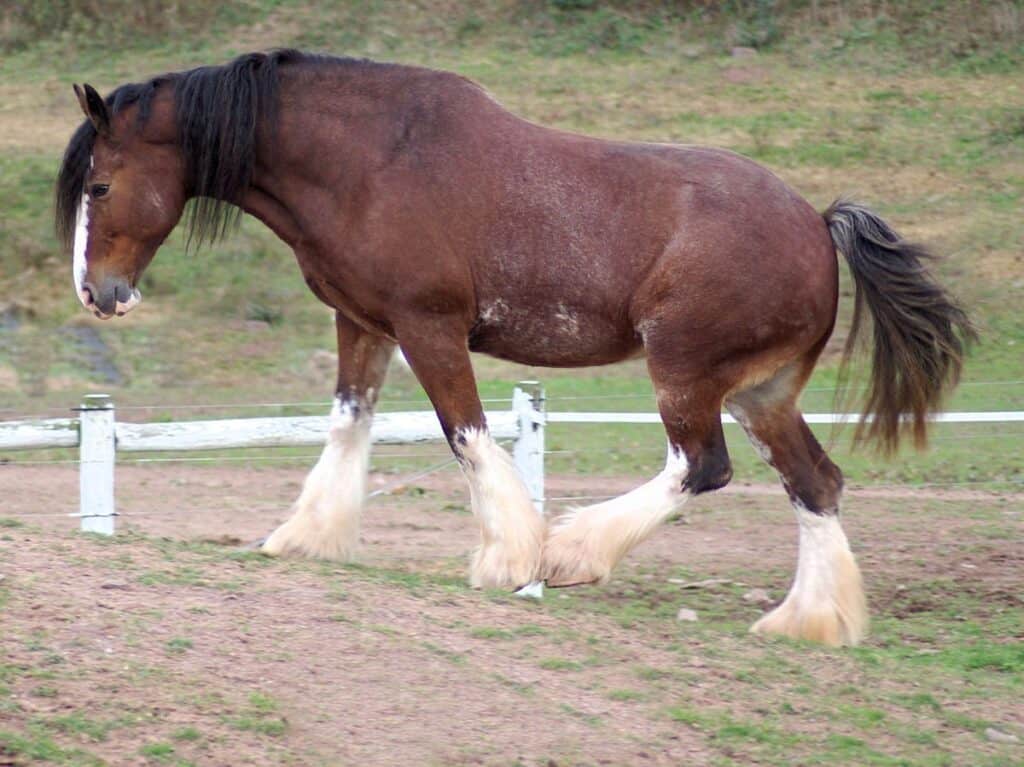 Clydesdale horses are iconic for a lot of reasons, but the biggest one is probably their use by the Budweiser beer company. These large horses are easygoing and gentle, making them popular choices for beer companies and enthusiasts alike.

Developed in Scotland during the early 19th century, this breed gets its name from a river running through the Lanarkshire district — the area where Clydesdale horses originate. By the late 1880s, Clydesdale horses were introduced to the U.S. and became popular on farms and other environments that required the strength of these big animals.

Today, the average Clydesdale sells for an average price of $2,500.

Clydesdale horses are most commonly found in the U.S., where about 600 are added to the official registry each year. 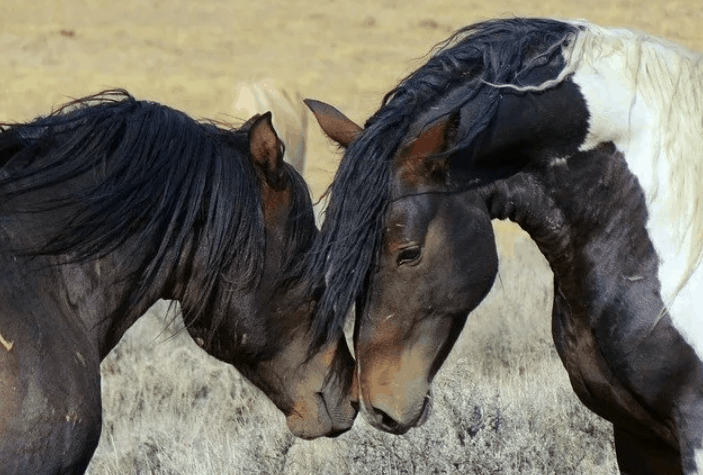 Although Mustangs have a long history beyond the U.S., many of these horses live in the wild along the country’s western regions. At the peak of their American population, it’s estimated that as many as two million mustangs lived in the wild. Today, that number has dropped to just 30,000.

Now, this breed is popular for trail riding and ranch work. Thanks to their wild heritage, mustangs are very sturdy and sure-footed — and those characteristics have contributed to the breeds’ steep price tag of about $5,000.

Mustangs are known for their strong, healthy hooves. Experts say this feature developed during the species’ time in the wild. 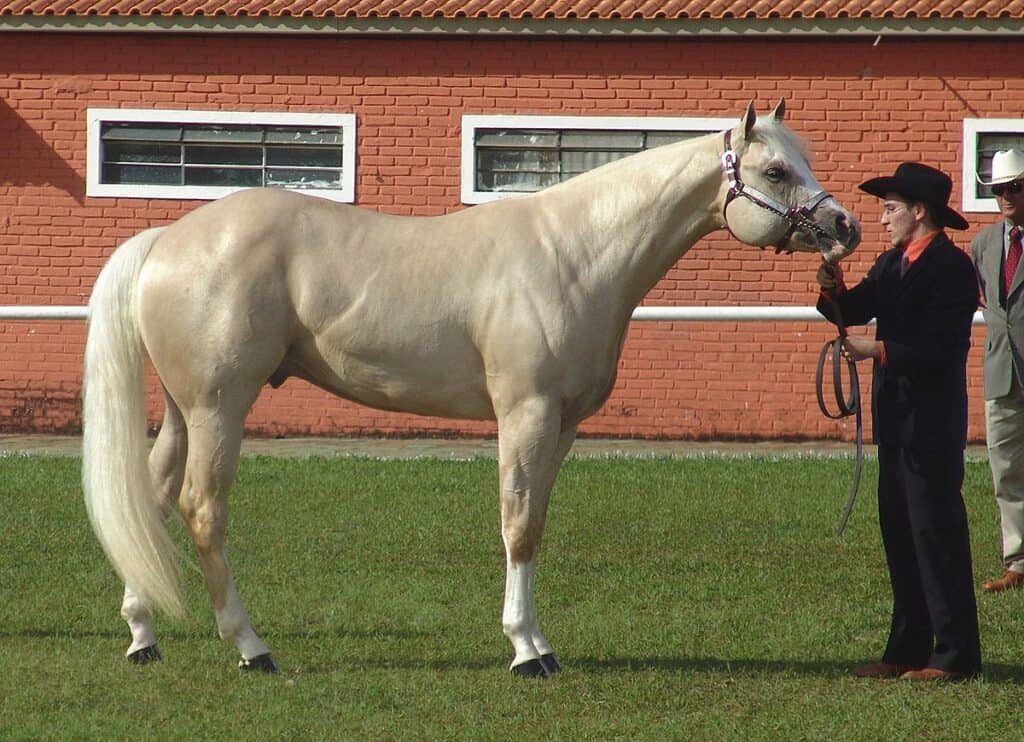 At $10,000, the American Quarter horse is a very expensive breed — but still not the most expensive one out there.

Like many horses on this list, American Quarter horses got their start in the U.S. several hundred years ago. In fact, dating back to the 1600s, Quarter horses landed on American shores before the United States even existed.

Popular among travelers, this breed’s sure-footed stride and strong legs make it a trusted horse for trail riding and difficult terrain.

This breed of horse got its name by dominating quarter-mile races during the early years of American colonization. 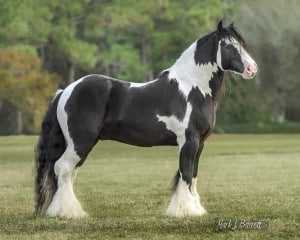 Standing around 50 inches tall, Gypsy Vanners are on the smaller side for horses — but that doesn’t make them any less sturdy. With wide builds and durable legs, Gypsy Vanners are perfectly capable of sustaining an active lifestyle.

This horse has roots in Romani caravans that traveled through Great Britain. Eventually, the breed was brought to the U.S. in 1996, where it remains popular for its stamina. At $12,000, the cost of these horses earns its spot as the 5th most expensive entry on this list.

In the same year this breed was introduced to the U.S., the Gypsy Vanner Horse Society was established. Today, the Society works to “respect the spoken words” of the Romani people who worked to develop the breed. 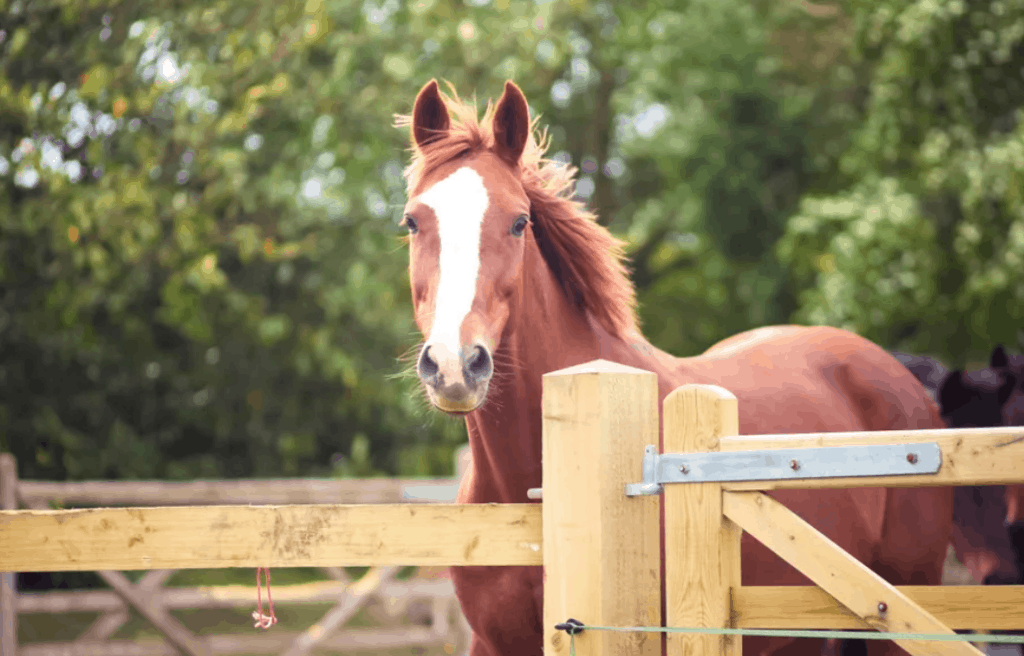 Often found in solid colors like gray, black, and brown, these big horses occasionally have white markings and are often considered very intelligent.

Today, Dutch Warmbloods are quite expensive, with prices easily hitting $25,000 or more. 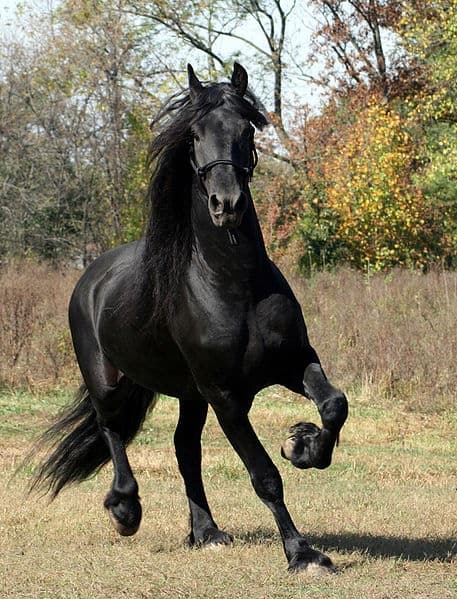 Starting as workhorses, Friesians have since become popular sports animals — joining a variety of competitive activities that contribute to the breeds’ average price of over $47,000. This steep cost is backed up by institutions like the Friesian Sporthorse Association, an organization that sets guidelines for things like standard colors of the breed.

With a great deal of strength and a generally gentle demeanor, this breed can be seen pulling carriages at themed events.

There are two subsets of Friesian horses: Sport and Baroque. While Sport Friesians focus on competitive games, Baroques more closely resemble the breed’s original form and are often used for leisure riding. 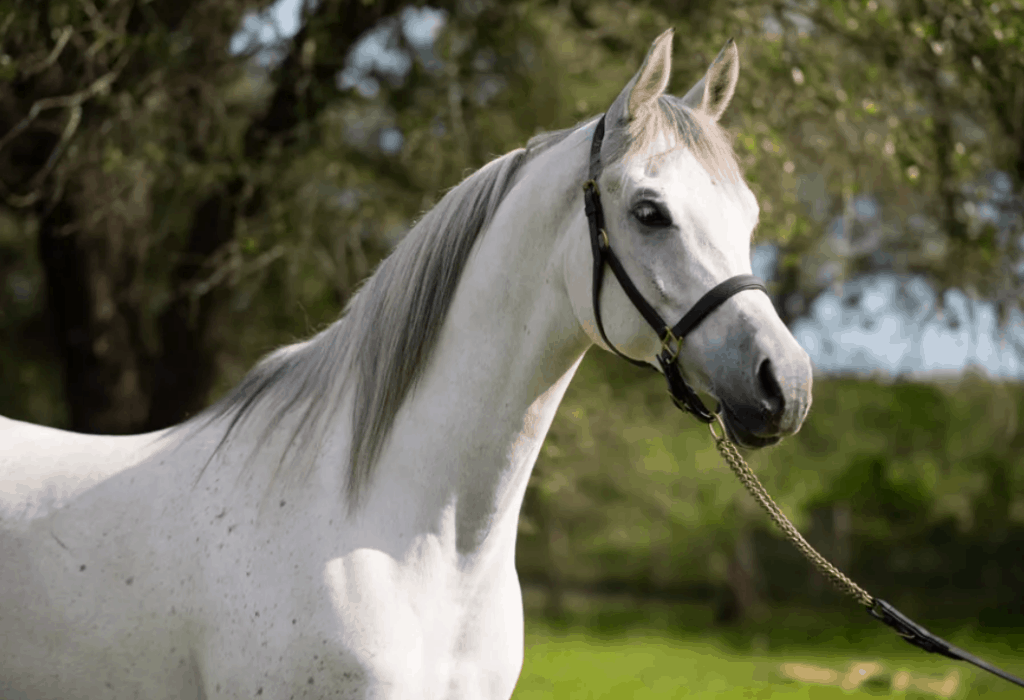 Although their exact history is unclear, Arabian horses have roots in the sandy Arabian Peninsula. There, tribes used this breed way back in the year 3000 B.C.

Today, Arabian horses are known for their hardiness and athleticism. These characteristics have made Arabian horses the breed of choice for endurance competitions like long-distance races.

Because of their athletic ability, Arabian horses have earned a prestigious place in the equestrian world — landing them price tags that regularly surpass $80,000.

Arabian horses were popular among important historical figures. In fact, Napoleon Bonaparte, George Washington, and Genghis Khan were all known to own and ride this breed. 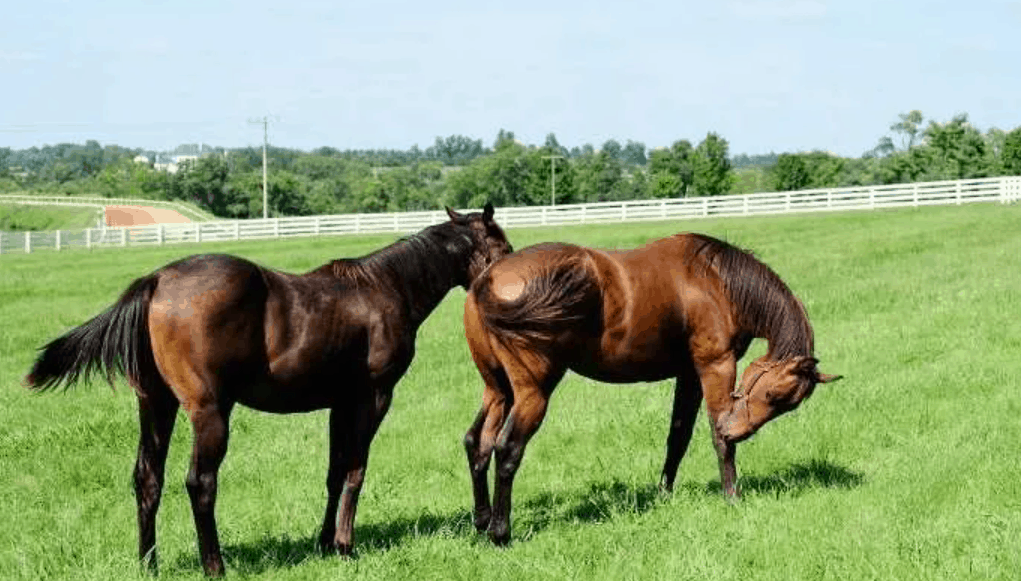 Thoroughbreds are the most expensive horse breed. With origins in 17th-century Great Britain, these wildly expensive animals got their start as racehorses after a period of selective breeding that led to incredible strength and stamina.

Today, Thoroughbreds are popular among high-level racers — but the breed is still seen in other sports like jumping and dressage. With a rich history of strength and winning characteristics, these horses easily sell for $300,000.

The Thoroughbred bloodline can be traced to three horses named Byerly Turk, the Darley Arabian, and the Godolphin Arabian. These horses arrived in England around the late 1600s and became foundational stallions to modern-day Thoroughbreds.

8 Most Expensive Chocolates in the World