Motorcycle collecting has been around practically since the introduction of motorcycles, which was with the Daimler Reitwagen in Germany in 1885. These original models have given way to a huge industry, the top producers of which are currently Honda, Yamaha, and Hero MotoCorp out of India. Higher motorcycle production in eastern countries is not accidental. In countries that are still developing, where parts and fuel are scarcer, motorcycles are viewed as affordable and practical alternatives to automobiles, not just objects for show.

Riders all over the world will be familiar with the bikes listed here, which are legendary collector’s items as well as peak performers in their engine classes. Keep reading to learn about the 8 most expensive motorcycles in the world. 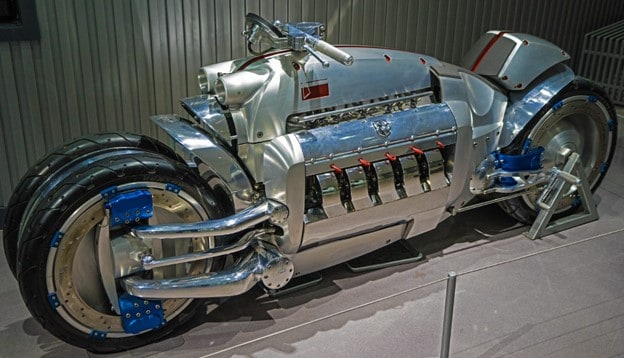 The motorcycle casts a powerful vintage sci-fi profile – it’s like the entire Iron Giant compressed into a ridable form. The fact that it costs $550,000 for all 680 kg of this heavy metal monster should come as no surprise to anyone who sees it.

The Dodge Tomahawk Superbike is equipped with a 10-cylinder car engine that would normally be fitted to a sports car like a Dodge Viper. Both its front and rear wheels are independently sprung, which allows the Tomahawk to lean into corners like no one’s business. 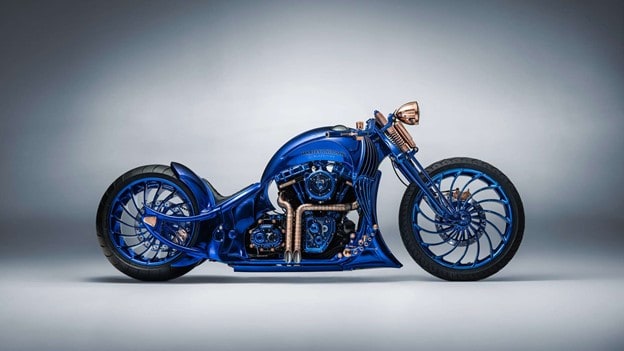 The Harley-Davidson Bucherer Blue Edition was rebuilt from another Harley, the Softail Slim bike. It was built as a collaboration between Harley-Davidson and Bucherer, the Swiss jewelry manufacturer. Bucherer has been around for over 130 years.

The bike is fashioned with diamonds, gold-plated screws, and even a safe. In the safe, the folks at Carl F. Bucherer included a custom watch and Bucherer rings. It’s no wonder the bike costs $1,900,000.

The Harley-Davidson Bucherer Blue Edition is a custom bike that takes 2,500 hours to build. Each of the bike’s metal parts is welded, ground, and polished by hand. The bike contains heat-proof LED lamps that make the bike’s insides visible from the outside, including throttle valves plated with gold. 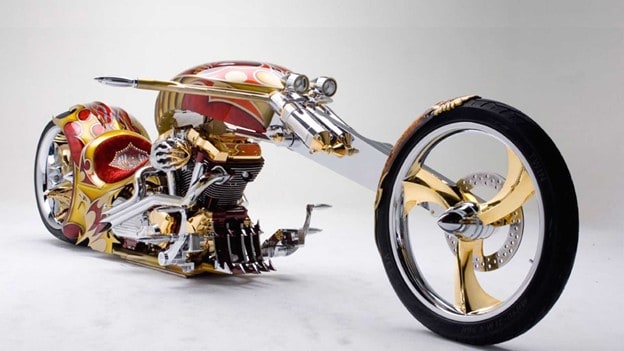 The Yamaha BMS Chopper is a roadster that packs a V-twin, 1700cc engine. It costs $3,000,000 not only because of its incredibly unique design, ornamented with jeweled flames jutting back from the front wheel, but because of its material construction. This bike is coated completely in 24-karat gold. The upholstery is all genuine red velvet.

Yamaha is of course known as one of the leading motorcycle manufacturers in the world, for one of the world’s biggest machine export markets in Japan. This chopper was built for luxury but built with credibility, which is one of the reasons it costs millions. It is also known as the “Nehmesis.”

BMS Choppers makes custom motorcycles, including this Yamaha and the previous entry on our list, the Nehmesis. Run by Sam Nehme, BMS bikes can be seen in showrooms under some of the most luxurious company labels in the world.

The Hildebrand & Wolfmüller brand out of Germany is the first to ever design combustion engine motorbikes. This motorcycle would have only cost a few dollars in 1897 but now sells for $3.5 million owing to its historical importance and its now-vintage design.

The coolest thing about turn-of-the-century machine concepts is that they were so awesome then that they still look awesome now. The hard lines and angles of this motorcycle command attention when avid viewers catch a glimpse of them in a museum. It’s no wonder that it costs so much to actually own this piece of history.

The brothers Heinrich and Wilhelm Hildebrand worked as steam-engine engineers before partnering with Alois Wolfmüller to create the internal combustion engine for their bike, called the “mottorad.” It was completed in 1894 in Munich. The bike was finished three years later. 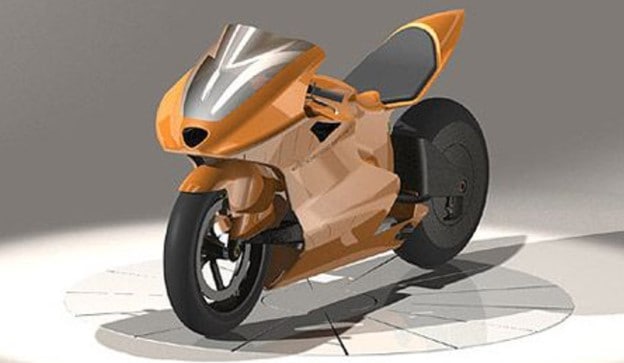 The Ecosse ES1 Spirit is a bike made in a collaboration between Don Atchison, Richard Glover, and Andy Le Fleming. Both Glover and Le Fleming engineered for Formula 1 racing cars before Ecosse Moto Works, equipping them to make a fast, light, luxury bike when they teamed up to tackle the aerodynamic design of the Ecosse Spirit.

This 265-pound bike can reach up to 230 mph, making it like the compressed version of an F1 car, priced at a stout $3,600,000. Anime enthusiasts may recognize heavy inspiration taken from Kaneda’s motorcycle from the hit 1988 cyberpunk film, Akira.

This bike was designed to be aerodynamic and compact. Where the headstock would be on a normal bike, the Ecosse ES1 has its air-box. The fuel tank actually sits low, under the rider, whose legs can hug the frame of the bike tightly, preventing the rider from increasing the wind resistance of the bike. 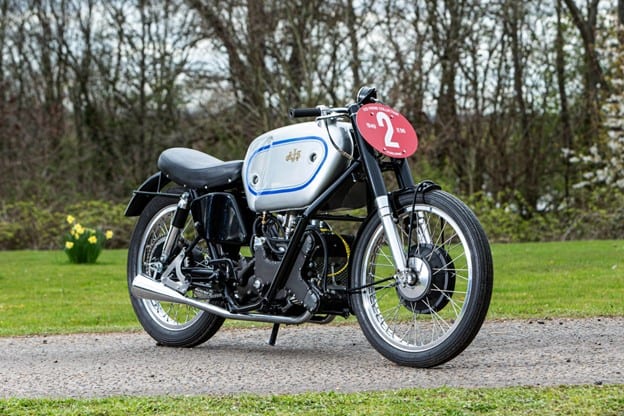 The E90 AJS Porcupine was built by a British company famed for their racing bikes, called Associated Motor Cycles (AMC). This bike was built in 1945, making it one of the oldest on this list. It’s priced at $7,000,000 not only for its design but for its vintage appeal.

This old motorcycle has a horizontal engine and was first raced by Jock West at the Isle of Man TT 1947, where it came in 15th due to teething issues. Despite the low ending position, West raced the third fastest lap that day. Later in 1949, the first FIM 500cc World Championship saw this bike again (ridden this time by Leslie Graham), where it took first place.

The E90 AJS Porcupine was designed to be supercharged like many of the pre-war racing bikes. However, the FICM (Federation Internationale de Motocyclisme) banned supercharging after the war, so the Porcupine had to be reworked for new regulations. Many blame these changes on the bike’s inconsistent performance.

We mentioned that motorcycling is popular in India. This is never more apparent than with the streetfighter motorcycle, the Limited Edition Fighter by Nieman Marcus. This silver bike is powered by a V-Twin engine, air-cooled and capable of 300 km/h. This makes it not only one of the most expensive bikes in the world but also one of the fastest.

The distinctive, futuristic style of this single-rider, carbon fibre frame motorcycle makes it not only a gorgeous display piece but an $11,000,000 acquisition.

Neiman Marcus is a chain of high-end luxury department stores that includes the Bergdorf Goodman stores. Their foray into motorcycles follows suit from other industries they’ve approached with their signature style, which includes the Arch Motorcycle line, created by none other than Keanu Reeves and Gard Hollinger. 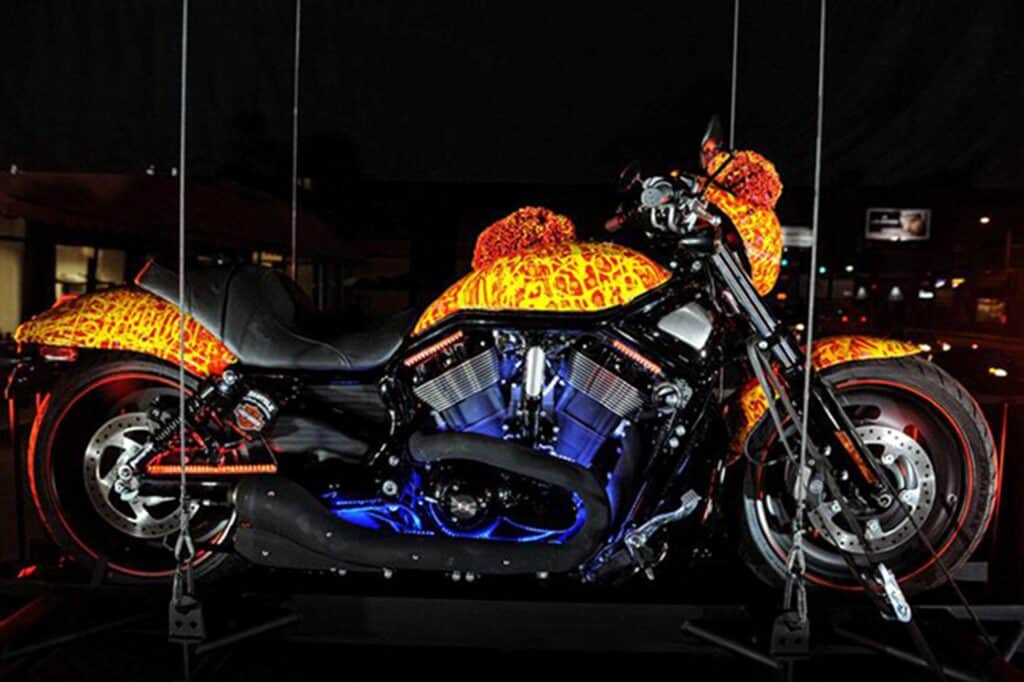 The most expensive motorcycle is the Cosmic Starship Harley – Custom Painted. The original Cosmic Starship motorcycle costs $1.5 million out of the factory, so it’s already a pricey bike. Adding in a custom paint job by artist Jack Armstrong causes the price to rocket to $35,000,000.

After buying the original bike in 2009, Armstrong customized this Harley for three years until selling it in 2012 to a collector. The bike was locked in a climate-controlled vault during the interim. Many publications and collectors have requested to see this amazing bike, but few have ever been in its presence.

Jack Armstrong is a pioneer in the modern art style known as “Cosmic Existentialism,” also known as “Cosmic ‘X.’” He used one of the world’s most famous gemstones, Queensland’s Black Star Sapphire, to inspire the design of the updated bike.

In the past, he has collaborated with artists such as Jean-Michel Basquiat and Andy Warhol. In addition to the world’s most valuable motorcycle, Armstrong can also be credited with designing the world’s most expensive bicycle and cowboy boots.

The world’s most expensive motorcycles could be valued highly for function, luxury materials, speed, or even heritage. Custom models can get up to tens of millions of dollars in value with the most powerful engines available, especially for anything smaller than a sports car.

Whether to win style points on the open road or furnish your garage/showroom with one of the greatest bikes in the world, any of these 8 expensive motorcycles will more than fit the bill.