Montblanc traces its roots to the early 1900s. In those years, a designer named August Eberstein partnered with a banker named Alfred Nehemias to make a high-quality fountain pen. By 1910, the Montblanc brand was officially established and its famous “white star” symbol was born.

Montblanc quickly proved to be a successful company. In the ‘20s, the company launched the Meisterstück, Montblanc’s most successful pen.

The success of Meisterstück was slowed by WWII, but Montblanc moved production from Germany to Denmark as Europe recovered from the war.

Today, Montblanc is one of the biggest names in luxury pens. The brand makes a huge variety of pricey designs, including many that include rare metals and real diamonds.

Learn more about Montblanc’s most expensive pens with this list! 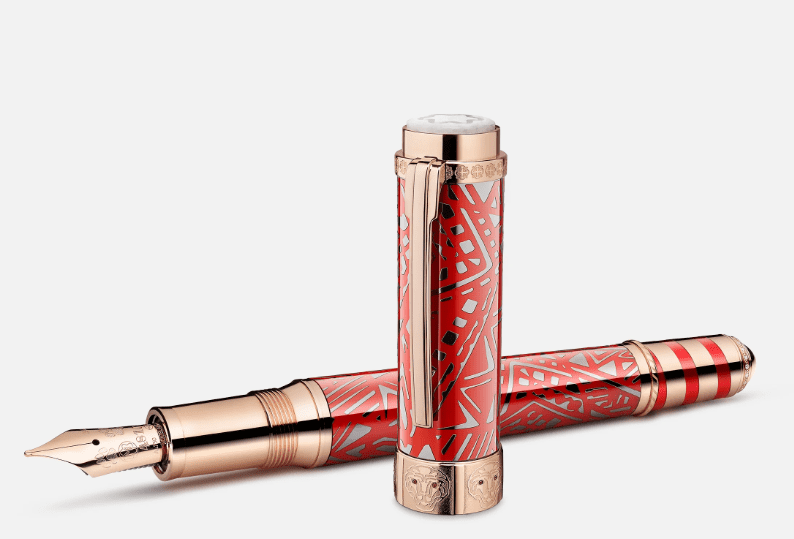 Kicking off our list is this eye-catching, limited-edition pen inspired by the Art Deco style. According to Montblanc, the pen takes notes from “The Peggy Guggenheim Collection…especially from the Art Deco movement.”

The brand says the design features rose gold and a variety of other luxury materials. All of it was put together by hand and the final product measures just under 6 inches long.

Overall, this beautiful pen costs a whopping $10,300. Would you buy it?

Montblanc says certain parts of this pen reference Art Deco. Specifically, “The straight shape of the cap, barrel and clip is connected to the Art Deco period.” 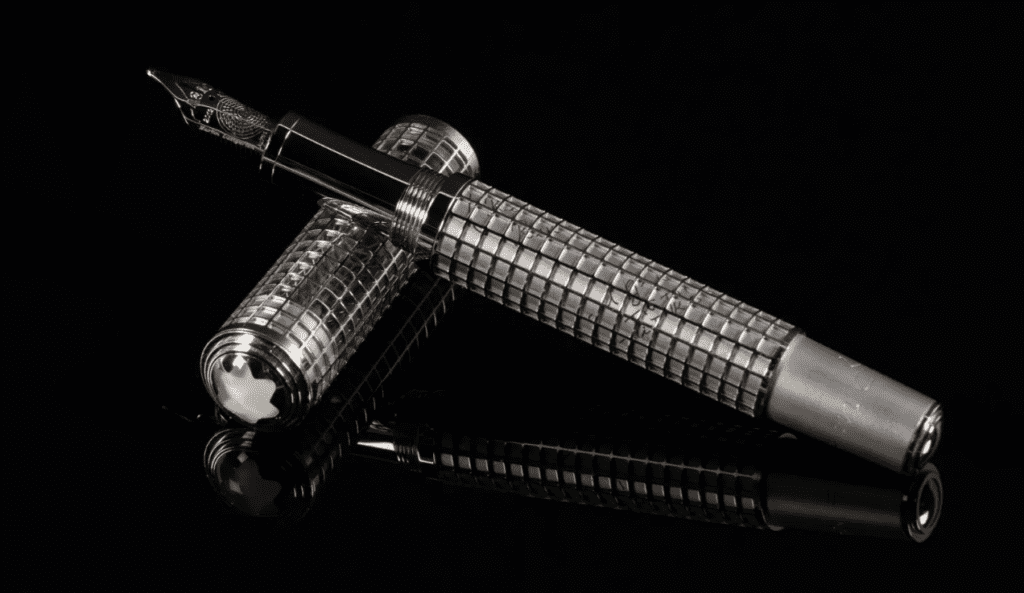 Coming in at number nine is this beautiful pen inspired by Einstein’s theories. The pen features 18K white gold and other luxury materials, with a grid-like body referencing “the space-time continuum.”

Live Auctioneers sold this pen in March 2022 for a whopping $20,000. According to the auction house, the pen was in “very fine” condition at the time of the sale — but it had been used a few times.

According to Live Auctioneers, this pen was sold alongside a beautiful lacquered wood display box.

8. The Diamond and Sapphire-Inset Pen 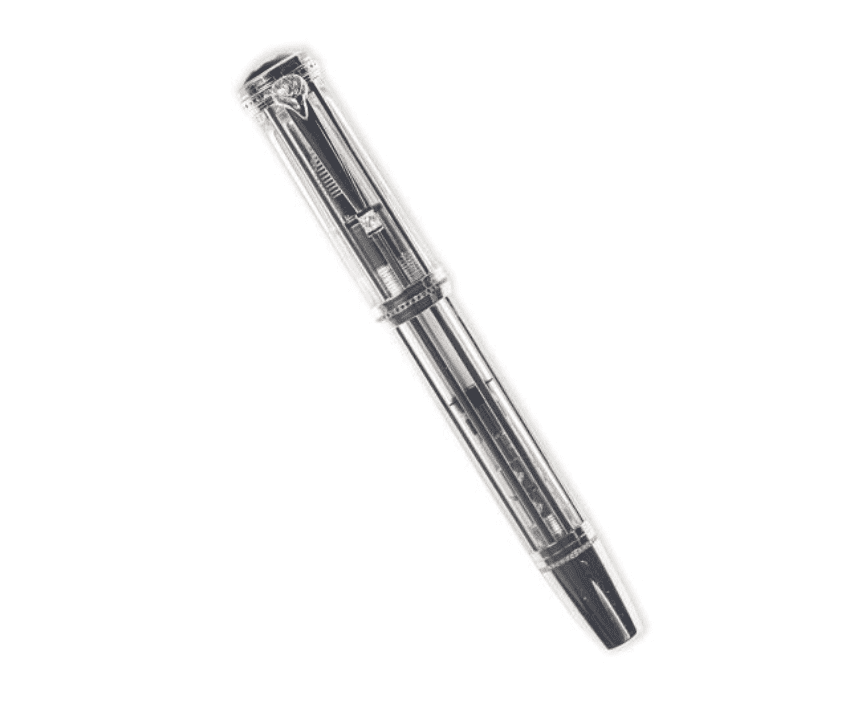 Coming in at number eight is this eye-catching 18K gold pen. The luxury design is built on a clear resin body, with shimmering sapphires and glowing diamonds catching the light.

Christie’s auction house sold this pen in 2008 for over $20,000. According to the auction house, the pen was in overall good condition at the time of the sale. “[The pen is] apparently unused,” said Christie’s. The pen was sold alongside its original fitted case.

Christie’s auction house expected this Montblanc pen to sell for 5 grand max. The final hammer came down north of $20,000, shocking everyone in the audience. 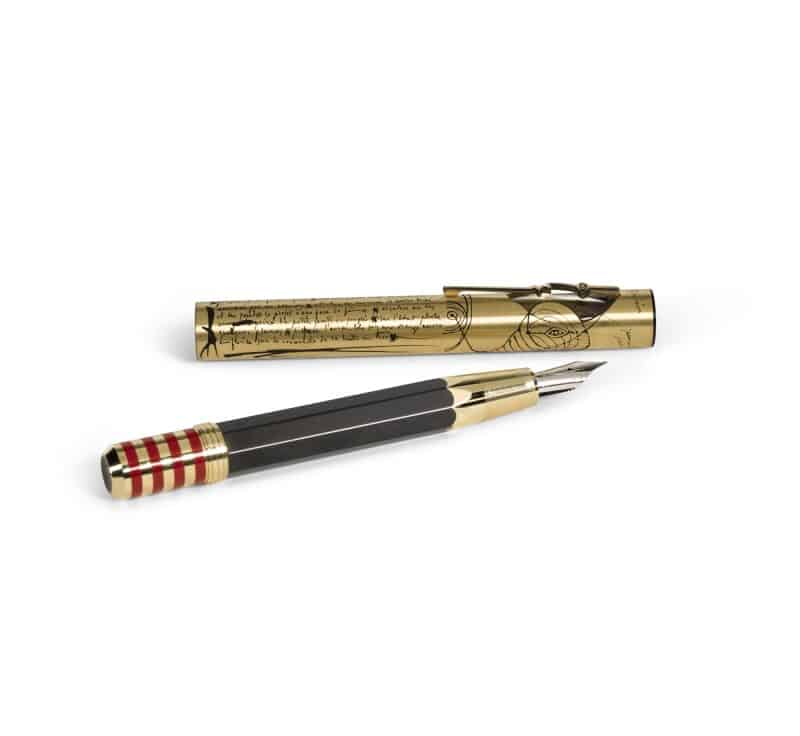 Montblanc made this eye-catching pen to celebrate the iconic artist Pablo Picasso, the creator of world-famous pieces like Guernica, The Weeping Woman, and The Old Guitarist. Montblanc paid tribute to Picasso’s artwork with depictions of his sketches, notes, and more. Most notably, the pen’s tip is engraved with Picasso’s Ojo (AKA his eye drawing).

Sotheby’s auction house sold this artistic pen for about $26,000, making this the seventh most expensive Montblanc pen in the world.

Sotheby’s sold this pen alongside its original display box. The box was made of red lacquered wood, and Sotheby’s said it came with its original packaging. 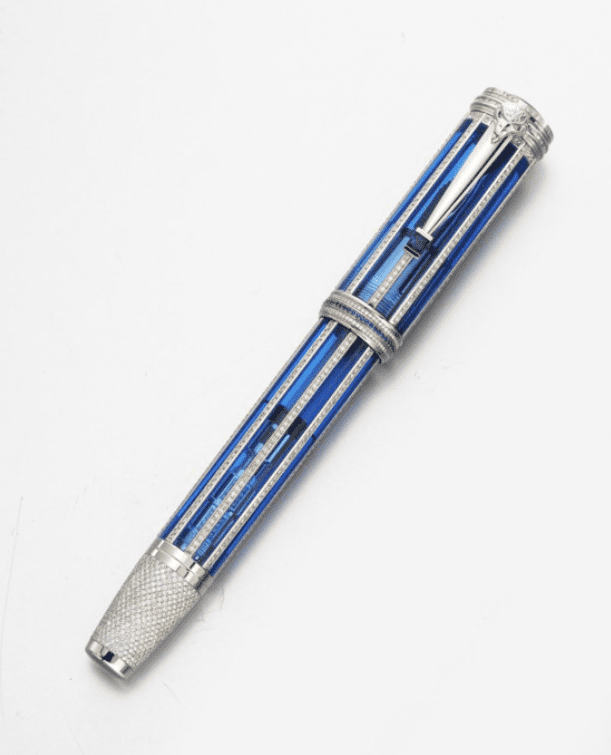 This beautiful gold-and-diamond luxury pen features a shimmering cap with beautiful sapphire details. The design as a whole was inspired by the architecture of the White House, with blue resin and eye-catching diamonds shimmering under any light.

The pen was sold by Christie’s auction house in October 2008 for over $26,000, making it the sixth most expensive Montblanc pen ever.

Christie’s auction house sold this pen as part of a four-pen collection in the fall of 2008. The collection included a selection of Montblanc’s most exclusive limited-edition designs, offering “Elegant sophistication and unmatched performance” to the discerning collector. 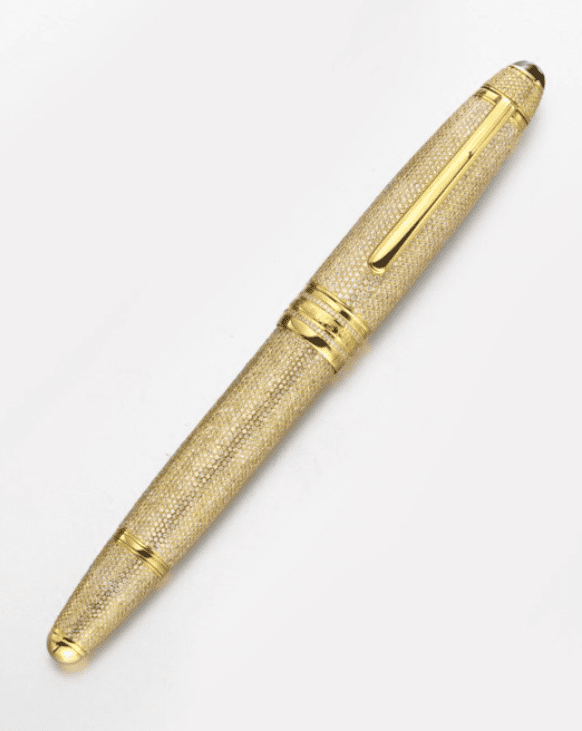 According to Christie’s auction house, the design is a “dazzling…[example]…of Montblanc’s trademark craftsmanship and striking style.” Just look at all those diamonds!

In the fall of 2008, this glittering pen sold for a jaw-dropping $32,500. Christie’s auction house expected the pen to sell for at least 30 grand, but it could have gone for as much as 50 grand.

Christie’s sold this pen alongside a signature Montblanc fitted case. 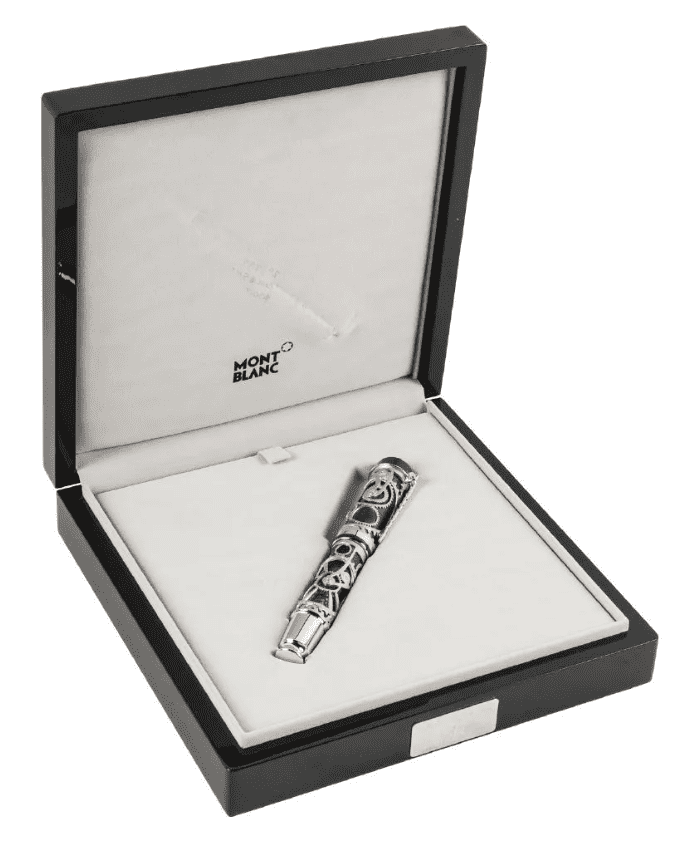 Montblanc made this pen to commemorate Charlie Chaplin, the iconic comic actor of the early 20th century. The pen includes references to Chaplin’s iconography, including a reference to his famous movie “Modern Times.”

Reportedly, Montblanc underestimated how much it would cost to make this beautiful pen. The company didn’t change its price though. All of them were sold at a significant loss, and Montblanc didn’t attempt the design again.

This pen was made in 2007 in Germany. Experts call the creation “the highest evolution of Montblanc’s design ethic.” 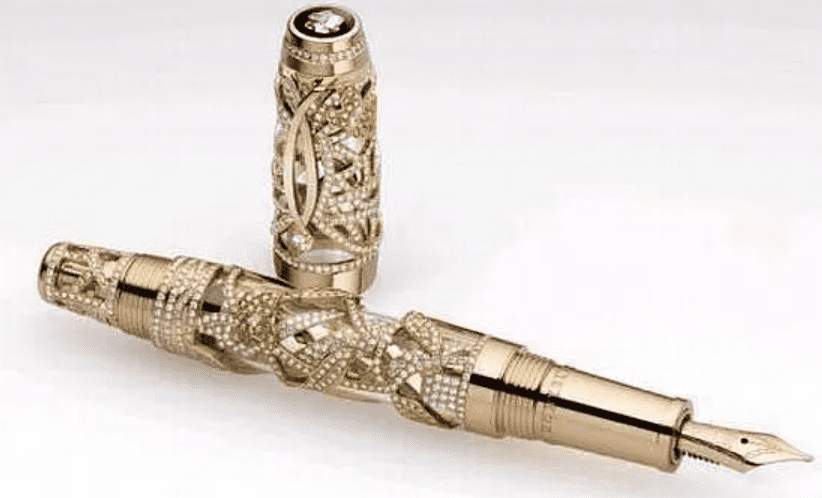 Around 2008, Montblanc made a limited series of gold, diamond, and sapphire pens called “The Limited Edition Boheme Papillon.” Just six units were made, and each featured a stunning array of more than 1,000 diamonds.

Montblanc’s white star logo was made to resemble the snow-capped peak of Mont Blanc itself, the highest point of the Alps mountain range in Europe.

Pen Price: $300,000
Materials: Gold, rubies, and diamonds
Feature: Transparent design
Pen Fact: This pen was made after the death of Prince Rainier III 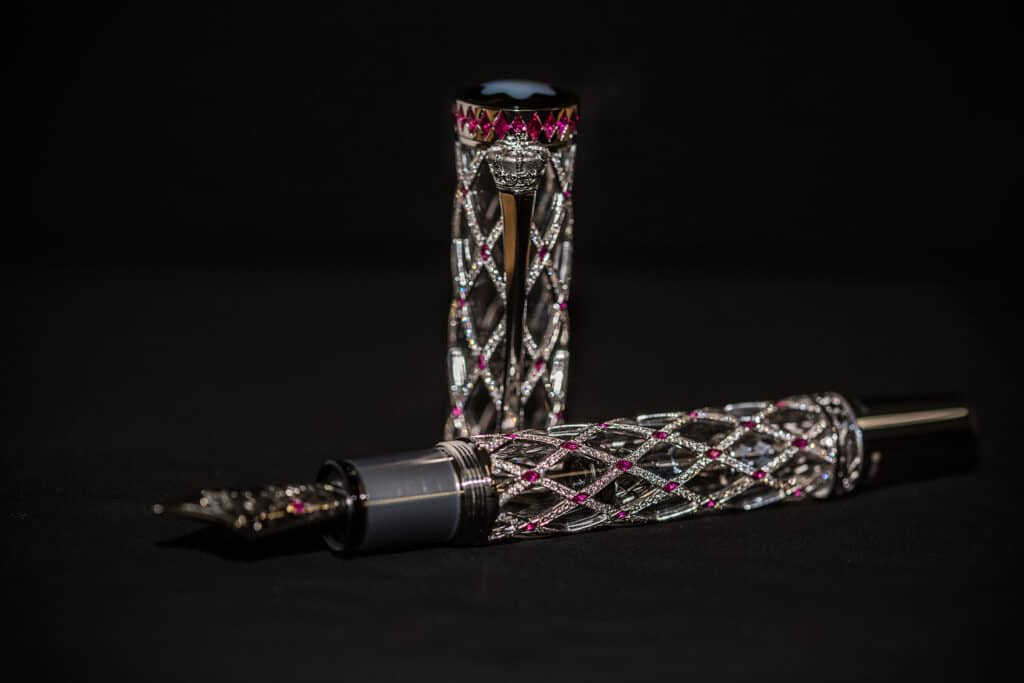 Coming in at number two is this sparkling pen made following the death of Prince Rainier III, ruler of Monaco from 1949 to 2005. The stunning writing utensil shines with nearly 1,000 diamonds and rubies alongside 18K gold details.

The whole design is based on a transparent pen body, letting lucky users see inside the impressive instrument.

Overall, Montblanc made just 81 Prince Rainier’s, so they were destined to be expensive. The rare and collectible pen is worth about $300,000.

Monaco is a small country of fewer than 500 acres near France and Italy. The microstate has a population of only about 40,000 people, making it one of the smallest countries in the world.

Pen Price: $730,000
Materials: Diamonds, gemstones, and other rare materials
Feature: This pen includes 840 diamonds
Pen Fact: This pen was made in France and Germany 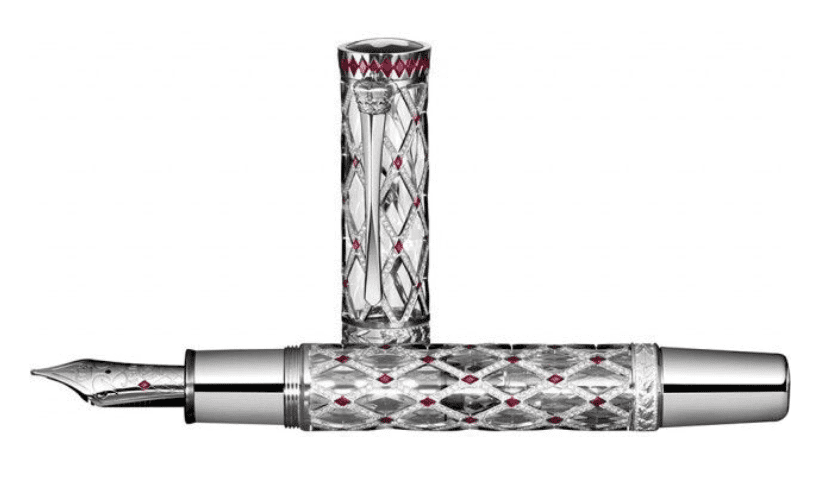 The Limited Edition Mystery Masterpiece is the most expensive Montblanc pen.

Montblanc is known for making crazy-expensive pens, but $730,000? Really?! Yep. This pen costs more than most houses. The Limited Edition Mystery Masterpiece family has three variations: sapphire, ruby, and emerald.

Each showcases a different gem, but they all share a few specific features, including diamonds (over 800 on each pen, to be precise).

Montblanc made three of each Mystery Masterpiece version, equalling nine pens altogether. Would you write with one?

Each Mystery Masterpiece pen took a team of designers over a year to produce.

10 Most Expensive Paintball Guns Currently on the Market