The story of Mercedes begins in the 1880s when two businessmen operated two different companies: Benz & Cie and Daimler-Motoren-Gesellschaft (DMG).

While these businesses were in competition, both were working in the automotive industry.

Eventually, WWI made car manufacturing difficult, so the two companies joined forces to avoid going under.

This partnership was the beginning of the Mercedes-Benz brand — which officially started in 1926.

Today, the Mercedes name is attached to a lot of luxury vehicles. While most of these vehicles are pretty expensive, some push the limits of luxury and secure multi-million dollar price tags. 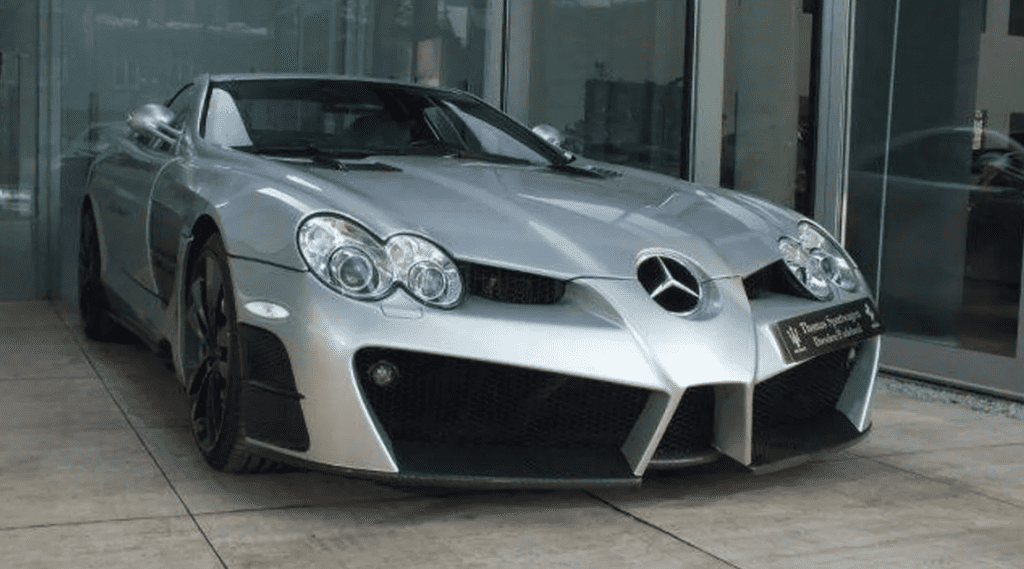 This rare Mansory SLR Renovatio was put up for sale by a Maserati and Ferrari dealership in Germany. The car was used, but that didn’t stop it from being expensive. Clocking in with just over 15,000 miles, the vehicle sold for a staggering $300,500.

So just how rare is this car? Mercedes stopped making the SLR line, which is already enough to make it a collector’s item — but this particular car is even more unique since it was modified to weigh less. As a result, the tuned vehicle accelerates faster than the standard model.

The SLR line was originally called the W196S, but the Mercedes marketing department quickly recommended a name change. The new title stands for “Sport, Light, Racing.”

In 2013, reports emerged of a sleek Mercedes concept car that took design elements from the 1952 300 SL race car. At the time, it wasn’t clear if Mercedes would actually produce the vehicle — but that quickly changed when it was announced that the AMG Vision Gran Turismo would indeed be made.

However, Mercedes had one big caveat to the exciting announcement: Only five models would be produced. As a result, the AMG Vision Gran Turismo was instantly a collector’s item. With such a limited number available, the rare car went for an incredible $1.5 million.

While some details about the very rare car are hard to track down (like its max speed), experts say the vehicle probably included a 6.3-liter V-8 — so it’s safe to assume the car was pretty powerful.

Interestingly, Mercedes limited the purchase of these five vehicles to the Middle East, Europe, and the U.S. 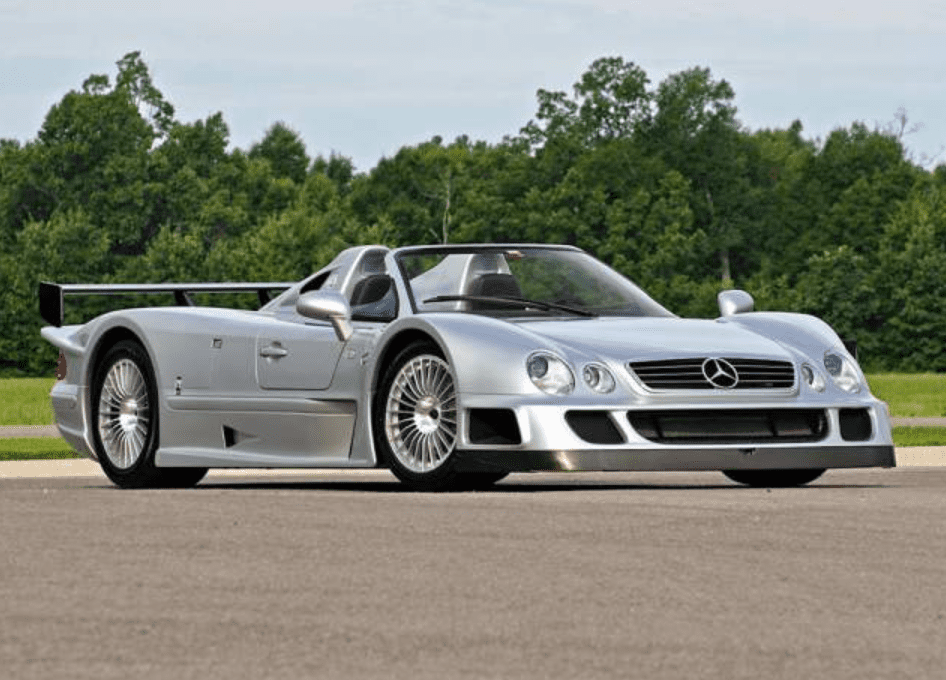 This Mercedes CLK GTR Roadster is one of the rarest cars ever. How rare? Just six of its kind were made.

So what did this used car offer? Incredibly, the vehicle featured only 70 miles on the clock and a staggeringly powerful 6.9-liter V12 engine. All that power means the Roadster can sprint from 0 to 60 in just 3.8 seconds, not bad for a used car.

This car was listed for sale in 2014, but the original model came out in 2002. Before the 2014 listing, another used edition of the rare vehicle sold for $1.3 million. 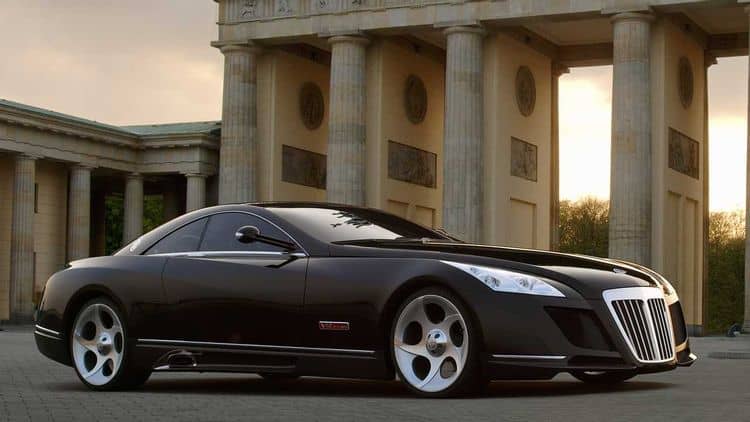 Jay-Z has a lot of money. Like — a lot. In March 2021, the rapper announced his net worth had passed $1 billion thanks to big earnings from his champagne and music streaming companies.

With all that money, it’s not surprising that the artist has owned and sold some very expensive cars. Notably, Jay-Z offered up his Maybach Exelero in 2020 for the steep price of $8,000,000.

As you might expect, the Maybach Exelero isn’t Jay-Z’s only expensive car. According to one report, the rapper and his wife Beyonce share a collection of over 15 luxury vehicles.

Jay-Z didn’t just buy his Maybach Exelero to drive around. The car was actually a prop in his music video for the song Lost One. 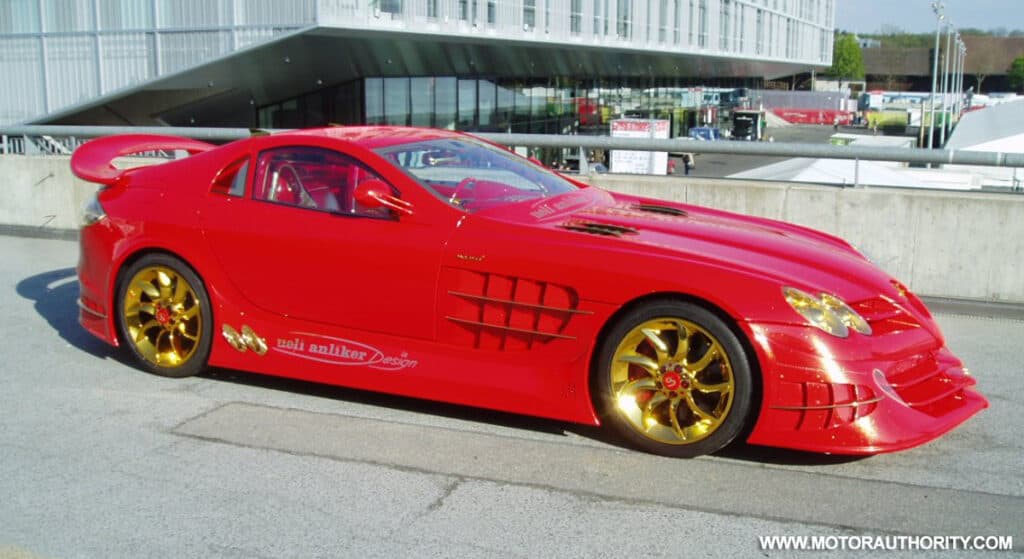 Red Gold Dream Mercedes-McLaren SLR is the most expensive Mercedes.

With a price tag of $11,000,000, this unique car is definitely the most expensive Mercedes out there. The one-of-a-kind design was created by Swiss designer Ueli Anliker and features shimmering red paint that was mixed with 11 pounds of gold dust.

And the excess doesn’t stop there.

The car’s tires were plated in 24 karat gold before ruby-encrusted lug nuts secured them in place. Next, the car’s indicators were adorned with jewels while ruby and gold details in the driver’s seat and headlights complete the absurdly expensive design.

This car was already expensive before Ueli Anliker added his costly flourishes. Although the exact original price is unknown, other Mercedes-McLarens easily cost more than $250,000.

The Most Expensive Mercedes You Can Buy

Those are the most expensive Mercedes ever, what about the ones you could actually buy? 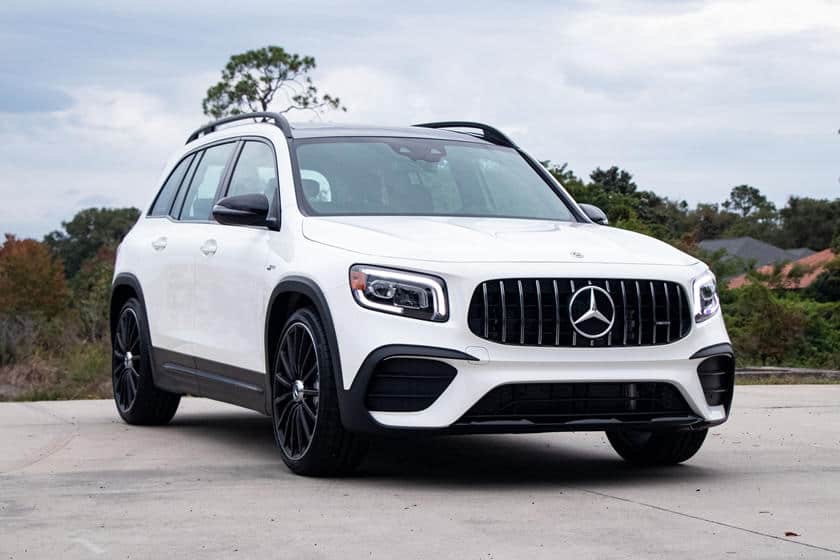 With a base price of nearly $50,000, this expensive Mercedes features lots of storage space and some pretty high-tech details. First, the vehicle offers spacious seating with an optional third-row if you’re willing to spend a little extra cash. Second, the vehicle includes a 10.25” touch screen display, an LED ambient lighting system, and 12-point adjustable seats.

Beyond the finely tuned interior design, this vehicle offers a powerful engine and very fast acceleration.

This SUV is notable for two things: it’s fast and it’s expensive.

The AMG GLC63 S Coupe might not have the sleekest name out there, but the vehicle features a twin-turbo V8 engine that pushes it from 0 to 60 mph in less than four seconds. But all the power comes at a price: the SUVs base model comes in at over $85,000 — and that price can easily jump to over $95,000 if you want any special features.

Unsurprisingly, Mercedes doubles down on the tech with this SUV with an optional control display clocking in at over $1,000.

Speed is a real hallmark of this SUV. According to one test, the vehicle can travel ¼ mile in less than 12 seconds. 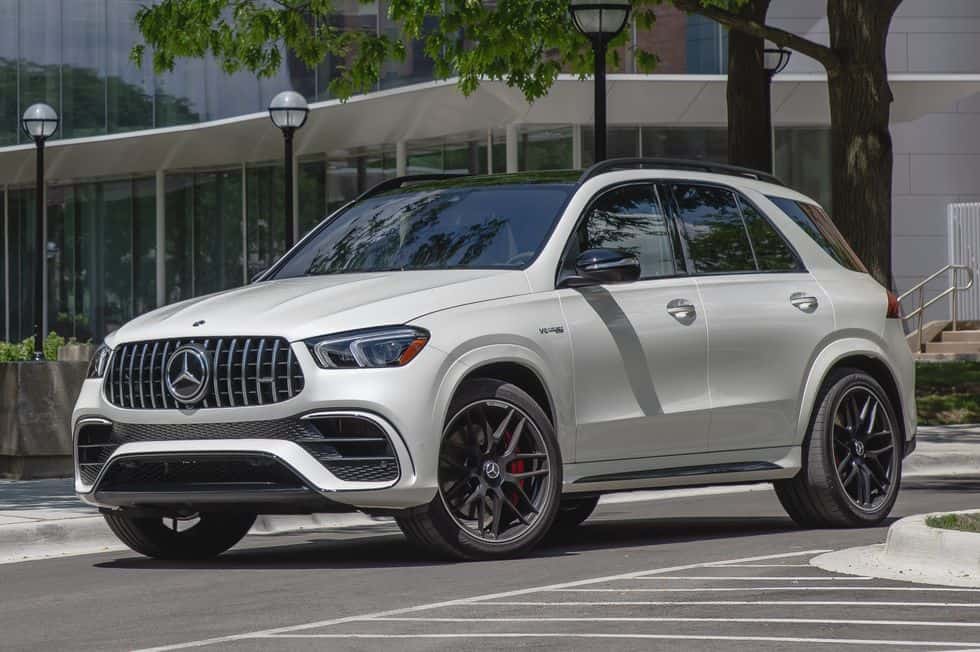 Called a “speed demon,” this is another really fast car from Mercedes. That’s pretty unsurprising considering the vehicle is decked out with a 4.0-liter V8 bi-turbo engine.

The AMG GLE64 S keeps up Mercedes’ trend of high-end interiors, too. The vehicle features ambient lighting control, dual 12.3” display screens, and a variety of luxury touches like Nappa leather.

This vehicle might be a speed demon, but Mercedes’ rides weren’t always fast. One of the company’s first motorized vehicles was an omnibus that drove around a small section of Germany. The early form of transport was so low-power that the nation’s winter temperatures were enough to stop the omnibus’s travel. 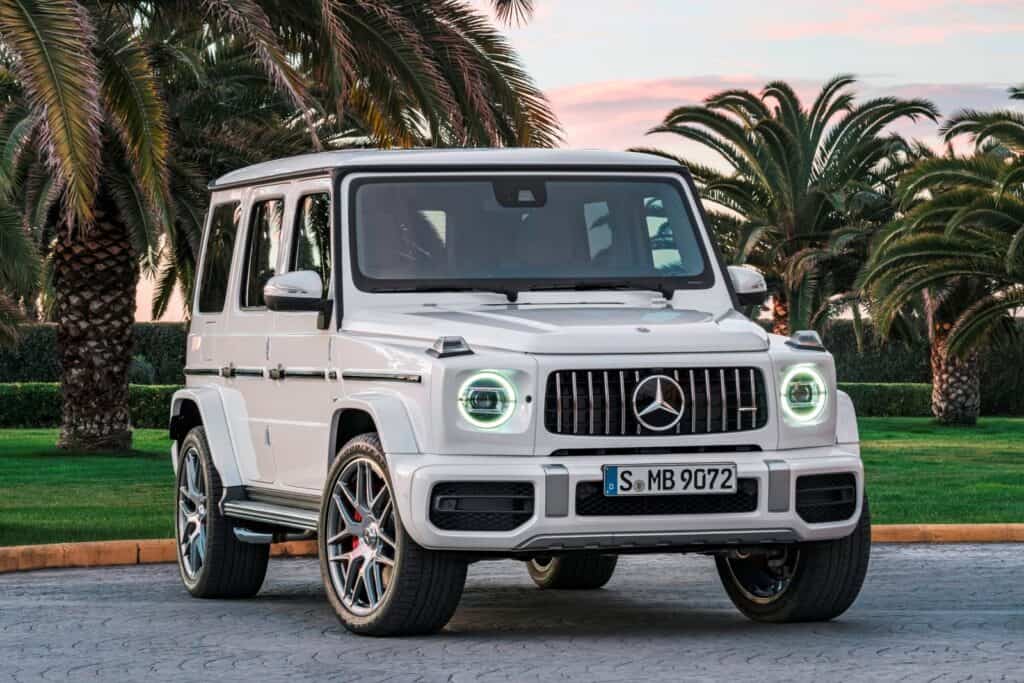 Like many other vehicles from Mercedes, the SUV offers a powerful engine taking riders from 0 to 60 mph in just a few seconds alongside leather seats and enough power for rugged off-roading.

Interestingly, this vehicle seems to have quite a few drawbacks compared to other entries on this list. Most notably, one reviewer says the SUV is uncomfortably loud and swallows tons of gas.

Although this vehicle came out in 2021, the design has roots in the 70s. The result is a very boxy car and a set of 20-inch alloys. 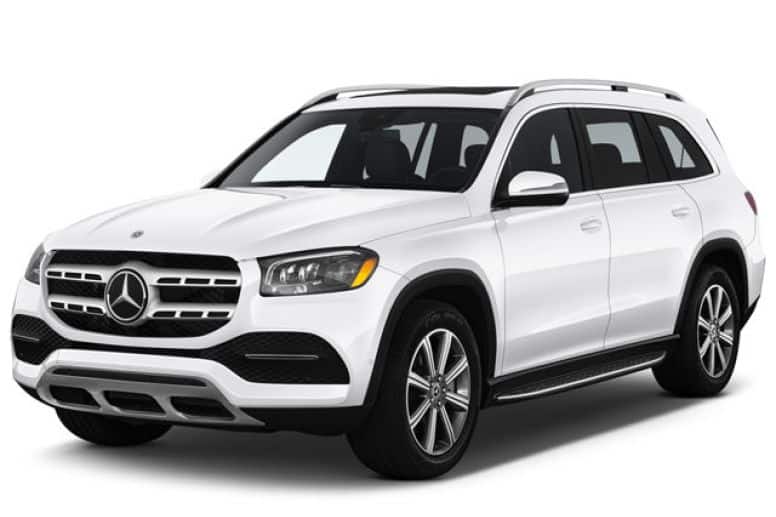 Mercedes-Maybach GLS 600 is the most expensive Mercedes you can buy.

With the base model coming in at a whopping $160,500, this is by far the most expensive Mercedes you can buy.

The Maybach GLS 600 features a dedicated heating and cooling system for each of its four seats, enough power to hit 60 mph in just 4.1 seconds, and an optional champagne cooler.

After a few special editions, the vehicle can easily hit the $200,000 mark — a jump that somehow makes the first entry’s $50,000 price tag look small.

Although Maybach is now a subsidiary of Mercedes, the company started as an independent car maker in 1909.