Lamborghini is a subsidiary of Volkswagen, based in Sant’Agata Bolognese in Italy. It was founded in 1963 to compete with the luxury Italian motorsports designer, Ferrari. Lamborghini set itself apart by employing a rear-wheel drive layout and a rear mid-engine. Global financial issues in 1973 brought tough times for the company, leading even to bankruptcy and reacquisition in 1978.

However, it eventually landed back with the Volkswagen Group in 80s and combined with Audi to begin its now historic and still-ongoing run on the luxury motorsports market. Today, the brand is synonymous with high performance roadsters and racing cars. Here is our list of the most expensive Lamborghinis that money can buy. 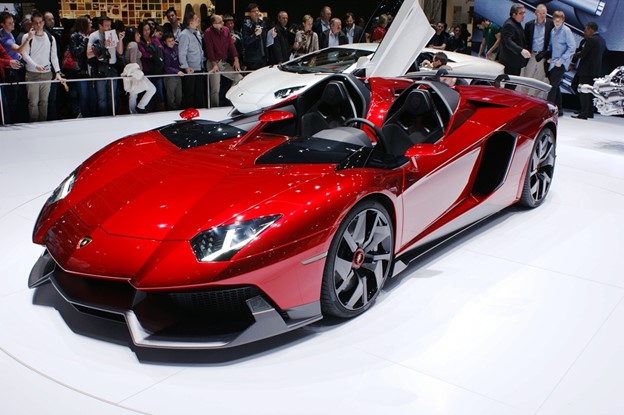 The Lamborghini Aventador is sports car that is still in production in 2021 after being resumed in 2017. They began in 2011 in two styles, a 2-door coupe and a 2-door roadster. The Aventador J was a special edition roadster made 6 months after the first model debuted. Lamborghini officially showcased this beauty for the first time at the Geneva Motor Show in 2012.

The car has no roof or windows. It’s a barchetta concept car with a V12 engine (same as the previous Aventador) and doesn’t even have a radio or A/C unit. The car weighs 3,472 pounds and sold for $2.8 million.

“Aventador” is a name in Spanish that refers to a 1993 fighting bull that had become famous throughout Europe since his debut in Zaragoza, Aragon. The “J” is a reference to “Jota,” which was a one-off concept car in the 1970s, the Lamborghini Miura Jota, which designer Filippo Perini was still very proud of.

The Lamborghini Centenario Roadster is built on a lightweight carbon fibre construct whose chassis is built right into the body (the word for that is “monocoque”). The 770 hp engine can hit 62 mph or 100 km/h from zero in 2.9 seconds.

Lamborghini’s iconic rear-wheel steering comes to bear on the car’s mind-alteringly good handling on the road (if you can find a place to legally drive it, that is). To own this 2017 masterclass in design cost its drivers $2.92 million.

The Centenario line of Lamborghinis are most known for their experimental color finishes. The silver sheen on this roadster is called “Argento Centenario” and is exclusive to this model. To achieve its glossy matte finish, the metal is dissolved to bring out its natural color grain. 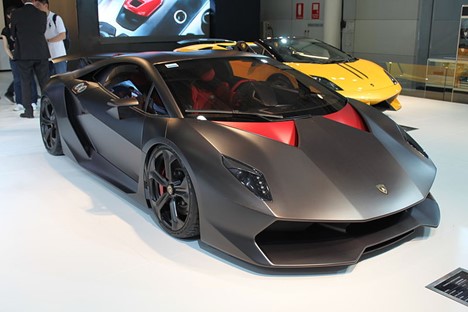 The Lamborghini Sesto Elemento Concept car was produced in a limited edition between 2010 and 2012. Only 20 of these mid-engine, 4WD sportscars were ever produced. It debuted at the Paris Motor Show in 2010 with a chassis built of carbon fibre, which is what “sesto elemento” or “sixth element” refers to.

In fact, this concept car was the first ever built using forged carbon fibre. In keeping with Lamborghini’s obsession with hexagons, the Sesto Elemento’s engine is mounted with 10 hexagonal holes that cool it off. This is required in order for the car to go from 0 to 100 km/h (or 62 mph) in 2.5 seconds. The car costs $2.92 million.

Unlike many cars on this list, the Sesto Elemento is too fast and powerful to be street legal. This is due both to its lightweight construction (it only weighs 2,202 pounds) and aerodynamic design. 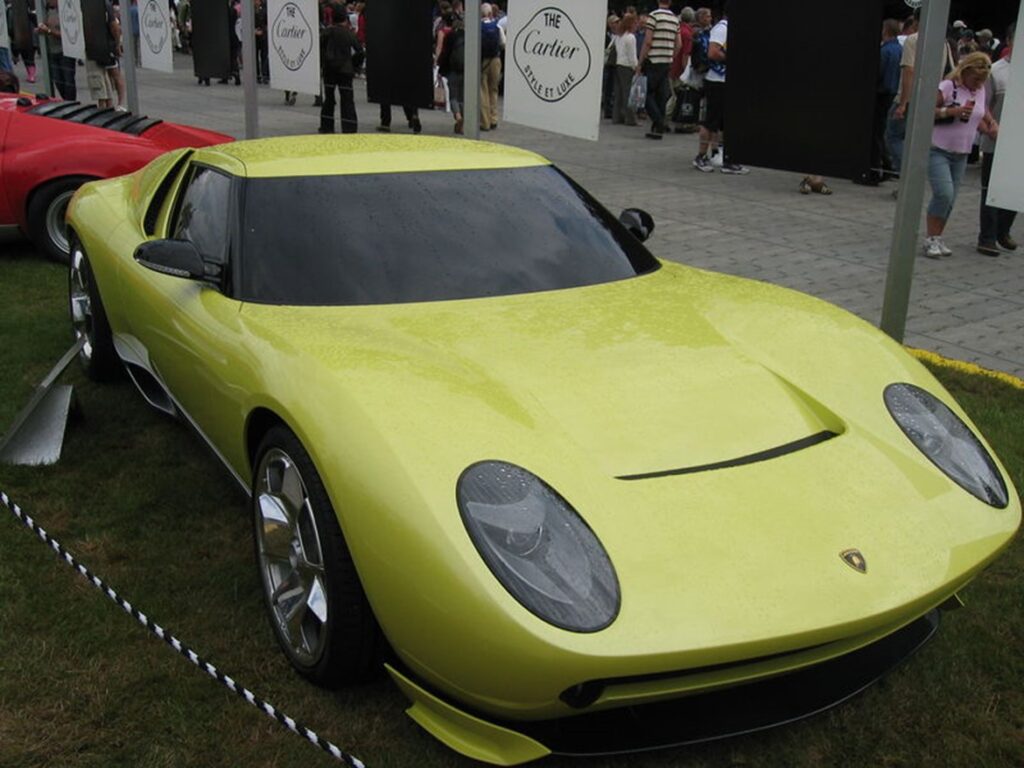 The Lamborghini Miura Concept car was built in 2006. It’s a 2-door coupe, road ready, with no pretensions to be a racing vehicle. This is a show car designed to harken back to retro Lamborghinis from the 60s and 70s. It was presented at The Museum of Television and Radio to commemorate the brand’s 40th anniversary, which began with the first Miura in 1966 at the Geneva Motor Show.

The car was conceptualized by Walter de’Silva, the now-infamously talented Lamborghini design chief. The $3 million car is built on the basic structure of the Murcielago but designed to remind its luxury driver of the classic Miura.

Only 764 Lamborghini Miuras were built in total from 1966 to 1973. The Miura was the first supercar conceived and released with the now-classic layout (a rear mid-engined two-seater) that you see in pretty much any high-performance racing supercar today.

The Lamborghini Sián FKP 37 is a hybrid sports car powered with a V12 engine, the first to be so. The name “Sian” means “lightning” in Bolognese and refers to the car’s hybrid supercapacitors. The car’s top speed of 350 km/h or 220 mph only adds credence to the name.

A supercapacitor or ultracapacitor stores and releases electrical power, which makes cars that use them able to store and discharge more energy in a static state. They use capacitors to physically store energy, rather than rely on a chemical reaction. This means that they don’t degrade like traditional batteries, don’t impact the environment the same way, and can even charge at speed. 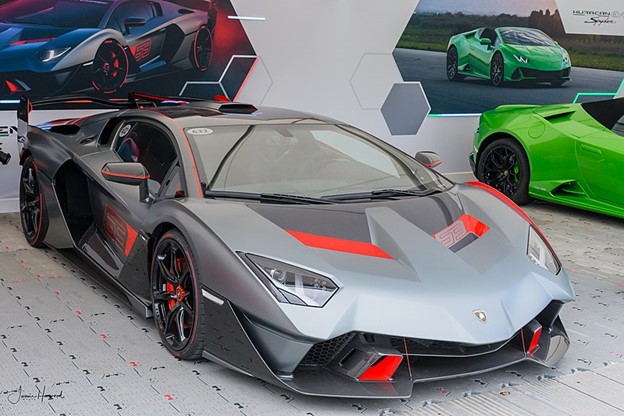 The Sant’Agata Bolognese motorsport circuit doesn’t see one-off concept cars too often. Enter the Lamborghini SC18 Alston, a car that is technically road-worthy but was built to be the king of the track. The front hood has the most efficient air intakes in the business. The rest of the car is aerodynamically revolutionary, featuring side and rear fins, scoops, fenders, and more. This includes a carbon fibre wing with settings that the driver can control for different track conditions.

To own this car, which represents the sum of Lamborghini’s motorsports department’s (or Squadra Corse) competitive edge, would cost $7 million.

Squadra Corse specializes in making racing versions of luxury supercars, many of which are road-approved as well. They have three different series of championship model vehicles, corresponding to America, Europe, and Asia. To test these models, Lamborghini holds its own championship event, the Super Trofeo, which has four driver categories and climaxes with a World Final race. 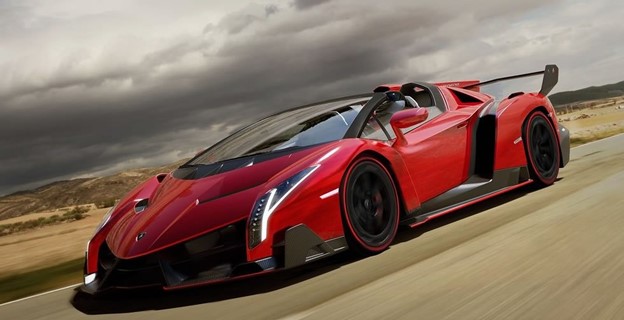 At the top of this list, these Lamborghini concept cars hit the upper ceiling of Italian car manufacturing and made-for-speed technology. This Veneno Roadster runs on a V12, 6.5 L engine that can get up to 355 km/h (220.58 mph). Its entire visual design is drawn to a point on the front that gives the car the unmistakable impression of an arrowhead careening down the open road.

This aerodynamic supercar was built in tandem with the coupe version, which sold for around $5.3 million. The roadster version is an $8.3 million car.

This car handles like a racing prototype. It has a rollover bar instead of a roof, with aerodynamic design and stability that rivals the most high-performing racecars in the business. If you think about it, it’s amazing that this thing is even road legal. 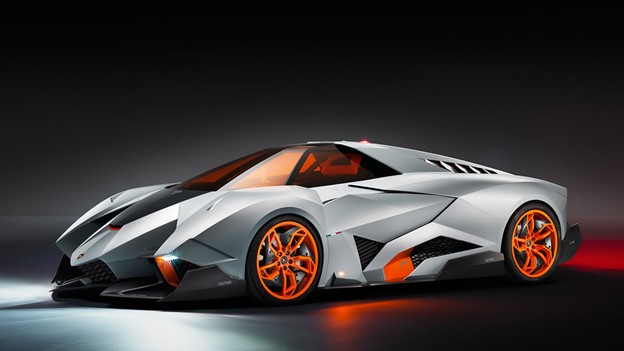 The most expensive Lamborghini is the Lamborghini Egoista. This supercar is a concept car designed by Walter de Silva for the 50th anniversary of the brand. The body, with a hatch-top coupe body style and canopy doors, looks like a future car, like something a billionaire would be driving in Blade Runner.

The 600 hp car has a one-seat cockpit, which gives it the profile of a military jet. It’s so tight in there that the steering wheel has to be removed and put back in to get in and out of the car, similar to a Formula One racer.

For these luxuries, the car costs a mind-numbing $117 million.

“Egoista” is a word that in many romance languages like Spanish and Italian means “selfish.” Its hedonistic intentions carry over to its absurd price. The car is now in the Museo Lamborghini in Italy.

Lamborghini was founded almost 60 years ago to compete with the luxury roadsters of Ferrari. Now, they are nearly as synonymous with luxurious, high-performance racing vehicles as their competition. The Lamborghinis on this list are the 8 most expensive that you can buy. Many were produced in very limited editions and sell for tens of millions of dollars. Any lover of luxury roadsters would feel privileged to have ever seen one of these pieces of automotive art, let alone own one.