Yu-Gi-Oh!, was a Shonen Jump manga that really took off with the introduction of the trading card game in 1999. It was many gamers’ introduction to complex card games. Yu-Gi-Oh!, as the card game but also as the popular anime, led many to adopt a lifelong love of collecting, trading, and playing cards. Whether they stuck with Yu-Gi-Oh! or moved on to Magic: The Gathering, the game holds a special place in many gamers’ hearts.

Today, many of the cards, particularly from the first two sets, are extremely valuable. We compiled lists from the PSA (Professional Sports Authenticator) as well as auction sites like eBay to bring you this list of the 8 most expensive Yu-Gi-Oh! cards to date. 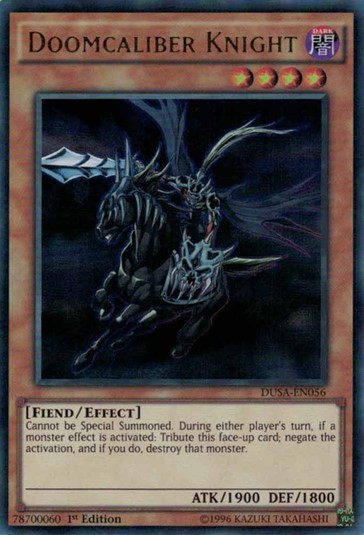 The Dooomcaliber Knight has the distinction of being the newest card on this list, released in 2008 as part of the Shonen Jump Championship Series. This series was created to promote tournaments in North America between 2004 and 2010. All 75 tournaments featured unique prize cards, many of which have become some of the most valuable in Yu-Gi-Oh!

Doomcaliber Knight is a monster card that was one of these limited-edition prizes. Though it only has 1900 ATK points, this 4-star monster still has utility in the modern game, unlike many cards on this list. Its ability to sacrifice itself to cancel any monster effect is a brutally powerful counter even in the current meta, making this card a popular anti-meta card for the side deck.

Doomcaliber Knight was the sixth limited-edition prize card printed for the Shonen Jump tournaments. Only 68 are known to have been given out. 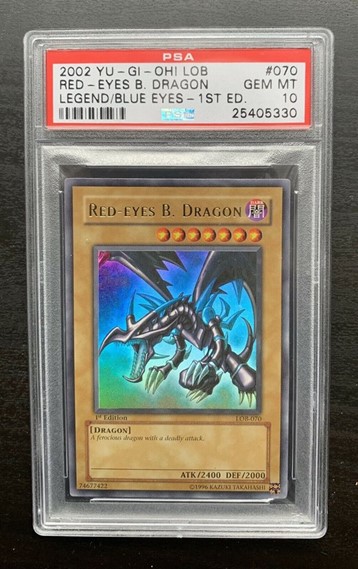 The weaker and less iconic (only slightly) cousin of the Blue Eyes White Dragon, the Red Eyes B. Dragon is also one of the game’s most valuable cards in 1st edition and mint condition. The iconic card of Yugi’s best pal, Joey Wheeler (after he won it from Rex Raptor), this monster has even been given its own deck class in recent years.

In 2002, it was part of the Legend of Blue Eyes White Dragon, the game’s first expansion. Cards from that era are often rare, with a mint condition Red Eyes selling for $29,000 in August 2021.

Only 69 Red Eyes B. Dragon cards have ever been graded a PSA 10, making it one of the rarest out there. 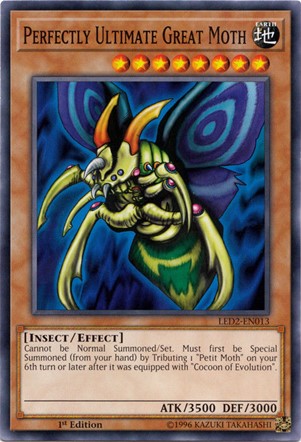 The signature card of the player, Weevil Underwood, is also one of the game’s most valuable. It is notable on this list for being the oldest card, part of the game’s original run in 1999, released only as a DDS promo.

The Japanese version of this coveted card sold in August 2021 for $29,999.99. The person who bought it likely didn’t do so to play with it, since this card can only be summoned by tributing a Petit Moth equipped with Cocoon of Evolution after six turns. While the Perfectly Ultimate Great Moth is a powerhouse in the original meta with 3500 ATK and 3000 DEF, not even those stats are worth the wait.

This card is so rare that only three have ever been graded by the PSA. 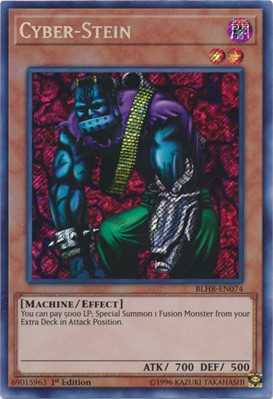 Cyber-Stein is not one of the more recognizable Yu-Gi-Oh! cards, nor is it from the original two sets, which are usually considered the most valuable. Instead, this card is from the Shonen Jump Championship Series from 2004. It has an outdated but interesting effect that allows its player to pay 5,000 life points (more than players started with, in the original game) to summon a Fusion Monster.

Fusion Monsters were so powerful and difficult to summon that this could have turned the tide of a game, though the cost all but guaranteed it would never happen. Despite low utility, this limited-edition card sold in October 2020 for $30,100.

This card was given away after GenCon tournaments in the mid-late 2000s. A total of 18 of these cards are known to exist in that original version, with 126 more released later as a 2009 promotional for “Upper Deck Day.” 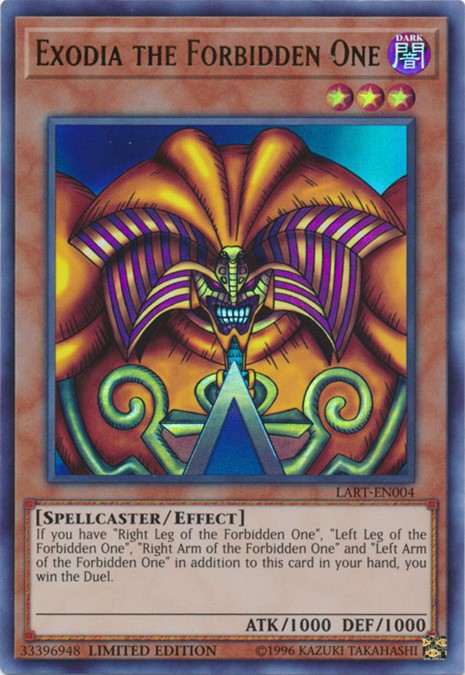 Now, we’re getting into the truly iconic cards. Exodia The Forbidden One, for a while the unofficial mascot of the game, played a significant role in the early season of the anime. It continues to be the defining “rare” card as well as one of the very few tournament-legal “instant win” cards.

In the first expansion to Yu-Gi-Oh!, Legend of Blue Eyes White Dragon, Exodia debuted as one of its ten original ultra rares. Today, the head of Exodia from this set in mint first condition can earn its seller $35,000 at auction.

The other four “pieces” of Exodia are also rare, but they have common versions that do not take in nearly as much. The head of Exodia, one of the most recognizable cards in the game, is the most valuable. Only 365 of them have ever been officially graded for quality by the PSA. 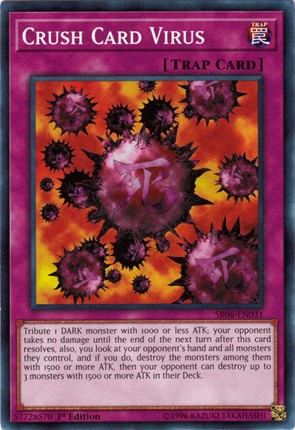 The Crush Card Virus trap card is well-known as one of the most devastating cards in the game. For the price of a single sacrifice, the player can not only check their opponent’s hand for three turns but can send 3 monsters with 1500 or more attack power to the graveyard. It was famously used in the anime by Seto Kaiba, as part of his “seek and destroy” play strategy.

In real life, the card was a Shonen Jump Championship Series prize card, with only 40 known to exist, given out over 10 championship games. In addition, 6 more promotional cards were printed, bringing the total up to 46. At auction, this card can earn its owner nearly $50,000.

Despite the card’s presence in the anime and its tantalizingly powerful effect, it has been on the Forbidden list of Yu-Gi-Oh! tournament play for a long time. This means that even if you happened to own it, you can’t use it in an official duel. 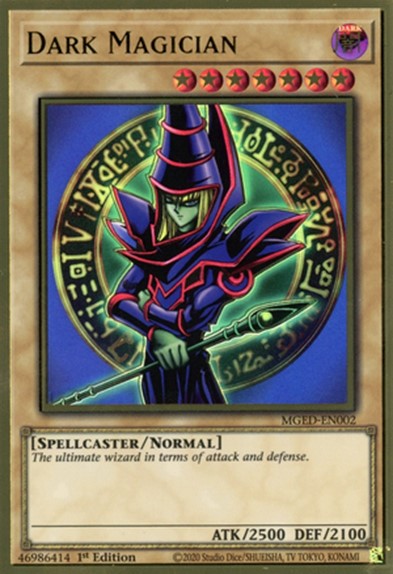 It makes sense that the Dark Magician would be one of the game’s rarest cards, being Yugi’s iconic monster. The version that is enormously rare, which can sell for $85,000 at auctions, is actually not the original 1999 one. The 2002 variant in the Legend of Blue Eyes White Dragon set (LOB) is the rarer one.

This version is well-known for its green skin and reddish cloak. The card in the anime was owned by Arkana, who dueled Yugi with his own Dark Magician and was defeated by the Dark Magician Girl.

The original 1999 Dark Magician with the normal skin and purple cloak is nothing to sneeze at. In mint, 1st edition condition, it can still fetch $10,000 at auctions. 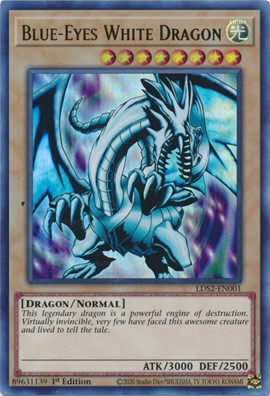 The specific version of the card that can take in over $85,000, as it did in an October 2020 auction, is the alternate art version of the original Blue Eyes in the Legend of Blue Eyes White Dragon (LOB) set released in 2002.

A first edition of the original 1999 Blue Eyes is another valuable card. We decided not to include it as a separate entry on this list for the sake of variety, but a 1st edition, mint condition Blue Eyes in the original set can take in as much as $20,000 at auction.

Yui-Gi-Oh! is not only one of the original trading card games but remains a popular pastime, tournament sport, online game, and collector’s item. While you may not have these ultra-rare cards worth tens of thousands of dollars in your collection, getting into the game even now is as easy and fun as ever. And who knows – if you played the game back in the day, it may be worth pulling out the old shoebox to see if you have any Blue Eyes lying around.