From Babe Ruth to Willie Mays, baseball has given America some of its most iconic public figures and most historic cultural moments. Often called America’s Pastime, the sport has been present in world-changing events like the Civil War and remains one of the nation’s most popular sports.

As such an iconic sport, baseball memorabilia is often sold for a lot of money. The most obvious form of memorabilia is the baseball itself. Most of the time, the most expensive baseballs are signed by famous players. These balls can sell for tens of thousands of dollars. Learn more about the most expensive autographed baseballs with this top 10 list.

Price Sold: $12,718.80
Baseball Fact: This baseball was signed in 1931
History Fact: Baseball player Honus Wagner was known as the Flying Dutchman
Number of Signatures: One 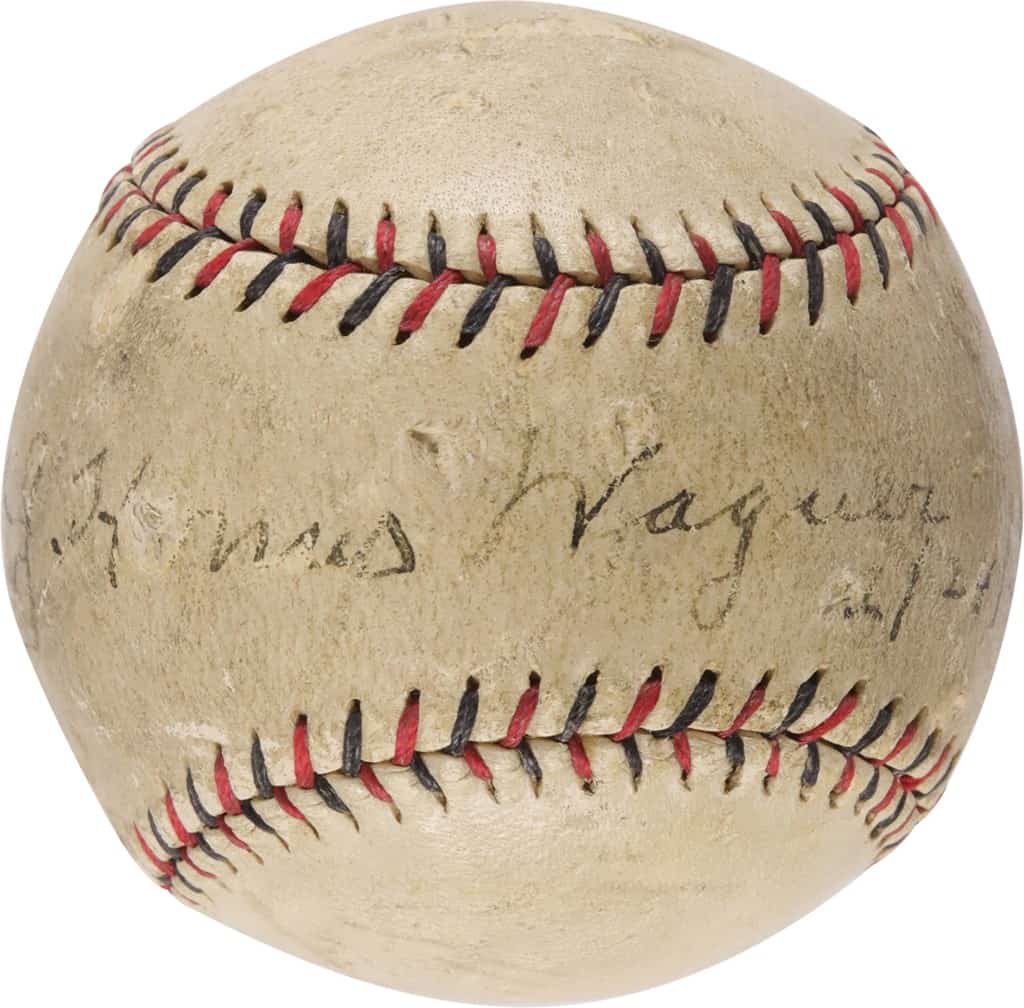 Honus Wagner played 21 impressive seasons. The icon was known as the Flying Dutchman during his career before retiring in 1917.

Years after retiring, Wagner signed a baseball for a lucky fan on Christmas Eve, 1931. The ball features Wagner’s autograph alongside the date. It’s not known who this lucky fan was, but their early Christmas gift went on to sell for more than $12,000 at an auction held by Lelands.

Honus Wagner was inducted into the Baseball Hall of Fame in 1936. The famous player later passed away on December 6, 1955. Wagner has been called “The nearest thing to a perfect player.” 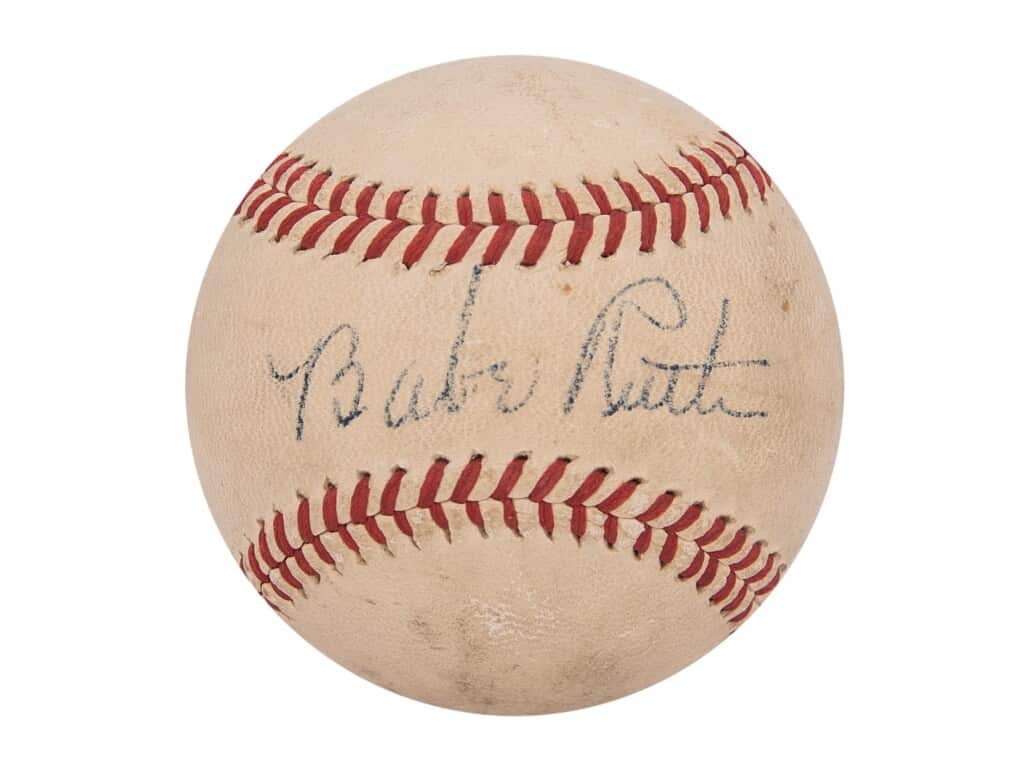 During WWII, Babe Ruth traveled the country trying to support the Allied response to Hitler. During trips to visit troops and other events, Ruth helped boost morale and raise money. At some point during these years, Ruth autographed a Reach Official American League ball. The ball eventually sold for more than $15,000 at a Sotheby’s auction. The ball was originally expected to sell for more than $20,000.

After he died in 1948, more than 100,000 people lined up to pay their respects at Ruth’s casket. Today, Ruth is considered one of the greatest figures in baseball of all time.

Price Sold: $16,194
Baseball Fact: This baseball was autographed with a steel-tipped fountain pen
History Fact: William Harridge helped set up the first All-Star game of the major league
Number of Signatures: One 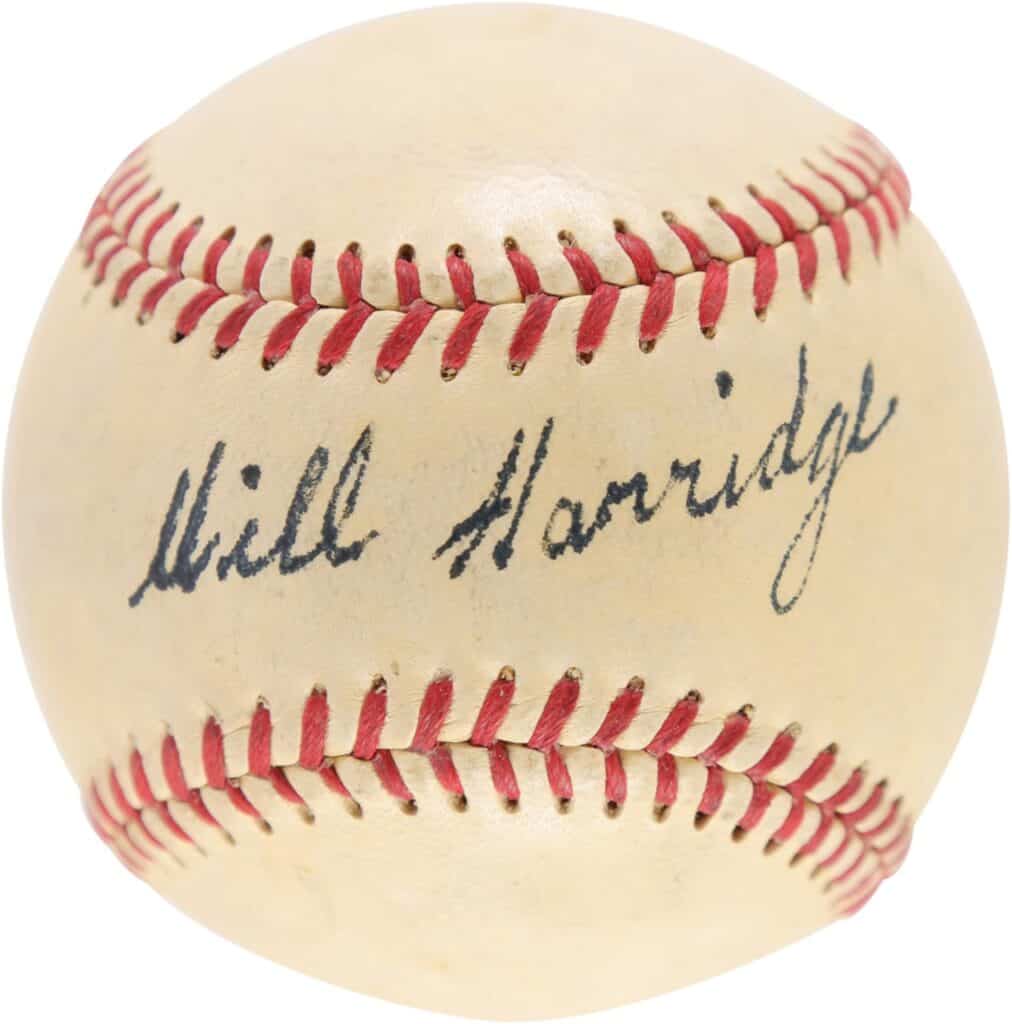 Unlike a lot of expensive autographed baseballs, this ball wasn’t signed by a player. Instead, it was signed by William Harridge, a professional baseball executive who helped set up the first major league All-Star game.

Harridge got his start in the world of professional baseball when he was hired as AL President Ban Johnson’s personal secretary. Over the years, William worked his way up the ladder and became president of the American League in 1931.

Harridge was initially going to temporarily serve as president of the American League, but he ended up remaining president for 27 years.

Price Sold: $16,798.80
Baseball Fact: This baseball was signed with a blue fountain pen
History Fact: As pitcher, Cy Young holds the record for most wins in baseball history
Number of Signatures: One 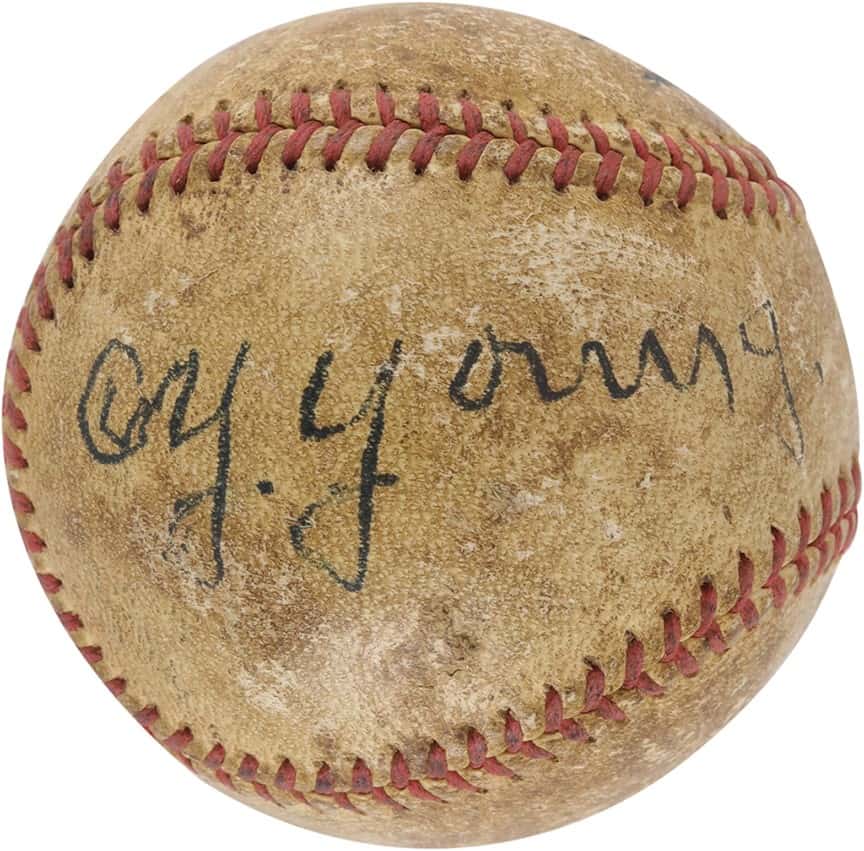 Coming in at number seven is a baseball signed by pitcher Cy Young. The ball features one signature and sold for more than $16,000 at an auction held by Lelands. Young was inducted into the Baseball Hall of Fame in 1937 after one of the most impressive careers in the sport.

Young holds a lot of records, including the record for most innings pitched at 7,356. Young is also number four for all-time shutouts with an impressive 76 under his belt.

Young was right-handed. He remained in the top 10 players in his league for the number of innings pitched for a crazy 19 years. 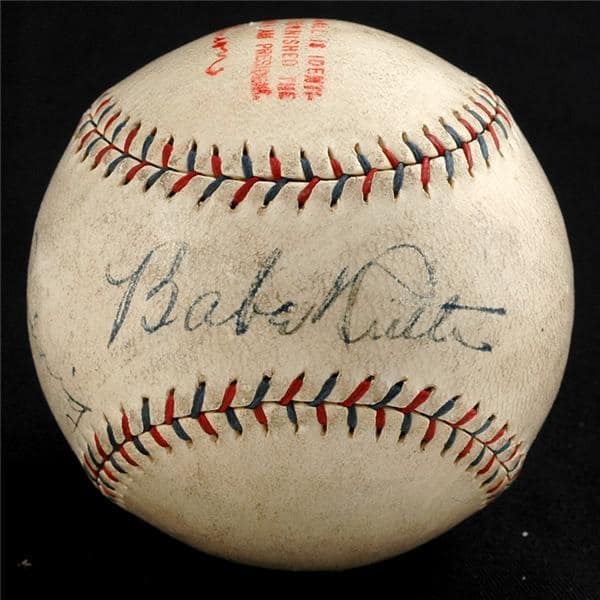 One signature is good, two are great.

This baseball signed by Babe Ruth and Lou Gehrig sold for more than $23,000 in 2006, making it the sixth-most expensive on record.

Ruth and Gehrig are both iconic players. Gehrig was inducted into the Hall of Fame in 1939, three years after Ruth. Gehrig was a first baseman who “seemed so durable that…could have played forever.” Gehrig played for 17 seasons while Ruth played 22.

Ruth hit 714 home runs over the course of his career. “It wasn’t that he hit more home runs than anybody else,” said Red Smith, “he hit them better, higher, farther, with more theatrical timing and a more flamboyant flourish.”

Price Sold: $50,400
Baseball Fact: This baseball was autographed by several Hall of Famers
History Fact: This ball was signed on June 12, 1939
Number of Signatures: More than 5 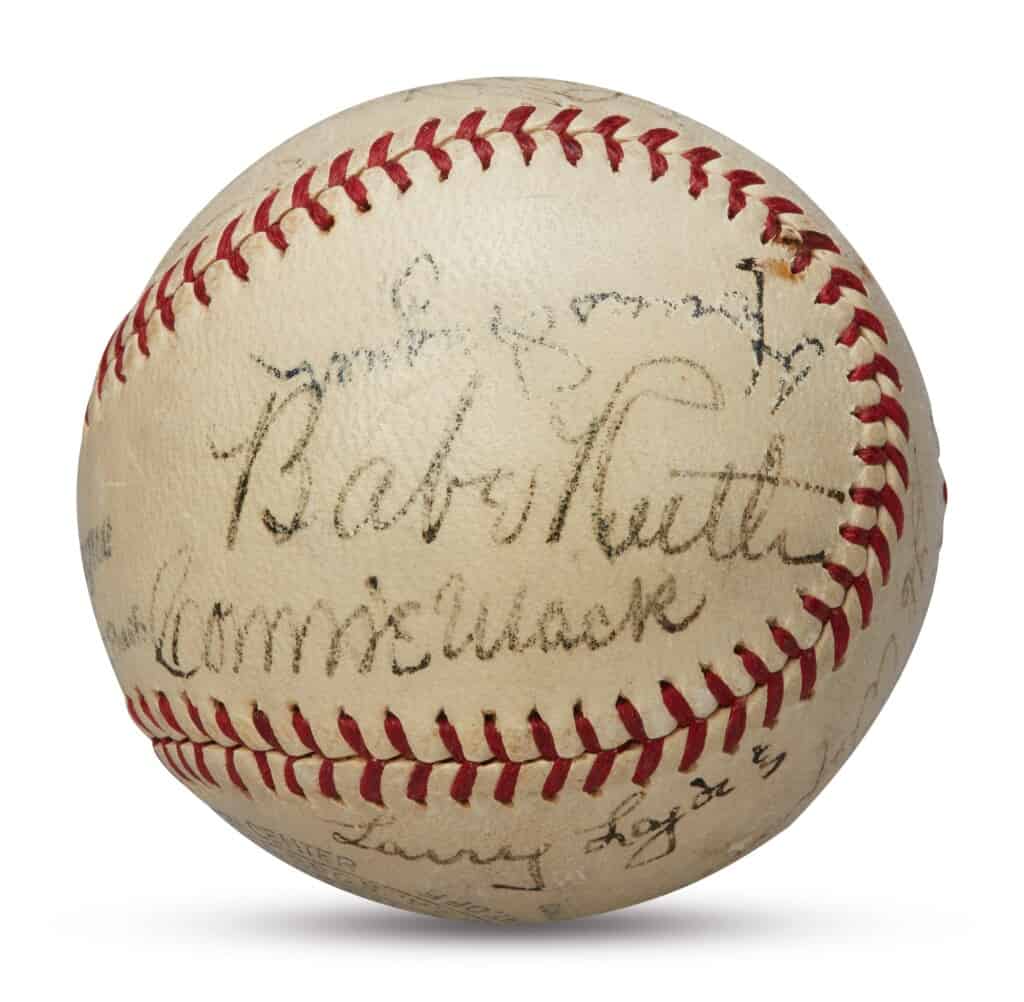 This baseball was signed by several members of the Baseball Hall of Fame in 1939. The autographs include Honus Wagner, Dizzy Dean, Connie Mack, and much more. Auctioning for more than $50,000, this baseball is the fifth-most expensive ever sold.

Signed on June 12, 1939, this iconic ball coincided with the opening of the National Baseball Hall of Fame and Museum as well as the very first official ceremony inducting its honorees.

This ball was sold as part of Sotheby’s auction of the Copeland Collection. The ball was expected to sell for between $50,000 and $75,000. 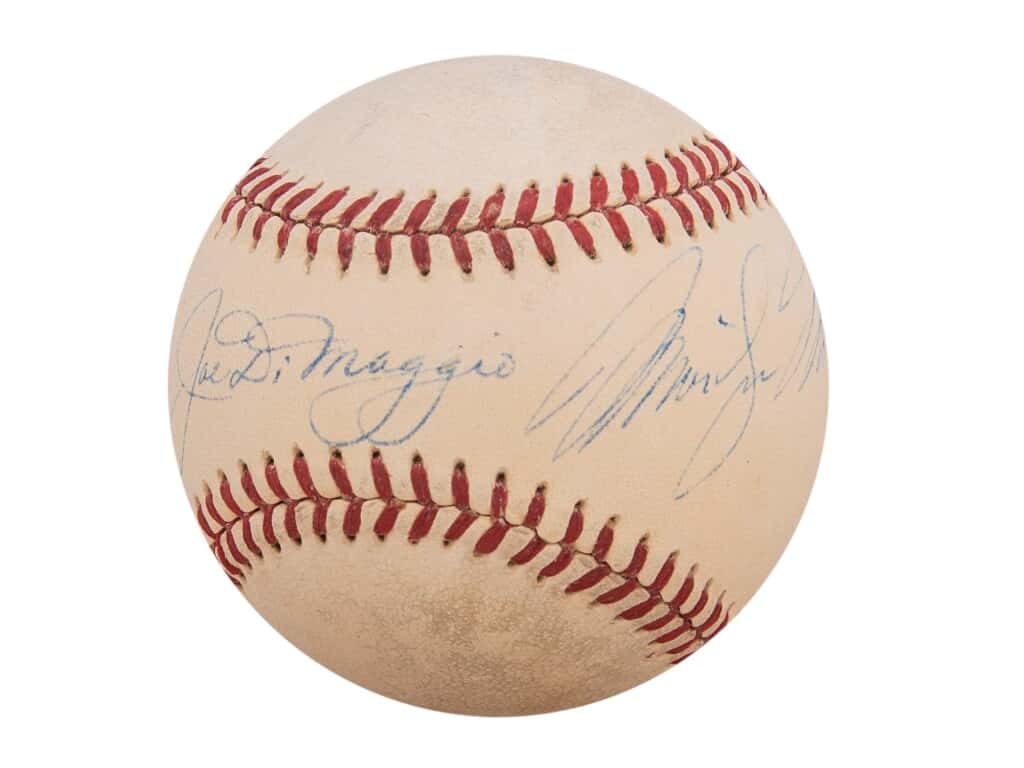 Here we have another baseball signed by a non-player. This time it’s Marilyn Monroe, one of the most iconic public figures of the 20th century.

Monroe and DiMaggio were married for a brief period in the 1950s. This ball was signed by the duo in the spring of 1961 — several years of their divorce. The ex-couple was reportedly trying to reconcile after the ordeal, leading to this one-of-a-kind ball.

Marilyn Monroe lived with a series of foster families during his tumultuous childhood. Monroe’s birth name was Norma Jeane Mortenson.

Price Sold: $388,375
Baseball Fact: This baseball was given to a Hollywood publicist by Ruth’s widow after his death
History Fact: Babe Ruth was born in 1895
Number of Signatures: One 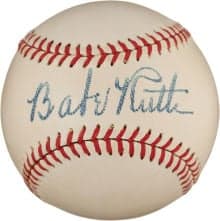 Heading into the top three we have the “best known” Babe Ruth autographed baseball. The famous ball was gifted to a Hollywood publicist by Ruth’s widow. A few years before its record-breaking sale price, the ball sold for $86,000 through Hunt Auctions. Later, the ball sold again for a jaw-dropping $388,375 — making it the third-most expensive autographed baseball ever sold.

Babe Ruth’s real name was George Herman Ruth, Jr. His nickname “Babe” caught on after a journalist referred to him as “Dunn’s babe,” referencing Jack Dunn. Dunn was the owner of a minor league team Babe joined in 1914.

Babe Ruth was born in 1895. His father operated a saloon in Baltimore, Maryland. Babe was one of eight Ruth children. Tragically, only Babe and his younger sister reached adulthood. The rest of the family’s children died in infancy. 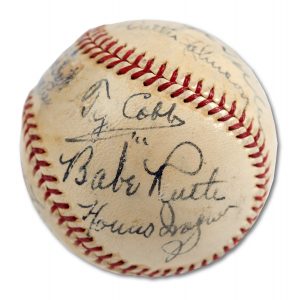 Coming in at number two is another ball signed by several Hall of Famers (including Babe Ruth). This one was also signed at the first Hall of Fame induction ceremony held in 1939. Just over 10 iconic players signed the baseball, making it one of the most unique pieces of baseball memorabilia on the planet. The one-of-a-kind ball sold for more than $623,000 in 2018, making it the second-most expensive autographed baseball ever sold.

Price Sold: $700,000
Baseball Fact: Babe Ruth hit a home run with this baseball
History Fact: This home-run ball was the first in an All-Star game
Number of Signatures: One 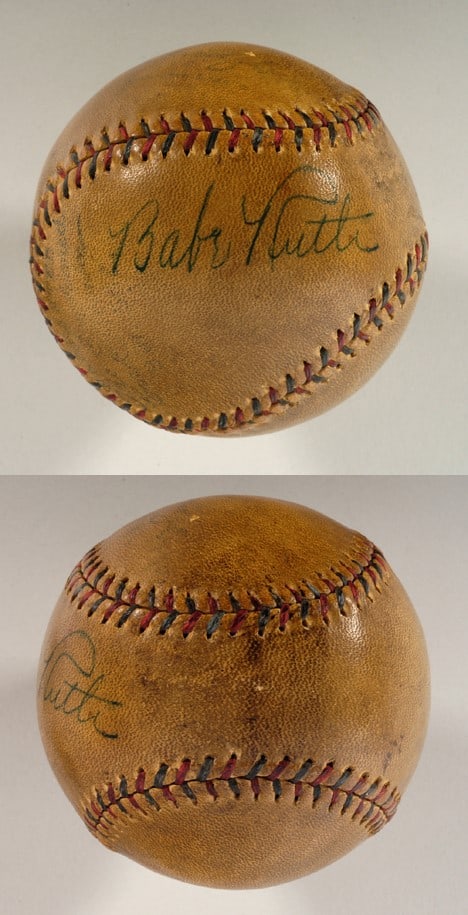 The Babe Ruth home run ball is the most expensive autographed baseball ever sold.

In the 1930s, during the struggle of the Great Depression, a baseball game was organized by a sports editor named Arch Wood. The game pit the world’s best players against each other, with Babe Ruth serving as the main attraction. During the All-Star game, Ruth hit a home run with this very ball. The remarkable feat marked the very first home run in All-Star history.

Decades later, the one-of-a-kind signed ball sold for $700,000 — making it the most expensive autographed baseball ever sold.

Babe Ruth was 38 years old when he hit this ball and achieved his historic home run.