Furniture, especially the classic antique pieces that have survived for centuries in pristine condition, can be insanely expensive. Furniture pieces from major periods of design sourced from places as diverse as the dynasties of China to the monarchies of France can be not only pricey but prized collectors items worthy of museum displays.

The most expensive furniture, in addition to being crafted from luxury wood and metal, can showcase the work of sculptors and craftsmen or even contain rare stones. The entire history of interior decorating can be demonstrated by these rare pieces.

Continue reading to learn about the most expensive furniture ever sold. 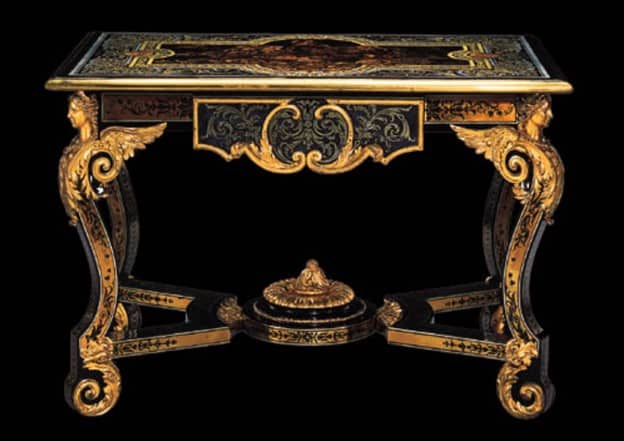 This Louis XIV Ormolu-Mounted Ebony Marquetry Center Table is made from numerous luxury materials including brass, ebony, pewter, tortoiseshell, and blue-stained horn. The table was built around 1685, designed by Andre-Charles Boulle.

This center table is gilded with designs like oak leaves, acanthus scrolls, foliage, and masks. It was first sold in Paris in 1770 by Barthélemy-Augustin Blondel d’Azincourt and has since passed into many collections before selling for $5,726,000 at a Christie’s auction.

Styles of furniture designed in France are often delineated by the monarchs who dictated them. In this case, Louis XIV style refers to furniture designed from 1660 to 1690. It’s noted for its heavy use of marquetry, ebony inlays, and rare materials like exotic woods and mother of pearl. 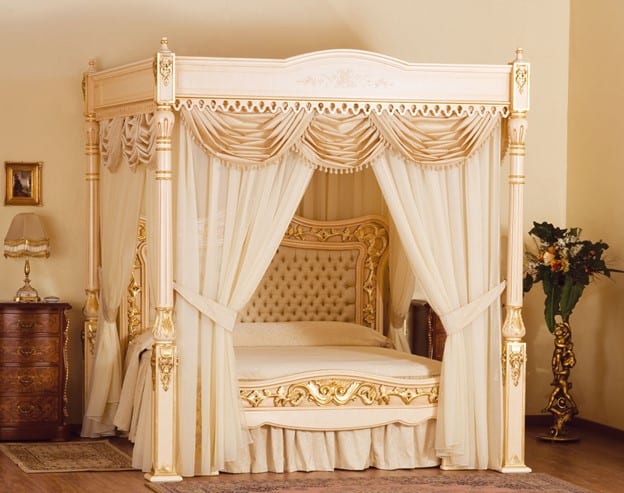 The Baldacchino Supreme Bed was designed by the furniture makers at Nocera Superiore in Italy and Stuart Hughes, the British designer famous for high-end pieces.

This bed is made from chestnut wood with curving ash wood accents and a canopy edged with cherry wood.

The hand-made bed also includes 107 kg of solid 24k gold sculpted into decorative gold leaf filigree. Only two of these beds were made and sold at a price of $6.3 million, making them the most expensive beds of all time.

Stuart Hughes is not only into luxury furniture design. His eponymous brand also creates some of the world’s most expensive iPhone cases, yachts, fashion, liquor, and even entire homes. 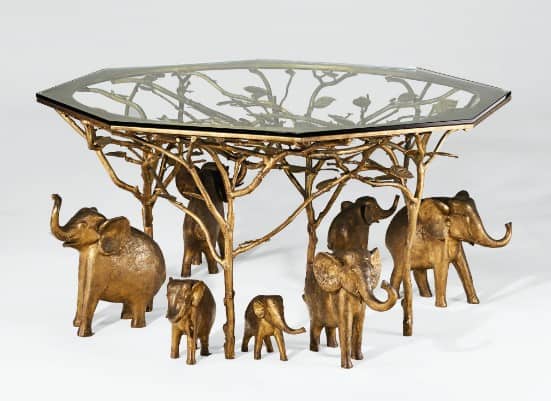 The Troupeau D’Elephants Dans Les Arbres’ Table was made in 2001, making it among the most recent pieces of luxury furniture sold at these prices. It passed across a Christie’s auction block on June 9, 2021 and took in $6.63 million despite a high-end value estimate of only $1.5 million.

The table was designed by Francois-Xavier Lalanne and his team. The table is famous for its free-standing elephant sculptures, which gild its eight-sided bronze structure.

The artistic team known as Les Lalanne included Francois-Xavier and Claude Lalanne, both of whom have now died. The team rejected the trends in Abstract art styles popular in the French 1960s in favor of simpler, realistic representations in sculptures and furniture. They also made the famous “rhinoceros desk.” 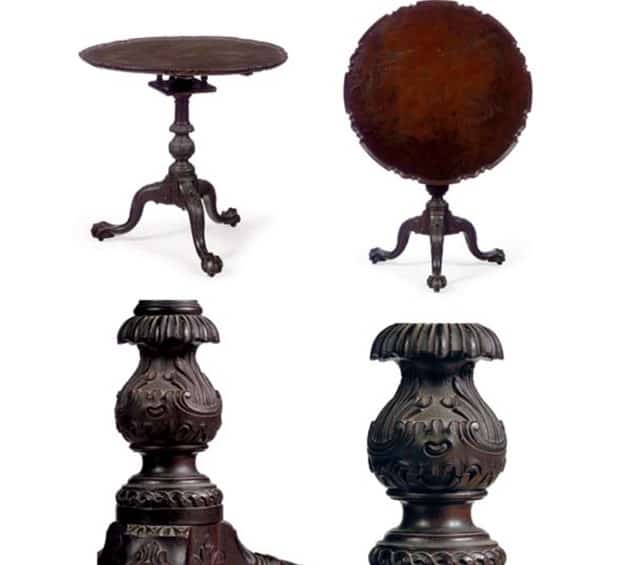 The Fisher-Fox Family Chippendale Carved Mahogany Tea Table was made in Philadelphia around 1760. The furniture maker known as the “Garvan carver” is considered the most likely maker of this gorgeous table, which sold in October 2007 for $6.761 million.

The table still has its original casters, which dramatically increased its value. It was owned by the Wharton Fisher family before being sold at the collection known as “Important American Furniture, Folk Art and Prints Including American Folk Art From the Atwater Kent Museum of Philadelphia.”

The Philadelphia History Museum at the Atwater Kent is a building that was finished in 1826, designed by the famous American architect, John Haviland. It now contains over 100,000 antique art pieces from throughout history. 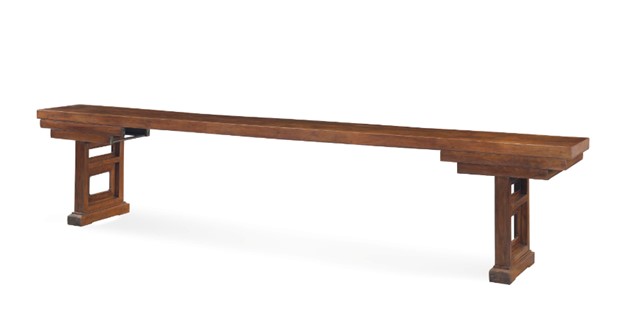 The Huanghuali Plank-Top Pedestal Table is a huge, single-plank table with a beaded edge. Its thick pedestals and trestle legs are separated by single stretchers. It was sold on March 21, 2013 from the collection of Jonathan and Jessika Auerbach for $9,083,750.

The table was dated to China from the 17th-18th century. The table was exhibited in the Denver Art Museum before being sold.

The table is in the huanghuali style, which translates from Chinese to “yellow flowering pear.” It’s rosewood that has been yellowed due to its long-term exposure to light. It has a sweet fragrance and a shiny, almost translucent surface. The wood often forms textured shapes. The more textured, the more prized the wood. 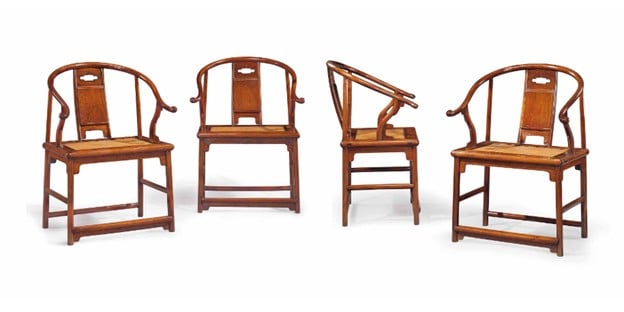 A set of four Huanghuali Horseshoe-back Armchairs formerly owned by Quan Yi sold for an extremely high amount at a Christie’s auction on March 16, 2015, $9.685 million to be exact. They were dated to the 17th century in the Ming Dynasty in China.

The chairs have an elegant, crested design with hook handles, thin aprons, and soft mat seats. The chairs were in the collection of Robert H. Ellsworth in New York. These chairs were only valued at around $900,000, but the allure of the period and their pristine construction brought in ten times the estimated amount.

The Ming Dynasty was an imperial dynasty in China that lasted from 1368 to 1644. It was the last Chinese ruling period that was ruled by the Chinese ethnic majority, the Han. 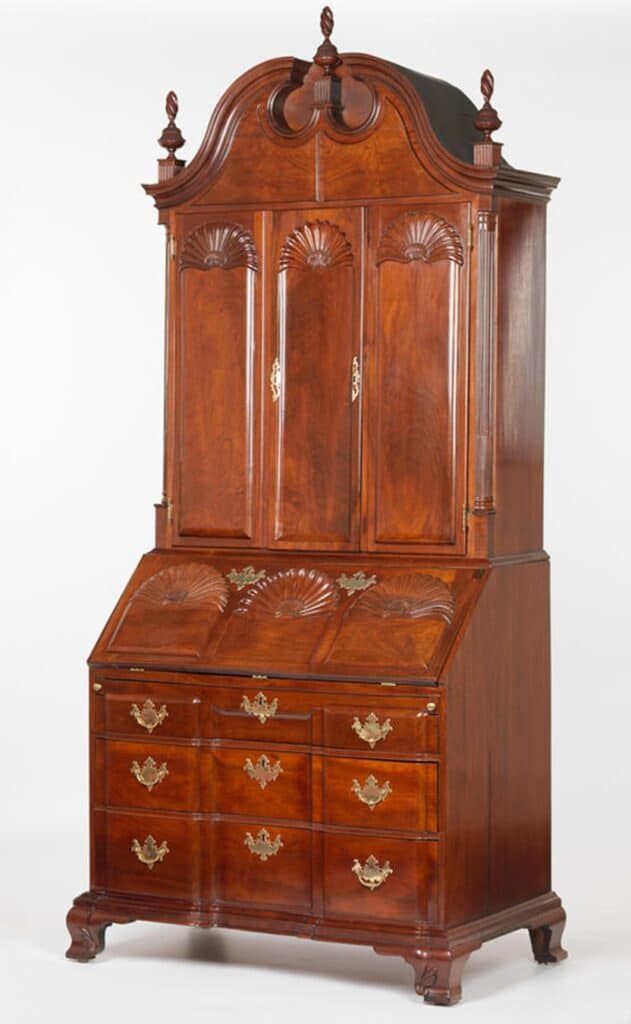 The $11.4 million that this cabinet accrued at auction made it the most expensive desk ever sold.

This desk passed across a New York auction house’s block in 1989, beating the most expensive piece of furniture ever sold at the time. That was a Louis XVI table once owned by Marie Antoinette that sold in 1988 for $2.97 million. 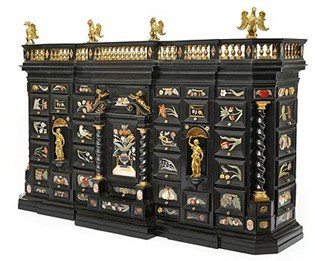 The Florentine Pietra Dura, Ebony and Ormolu Cabinet was sold at the Christie’s auction known as “Important European Furniture” in December of 2004. The cabinet was designed sometime in the 1720s or early 1730s at the Grand Ducal Workshops. They include figures of the four seasons made from bronze by Girolamo Ticciati.

The ten drawers are lined with cedar, each mounted with ormulu and accented with amethyst quartz. The semi-precious stones are a major selling point of this cabinet, which is covered in sculpted female masks, fruit, designs of leaves, a studded clock face, and more. The Florentine Pietra Dura, Ebony and Ormolu Cabinet sold for the GBP equivalent of $23,187,572.83.

The cabinet is ebony-veneered and paneled with semi-precious stones like lapis lazuli and Sicilian red jasper. Lapis lazuli has been used for decorative purposes practically for as long as humans have been decorating, with the oldest examples dating back to 7570 BC. 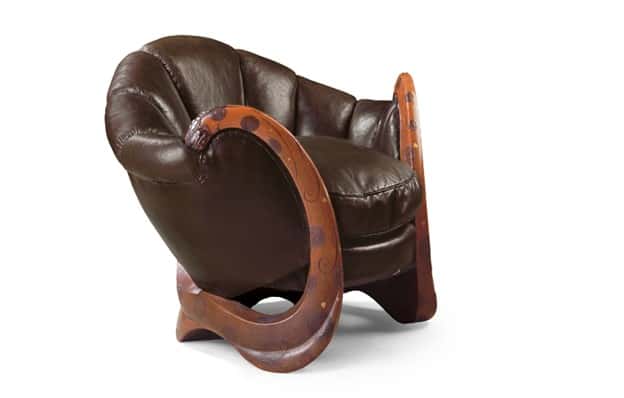 The Fauteuil Aux Dragons or “Armchair with Dragons” is the most expensive chair ever sold. It was made circa 1917 to 1919 for the Suzanne Talbot collection in the French city of Madame Mathieu-Levy. It was later bought by the Michel Perinet Collection in 1973.

In 2009, it was sold at a Christie’s auction for the euro equivalent of over $22.4 million. The chair has curved wooden arms shaped like the tails of dragons, encompassing its brown leather fabric.

Suzanne Talbot was a milliner (hat maker) and fashion house owner. She designed her French couture hats in the early-1900s and was infamous for commissioning and buying luxury custom furniture like this chair. 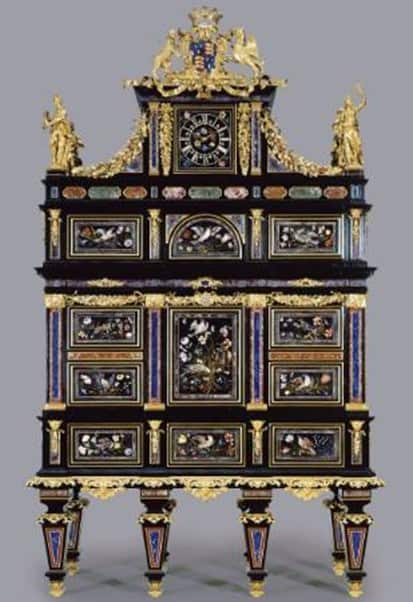 The most expensive furniture is the Badminton Chest. This piece of furniture was commissioned in England by the 3rd Duke of Beaufort, Henry Somerset, back in 1726. The cabinet is made from ebony, with inlays of fine-cut polished stones, colored and gilded.

Its designs include gilded statues, fleur-de-lis, coats of arms, and other designs on its decorous drawers.

When it was auctioned off in 1990, the chest took in 8.58 million euros, making it the most expensive piece of furniture ever sold at the time. It destroyed its own record in December 2004 when it sold at a Christie’s auction in London for $36,662,106.

The chest is named for the country house where it was originally collected, the seat of the Dukes of Beaufort, known as Badminton House. It’s in Gloucestershire, England on 52,000 acres of gorgeous land.