Warhammer traces its roots to the 1970s when Ian Livingstone, John Peake, and Steve Jackson launched a company called Games Workshop in the United Kingdom. The plan was to make hand-crafted game pieces for things like chess and backgammon.

One of the partners created a magazine to promote the business, sending it to retailers with the hope of growing the brand.

Soon after the business launched, Brian Blume asked to have a new American game promoted in the company’s magazine. The game was Dungeons & Dragons, and Games Workshop quickly jumped at the opportunity.

In fact, the trio of business partners loved the game so much that they offered to distribute it in the UK. The new partnership was a huge success, and Games Workshop quickly expanded, selling more games and finding new customers.

By the ‘80s, Games Workshop was developing its own fantasy games, including Warhammer. The title was a success, and new editions were released over time.

Today, Warhammer models (also known as miniatures) have a huge price range. Some sell for a few hundred, while others go for thousands.

Here’s our list of the most expensive Warhammer models ever made! 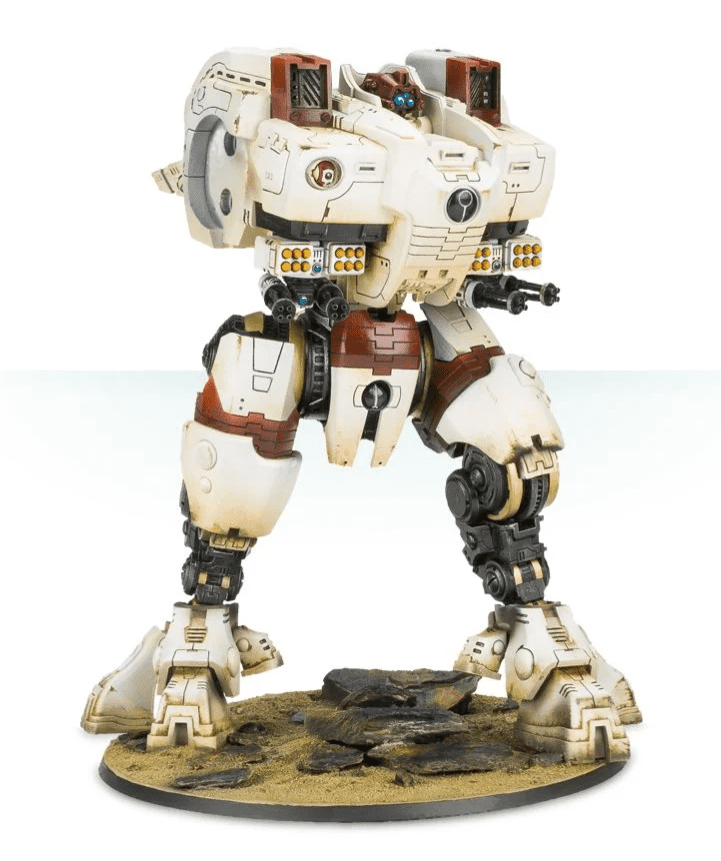 Kicking off our list of the most expensive Warhammer models is this impressive battlesuit. The powerful setup offers extreme long-range weaponry and a design created for static defense.

According to reports, this battlesuit “incorporates smart missile launchers and [a] twin-linked burst cannon that can deal with foes at close quarters, including infantry brave or mad enough to charge at the towering battlesuit.”

At $242, this is the eighth most expensive Warhammer model ever made.

The main weapon of this model is a Pulse Ordnance Multi-Driver with three barrels. It also has Nexus Missile System compatibility and Burst Cannons. 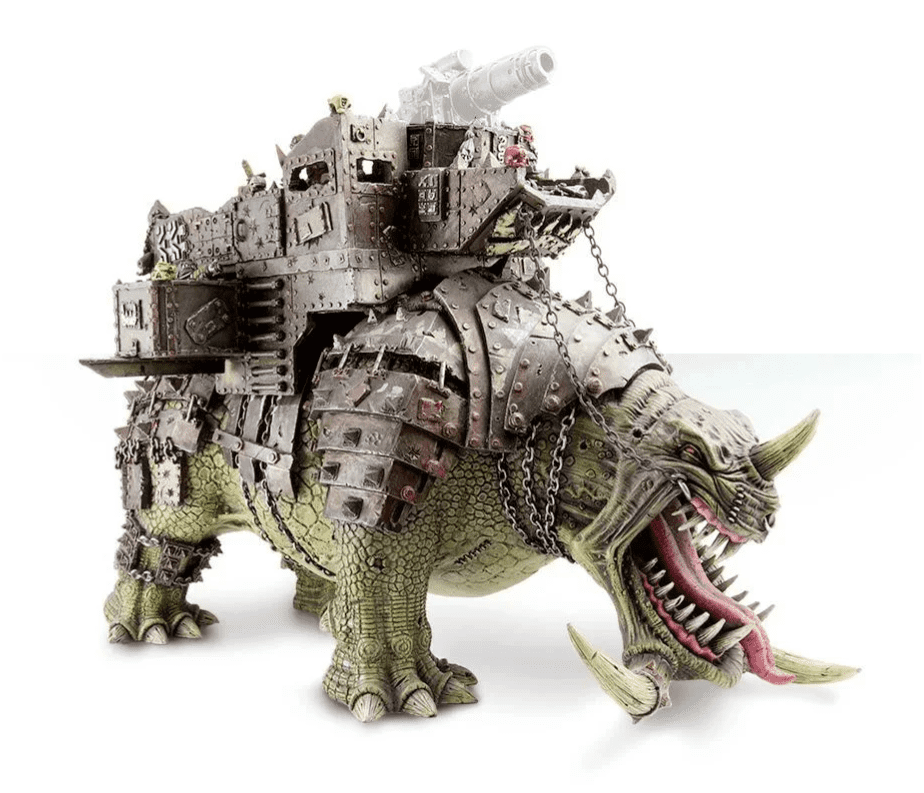 The Ork Gargantuan Squiggoth is known as “one of the more extreme [offshoots] of the Orkoid race.” The beastly creature is packed with armor and weaponry, including intimidating top-mounted weapons on its back and spiked metal along its body.

According to Warhammer lore, “The size of the Squiggoth is determined by the effectiveness of the feed-formula the breeder gives his creature.” A bigger creature can effectively trample enemies as it destroys opponents with its powerful weapons.

Overall, this model costs a jaw-dropping $473. Would you buy one?

These creatures are similar to reptiles, but some adapt to cold environments and become mammoth-like.

Approx. Price: $484
Model Fact: Sellers recommend using Citadel paint while making this model
Warhammer Fact: The wings of this model are tipped with bio-cannons
Model Feature: Flying base for presentation 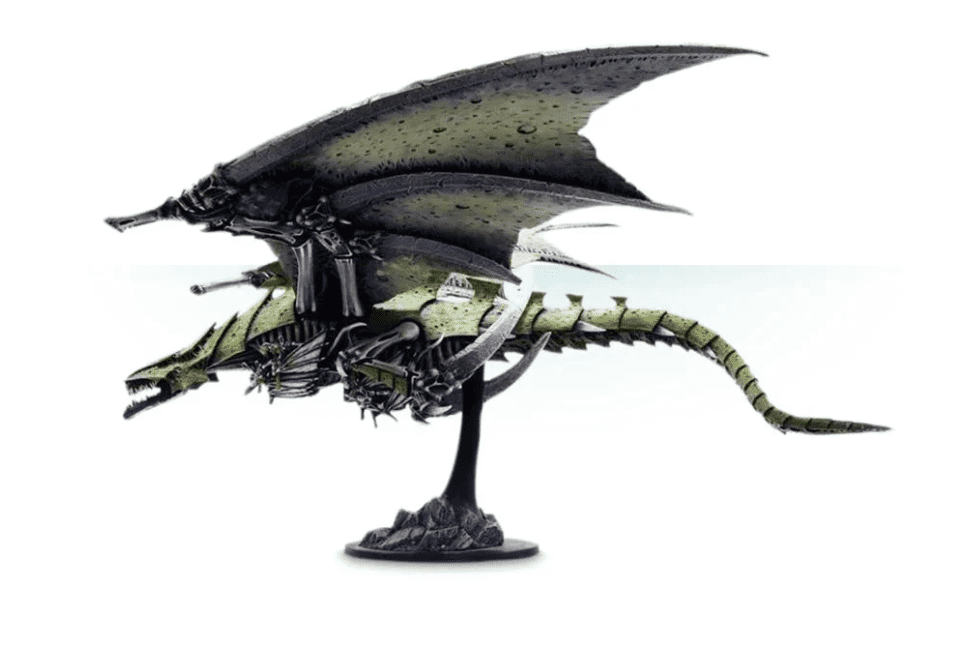 Coming at number six is the threatening Tyranid Harridan. The flying beast features bio-cannons on the tip of each wing, letting it soar over enemies as it fires and attacks with massive talons

The Tyranid Harridan model itself is mounted on a flying base for immersive presentation. Sellers recommend using Citadel paints while assembling the model and suggest the project for fans ages 15 and older.

At more than $400, Tyranid Harridan is one of the priciest Warhammer models you can buy.

This model is made of resin and sells as an unassembled kit that Warhammer fans can put together themselves. 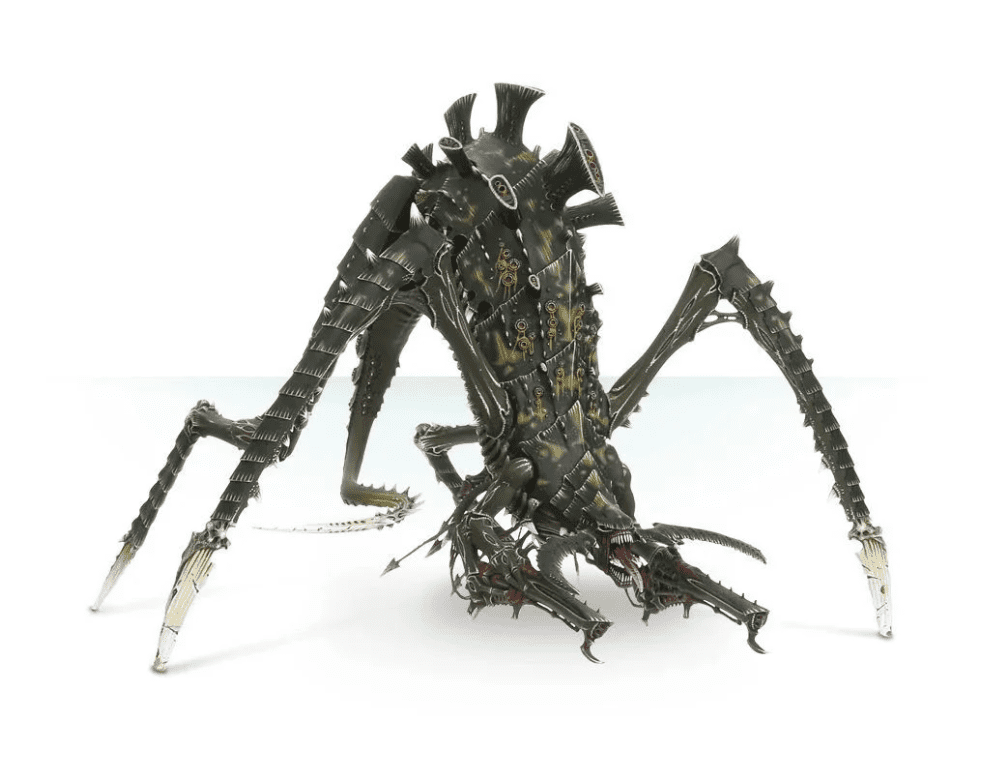 This ferocious Hierophant is known for its insanely intimidating fighting abilities and attacks involving bio-weaponry. The beast dispenses “living ammunition” and bio-plasma that destroys everything in its wake — almost like a venomous spider!

“Hierophants are among the most famous and feared of the Tyranid bio-titans,” says one report, “gargantuan creatures grown and adapted to rival the largest war machines of other species.”

Today, the Tyranid Hierophant Bio-Titan is worth over $480, making it the fifth most expensive Warhammer model on the market. Would you buy one?

The Tyranid Hierophant Bio-Titan is covered in poisonous spores, threatening every nearby enemy and spreading death among opponents.

Approx. Price: $555
Model Fact: This is one of the smallest classes under the Ordinatus umbrella
Warhammer Fact: This was used during the Great Crusade
Model Feature: This model is made of resin 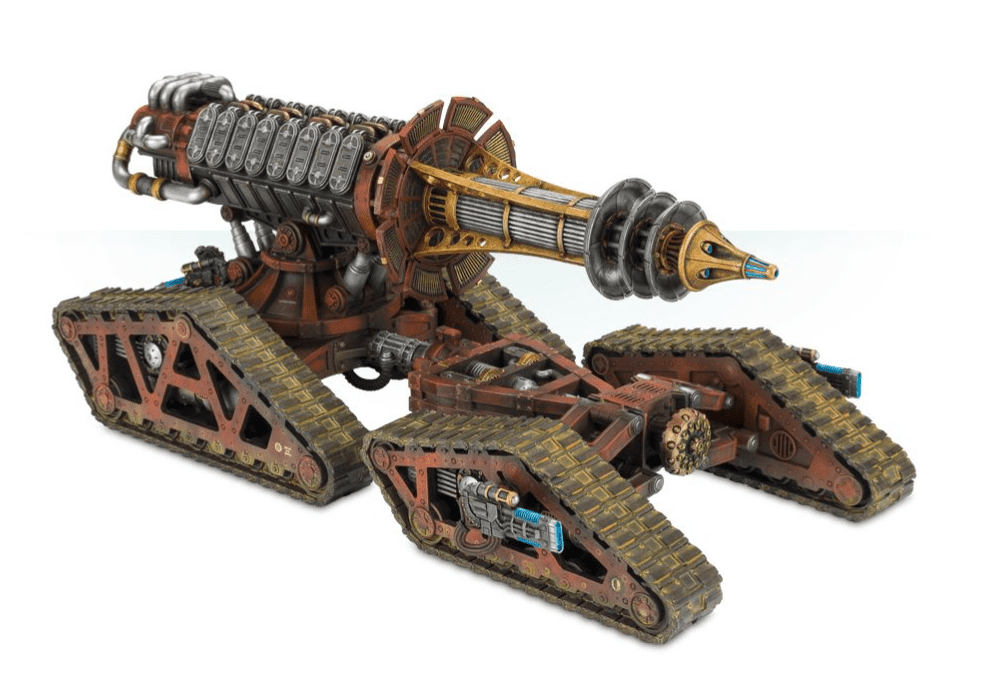 Coming in at number four is the Mechanicum Ordinatus Ulator, a powerful weapon used during the Great Crusade. The mysterious weapon is one of the smaller machines under the Ordinatus umbrella, but it’s a beast on the battlefield nonetheless.

The primary weapon of this model is a powerful Sonic Destructor that’s capable of destroying the most intimidating opponents. Reports call it “A terrifying weapon,” saying the machine can beat heavy tanks.

Approx. Price: $638
Model Fact: This model has some of the most intense firepower of all Knight chassis
Warhammer Fact: This model is made of resin
Model Feature: Twin-linked Magna Lascannon 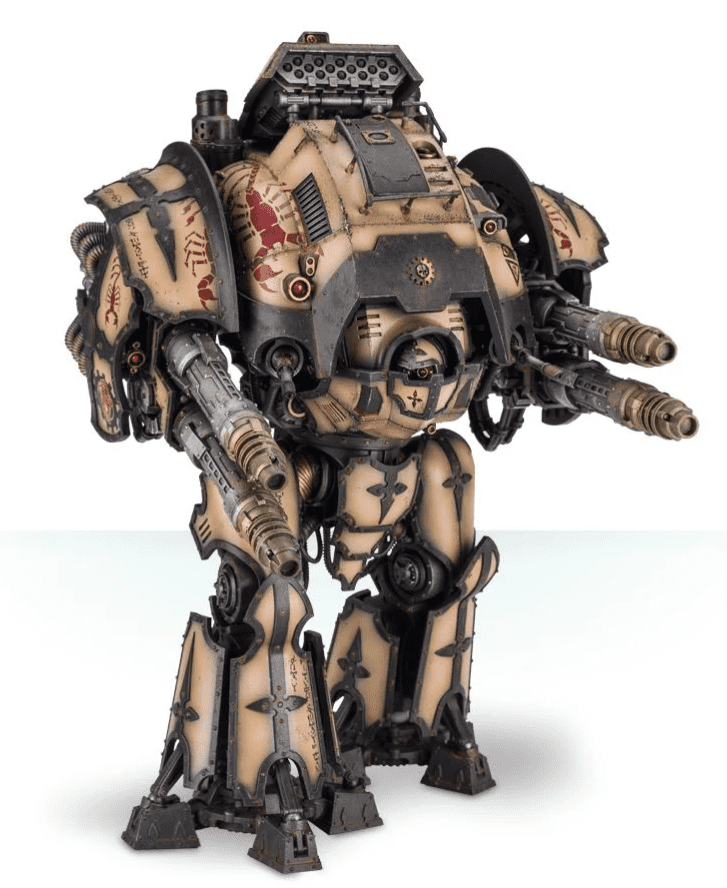 At number three is Acastus Knight Porphyrion, a heavily armed and well-armored beast that can destroy even the best-protected targets.

“Taller than even the towering Cerastus Knights,” says one report, “the Acastus Knight Porphyrion is a dominating presence on the battlefield.” Part of that dominating presence is thanks to the fighter’s impressive twin-linked Magna Lascannon. These weapons are reportedly way more powerful than “the Sollex pattern Heavy Lascannon of the Mechanicum Taghmata.”

This model is impressive, and you’ll have to pay dearly for all that power. At more than $600, Acastus Knight Porphyrion is the third most expensive Warhammer model in the world. Would you buy one?

This model has a variety of optional weapons for secondary use. 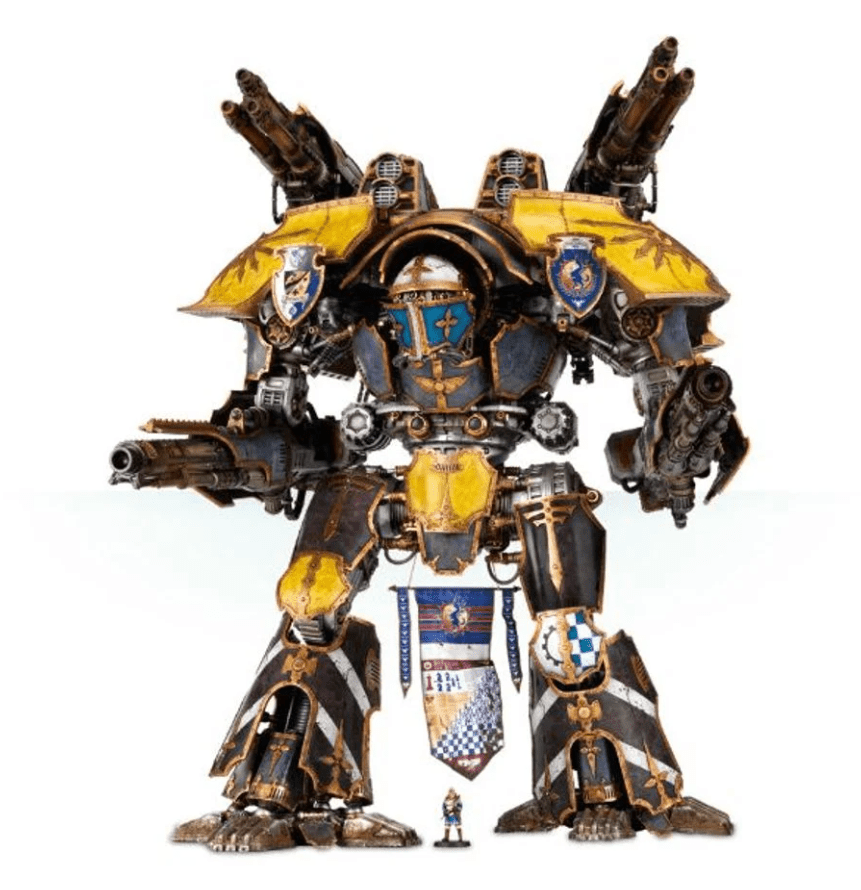 Coming in at number two is one of “the most ancient and feared of the Imperium’s Engines of War.” The large model stands nearly 2 feet tall, making it one of the biggest ever made, and costs a jaw-dropping $2,079. And that’s just the base! Top-end configurations with weaponry systems can cost even more.

According to Warhammer lore, the Warlord Titan is a massive but slow figure on the battlefield. “Due to their immense size, standing nearly 33 [meters] tall, Warlord Titans are not nearly as fast or agile as the Reaver-class Titans.”

Still, the Warlord Titan is a formidable battler: “they more than make up for this failing with their sheer firepower” and durable armor.

Beyond powerful fighting abilities, the Warlord Titan’s cockpit offers strong protection against attacks and harsh environments. In fact, the space can maintain life even on airless moons, making this Battle Titan a strong and versatile fighter.

The Warlord Titan is known for being hard to attack via ground-level assaults.

Approx. Price: $34,882
Model Fact: This Warhammer model is made of metal
Warhammer Fact: This model sold for just $650 when it was first released
Model Feature: Custom paint 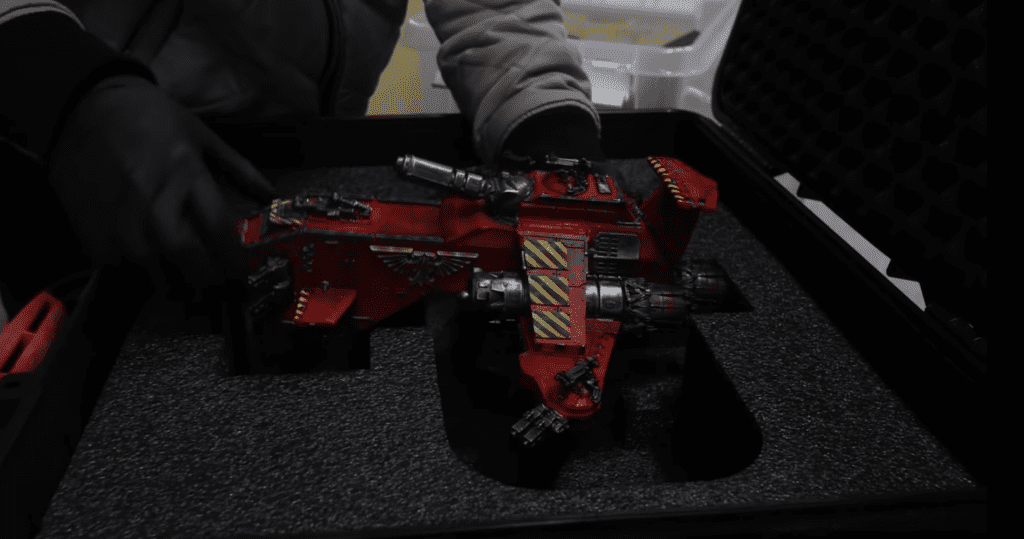 The 1997 Space Marine Thunderhawk Gunship is the most expensive Warhammer model.

This all-metal Warhammer Space Marine Thunderhawk Gunship came out in 1997 and retailed for just $650. That’s a lot of cash, but it’s cheap compared to modern-day prices. Estimates say the model is typically worth about $3,000 — at least most of the time.

In 2021, reports emerged of a rare Thunderhawk selling for more than $30,000. The crazy-high price tag blew other sales out of the water and earned the title of most expensive Warhammer model ever sold.

So why the heck is this model so expensive? It comes down to rarity. The 1997 Space Marine Thunderhawk Gunship is rare in general, but this one is even rarer with a custom paint job and its fully built body. It’s also in excellent condition, making it a great collectible item.

Would you pay 30 grand for a Warhammer model?

Only 500 Thunderhawk Gunships were made in 1997, making them some of the rarest Warhammer models on the planet.