Football is one of the most valuable sports franchises in the world and certainly the most frequently watched in America. The long heritage of collectable football cards begins in 1888 and continues to today where the greatest and most valued players are giving their own immortal collectibles to complement their fame.

Some of the biggest names in football adorn the most valuable cards that money can buy. This list includes both cards that are valued high and those that have sold for record amounts. Continue reading to learn more about the 8 most expensive football cards. 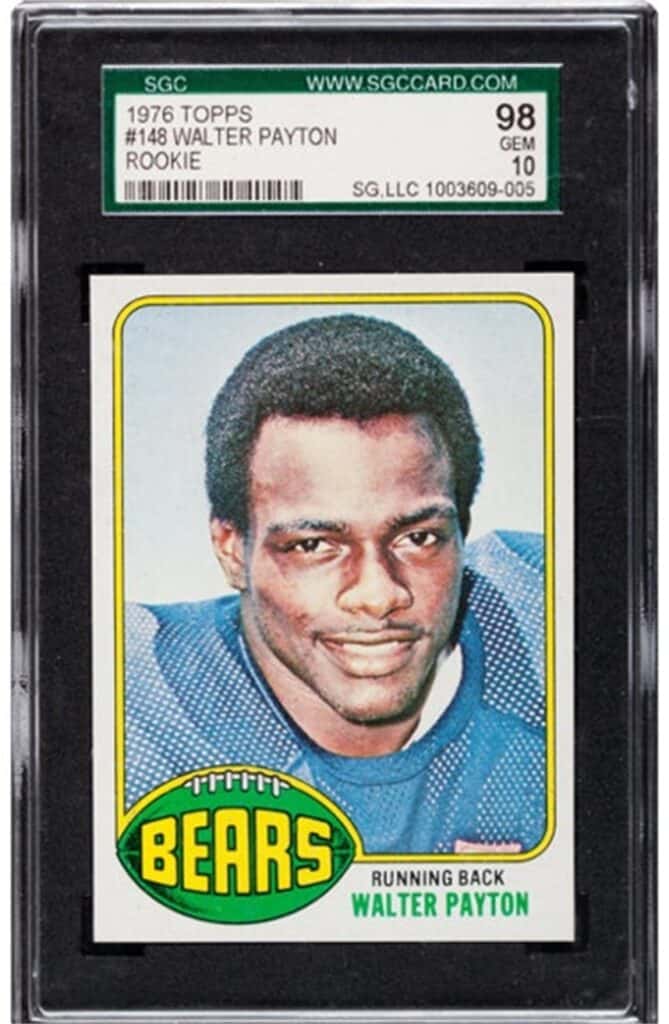 The Topps #148 card featuring Walter Payton is highly valued not only for its rarity and the player’s fame but the card’s incredibly condition. Firstly, the 1976 card is hard to come by. Walter Payton, who has the 2nd place record for the most career rushing yards (only Emmitt Smith has more), is one of the greatest and most coveted names in NFL running backs.

This card was rated a Gold Label 10 by the SGC (Sportscard Guaranty Corporation) and sold for $228,000 in February 2021 at a Heritage Auction.

The stiff arm is a well-known playing strategy for running backs to push defenders back while running the ball. Walter Payton is one of the originators of this method. 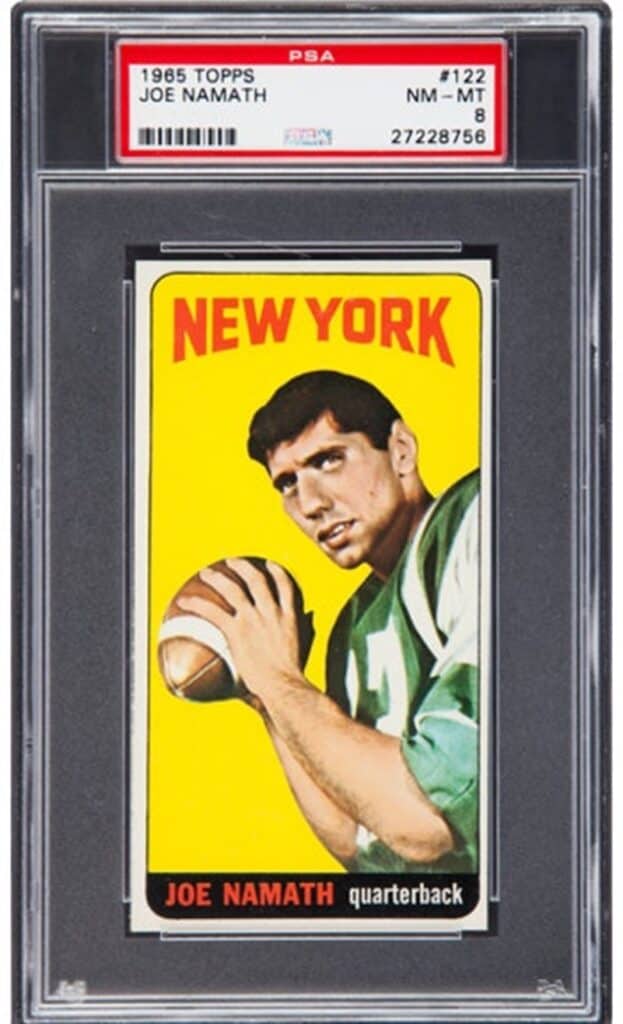 The New York Jets have only won the Super Bowl once. It was Super Bowl III in 1969 and the quarterback was Joe Namath, who is now one of the most widely praised players in NFL history. Of all his cards, the Topps #122 Joe Namath is the most valuable. On PSA, only 1,402 of these cards have ever been graded and only 5 have earned a PSA 9 quality grading. 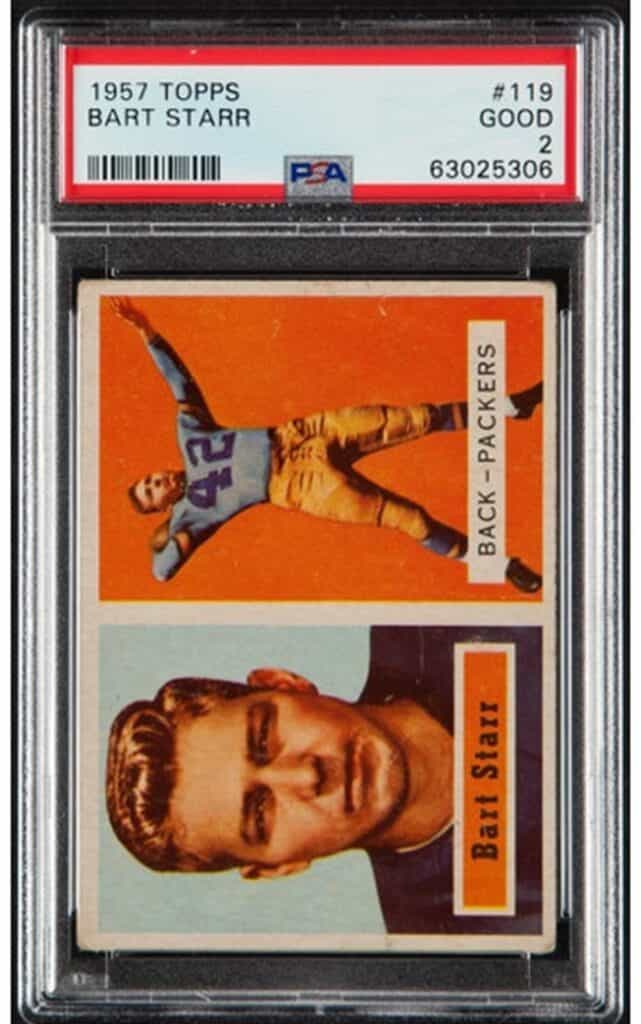 This #119 Topps card is part of a set that features elsewhere on this list as well. As the quarterback for the Green Bay Packers, Bryan Bartlett “Bart” Starr helped them win the first 2 Superbowls. This all but secured himself a spot in the Hall of Fame, which he was given in 1977.

The card was graded PSA 9, which was a huge deal because of its rarity in this condition. Of the 1,710 Bart Starr Topps cards known to exist, only three have ever been graded this high. At a Heritage Auction in February 2017, this card sold for $288,000.

In addition to 2 Super Bowl championships and the MVP for both of them, Bart Starr was NFL champion 5 times, the NFL Most Valuable Player in 1966, and 4 times at the Pro Ball. He also played on the NFL 1960s All-Decade Team. 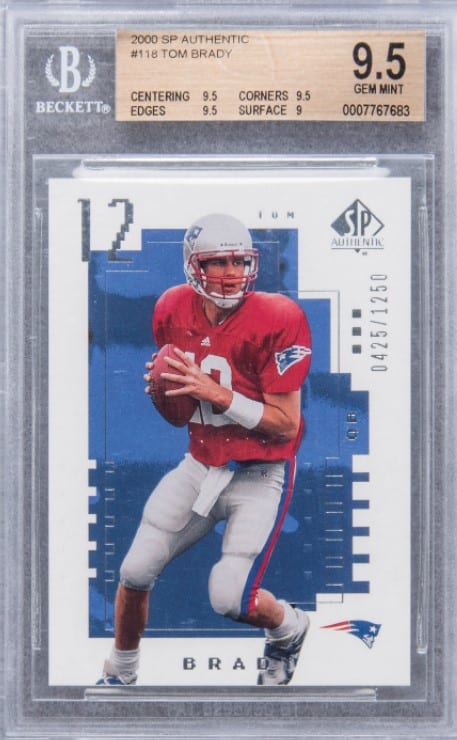 This won’t be the last time Tom Brady appears on this list. Arguably the most famous quarterback in the history of the sport naturally has some of its most highly sought-after trading cards. The #118 card from SP sold at a Goldin Auction in April of 2021 for $312,000.

Today, the world of football knows Tom Brady as potentially the most famous quarterback in the sport’s history and the face of the New England Patriots during their 20-year comeback. In that time, they’ve won 7 Super Bowl Championships with Brady at the helm.

However, he wasn’t always famous. As late as 2000, Brady wasn’t selected until round 6 of the NFL draft, with other quarterbacks beating him out like Giovanni Carmazzi and Chad Pennington. 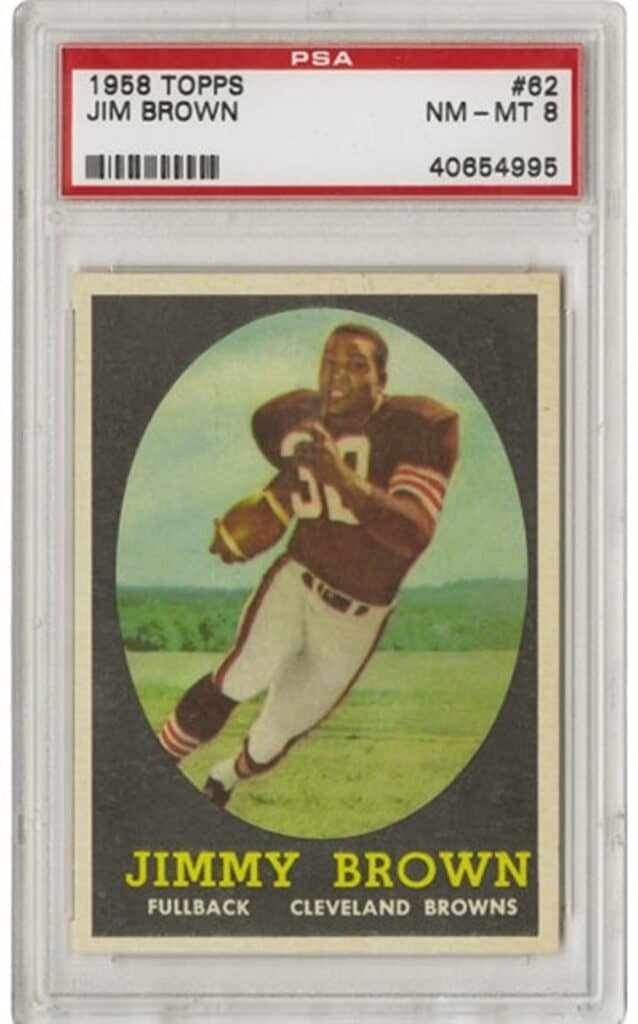 In the world of consecutive powerhouse running backs, Jim Brown is one of the best in the whole sport. He was inducted into the Pro Football Hall of Fame in 1971 for Canton, Ohio. But this Topps football card starts way before that. Card #62 is from 1958 and shows Brown at his absolute prime.

This card, valued at $358,500, is notable as one of the most valuable non-quarterback cards ever made. The one that sold for that price was bought in November 2016 at a Heritage Auction and was graded at a PSA 9 through the popular card grader. Only 5 cards have been graded at that high of a condition.

Brown’s stint with the Cleveland Browns was rife with awards. He was the NFL MVP 3 times, the NFL champion in 1964, the Rookie of the Year in 1957, and on the All-Time Teams for the 50th, 75th, and 100th NFL anniversaries. He had an average of 104.3 rushing yards per game in his career, as well as 106 touchdowns, which was the world record at the time. 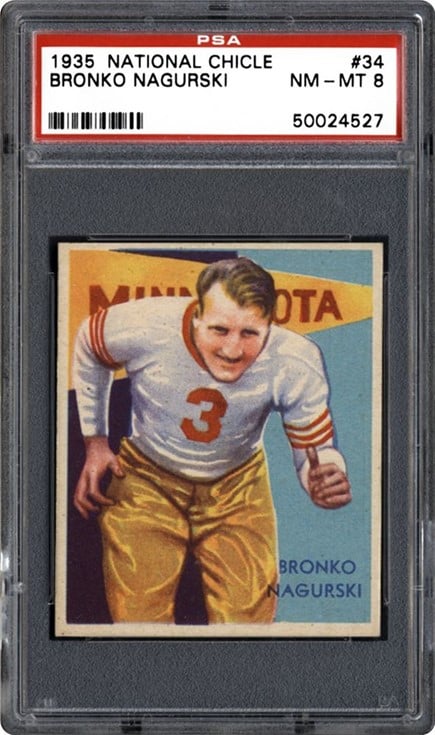 Bronko Nagurski is one of the legendary recognizable superstars in football. This card from 1935 displays the epic runner in his days before he was inducted into the NFL Hall of Fame in 1963. Out of the 36 cards in this vintage set, many are rare. #34 being a card that can sell for $750,000 makes it even more impossible.

Nagurski was a runner for the Chicago Bears for 7 years from 1930 to 1937. He also returned to the team for a short time in 1943. However, the card is so old that it shows him in his All-American days where he played for the University of Minnesota.

Nagurski was a renowned professional wrestler before joining the NFL, known as the World Heavyweight Champion, which he won multiple times. After making football his new home, he managed to become the NFL champion 3 times and 4 times as First-team All-Pro in 1932, 1933, 1934, and 1936. 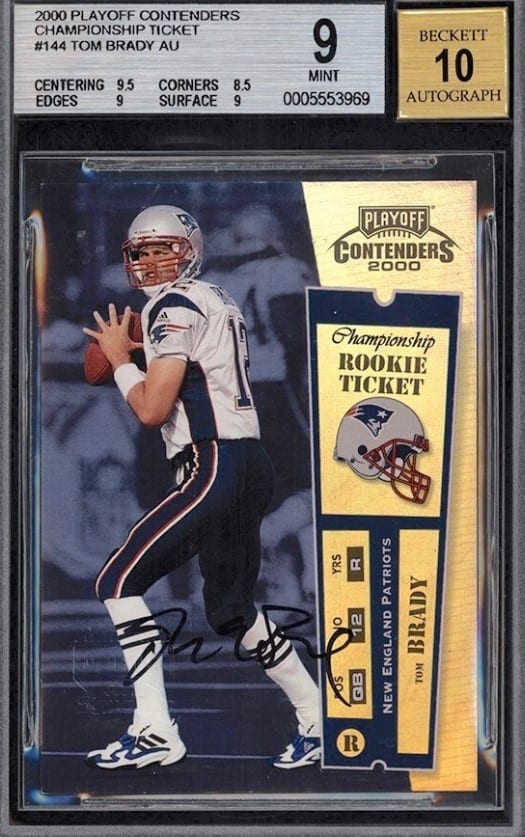 This card, #144, sold at a Lelands Auction in June of 2021 for over $3.1 million, making it the most expensive card ever sold at that point. This Tom Brady Playoff Contenders Championship Ticket card is signed by Brady himself and sold at a condition of BGS 9 for the card and 10 for the autograph.

With 7 Super Bowl rings, Brady is a walking legend in the world of football. This multi-million-dollar card reflects his status in the sport and with his fans.

Tom Brady played the first 20 seasons of what would become a legendary career with the New England Patriots, to which he contributed to one of the winningest periods for any team in the history of the sport. While many consider Brady the greatest quarterback of all time, he only managed to snag the second spot for valuable football cards.

In addition to 7 Super Bowl championships, he also won MVP for the Super Bowl 5 times, 2 NFL Offensive Player of the Year awards, and 14 Pro Bowl trophies. 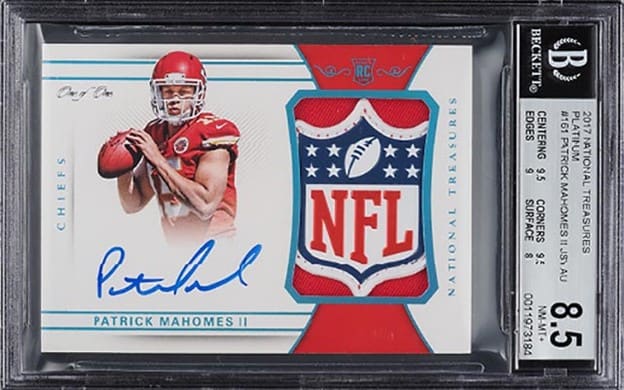 The most expensive football card is the Patrick Mahomes National Treasures Platinum Rookie Card. It came out in 2017 as a one-of-a-kind, signed card from Panini, number 161. It sold for $4.3 million in July, 2021. The BGS card grader ranked the card at 8.5, plus the signature next to the NFL shield.

Despite several turnovers in the last few years concerning the most valuable football cards, this is the current champion. As a unique card, signed by one of the most valuable players in the history of the sport, this Patrick Mahomes Rookie Card sold for $4.3 million in July, 2021 on the PWCC Marketplace.

Patrick Mahomes has been quarterback for the Kansas City Chiefs for a while now. Though he started out in baseball, he’s been taking football by storm since entering the 2017 NFL draft where he was picked tenth.

To match the most valuable football card ever, Mahomes signed a $503-million contract in 2020, which includes a 10-year extension and millions in potential bonuses. This makes it the most valuable contract ever signed in football as well as the second most valuable in sports history, behind only the 4-year contract of Lionel Messi, the captain of Argentina’s national soccer team.

The rarest football cards can cost hundreds of thousands or even millions of dollars when three criteria are met: the player is famous enough, the card is rare enough, and the card’s condition is good enough. If you have recognize any of the cards in this guide, you be sitting on a one-card memorabilia fortune.