Dogs have been man’s best friend for more than 12,000 years.

The furry creatures are likely descendants of wolves that may have lived up to 35,000 years ago, but experts think the first case of a domestic canine occurred a little later: around 27,0000 years ago.

Interestingly, dogs really started to gain popularity just as livestock were domesticated. About 9,000 years ago in the year 7000 BC, animals like cows and goats started being farmed by humans. These humans probably needed help around the farm, so they turned to dogs to keep their herd in place.

Today, dogs are more commonly found in people’s homes than on farms. After so many years alongside humans, canines have developed a lot of variations. Estimates say there are between 195 and 500 dog breeds in the world, so it’s no wonder some breeds get really expensive. 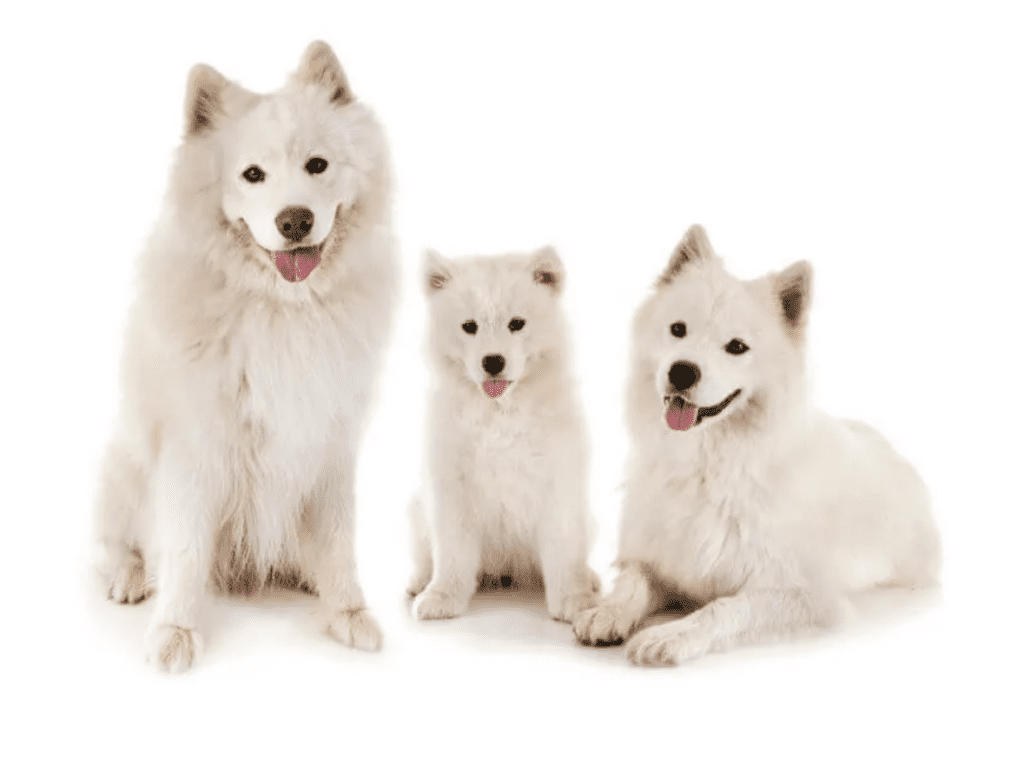 Samoyed dogs are known for being friendly and good with kids. This breed originated in Siberia before they were used to pull sleds in the Arctic around the early 20th century.

This breed tends to be pretty big, weighing up to 65 pounds and growing as big as 23.5 inches tall. Samoyed dogs (sometimes called Sammies) have an average life expectancy of about 13 years.

Samoyed dogs aren’t the most expensive breed up-front, but first-year care costs can make them extremely pricey. According to one estimate, owners might pay more than $5,000 in their first year, partly due to the Sammies’ grooming needs. 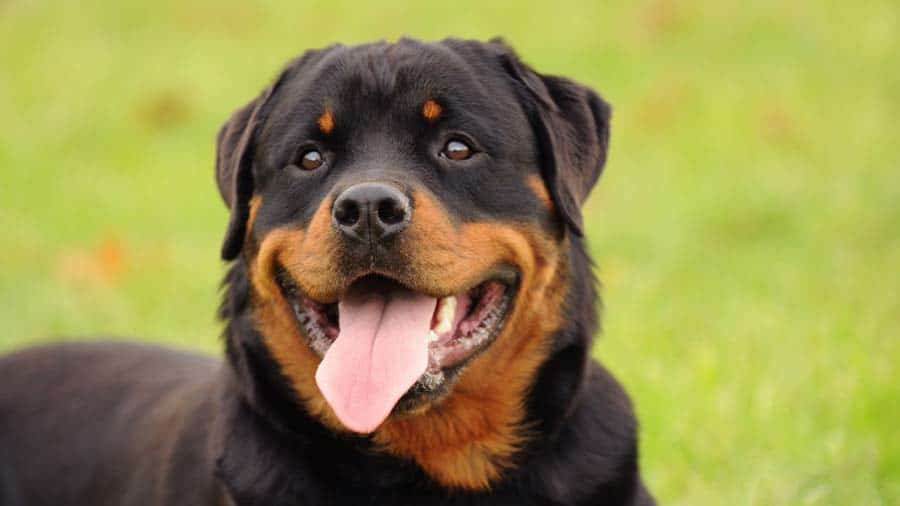 Rottweilers are big dogs from Germany. They’re known for being independent and protective, but they’re also very smart and ready to play. Part of their protective and tough nature comes from their history as traveling companions: In the Middle Ages, this breed would accompany butchers as they transported money from their business dealings.

This breed tends to be pretty low maintenance since they have a short coat. They also make good guard dogs thanks to their protective nature. Because of their robust build and active lifestyle, Rottweilers need a lot of exercise.

Typically, Rottweiler puppies cost about $2,000, but that price can reach as much as $4,000 depending on the breed line and pedigree.

Rottweilers are thought to be descendants of drover dogs (dogs used to manage cattle). 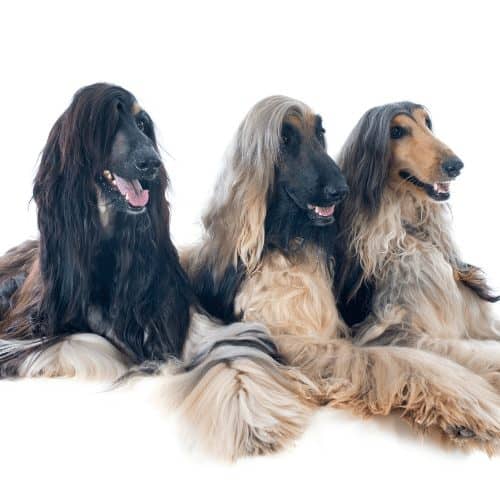 This breed stands out with a long, flowing coat and regal features. As the name suggests, Afghan Hounds come from Afghanistan where they served as hunting dogs.

Afghan Hounds made their way to Europe in the 19th century alongside British soldiers returning home from the Indian-Afghan border wars.

Today, Afghan Hounds can be found across the globe, but that hasn’t stopped their prices from rising. These dogs can cost anywhere from $600 to $2,500 depending on the specific breed line.

Despite their appearance, these dogs can be quite fierce. In fact, Afghan Hounds were historically used to hunt big animals like gazelles and even leopards. 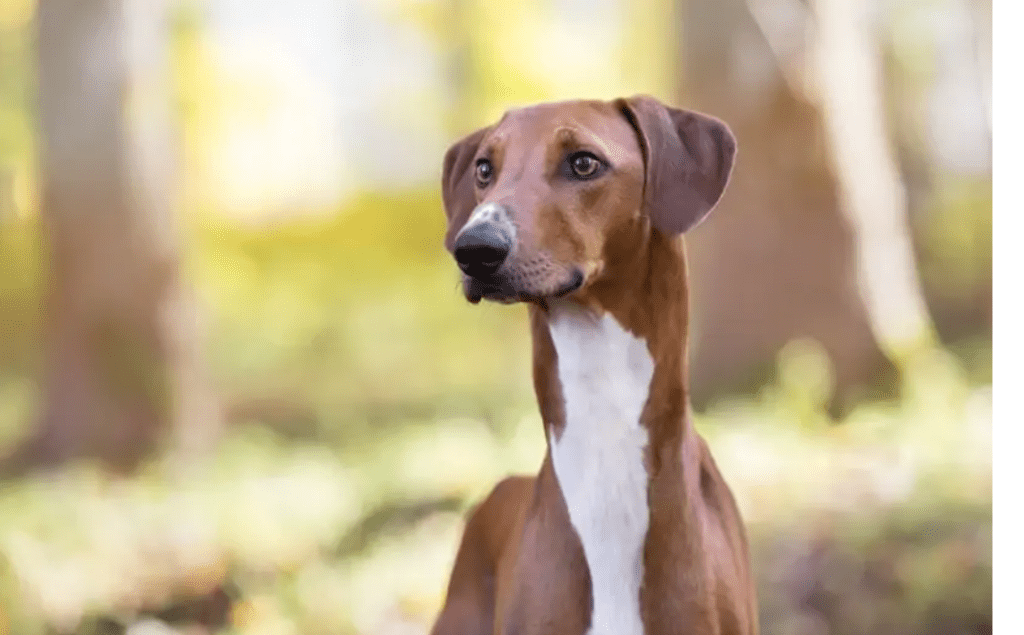 This dog has roots in several West African countries: Burkina Faso, Mali, and Niger. With a short coat, the breed is known for its sleek look and muscular build.

Standing between 23 and 29 inches tall, these dogs were historically used for hunting, but more recently they’ve joined the ranks of Westminster show dogs.

As a relatively rare breed, Azawakh dogs tend to be expensive. According to one report, these dogs can cost more than $3,000, although the average price is around $2,500.

Azawakh dogs can be found in a lot of different colors. While there aren’t reports detailing the exact number of coat variants, the official color standards from the American Kennel Club include 10 variations. 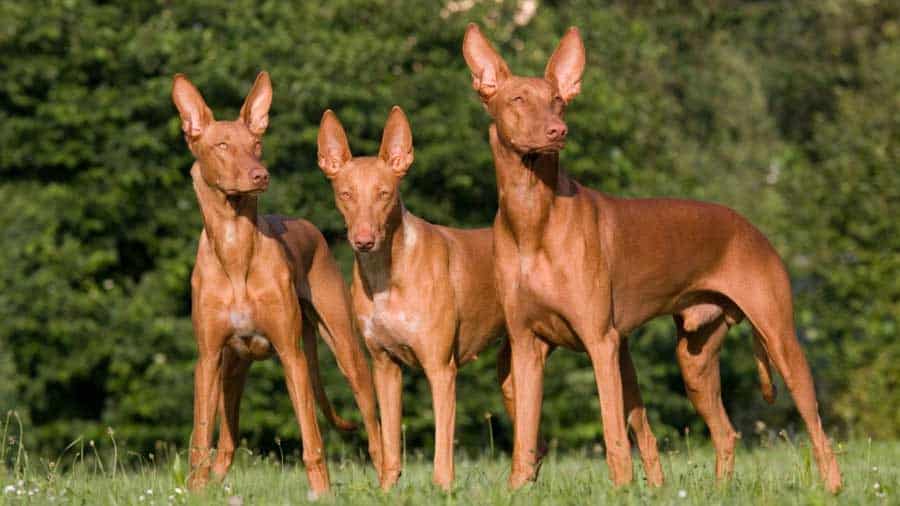 Pharaoh Hounds originated in Malta and stand about 22 inches tall. The active and playful dog is easily recognizable with its slender build and features resembling ancient Egyptian art.

Despite their athletic appearance, these dogs love to cuddle with their owners. They’re also pretty playful with other dogs and generally good with children, making them good family dogs. Interestingly, this breed has been a favorite for thousands of years: One writer from the 10th century even said the breed’s “face glows like a god.”

Today, Pharaoh Hounds are very expensive. One report says these dogs easily sell for $1,800, but that price can jump as high as $2,500.

Pharaoh Hounds are sometimes called the “Blushing Dog” because of their unique ability to blush when excited or happy. 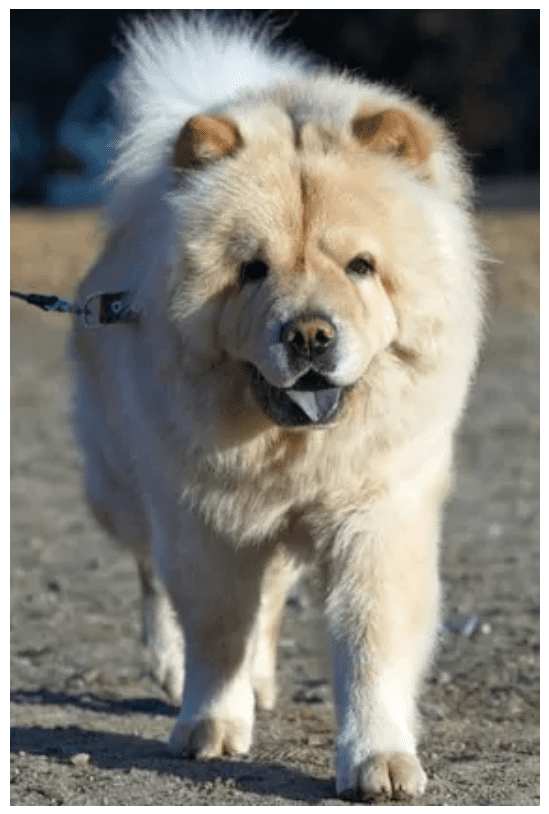 Chow Chows are fluffy and loyal, but they’re also pretty stubborn. The breed came from China during the Han dynasty between 206 BC and 220 AD. That means Chow Chow dogs have a history of more than 2,000 years.

Chow Chow puppies usually sell for several thousand dollars, but that hasn’t stopped them from getting popular. With a calm and affectionate personality, Chow Chows are easy to love and usually good with kids.

Chow Chows make particularly good city dogs thanks to their calm nature and minimal grooming needs. They’re also pretty clean animals, so they tend to be good in small spaces. 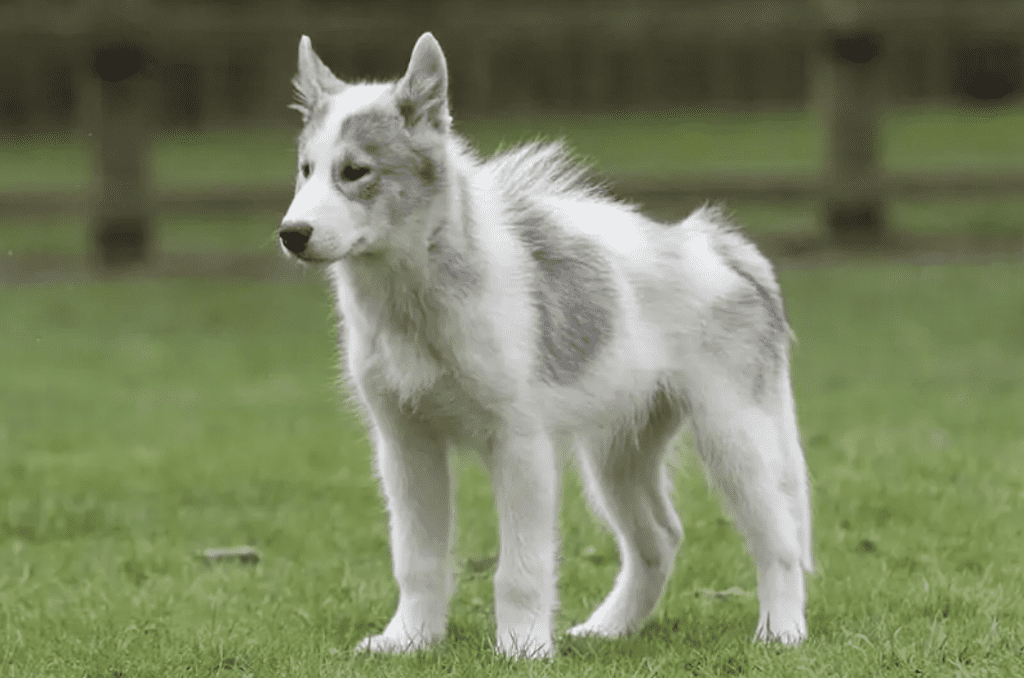 Canadian Eskimo dogs have roots dating back over 4,000 years. Living among the Inuit people of Canada, this breed was typically used for pulling sleds and hunting. Since they’ve lived alongside people for so long, these dogs are very affectionate and loyal.

Despite their safe status today, this breed almost went extinct in the 1960s as the Canadian government reportedly enacted plans to kill the indigenous peoples’ dogs.

Today, these dogs sell for at least $1,500, but that price can easily climb past $3,000 depending on the specific dog.

According to one report, these dogs were airdropped from airplanes during WWII to support rescue missions. 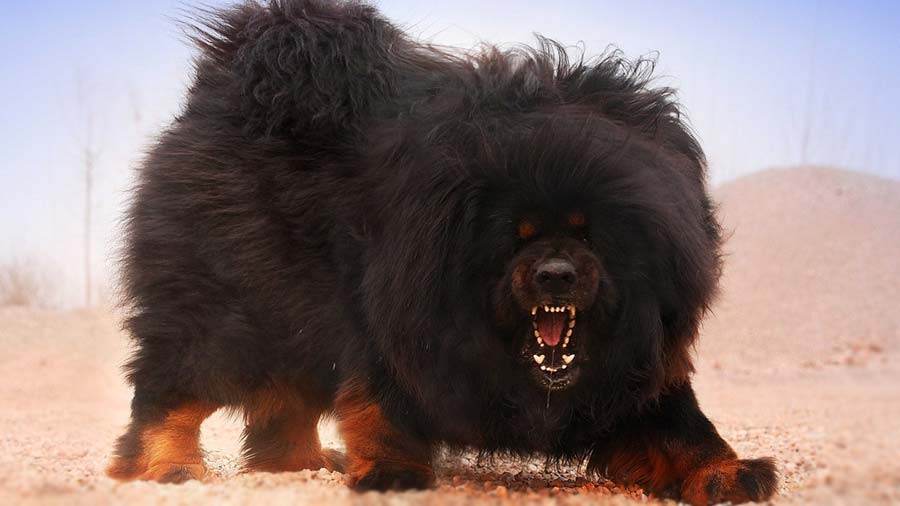 As their fierce appearance suggests, Tibetan Mastiffs are intense dogs with a strong will and a protective nature. The breed comes from China, but it was introduced to the Western world in the mid-1800s when it was brought to the U.K.

Despite being very smart, these dogs can be hard to train since they’re so strong-willed and independent. They generally just want to be left alone, so they’re not great with kids. However, their personality also makes them extremely loyal and protective once they get to know their family.

These dogs are prone to joint problems since they’re so big and heavy. 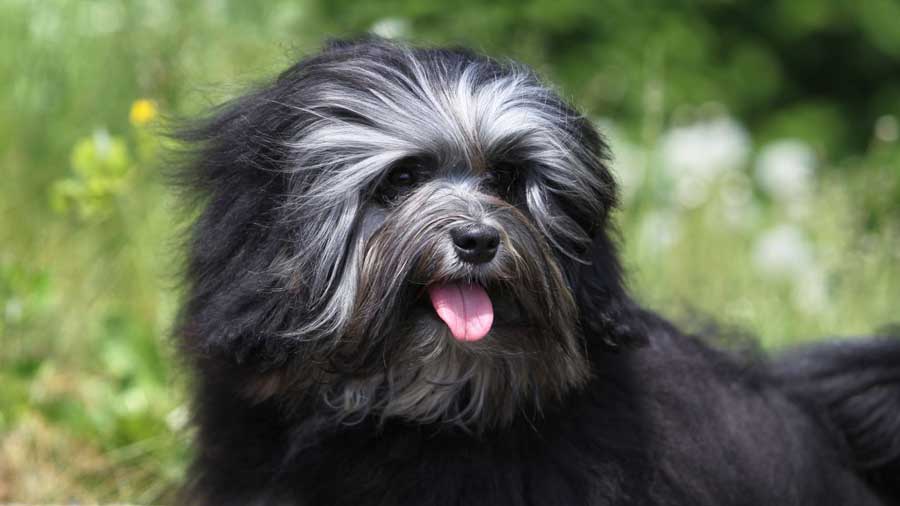 These small dogs are very active and playful. The breed comes from Germany and France, but their name is all German, translating to “little lion.”

Despite their size, Lowchen dogs tend to be quite brave. They’re also good with young children and somewhat calm around other dogs, so they make good family pets.

Modern Lowchen dogs sell for about $4,000, but that price can climb as high as $8,000 depending on the breed line.

These dogs are very rare today, but they almost went extinct in the 20th century. During the 1970s, there were only about 70 Lowchen dogs in the entire world. 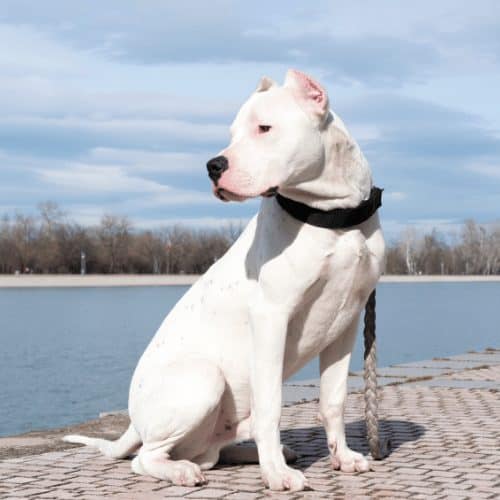 Dogo Argentino is the most expensive dog breed.

With a price tag of about $8,000, these are easily the most expensive dogs in the world. The rare Dogo Argentino is pretty affectionate and playful despite its muscular and intense appearance, but it’s also very protective and watchful.

Beyond this breed’s initial cost, owners can expect to spend $3,000 on first-year costs like vet care.

Interestingly, these dogs were actually bred to be pack hunters for animals like wild boars and even pumas. But that hasn’t stopped modern Dogo Argentinos from being friendly and loving.

These dogs originated in Argentina when Dr. Antonio Nores Martinez created the breed in the late 1920s.