Humans have been weaving animal fibers into fabrics for thousands of years. Today, many of the historically most valuable animal fabrics are endangered or protected, which means they are rare or even illegal to own.

This doesn’t always stop these fabrics from being sold, however. Continue reading to learn about the 9 most expensive fabrics, both those that are legal and illegal to own. 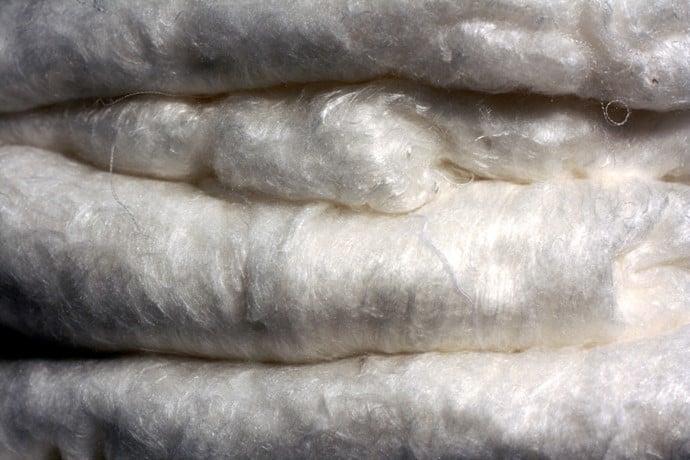 Mulberry silk is often considered the most luxurious silk fabric. It is sourced from silkworms fed on the leaves of the mulberry tree in China, whose cocoons are collected and spun into the raw fiber that becomes mulberry silk. The fibers are pure white and completely uniform compared to wild silks.

Silk sourced from mulberry-fed silkworms is the world’s most natural and genuine since these are the earliest animal fibers used for clothing of any kind, dating back to ancient China. The leaves even impart it with nutrients like protein and amino acids that nourish the hair and skin of those that wear mulberry silk products.

According to ancient legend, a Chinese empress named Si-Ling-Chi first discovered silkworms back in 2640 BCE. According to the story, she was walking in her royal gardens with a cup of hot mulberry tea when a cocoon fell into her cup.

When she picked it out, it unraveled in her hands into a fine fabric, which she ordered to be further investigated for its commercial purposes. 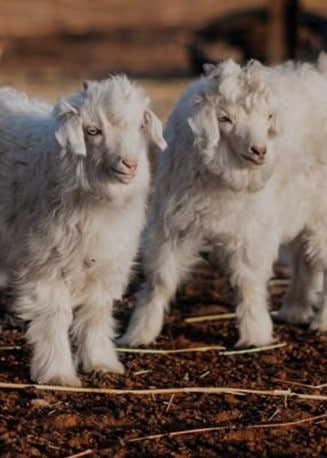 Baby Capra hircus, also known as cashmere goats, can be sourced for baby cashmere (makes sense, right?). Their version of cashmere is even softer, lighter, and fiber-scarce than normal cashmere. The fibers in baby cashmere fur are tapered, resulting in a fine, soft touch. This prevents it from curling.

Not only is baby cashmere softer than regular cashmere, but it becomes even softer over time. To make clothes from this fabric will cost about $175 per yard.

The baby goats sourced for baby cashmere are never older than 6 months. Each kid or baby goat only grows 30 grams of raw wool, compared to 200 grams for adults. These goats live in the desert areas of Inner Mongolia in the harsh climates surrounding the Alashan Mountains. 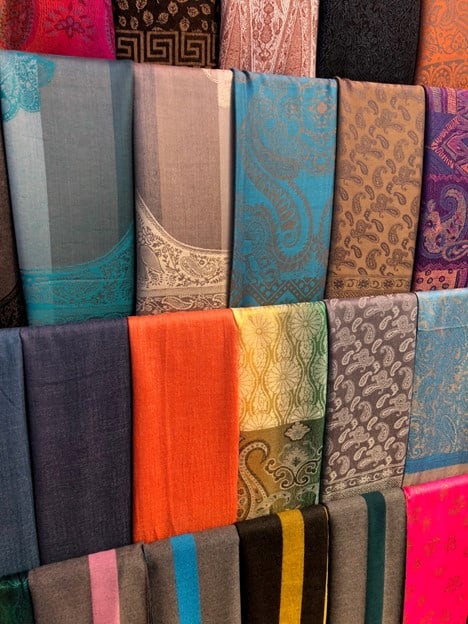 Pashmina is a fabric made from an ultra-fine version of spun cashmere wool, with the animal hairs sourced from a fluffy, downy undercoat of the changthangi goat in India. In fact, “pashm” means “wool” in the Persian language and now refers to both the material and the famous shawls made from it.

Wool quality is measured in fineness by microns. Despite being sourced from the same family of goats, normal cashmere can be as many as 21 microns big while pashmina cannot be more than 16.

Buying pashmina fabric can cost as much as $230 per yard.

Guanaco Wool is well-known as a luxury fabric made from the fur of the Guanaco, a wild camel in mountainous coastal regions in South America like Peru, Argentina, and Chile. The Guanaco is a protected species, now incredibly rare due to a history of being hunted for its wool and meat.

Today, Guanacos are caught and sheered by fiber collectors, who know the right times of year to do so without harming the animals. Unlike the closely related llamas and alpacas, Guanacos are not raised or bred for their wool.

Only about 500,000 Guanacos still exist, so harvesting wool is a protected, regulated process. Buying this valued wool can cost $300 per yard or more. The wool is reddish and double-coated, with a coarse overcoat of thick fur and a soft downy coat beneath.

The Convention on International Trade of Endangered Species regulates the Guanaco wool trade to ensure that it is sustainably collected and safe for the animals. 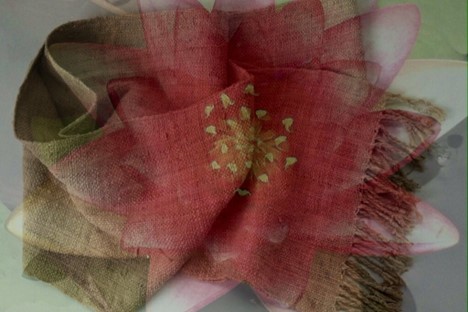 Inle Lake in the Shan State of Myanmar was the birthplace of Burmese lotus flower silk, created by a woman named So Oo from a village called Kyaingkhan. Her first project in the early 1900s was a monastic robe made from pure lotus flowers and stems.

Unlike the recently vitalized lotus flower silk-making, robe-weaving has a long and storied history in Myanmar with competitions in the art dating back through the history of the Tazaungdaing festival. 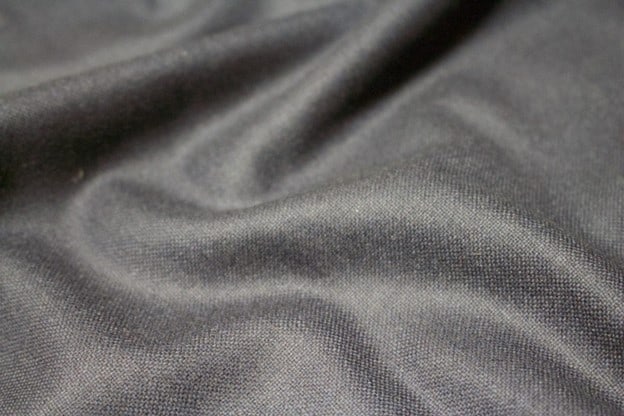 With a diameter of only 13 microns, cervelt is an incredibly fine fabric, finer even than cashmere. Yet it’s even more durable and has a visual curl to it, unlike other downy fibers. Cervelt is made from the fur of a rare New Zealand red deer, making it one of the most exclusive legal fabrics in the world.

Pure fiber viable to be turned into cervelt can only be collected in an amount of about 20 grams from each red deer, whose populations are already strictly controlled. This makes cervelt incredibly rare, purchasable at upwards of $984 or more per yard.

The red deer from which cervelt is made was introduced to New Zealand in 1851, though its fibers are so fine that the process of refining and manufacturing the fur into commercial fabric was not viable until the 2000s. 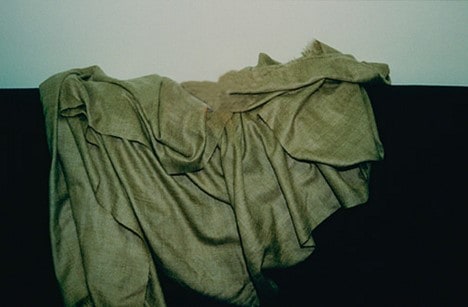 Shahtoosh is a fabric made from the hair of Tibetan antelopes called chiru, which is a protected species. This means that genuine Shahtoosh fabric is illegal to buy, own, or wear, so you probably have never seen it (and probably never will).

If pashmina was all the rage in movie star couture in the late-90s, shahtoosh has been desired for centuries. It was said to have been the fabric of choice of Akbar the Great, the Mughal emperor of the 1500s. If you can somehow buy genuine shahtoosh, which is not legal, you will pay upwards of $1,825 per yard.

The chiru has been endangered since 1975. It’s an indigenous Tibetan antelope whose locks provide the super-soft fabric for fur trappers in Tibet and China, throughout the plateaus there. When the fabric came to the United States in the late-90s, it could cost $15,000 for a simple shawl or scarf made from shahtoosh.

Wealthy people were buying it from the shop windows of New York before the U.S. Fish & Wildlife Service cracked down on it. 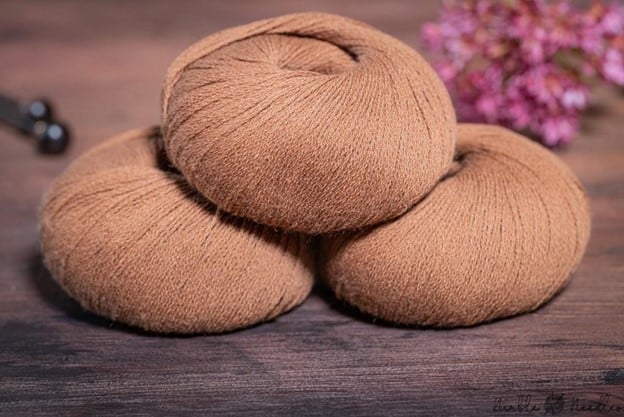 Vicuña is the rarest, most expensive wool in the world, as well as the priciest fabric that you can purchase legally. It is sourced from the vicuña, which is like a small llama native to Peru, specifically in the Andes mountains. Their wool is soft, fine, and incredibly light. Despite this, the wool is well-known for excelling in keeping its wearer warm.

Vicuña wool is frequently turned into sweaters, socks, scarves, coat insulation, blankets, and more. Buying the fabric itself can cost up to $3,900 per yard.

Like llamas and alpaca, vicuña share a common ancestry with the camel. While they are most plentiful in Peru, they can also be found throughout the wet, mountainous regions of South America in Chile, Argentina, Ecuador, Colombia, and Bolivia. 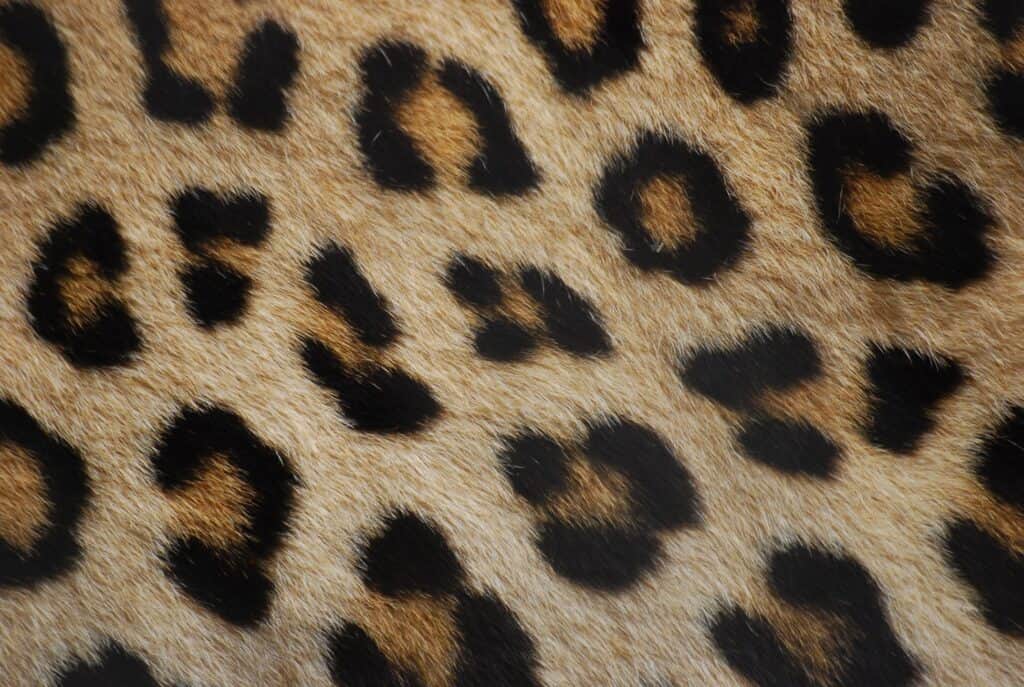 The most expensive fabric is leopard fur. As a fabric sourced from an endangered species, new leopard furs are not legal to trade or sell in most places. The exception is those furs that were made before 1947, which are considered antiques.

Most leopard furs now sold are “faux leopard,” which has a similar texture and appearance to the real thing without the danger to the animals (or at least, to the same animals). No matter what type of leopard fur you try to buy, it will cost $7,300 or more per yard due to its luxurious rarity and quality.

Leopards are very endangered, depending on the type being counted. Most come from Africa and India, though some of the rarest and most beautiful come from further North. The Amur leopard, for instance, is endangered on a level that has left only about 84 examples still alive in their natural habitat – the temperate forests of East Russia.

10 Most Expensive Restaurants in Orlando

10 Most Expensive Bottles of Patrón Tequila