The GIA or Gemological Institute of America provides valuable insight in how these stones are evaluated, so we’ll be siting their findings often.

Continue reading to learn about the most expensive earrings in the world, with special attention to the rare stones that make them so desirable. 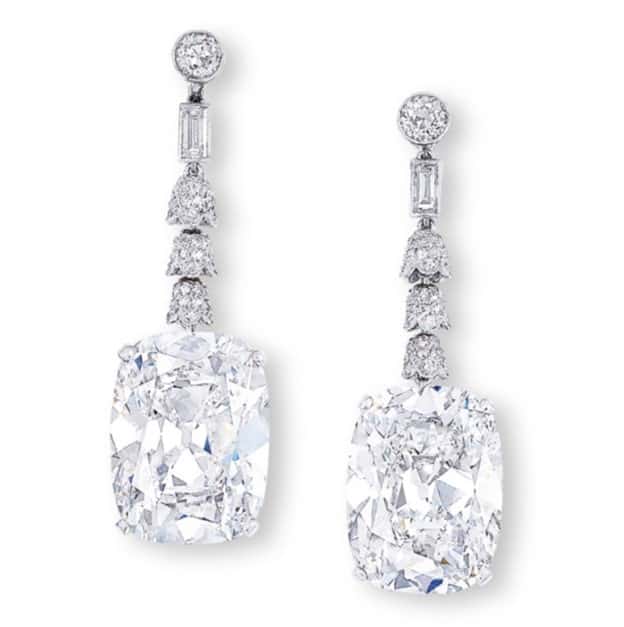 The Imperial Cushions Diamond Ear Pendants sold at a live Christies auction in Hong Kong known as Hong Kong Magnificent Jewels on May 30, 2011.

The cushion-cut diamonds weigh 23.11 and 23.49 carats (46.60 in total), with glittering single-cut diamond links and a surmount made from a baguette diamond. All the stones are fastened to a sculpted platinum mount.

The stones were rated VVS1 for clarity by the GIA, both D color, also known as colorless. The VVS1 clarity indicates that the diamonds show inclusions or flaws only at very careful examination by a skilled jeweler. To most people, especially to the naked eye, these stones present as internally flawless.

The earrings sold for over $9.2 million.

The diamonds in these earrings have been identified as Type IIA, with a cutting style that is not commonly used in gemstones anymore. Both evoke the qualities of the Golconda mines of India, where some of the rarest and most desirable diamonds are sourced. 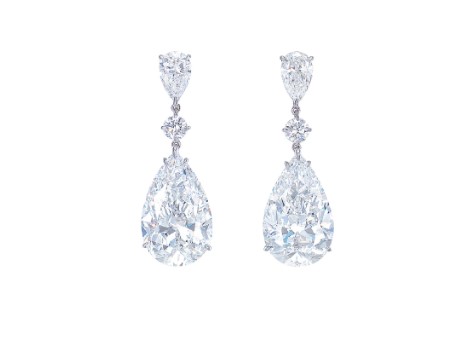 A Magnificent Pair of Diamond Ear Pendants was a listing at a Christies auction in Hong Kong that ended in May 2014. These earrings contain 56.96 carats of stones, broken up over several large diamonds.

The large stones in the centers weigh 25.49 carats and 25.13 carats while the pear-shaped diamonds at the top weigh 2.33 carats and 2.45 carats. Finally, they are connected by brilliant-cut diamonds weighing 0.73 carats and 0.65 carats, with mounts made from 18k white gold.

The stones were rated Type IIA by the GIA, which is the purest and most transparent ranking for clarity they have. These diamonds were originally sourced from India in the Golconda region, which is why these earrings have sometimes been referred to as the Golconda Earrings.

They sold at the auction for the HKD equivalent of over $9.57 million.

There are many world-famous diamonds of Type IIA sourced from Golconda. Perhaps the two most well-known are the huge Cullinan I diamond, which weighs over 530 carats, and the Koh-i-noor, a 105.6-carat stone often used as a royal jewel. 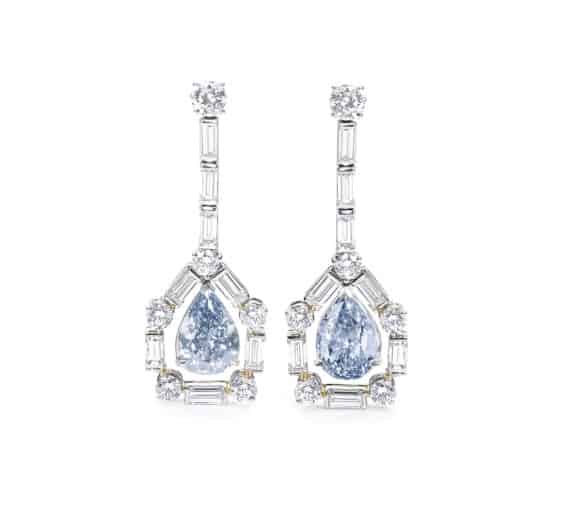 This Rare Pair of Fancy Vivid Blue Diamond Pendant Earrings consists of two incredible pear-shaped stones. One weighs 2.61 carats and the other clocks in at 3.06 for a total of 5.67 carats. Each is a Vivid Blue Diamond of VS2 clarity, according to the GIA.

The mounts of the earrings sport multiple baguette and brilliant-cut diamonds, as well as butterfly fittings. The earrings appeared at a Sotheby’s auction known as Magnificent Jewels and Noble Jewels, lot 570, with a top estimated value of $10,156,125.

The VS clarity is higher than VS2, which contains inclusions, also known as flaws or blemishes, that are easily viewed by a jeweler under 10x magnification. Inclusions that are spotted quickly due to their size cannot rank above VS2 clarity.

5. A Superb Pair of Ruby and Diamond Ear Pendants 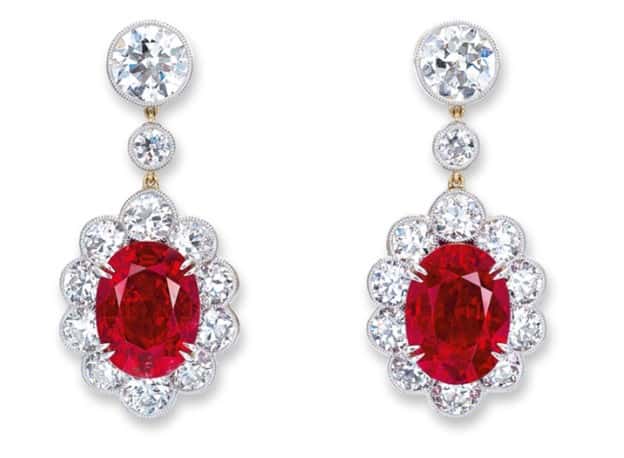 This “Superb Pair of Ruby and Diamond Ear Pendants” does not list the carats of the circular-cut diamonds that surround the center rubies, of which there appear to be ten. There are also connecting diamonds and stones in the studs. The designation of 19.11 carats is specifically for the two rubies in the center, which are oval-shaped, both Burmese in origin.

The SSEF or Swiss Gemological Institute rated the rubies as being unheated with a Vivid Red color designated as “pigeon blood.” This comes from a combination of trace elements that give true Burmese rubies their vibrant hue.

Burma or Myanmar is known as the location of the world’s most valuable rubies. Pigeon blood rubies like the ones in these earrings are the most prized. Another famous example is the platinum ring on display in the Smithsonian in Washington D.C., which contains a 23.1-carat pigeon blood ruby unearth in the 1930s. 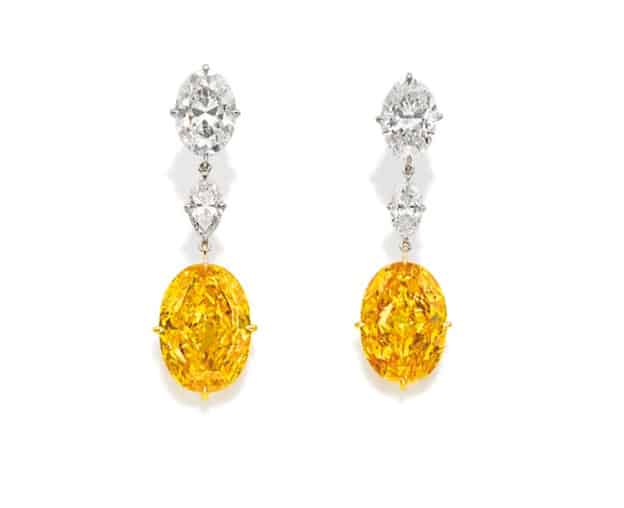 The earrings known as the Oriental Sunrise do not have a specific brand attached to them. However, they were highly prized items at a May 17, 2016 auction, known as the “Geneva Magnificent Jewels” sale. The earrings contained six diamonds in total of various weights and colors.

The two main diamonds were Fancy Vivid Orange-Yellow in color, rated VVS2 for clarity by the GIA for the bigger one (12.2 carats) and VS1 clarity for the smaller one (11.96 carats).

3. A Pair of Colored Diamond and Diamond Ear Pendants 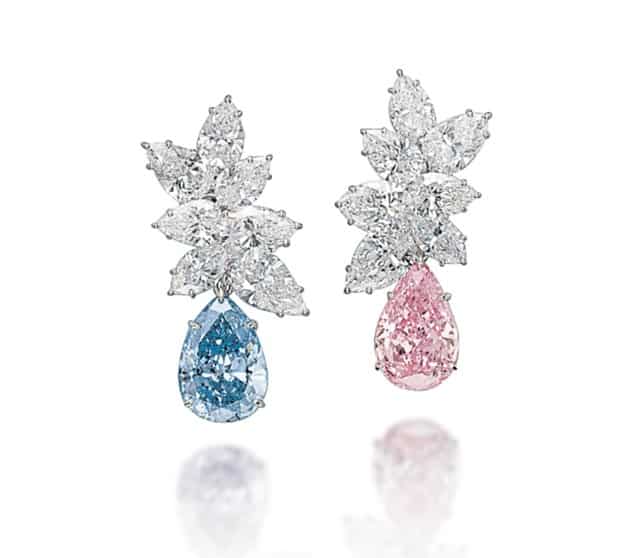 The earrings listed as A Pair of Colored Diamond and Diamond Ear Pendants were made by Bulgari. These beauties contain a total of 19.28 carats. One diamond is a fancy vivid blue and the other a fancy vivid pink. These weight 6.95 and 6.97 carats respectively while the rest of the carats are in complimentary stones lining the pendent.

The mounting of the earrings is made from platinum and gold. The GIA certified these diamonds as the Fancy color designation, S12 clarity for the blue, Type IIB, and VS2 clarity for the pink, Type IIA. All 14 stones were examined multiple times from 1994 to 2005 to verify their quality.

“Fancy vivid” is the designation given to the most intense colored diamonds, which are considered the rarest. The pure pinks are the most popular and valuable, but reds and blues are also highly prized. 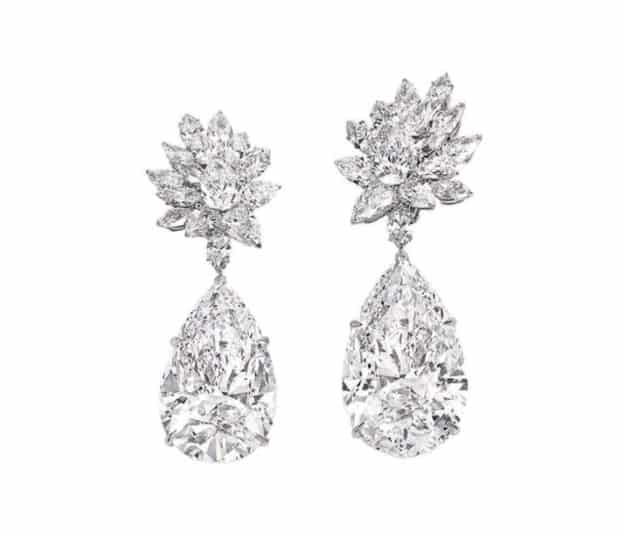 The Miroir De L’Amour Diamond Earrings, which translates from French to “Mirror of Love,” were signed by Boehmer et Bassenge in Paris before crossing the auction block of Christies in November 2016. These diamond earrings are huge, with one diamond weighing 52.55 carats and the other 50.47 carats, totaling 102.97 carats hanging from the ears of one lucky lady.

The main diamonds are rated D color, flawless clarity by the GIA, both Type IIA. The earrings sold for 17.5675 million Swedish Francs, or the equivalent of $17,987,318.

Type IIA diamonds have no impurities caused by trace amounts of nitrogen and boron. They are what’s known as “chemically pure,” meaning they usually have no color (though they can be light gray or yellow) and make up only 1-2% of all natural diamonds. 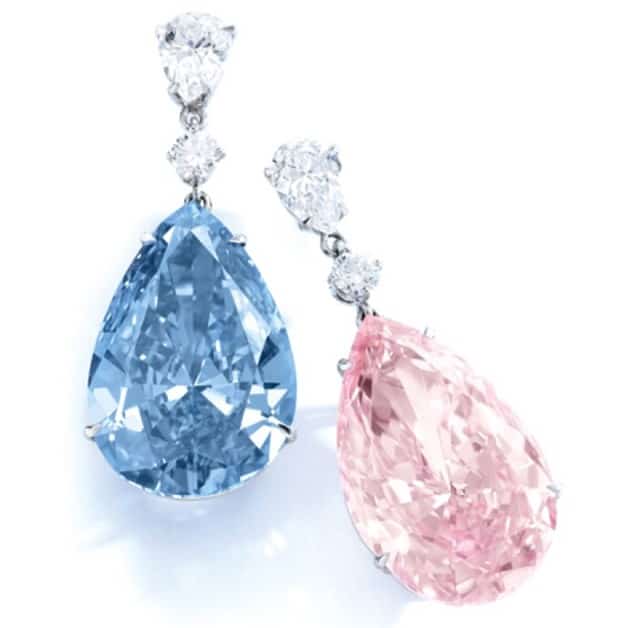 The most expensive earrings are the Apollo Blue and Artemis Pink Diamond Earrings. These godlike earrings were sold separately at the same auction but bought as a pair for their obvious thematic connection.

However, either one of them could have topped this list, with the Flawless Fancy Vivid Blue diamond alone estimated to be worth $38 million – $50 million.

Together, they took in $57.4 million at a Geneva Sotheby’s auction in May of 2017, known as Magnificent Jewels and Noble Jewels. The blue diamond was Internally Flawless, Type IIB, which is why it was worth more than the pink one, which despite being nearly 1.5 carats larger scored a lower clarity of VVS2 (Type IIA).

Both diamonds are cut into complimentary pear shapes, named for two Roman deities to emphasize the sheer godlike rarity of these incredible stones.