Bob Ross was an instructor, painter, host, and army veteran who used his love of Alaska and low-key speaking to bring his personality to the world. His show, The Joy of Painting, where he showcased his work by teaching the audience how to do it themselves, ran from 1983 to 1994.

However, his international stardom did not come until after he died, when the rise of Twitch and YouTube brought new attention to his show, along with new standards of programming that welcomed his relaxing vibe. While most of Bob Ross’s 30,000+ paintings are not available for purchase, some have trickled into circulation.

Continue reading to learn about the 9 most expensive Bob Ross paintings that you can buy. 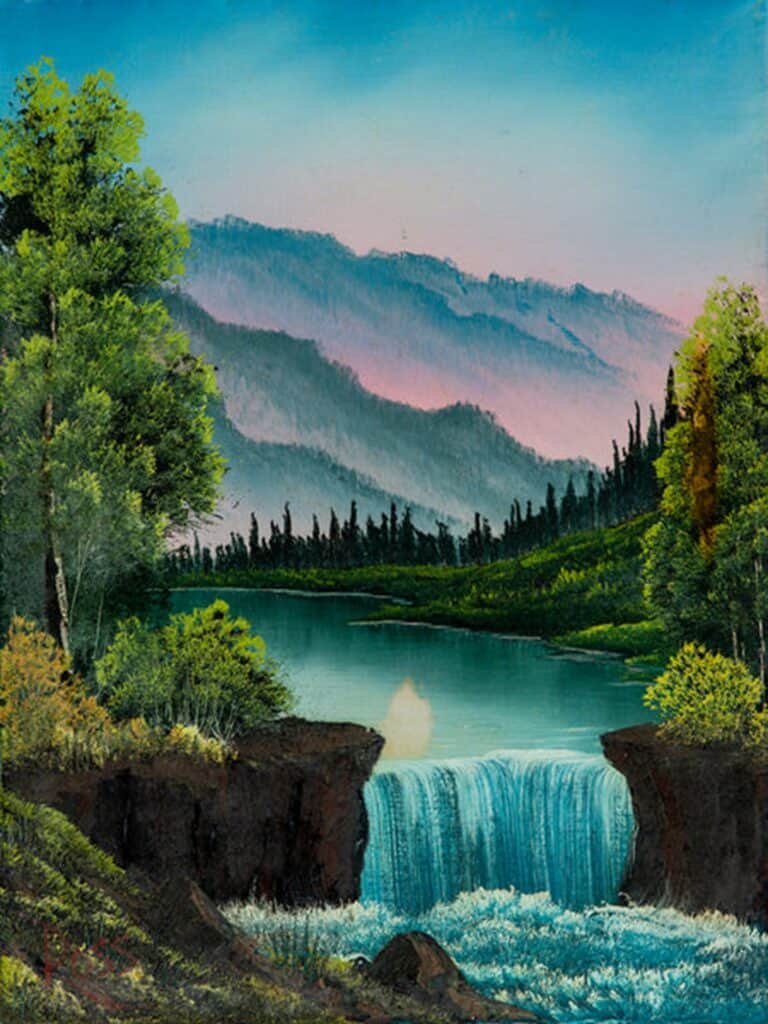 The painting known as Mountain Waterfall appeared on The Joy of Painting twice, once in Season 2 (Episode 12) and once again in Season 5 (Episode 1).

The painting was actually done around 1980 in oil and is one of Bob Ross’s more unique paintings, sporting a canvas that is 24” x 18” in dimensions, selling for $14,959 online.

You may notice that this makes the painting taller than it is long, which is rare for his work. Being one of his few vertical paintings, Mountain Waterfall takes advantage of its height by travelling up the waterfall of a mountain stream, past trees in the foreground, and fading off in the distance with pink and blue mountain ranges.

Paintings with a vertical orientation like this one tend to be paintings of human subjects, especially portraits, while horizontally oriented paintings tend to be environmental in nature. This is true in Bob Ross’s work as well, though this painting is an exception. 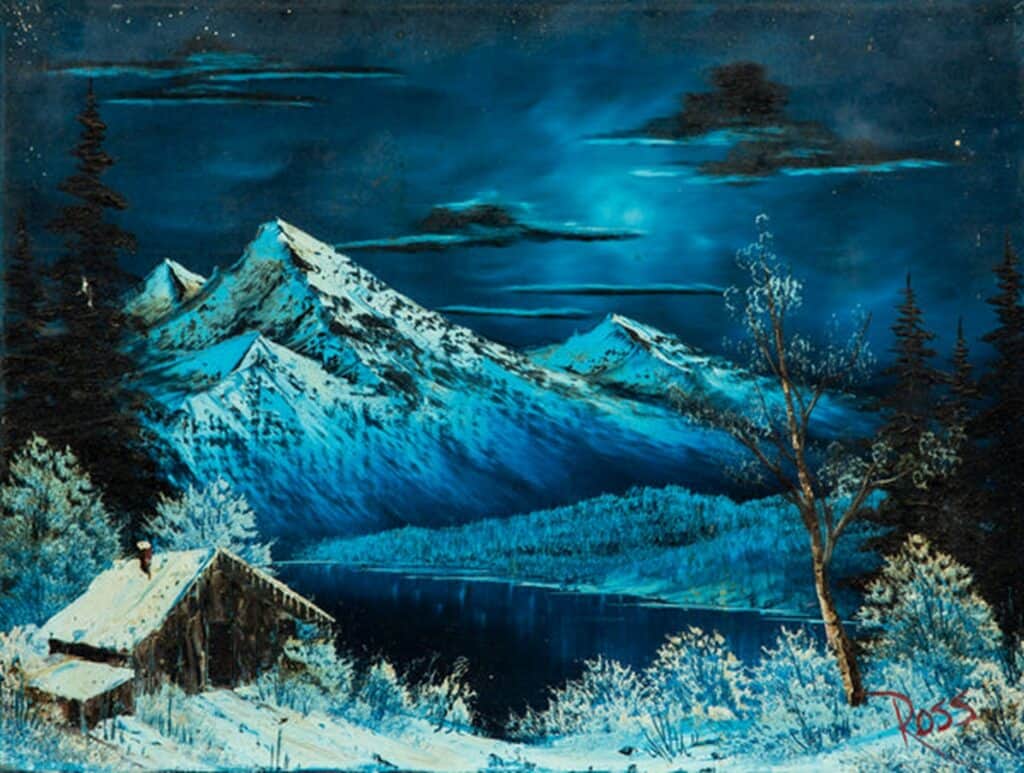 Winter Moon is an oil painting painted that he made on The Joy of Painting, all the way back in Season 1. Episode 6, which aired in 1983, featured this 18” x 24” canvas, which has many of Ross’s signature features. These include snow-covered mountains, sparse trees, a snow-covered cabin, and a dark blue night sky.

Though there aren’t many man-made structures throughout Bob Ross’s work, Alaskan cabins, the kind that he became accustomed to in the army, make numerous appearances. Winter Moon is a prevalent example of this provincial Alaska obsession.

There are many private and public use cabins in Alaska, of which this painting may be one. Public use cabins feature single heating sources like an open stove, bunks, a table, and an outhouse but often little else. 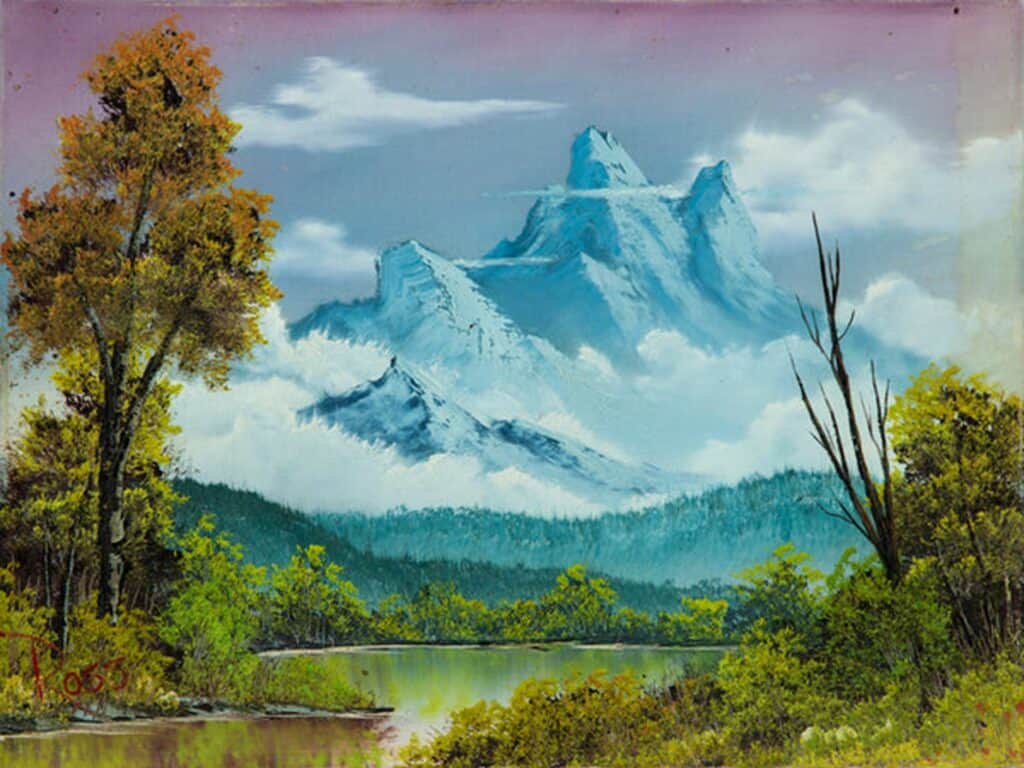 Towering Peaks is a signed original painting by Bob Ross done around 1980. The painting was then showcased on season 10, episode 1 of The Joy of Painting.

Like most of Ross’s works, the painting is 18” x 24” and in good condition except for some water damage on the right side, which has caused a little fading on that side.

The trees in the foreground of this painting are much more detailed than Ross’s typical “happy trees” and evoke a more specific, neo-realistic style. Arguably one of Ross’s most detailed environmental paintings, Towering Peaks sold online for $17,950.

Neorealism in painting rejects the work of impressionists and post-impressionists, who favored decorative details over natural forms. Ross may not be famous as a neorealist, but his love of nature definitely leads him in that direction. 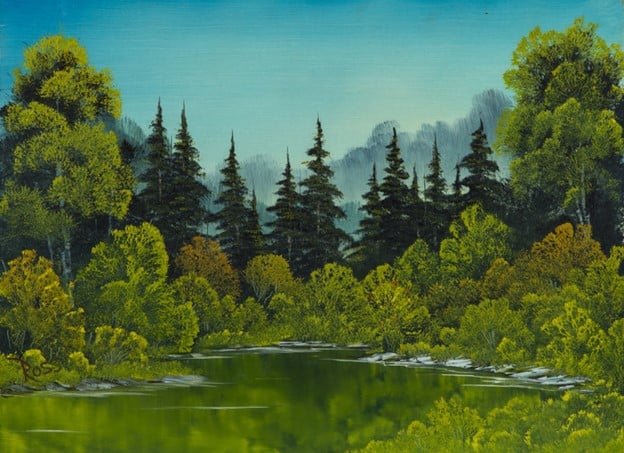 The 18” x 24” Bob Ross painting known as Meadow Lake was done in 1982, just a year before he started to paint on television in The Joy of Painting. 1982 is just an estimate, in fact, made by Bob Ross Inc. after examining the painting. It was sold on Artsy for $18,950, a price made even more impressive by the fact that the painting didn’t come with a frame.

Meadow Lake is one of the many paintings that Bob Ross made inspired by his 20-year stint in the US Air Force, where he was stationed mostly in Alaska. In 1981, he retired from service to go after a career in painting, meaning this was one of his first paintings done after that time. 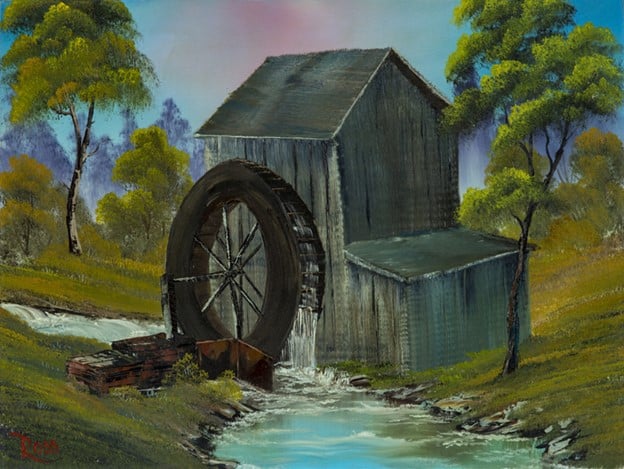 The mill itself is not one of Ross’s most complex structures, but it demonstrates his straight-line technique for blocking out wood surfaces.

The painting was sold on Artsy for $19,500, making it one of the most expensive Ross paintings around.

The MORE is a museum in the Netherlands, which was the first to exhibit a solo gallery of Bob Ross’s work. This included 40 paintings that eventually made their way to permanent display in the Smithsonian National Museum of American history. 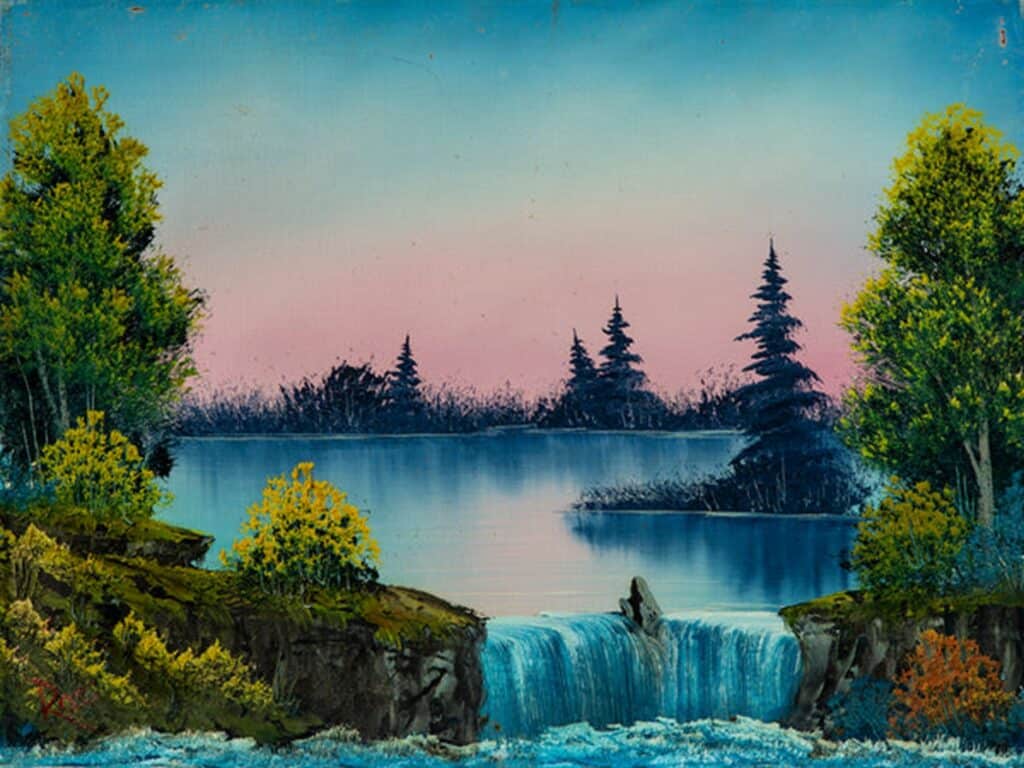 Misty Waterfall is an oil painting done around 1980, which dates it before he started painting on television. It’s an 18” x 24” canvas that is listed on Modern Artifact with the condition of “museum quality,” complete with a certificate of authenticity.

The painting may not have been done on television, but the image reappeared on The Joy of Painting, season 7, episode 6. In this version, the palette is more contrasted, with a pinker sunset and darker trees surrounding the reflective surface of the water.

The painting was sold for $19,950 and is now in its anonymous buyer’s private collection.

Bob Ross is estimated to have painted some 30,000 paintings in his life, so it’s only natural that themes and images would repeat eventually, as they did in Misty Waterfall. 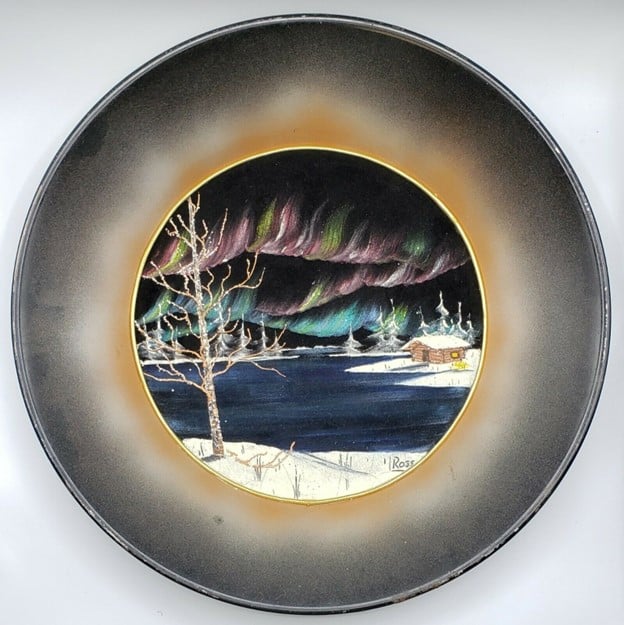 This painting is unique in that it’s a painted velvet surface on top of a novelty mining pan, a replica of what prospectors would have used to mine for gold in Alaska. The painted surface in total measures 10.5” and includes both Ross’s wet-on-wet painting techniques as well as hand-glittered accents.

The scene of this painting includes a snowy cabin amidst an Alaskan landscape beneath the famous Northern Lights. The pan has been certified as authentic and unique, the only such artwork that Bob Ross ever made. It can be bought on eBay for $69,000.

It is also the oldest painting on this list, dated to around 1971, well before he started painting in the public eye.

The painted souvenir pan was gifted to its current owners by Bob Ross and authenticated by Annette Kowalski, who was Ross’s business partner and helped him get into television. 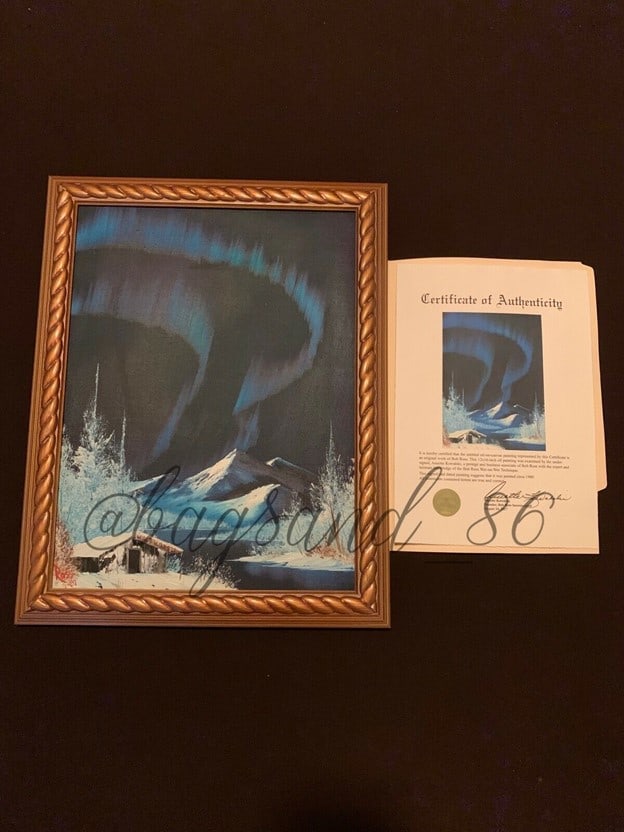 The painting listed as “Oil Painting Original Signed 12×16 1980” on eBay is a Bob Ross work done in 1980. According to the seller, they bought this painting along with four others in 2018. The painting depicts the Northern Lights at night, shining in a winter landscape complete with mountains, skeletal frozen trees, an icy lake, and a snow-covered cabin in the foreground.

When painting light, the painter has to consider not only direct light, where an object is lightest, and shadow, which is where it’s darkest, but also how light from the lighter surfaces reflects on objects around it.

1. Row Boat on the Beach 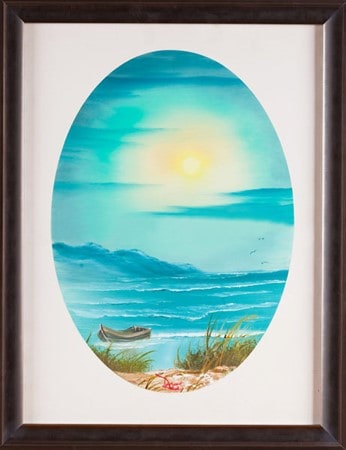 The most expensive Bob Ross painting is Row Boat on the Beach. The unframed dimensions of the painting are 24” x 18”, making it another of Ross’s rare vertically oriented works. The painting was done in oil on canvas and features a row boat padding to shore on a sunny day with reeds and sand visible in the foreground.

This painting, featured in Season 24, Episode 10 of The Joy of Painting, allowed Bob to spend special attention to the way the sunlight illuminates the clouds and how to stipple the edge of the waves of the tides to get that white foam.

This painting sold on Modern Artifact for $95,000, making it the most expensive Bob Ross original currently out there.

You may recognize Season 24 of the show as also containing Portrait of Winter, another famous Ross painting. He paid special attention to the “gesture” of the seascape in this painting, helping viewers understand how paint reflects light to give it that luminous, late afternoon feel.

8 Rarest Types of Lizards in the World