Cigars have been around for at least 1,000 years. A painted Mayan pot dating to the 10th century shows a man using what archaeologists believe may be an early cigar. These people may have wrapped tobacco in plantain leaves or small palm fronds and smoked them.

However it started, ever since Christopher Columbus “discovered” tobacco and brought it back to Spain, it’s been a sign of class and regality in the whole developed world. Cigars and Spain have been linked ever since.

Most cigars worth smoking cost a pretty penny. But these are the ones that cost more than any in the world. Keep reading to learn about the 9 most expensive cigars on earth., 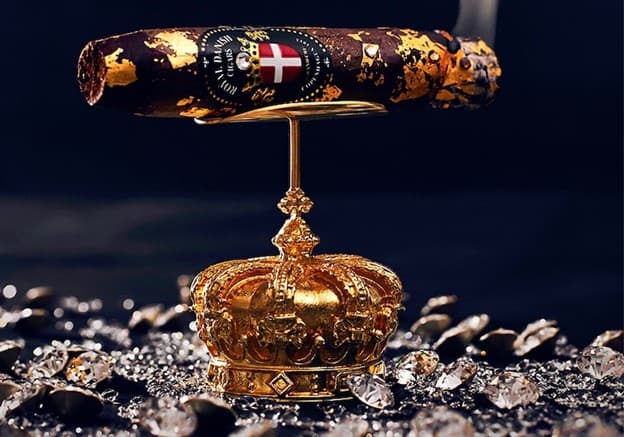 The King of Denmark Cigars by Royal Danish Cigars are each 9 inches long. Their main draw is that they can be personalized for each buyer who dares to pay $4,500 per cigar. This is just the starting price. Buyers can increase their value by adding gold foil to the wrapper personally inscribed with their name, as well as studding the cigar with diamonds and precious metals.

Some of the cigars on this list will be complimented by extravagant, limited-edition humidors that increase their value even further. In the case of King of Denmark cigars, the humidors come with a sculpted sterling silver crown plated in 24-karat gold that can be used as individual cigar holders. The humidor and crown will cost the buyer an additional $8,500. 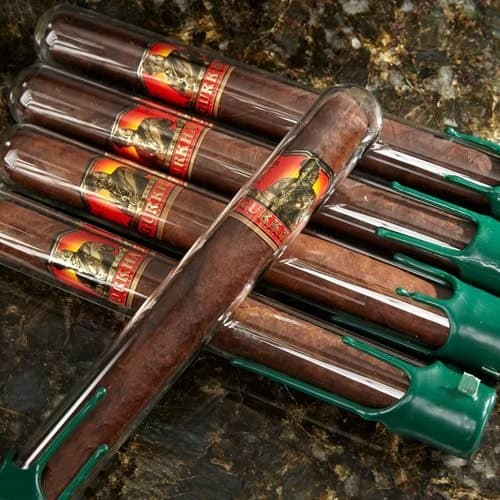 The 18-year-old tobacco that Gurkha crafted into their luxury cigar line, His Majesty’s Reserve, has a crazy full-bodied flavor. Those rich enough to have tried one, which cost $750 a pop or $14,750 per box, report that it has a deep flavor on the exhale similar to dark chocolate. Another undertone is a sweet nuttiness from the Louis XIII Cognac that the leaves are steeped in.

Each year, Gurkha makes 100 boxes of His Majesty’s Reserve, tops, so their rarity (and reputation) has only grown since they debuted.

The delicious tobacco of these Gurkha cigars is cloaked in rare Connecticut Maduro wrappers. The binder is rare, aged Dominican material, aged for up to 12 years before being classy enough to adorn His Majesty’s Reserve. 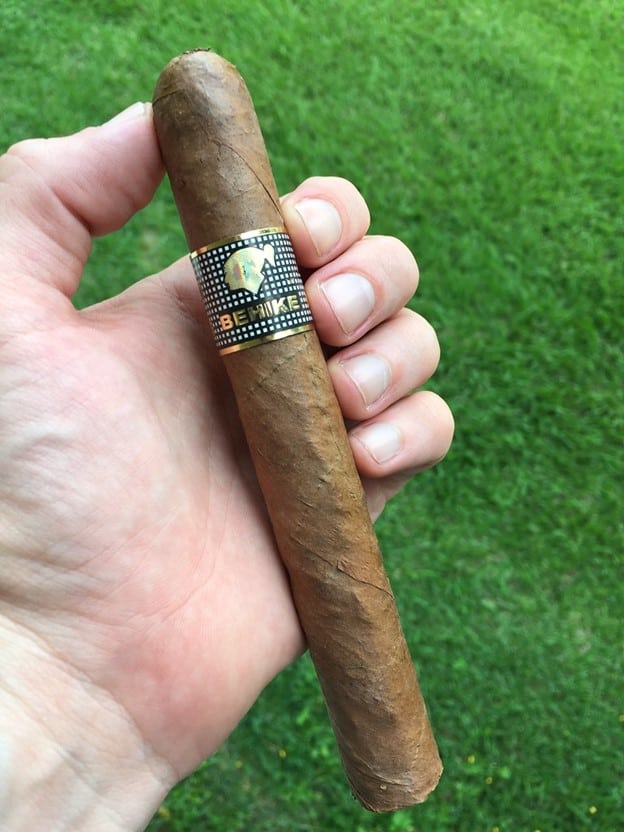 The company’s artisan cigar rolling expert Norma Fernandez Sastre made every Cohiba Behike cigar on the market, which has been limited to 4,000 units.

The humidors on the Cohiba Behike cigars are luxurious and part of the cost. They are made from fish skin, ebony, and bone, designed by Elie Bleu, the French manufacturer of luxury humidors, jewelry boxes, and other wooden accessories. 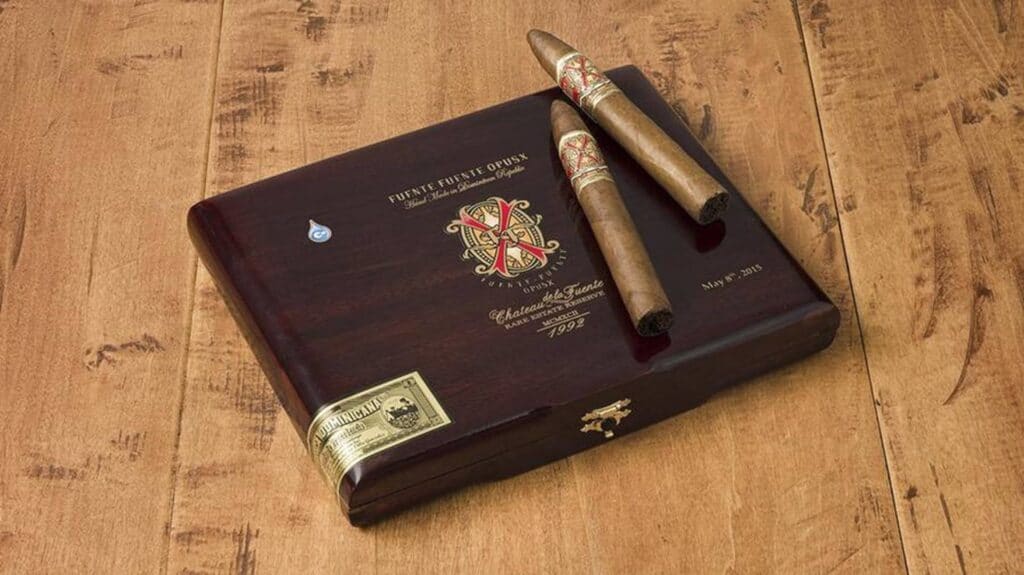 The Arturo Fuente Tobacco Company produced limited edition cigars in 2003 to commemorate the Opus X, one of their original cigars. Each box contains 20 of these incredible cigars, which each has a bold blend and a dark, oily wrapping.

But the real attraction for the Opus X cigars is the humidors, which were produced in a limited edition of 100, which includes 50 red madrona veneers, 40 in yellow eye maple, and 10 macassar veneers.

Before OpusX got its modern name, it was called ProjectX, a reference to Ed Wood’s schlock sci-fi disasterpiece, Plan 9 From Outer Space. He changed the name to make it sound sexier. 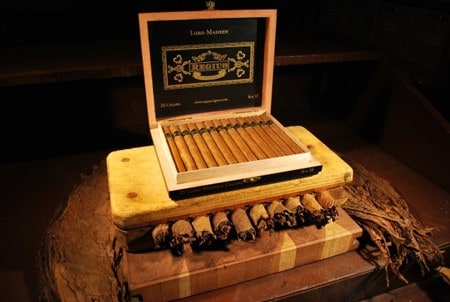 Many of the entries on this list reflect the cost of an entire box of cigars. However, a single Double Corona Regius Cigar was sold in 2013 to Callum Jones, a businessman and ambitiously luxurious smoker, for 54,000 big ones.

Technically, this medium-bodied premium cigar can be bought by anyone in three luxury cigar shops – one in New York at Nat Sherman on 5th Ave, one in Hong Kong at Mandarin Oriental, and one at the Davidoff in London.

This cigar’s price involves a little smoke and mirrors (see what we did there?). Along with the cigar, the buyer also receives 1,000 lesser custom-rolled cigars, a tour of Regius’ Nicaraguan factory, and the chance to potentially name a new cigar line. But it all starts with buying that one cigar. 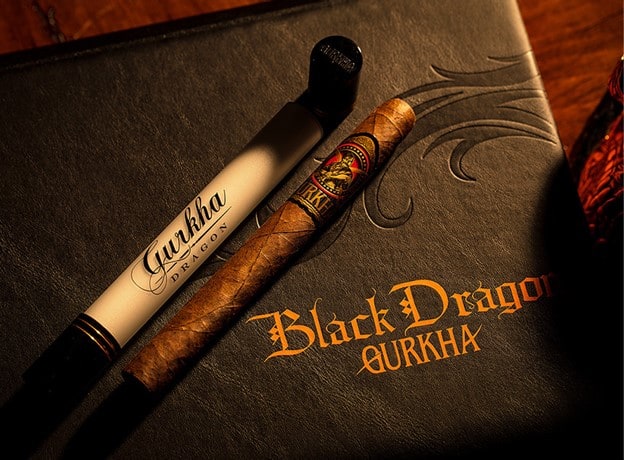 Made from Honduras tobacco by Gurkha, the cigar artisan manufacturer from the Dominican Republic (this isn’t the last time you’ll read about them!), Black Dragon cigars are a rare find. They’re peaty and sold by the box, 100 per unit, and marketed to luxury smoking collectors. The tobacco is sourced from Dominican long filler and Cameroonian binder, aged for 5 years after being wrapped in beautiful Broadleaf Maduro from Connecticut.

The value of collector cigars isn’t just in the tobacco, cover, and flavor, but also the box. The handcrafted camel bone cigar box that contains the Black Dragon smokes is a huge value-booster. 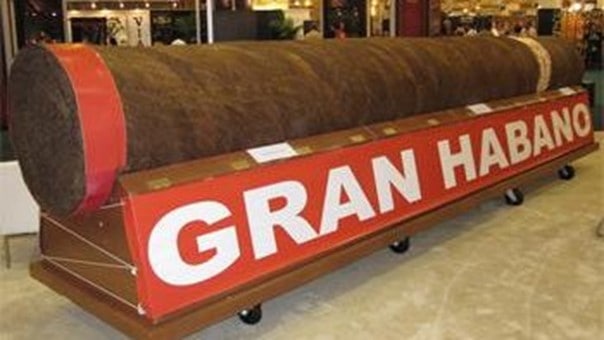 1,600 pounds of tobacco went into this masterpiece, about the equivalent of 25,000 cigars. An unnamed cigar enthusiast bought El Gigante for $185,000.

El Gigante even came with its own cigar box! The 19-foot cigar can be lifted into its box if it really needs to be, which weighs about 900 pounds and is shaped like a train. 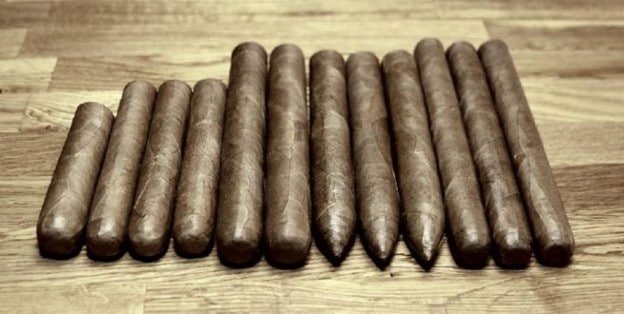 Here’s an oddity. Technically, these are the rarest cigars in the world, though not the most expensive (see below). These are not a modern manufacturer’s ploy to make the most extravagant cigar. Instead, they are 600-year-old Mayan cigars that were found buried, sealed in clay pots, by Tampa University archaeologists in 2012.

We know the Mayans smoked cigars a thousand years ago, though I doubt historians believed that could actually smoke the same ones!

Only one person gets to try these ancient artifacts. Gary Liotta, an avid smoking memorabilia collector and owner of the Santiago Cigar Factory, bought the whole box of 12 cigars for $507,000. 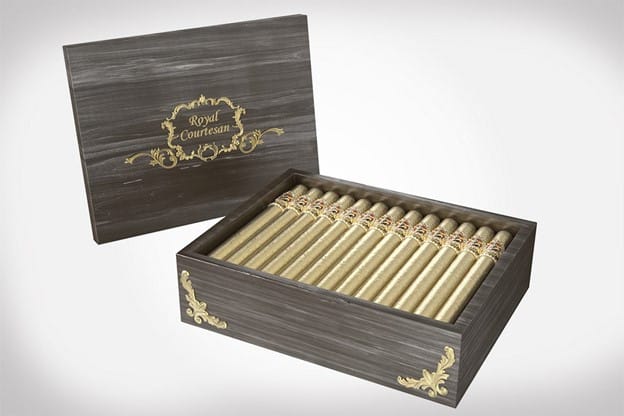 The most expensive cigar is the Gurkha Royal Courtesan Cigar. Known throughout the smoking world as the only cigar with a seven-figure price tag (per cigar, no less, not per box), the Royal Courtesan by Gurkha more than earns its extravagant name. Get a load of this.

Its tobacco is farmed from Himalayan Mountain reserves in Nepal and rolled by hand by blindfolded workers who are told to spiritually feel the contents while crafting it. The stuffing is soaked in pure Fiji water and then infused with Black Louis XIII cognac by Remy Martin which, if you didn’t know, costs $165,000 per bottle. It’s then wrapped in gold leaf and embedded with 5-carat diamonds.

This cigar is so valuable that whenever one is ordered, a personal messenger hand-delivers it to its new owner wearing white gloves (and, no doubt, an expression of the strictest solemnity).

The rarest, most expensive cigars in the world come in a few forms. Some are purposely limited in production to create an environment of decadence and scarcity. Others are simply made from so many valuable, exclusively sourced materials that they cost dozens of thousands, hundreds of thousands, and even millions of dollars per cigar.

When assessing these cigars, you can’t just look at the leaves. You have to examine the filler and binder, the wrapping, and even the humidors. Sometimes, those boxes are so well-crafted and in such limited supply that they’re the main attraction! But if you’re paying over $1 million for a smoke, at some point, it has to be about the taste. You may not ever taste them yourself, but at least you can read lists like these and imagine.

8 of the Most Expensive Tequilas You Can Buy

8 of the Most Expensive Pianos Ever Sold