8 of the Most Expensive Pianos Ever Sold

Pianos are both the epitome of musical class and the beginning musician’s instrument of choice. Though they date back centuries in one form or another, the modern piano is a relatively recent invention compared to the horn or drum. They have always been, in a sense, a musical luxury.

The world’s most expensive pianos come in two main types: those that are made from rare materials in a limited edition and those with sentimental or historical value. Combined, they make up some of the rarest artifacts that money can buy, explored by an exclusive realm of millionaire collectors and museums.

Here are the 8 most expensive pianos in the world. 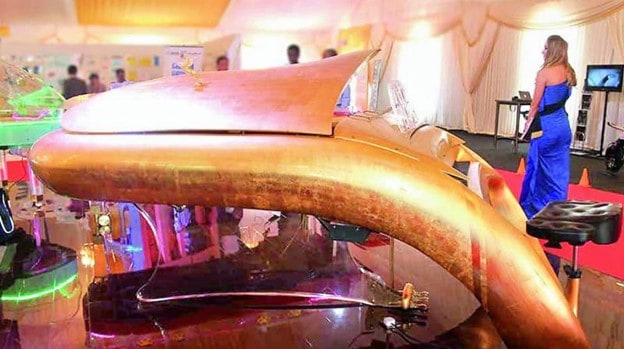 We’re starting this list already in the $1 million+ range with this Galaxy Piano, a truly unique piece of modern art that on its off-days can double as an instrument. The whole thing is a single gold, sweeping shape – even the seat is attached to the lip of the piano. The keys are curved to match the body, which is solid fiberglass encased in 24-karat gold.

Galaxy, the firm that built the piano, is based in the United Arab Emirates. They only made 5 of these otherworldly luxury pianos. Uniquely on this list, Galaxy is not an instrument manufacturer but a luxury display piece designer. In other words, the Galaxy Piano was made first and foremost to be shown in all its curvy glory, not to be played (though it does work). 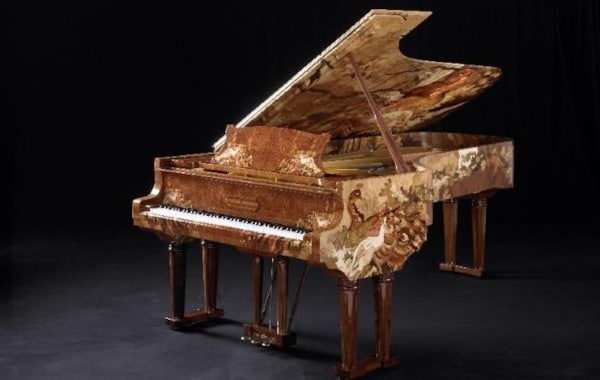 The first Steinway & Sons piano (and certainly not the last) to make this list is a piano called Sound of Harmony. The piano was a labor of love for a team of carvers and painters who spent four years constructing it as a tribute to Shi Qi, the famous Chinese painter. It was built in Hamburg, Germany and was sold for $1.63 million.

The piano has been crafted with inlays of 40 varieties of rare wood. The artwork is a tribute to Qi’s artwork, whose contemporary Chinese style has captivated the art world for decades.

Sound of Harmony was purchased by Guo Qingxiang, an art collector. It was displayed at the Expo 2010 Shanghai China, which is essentially China’s equivalent of the World’s Fair. 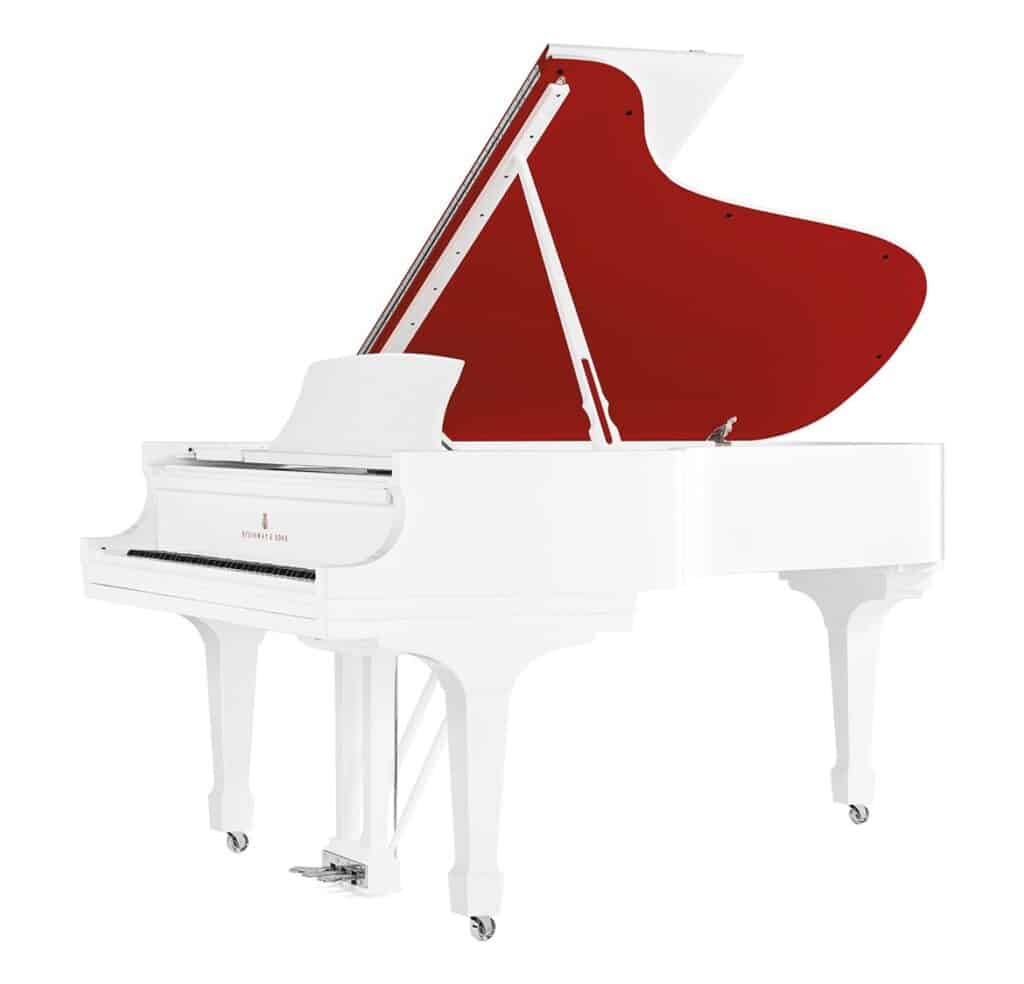 The Red Pops is a parlor grand piano made by Steinway & Sons for Bono, the lead singer of U2, to be sold at a charity auction in New York. The auction, for RED by The Global Fund, which raises awareness for AIDS, malaria, and tuberculosis in Africa, earned over $26 million for that cause. $1.925 million of it was from the purchase of this piano by Stewart Rahr.

The piano is polished ebony with a red interior and a custom seat. The auction was conceived as a commentary on the collaborative awareness of the developed world in the pursuit of using “ethical consumerism” to combat diseases in less developed countries. Whether a polished ebony piano worth $2 million demonstrates that principle is up to you to decide.

Before bidding began on this piano, Bono and Chris Martin (Coldplay) performed “Beautiful Day” (U2) and “Perfect Day” (Lou Reed) together, marking an already prestigious auction with a unique musical collaboration. 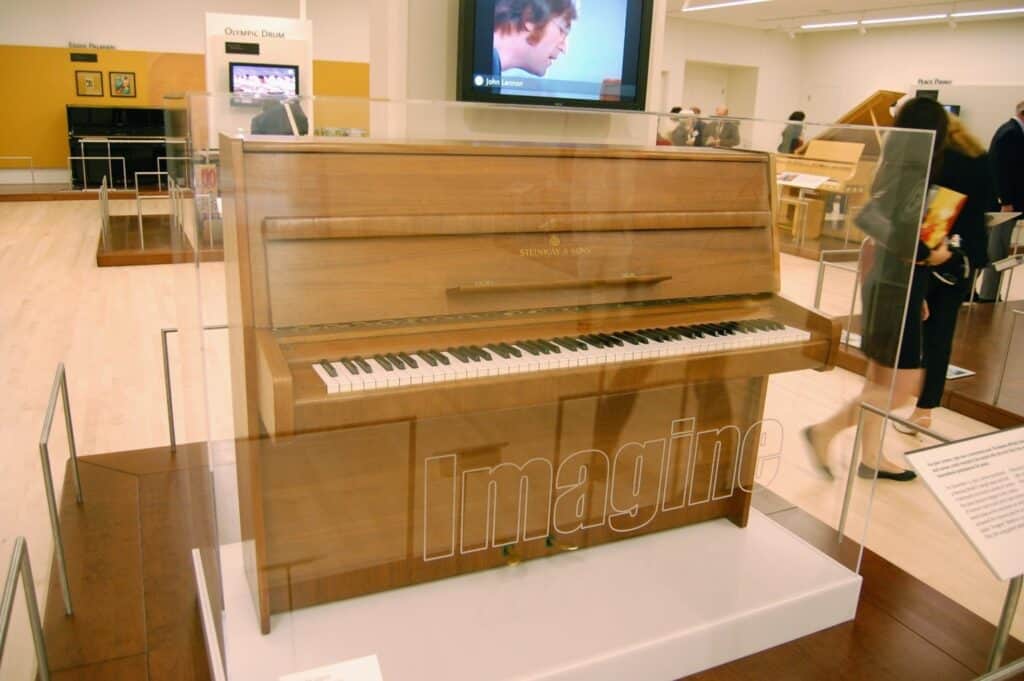 We mentioned that some of the most expensive pianos gain their status through nostalgia. This is the first entry where that’s the case: the unassuming, beat-up, plain wooden Model Z that just so happened to be John Lennon’s piano.

Steinway, by the longevity of its musical manufacturing prowess, managed to contribute not only some of the most luxury expensive pianos to this list but also some of the least luxurious. The very keys on which Lennon composed “Imagine” sold for $2.37 million in 2000.

The buyer of this one-of-a-kind piece of music history was none other than George Michael. The pressure of owning such a significant piece proved too much, however, as Michael donated it to Liverpool’s Beatles Story Museum (though not before recording some new songs on it, for old time’s sake!). 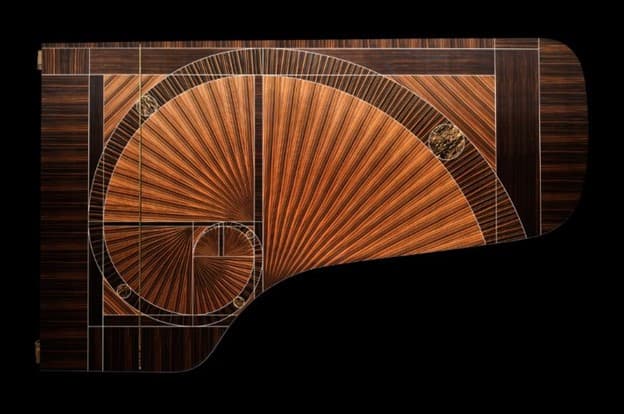 Steinway & Sons designed their Fibonacci piano after the famous mathematical sequence (more on that below). The result is a piano that flows in an expression of wooden spirals, designed by Frank Pollaro in a limited-edition sculptural pattern.

This instrument costs $2.4 million due to its exclusivity and design but also its composition. The woods used to handcraft the outer veneer of the Fibonacci piano are of the rarest variety, inlaid using the ancient intarsia method, which fits the pieces together in handcrafted pattern molds that connect like a puzzle. The result gives the illusion of three-dimensional depth in a wooden form.

The Fibonacci sequence is a mathematical series created by Leonardo of Pisa. The numbers expand in a way that numerically denotes a spiral, which both artists and naturalists have used since the 1200s to describe patterns in the universe. From the Renaissance golden ratio in art proportions to the spirals of a nautilus’ shell, Fibonacci’s sequence can be seen anywhere (even in this piano). 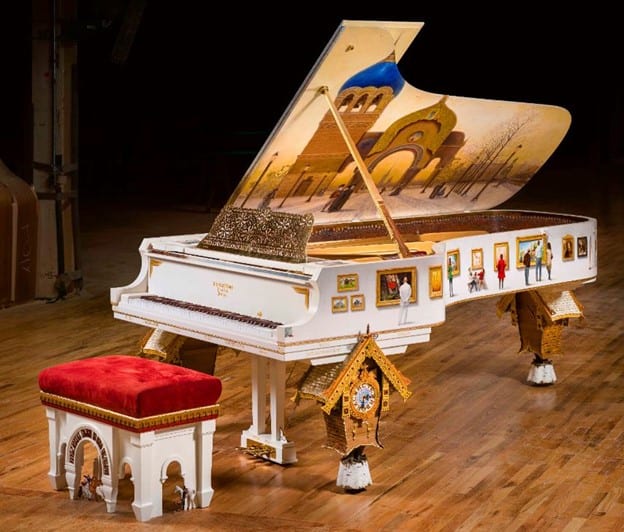 The piano called “Pictures at an Exposition” is the last on our list made by Steinway & Sons. Paul Wyse designed the piano, which is equal parts instrument and art, by customizing a Model D by Steinway, repainting it, and creating additional wooden fixtures.

The legs of the piano feature Russian cuckoo clocks. It even as its own bench – a velvet seat with legs carved in the style of medieval Russian folklore. Pictures at an Exposition is currently stored in Steinway’s vault, but is still for sale! It can be yours if you have $2.5 million laying around.

The name of this piano is a reference to a composition by famed Russian composer, Modest Mussorgsky. The paintings on the piano represent the listener’s experience traversing the subject of the piece and even includes a portrait of Mussorgsky himself. 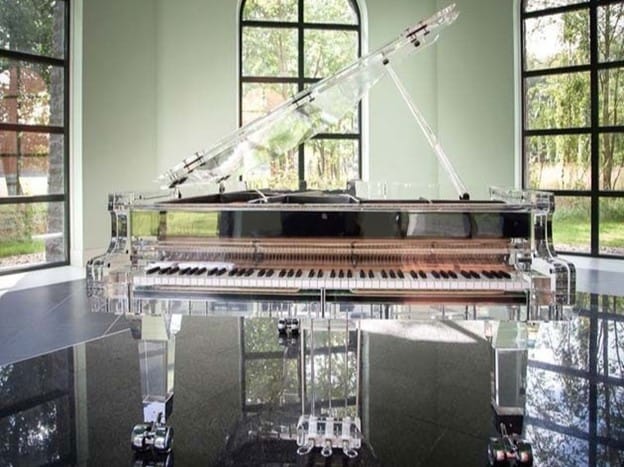 After so much sweat and toil from our friends at Steinway & Sons to make the world’s most valuable piano, they were undercut by Heintzman in the end with this Crystal Grand. It was first played in public at the 2008 Olympics in Beijing. The fingers belonged to famed pianist, Lang Lang.

This completely transparent piano is made of crystal in every area except the keyboard and sound board. The Canadian manufacturer designed this piano to be the world’s most valuable, and they pretty much succeeded, creating a one-of-a-kind sculpture worth $3.22 million. They were beaten out for our top spot, not by a piano made of a more valuable material, but by one made from a memory of Paris and a beautiful friendship.

There’s a reason, other than the expense and difficulty, that pianos are not usually made of crystal. Heintzman predicted their crystal grand to be so fragile that they retired it after its single performance at the Olympics. 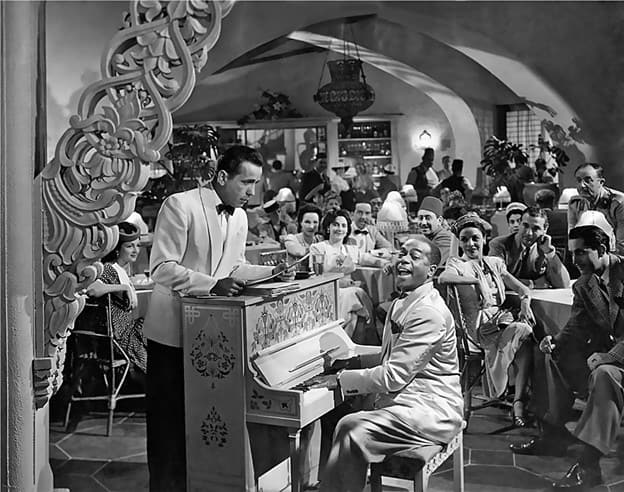 The most expensive piano is the “As Time Goes By” piano. It’s named as a reference to the song that Sam (Dooley Wilson) played on it in Casablanca (1942). The piano itself is nothing special – a miniature upright piano with 58 keys (normally, pianos have 88), and believed to be designed by Kohler & Campbell. It has a decorated wood construction.

It’s the film that makes the piano special, as it was the instrument that played arguably the most famous leitmotif in movie history. Leitmotifs are recurring melodies that hold some significance to the story. In this case, “As Time Goes By” is a memory of lost love – for the audience, it becomes a stand-in for the entire studio and, at times, for Hollywood movies as a whole. At a 2014 auction, it was sold for $3.4 million, making it the priciest piano in the world.

The song as played in this movie is so famous that it’s used as the Warner Bros. movie studio’s theme song. If you’ve ever seen a WB film, you’ve probably heard the tune without knowing it, played at the beginning as the logo appears on screen: “The fundamental things a-pply. As time. Goes. By.”

The most expensive pianos in the world are either luxury designer pieces or valuable historical artifacts. They cost millions of dollars to collectors of music memorabilia, museums, or even art galleries. To own or even see one is a luxury. But for the ones on public display, maybe add them to your bucket-list? As time goes by, it’s hard to imagine they’ll lose their mystique.

10 Rarest and Most Valuable Violins in the World