8 of the Most Expensive Tequilas You Can Buy

Tequila, the spirit of Mexico (in more ways than one), is well-known for salted rims, lime wedges, Sunrises, and even celebrity distillers like Dwayne Johnson, AC/DC, and George Clooney. Derived from pulque, the same fermented drink the Aztecs created from the agave plant in the 1000s B.C., tequila must be properly mixed and aged to bear the famous name.

Since the Mexican government declared tequila its intellectual property back in 1974, it has become a drink of pride and exclusivity. Whether drinking añejo or reposado versions of the famous drink, as a Sour, Margarita, Sunrise, Mexican Mule, or just straight, the sweet, sugary taste accented with citrus and pepper is instantly recognizable.

But we’re not talking about any old stuff in this article. This is the rarest of the rare. Here are the 8 most expensive tequilas in the world. 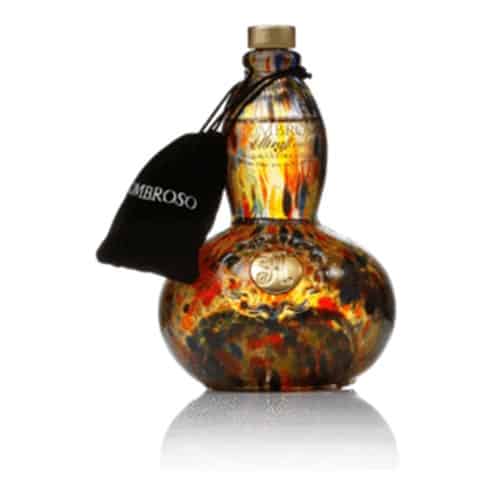 Asombroso Ultra Añejo is known for its rare, unique, and old tequilas. Extra or ultra añejo is any that was aged in oak barrels for over three years – this bottle was aged for eleven. All that time in classic casks made from French oak leads to ultimate refinement, a refinement that costs $1,400 or more to taste.

The bottles of the Asombroso Ultra Añejo tequila are hand-brown glass decanters, making each one its own unique artifact, an artistic vessel for the smooth drink inside.

Asombroso out of Rancho Santa Margarita in Orange County, California prides itself on being the most exclusive tequila in the world (with Mexico’s permission, of course). Its vintage eleven-year-old tequilas like this one are from owner Ricard Gamarra’s private collection. The drink is made from nine-year-old blue agave plants and aged for eleven years, giving this exclusive vintage collection a turnaround time of about twenty years! 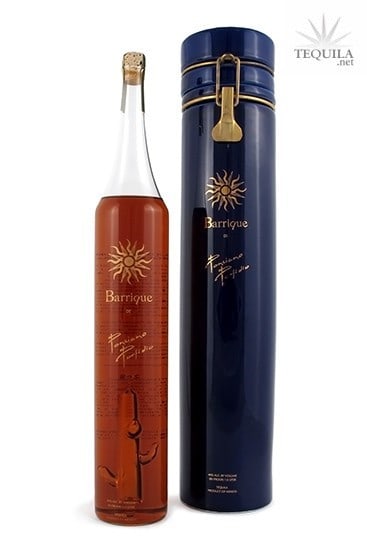 For some rare tequilas, the bottle is even more important than the drink, which is the case with the Barrique de Ponciano Porfidio tequila. The long, thin bottle (thinner than a wine bottle) depicts a sun insignia, text, and an image of a cactus, all engraved in 21-carat gold.

The tequila inside that amazing bottle is aged in French barrels for ten years, made from pure agave, and completely undiluted by minerals or additives. To keep it valuable, Porfidio restricts its production to 2,000 bottles per year. As a result, it retails for at least that much.

Most tequila on this list is aged in barrels made from virgin oak. However, Porfidio wanted to impart different flavors and additional luxury to this tequila, so they used decadent woods like Esche, Cherry, and Acacia, which is incredibly uncommon and gives this tequila its unique color. 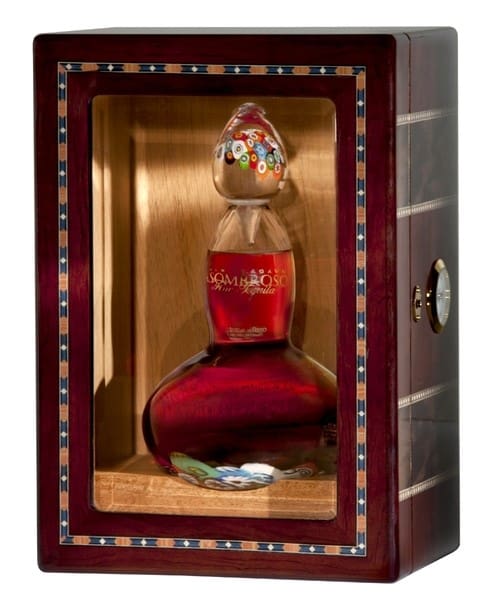 The bottles of the Asombroso Reserva Del Porto Tequila are glass with crystal stoppers. They sell for $2,800 each, not because the bottles are lined with jewels, but because the tequila is so uniquely good.

The contents of the Del Porto tequila bottles have been aged for five years in French oak barrels and vintage-dated like wine, meaning signed and numbered to show age and exclusivity. The tequila is then processed in Port Wine barrels with sugar, which is why even among tequilas, Del Porto is exceptionally sweet. These Italian masterpieces are highly coveted collector’s pieces.

The decanters were designed over two years by the Italian artist, Luciano Gambaro. They are sold in cedar humidors to give an even greater feeling of rustic luxury. 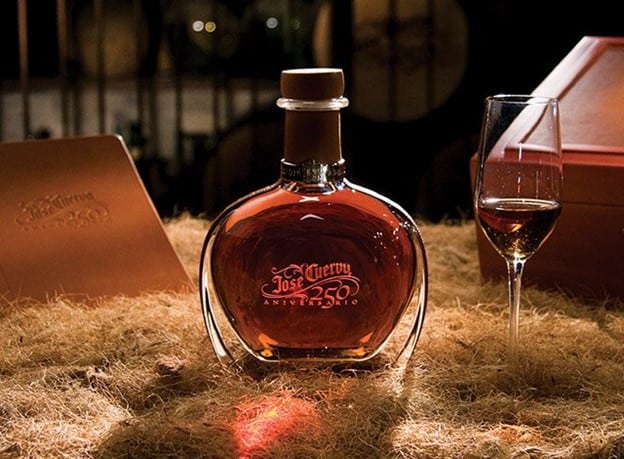 The crystal bottle of the Jose Cuervo 250 Aniversario tequila makes it look like designer cologne. The intense, warming flavor is a result of the single crop, mature agaves that go into the raw material of Jose Cuervo tequila. First, the drink is aged in American and French oak barrels and then blended with other flavors to give it its signature notes of chocolate and vanilla, with a butterscotch aftertaste. Spanish imported sherry barrels then serve as the vessels for the next step of the aging process.

Each bottle of Jose Cuervo 250 Aniversario tequila is sold in a hand-blown glass bottle and retails for over $2,000.

Sherry, a fortified white wine made from grapes native to Spain is known for being naturally dry and crafted to be sweet. The sherry barrels that Jose Cuervo tequila uses for the aging process give it a much smoother, creamier feel than tequila aged only in oak. 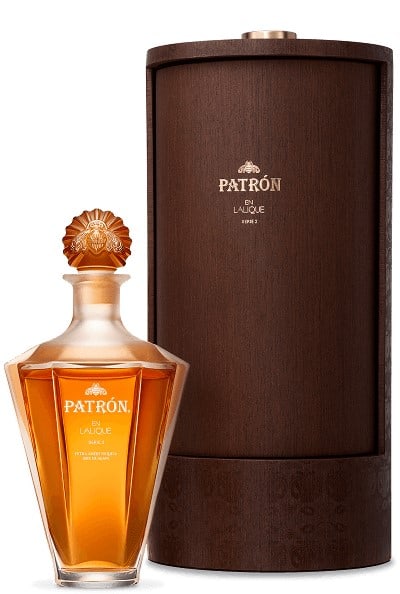 The Patron En Lalique: Serie 2 Tequila bottle looks like a fine French perfume. The crystal glassware sits sparkling on shelves showing off a modernized sculpt of the original Patron En Lalique decanter, now gilded in white gold. The tequila inside is an extra añejo, with notes of French and American oak from the seasoned sherry barrels that the liquid gold spends eight years sitting in.

The Patron En Lalique crystal decanter was inspired by the early Art Deco style of the artist, Rene Lalique. Art deco can claim a common lineage in both French and Mexican art of the last century, so this deco bottle filled with the spirit of Mexico is the history of the style made poetically literal. 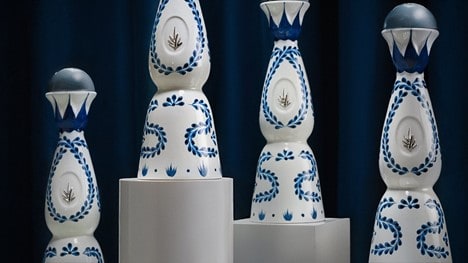 The Clase Azul 15th Anniversary tequila costs $30,000 per bottle. Each bottle is made from ceramic and inlaid with amber and 24k gold. This tequila was introduced in 2012 to celebrate the brand’s 15th anniversary and was only produced in a limited edition of 15 bottles.

This tequila was aged 15 years in Spanish barrels after being distilled at Tequilas del Senor. The drink itself is a blend of several reserve tequilas. Clase Azul founder Arturo Lomeli has stated that his original branded tequilas were tacky and cheap. This one represents the work he has done to turn his name into a luxury product.

The bottles are crafted in the Mexican Destination of Origin style, almost like works of art by themselves. All 15 bottles were sold collectively to the Fundación con Causa Azul A.C. for $450,000. 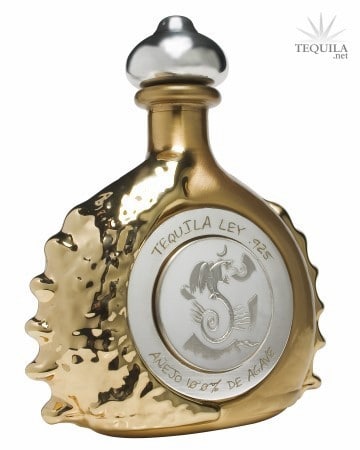 Back in 2006, a bottle of Ley .925 Tequila Pasion Azteca Ultra Premium Anejo was sold to a collector for $225,000, making it the priciest tequila ever sold at the time. The Blue Agave plant’s sap is distilled and stored for six years in the barrel to create Ley .925 Tequila Pasion Azteca Ultra Premium Añejo, but that’s not why the price is so high.

The real attraction is the custom-made bottle, made from pure platinum and pure white and yellow gold. The bottle’s design was made by Fernando Altamirano, CEO of Ley .925.

Altamirano is previously responsible for the world’s most expensive bottle of water, which costs $3.3 million. Supposedly, the bottle has been filled with water from glaciers in Iceland, and springs in Fiji and France, mixed with a little gold dust. The bottle itself is a sculptural reference to the painter Modigliani and inlaid with 6,000 diamonds. 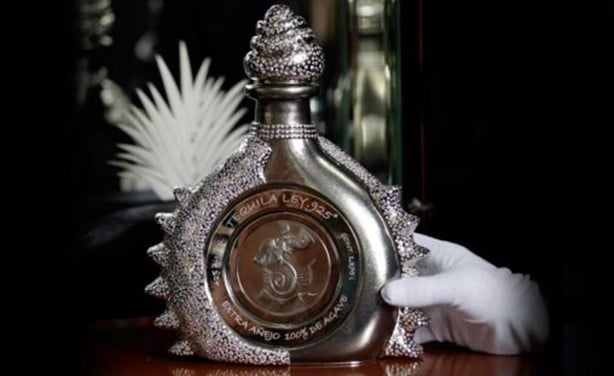 The most expensive tequila is Ley .925 Diamante Tequila. The bottle alone is a sight to behold, a two-piece handcrafted dragon shape sculpted from 4.4 pounds of platinum on one side and white diamonds on the other. The neck of the bottle is glass, sculpted in dragon scales and teeth.

Ley .925 Diamante Tequila is aged for 18 months in specialty oak barrels, then rested for seven years. The result is the true crown jewel in any tequila collection, costing as much as $3.5 million to own.

Tequila is most often seen in salt-rimmed margaritas or in the mix of a beautiful Tequila Sunrise. However, the tequila on this list is best enjoyed straight from the bottles of crystal, glass, gold, or even diamond. The work that goes into each one tries to earn the incredible prices they command in both retail and auction situations. Only the most astute connoisseurs can hope to enjoy a sip from one of the most expensive drinks in the world.

10 Most Expensive Items Currently on Amazon