Hamburgers are a $73 billion industry, 86% of which constitutes restaurant chains. This makes burgers among the world’s most profitable food, as well as one of the cheapest for any modern family to enjoy. However, these are not those burgers.

Forget McDonald’s. Forget Chili’s. Even forget Gordon Ramsay. These burgers are the ones made to break records and use rare ingredients to dominate their competition in luxury food preparation. Some of them are absolutely insane.

Keep reading to learn everything you need to know about the 8 most expensive burgers ever sold. 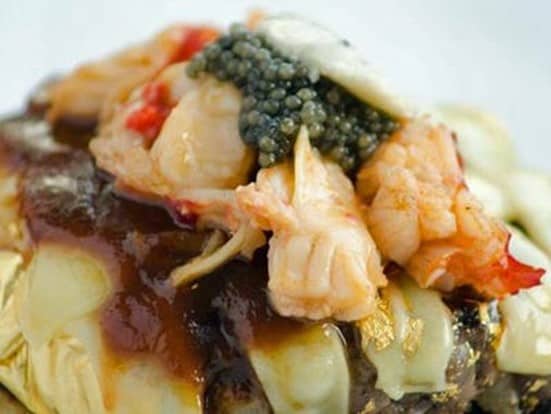 666 Burger is a luxury food truck in New York City that sells the most decadent burger that you can eat from a truck. Their burger, the Douche Burger, cost patrons $666 as a tribute to the truck. It begins as a patty of American Wagyu beef cloaked in edible gold leaf and topped with many luxury ingredients.

These include lobster, caviar, foie gras, imported gruyere cheese, and Himalayan rock salt. Chef Aliquo didn’t sell many of these burgers, but they certainly worked as a publicity stunt.

The Douche Burger has a bit of weirdness surrounding it even beyond the luxury toppings. In addition to the gold flake on top, the chef allows patrons to have a pentagram seared into a bun if they want. The burger is also wrapped in hundred-dollar bills.

Some have suggested that the burger is not actually the meat it claimed to be and may have been a hoax. 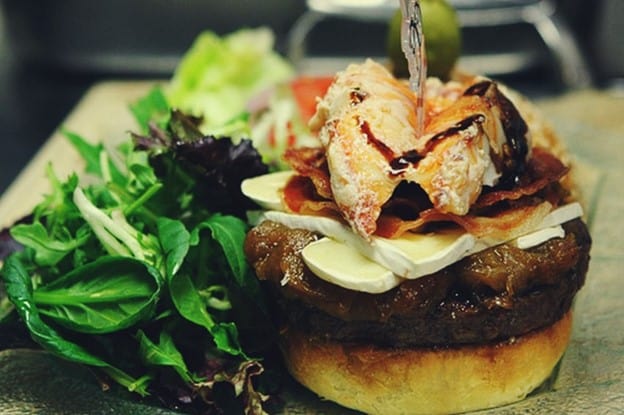 At Le Burger Brasserie in Las Vegas, the 777 burger once claimed the title as the world’s most expensive commercially sold burger at a price of $777. The burger justifies its price with a classy surf and turf take on burger meals that includes a patty of genuine Kobe beef from Japan and Maine lobster meat.

Le Burger Brasserie is cheating a tiny bit with their burger meal. The 777 burger comes with a choice of bun, including sesame seed, parmesan cheese, caramelized onion, or over-dried tomato ciabatta. But the real price hike comes not from the bun or even the toppings but from a bottle of Dom Perignon Rose Champagne, which is expensive ($300-$400) in its own right. 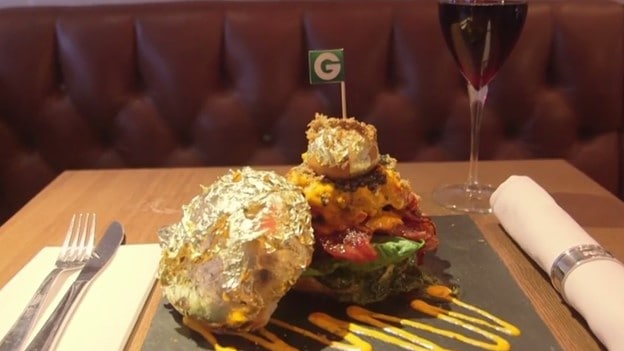 The Honky Tonk in London, England is a diner styled after American restaurants. They sell the Glamburger for 1,100 pounds, or the equivalent of about $1,770. It was conceived by Chef Chris Large and infused with so many luxury toppings and preparations that this expensive burger has become a true foodie’s heaven.

He starts with a 0.6-pound patty made from New Zealand venison and Japanese Kobe Wagyu beef, seasoned with Himalayan smoked salt and encasing a slab of brie cheese infused with black truffles. He then tops the burger with Beluga caviar and a hickory-smoked duck egg that is enrobed in edible gold leaf. The bun is also covered in gold leaf and seasoned with Japanese mayonnaise and a jus made from mango, champagne, and white truffle.

One of the Glamburger’s most luxurious ingredients is a lobster poached in decadent saffron from Iran and maple syrup, then laid over a bed of bacon. 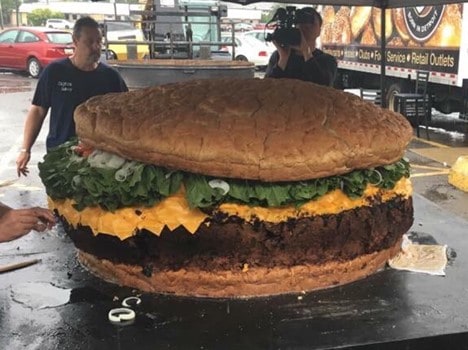 A place called Mallie’s Sports Grill & Bar in Southgate, Michigan has been selling burgers since 2005. They are now known for a gigantic, commercially sold hamburger called The Absolutely Ridiculous Burger, which weighs 338.6 pounds and costs nearly $2,000.

This burger consists of about 540,000 calories worth of ingredients, including 30 pounds of bacon and 36 pounds of cheese. To order it, you have to give the restaurant 72 hours advance notice to prepare this burger, which stands at about 3 feet tall, including the bun.

Mallie’s showed up on the show Man v. Food with an amended version of their Absolutely Ridiculous Burger, which weighed 190 pounds. Adam Richman and 40 other people tried to finish the burger in a two-hour time limit but only made it through 160 pounds of it. 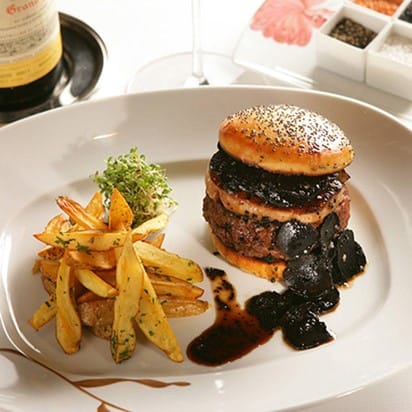 The Fleurburger 5000 is named after its flat rate price of $5,000, though as we’ll see, this one cheats a bit by adding extras to the meal to jack up the price. Regardless, it’s still a luxury burger experience. The Fleurburger is made from genuine Wagyu beef and foie gras. The bun is brioche and infused with truffles (so is the sauce). Shaved truffles form a little salad on top of the patty.

To increase the price of their famous burger, Fleur de Lys and chef Hubert Keller created this burger meal with a luxury wine experience as part of the deal. Your burger is served with a bottle of 1995 Chateau Petrus, a Bordeaux that sells by itself for $2,500 per bottle. The Ichendorf glasses you drink it in are souvenirs you can take home with you.

Keller, best known as a Top Chef Master, may have cheated a bit with the price of the Fleurburger 5000, but customers are at least assured of their meal’s value. Anyone willing to buy this burger receives a certificate of authenticity mailed to their address to prove they ate it. 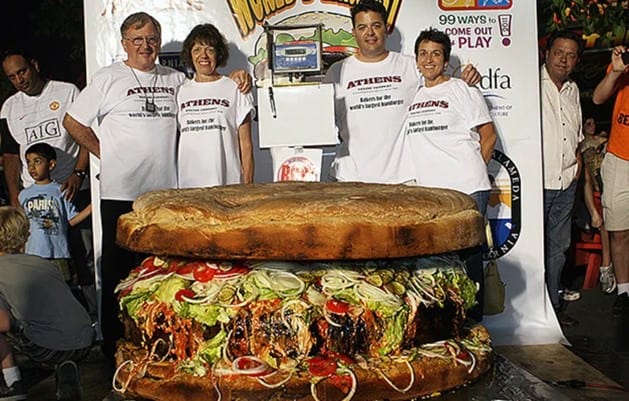 Juicy’s Foods and Ovations Foodservices in Corvallis, Oregon tried to hack the game of making the world’s most expensive burger by simply going for size. To do it, they created this burger using 777 pounds of cheap beef (the equivalent of about 352 kg) to be served at Juicy’s Outlaw Grill.

You can order this burger for $5,000 so long as you give Juicy’s 48 hours advance notice to create your monster burger. While this burger won the Guinness record in July of 2011, as you’ll see, an ambitious chef beat them at their own game.

The Outlaw Grill offers a truly unique experience by loading their grilling facility to the back of a 100-foot semi that can unload a Juicys meat masterpiece anywhere. This includes not only the famous Outlaw Burger but giant sausages as well. This self-sustaining moving grill fortress has its own running water, generator, and refrigerator. 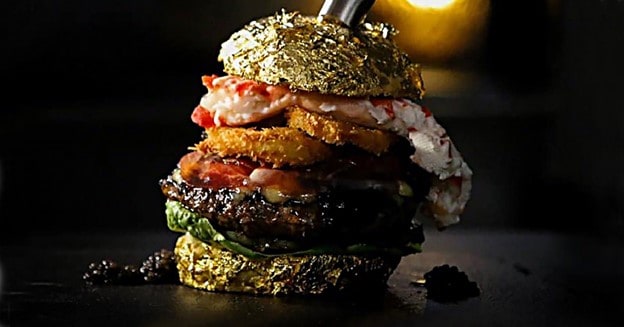 De Daltons is a diner in the Netherlands, in the city of Voorthuizen, and it sells what the Guinness Book of World Records regards as the world’s most expensive burger. To beat out the previous winner, that 700-pound monstrosity by Juicy’s Outlaw Grill, chef Robbert Jan de Veen set out to use only luxurious ingredients to create a single-serving burger that would be the world’s most expensive.

Thus, the Golden Boy Burger was born. Starting with a patty made from expensive Japanese Wagyu beef (specifically, A5 wagyu brisket and chuck short rib), and using such toppings as a relish of Beluga caviar and a BBQ sauce made from Macallan luxury Scotch, Jan de Veen was able to win the new record with this burger, which sells for $5,964.

The decadent toppings on this burger deserve their own description. In addition to the caviar and Scotch-infused sauce, the burger is also topped with white truffles, English cheddar, mayonnaise made from a smoked duck egg, Iberico ham, an onion fried in Dom Perignon, and a small salad of tomatoes pickled in matcha tea from Japan and King Crab poached in Puligny-Montrachet wine from Cote de Beaune in Burgundy, France. It’s all contained in a bun encrusted with truffles and edible gold leaf. 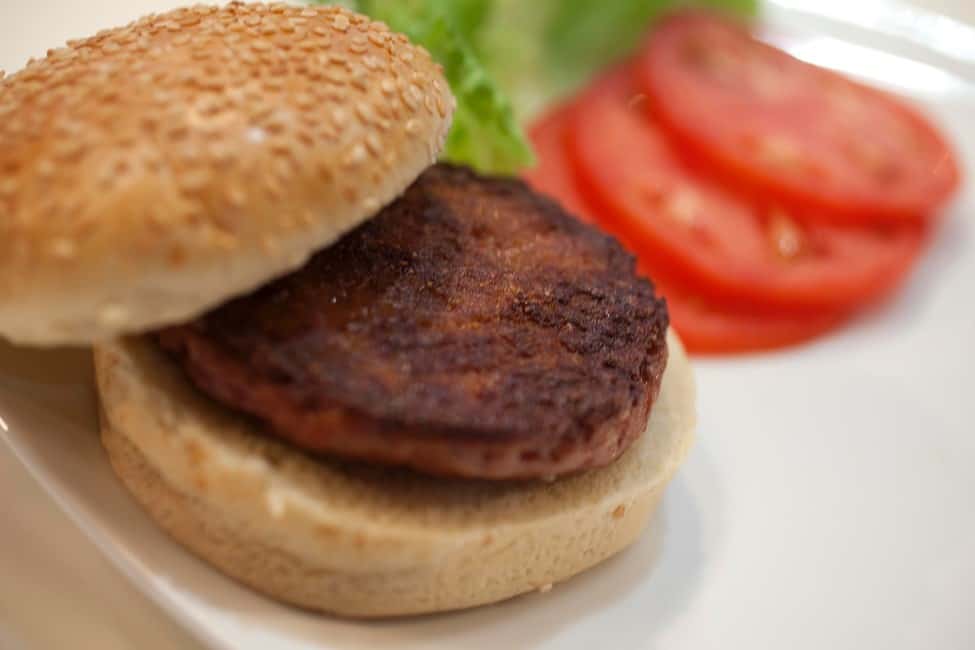 The most expensive burger is the Stem Cell burger. This may not be a commercially sold hamburger from a restaurant. As such, we considered not including it. However, it’s not only interesting but technically the most expensive hamburger in the world, so we decided to bend the rules.

The Stem Cell burger was made (or more accurately, grown) in the laboratories at Maastricht University in the Netherlands. It was created from 20,000 bands of muscle tissue derived from a cow’s stem cells. Biologically speaking, the burger is identical to actual beef. However, it was grown and tasted without ever taking an animal’s life. Its value was set at $330,000 to produce.

Many scientists predict critical shortages of food in the next century, which makes the stem cell burger a significant leap forward in food synthesis technology. We aren’t at Star Trek’s replicators yet, but this absurdly expensive burger may someday be considered the foundation. The first person to try it took a bite worth about $80,000 and said, “It’s a bit dry.”

Burgers are known as cheap meals but if you do it right, you can twist the simple hamburger into one of the world’s most expensive foods. All you need is some out-there decadent ingredients, the best meat in the world, and it doesn’t hurt to enclose your truffle-infused bun in a shining cloak of edible gold.