Champagne is a celebratory and luxury alcohol and while affordable bottles are available in grocery stores around the world, the best champagnes are only within reach for the rich. All of the bottles on champagne on this list cost tens of thousands of dollars all the way up to more than a million! Most the most expensive champagnes are special vintages or were found in shipwrecks in good condition. The top most expensive champagnes come in special bottles that are either larger than life or decked out in real gold and gemstones. 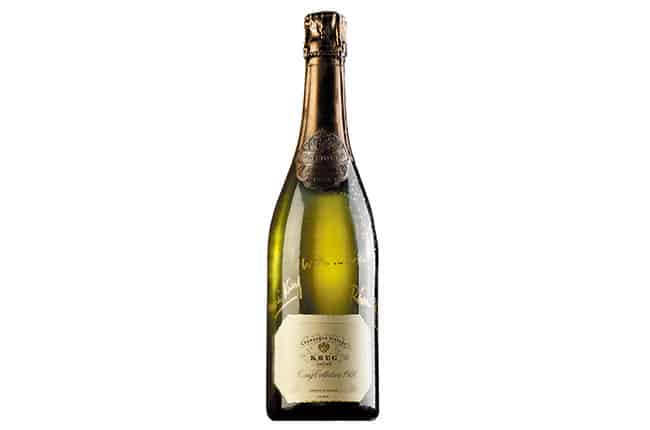 In 2009, a bottle of 1928 Krug Collection Brut Champagne was sold for $21,200 at auction, which was a record at the time. According to anyone who has tasted it, the 1928 Krug champagne is an excellent vintage and the high price tag is worth it. A very limited number of bottles of each Krug vintage are kept, which makes the 1928 Krug pretty rare.

Bottles of 1928 Krug Collection Brut Champagne were never formally released and prior to the 2009 sale, the last time that the champagne was sold was in 1939, following the end of World War II. 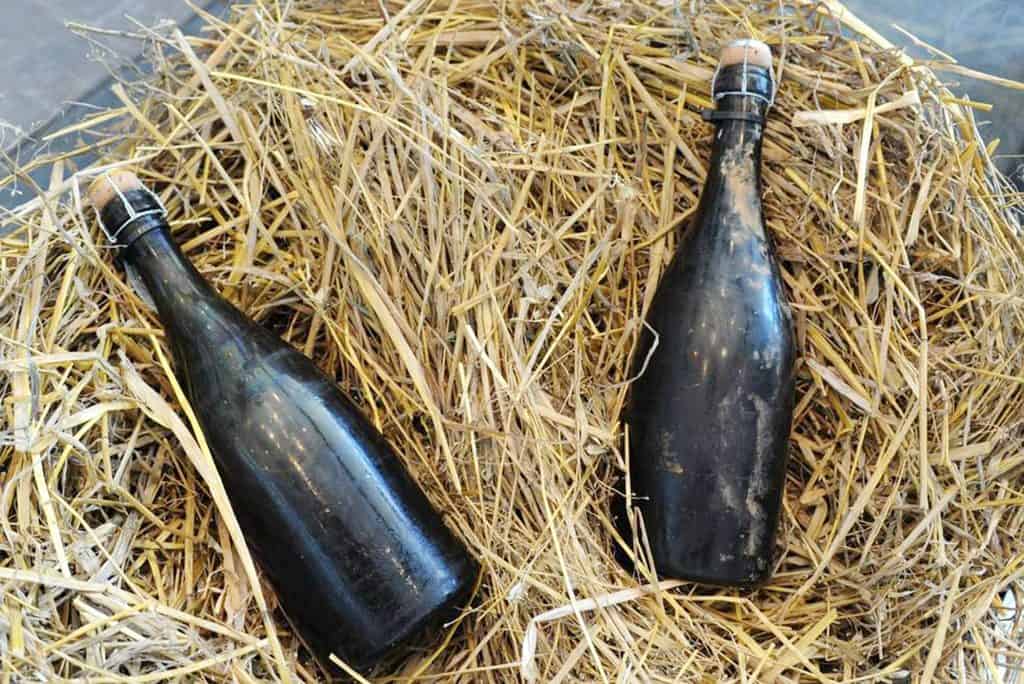 Bottles of 1841 Veuve Clicquot champagne were discovered in 2010 in the same shipwreck as the 1820 Juglar Cuvee higher up on this list. In total, divers salvaged 168 bottles of champagne from various brands that are still around today. Most of the bottles were auctioned off and the Veuve Clicquot has sold for as much as $34,000 per bottle. Surprisingly, all of the shipwrecked champagne was in good condition and has been tasted by wine experts.

Resting on the bottom floor of the ocean in total darkness with a temperature of 36 to 39 degrees Fahrenheit (2 to 4 degrees Celsius) was perfect storage condition for the 1841 Veuve Clicquot and the other champagnes. 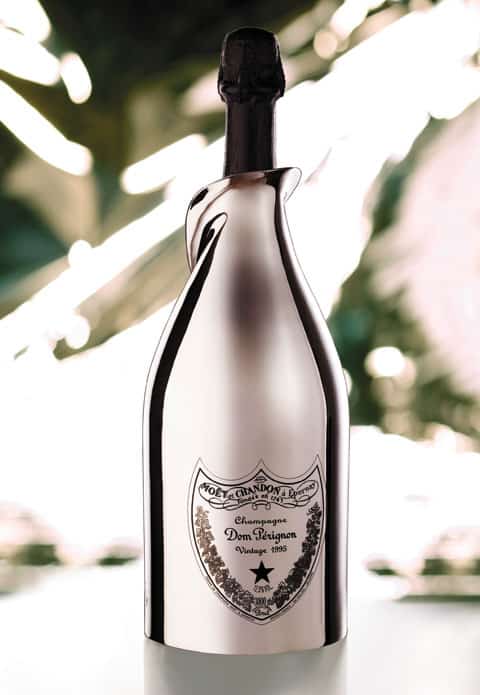 In late 2007, just in time to celebrate New Year’s Eve, Dom Pérignon released limited edition bottles of 1995 Dom Pérignon White Gold Jeroboam. The bottles were plated in white gold and filled with 1995 Vintage Jeroboam. Various luxury hotels and nightclubs around the world were given bottles of the exclusive champagne. Prices ranged from €12,000 per bottle from Hotel Byblos St. Tropez to $40,000 a bottle in the United States. Of course, the Dom Pérignon White Gold Jeroboam was produced in limited quantities, with 100 bottles distributed around the world.

The 1995 Dom Pérignon White Gold Jeroboam bottles were wrapped in a sheath jacket made of white gold that was designed by luxury jeweler Chaumet. 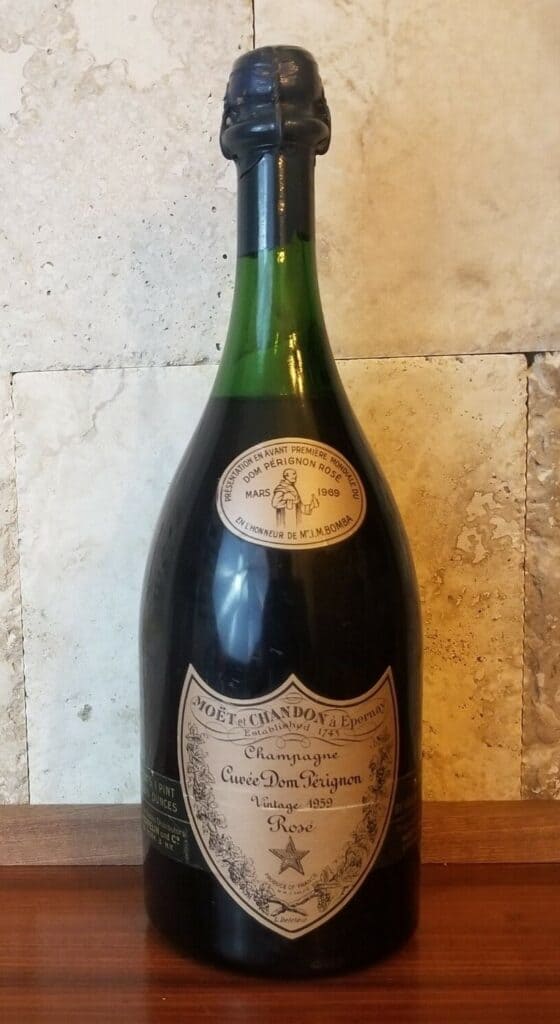 Bottles of 1959 Dom Pérignon Rosé are rare and expensive because that was the first year that Dom Pérignon made Rosé and the champagne was never commercially released. According to several sources, almost of the Rosé that Dom Pérignon made that year went to the Shah of Iran to be served to his 600 guests at the opening night of his celebrations to mark the 2,500th anniversary of the founding of the Persian Empire in 1971.

For several decades, the 1959 Dom Pérignon Rosé remained elusive until two bottles were auctioned in 2008. The champagne belong to real estate executive Robert A. Rosania and the winning bid was $84,700 ($42,350 per bottle).

Reportedly, only 306 bottles or 863 magnums of 1959 Dom Pérignon Rosé were produced. 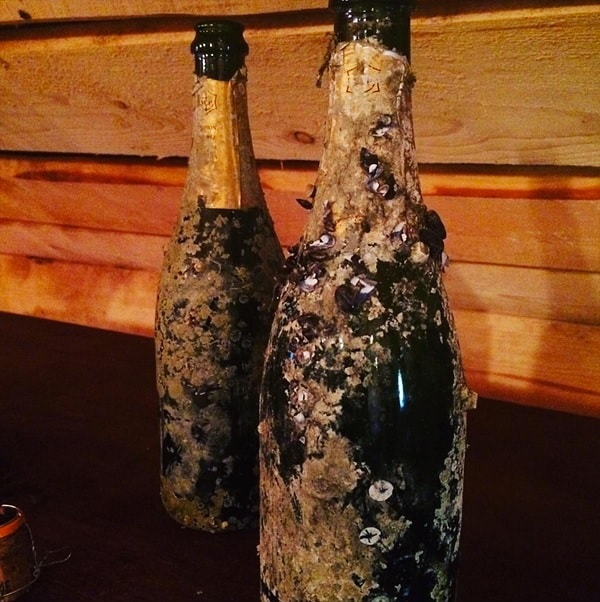 In 2010, a team of divers explored a shipwreck at the bottom on the Baltic Sea and made a once-in-life-time discovery when they found 168 bottles of 170-year old champagne. Their haul included champagnes produced by Heidsieck & Co., Veuve Clicquot Ponsardin, and Champagne Juglar (now Champagne Jacquesson). Over the years, these champagnes have been auctioned off and reportedly one bottle of 1820 Juglar Cuvee sold at auction for $43,000.

Because of the way the champagne bottles were sealed, all of them are still drinkable. Chemical analysis revealed the main difference between the shipwrecked bottles and modern Champagne was the sugar content, which was a staggering 150g per liter (compared to the 6g to 10g per liter that we are accustomed to today), but they were also less alcoholic (around 9.5% compared to today’s 12%).

While the bottles of shipwrecked champagne were the highlight of the divers’ discovery, they also found four bottles of beer. 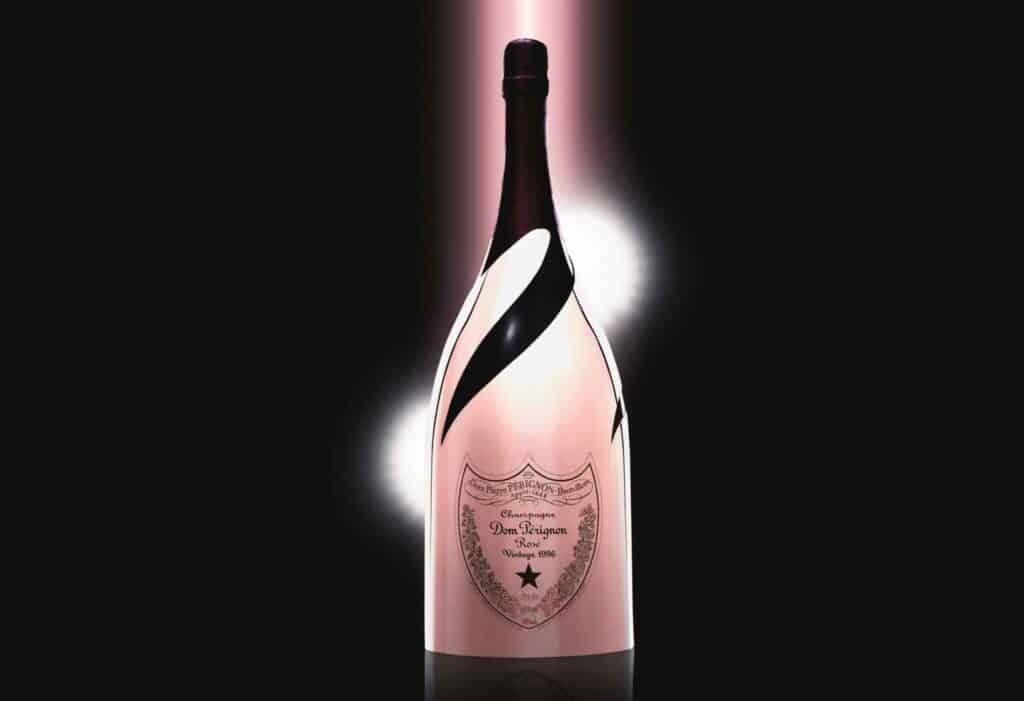 Dom Pérignon is often considered the pinnacle of champagne, but surprisingly it’s not the most expensive champagne out there. However, bottles of 1996 Dom Pérignon Rose Gold Methuselah are quite pricey. Only 35 rose gold-plated bottles of Dom Pérignon Rose Gold Methuselah were made and each one costs at least $49,000. According to those that have tasted it, the actual Rose Gold champagne tastes like berries and cream with notes of wild strawberries and apricots, complemented with hints of smokiness.

Bottles of 1996 Dom Pérignon Rose Gold Methuselah are so precious that sommeliers use white silk gloves to open and pour the contents for those who can afford a glass. 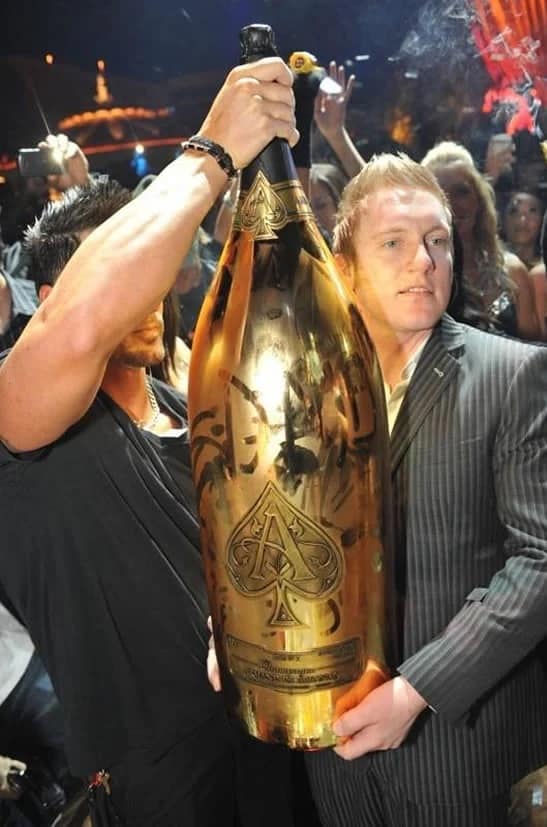 Armand de Brignac has become famous for its 30-liter bottles of champagne, which are the largest in the world and only produced by the brand. 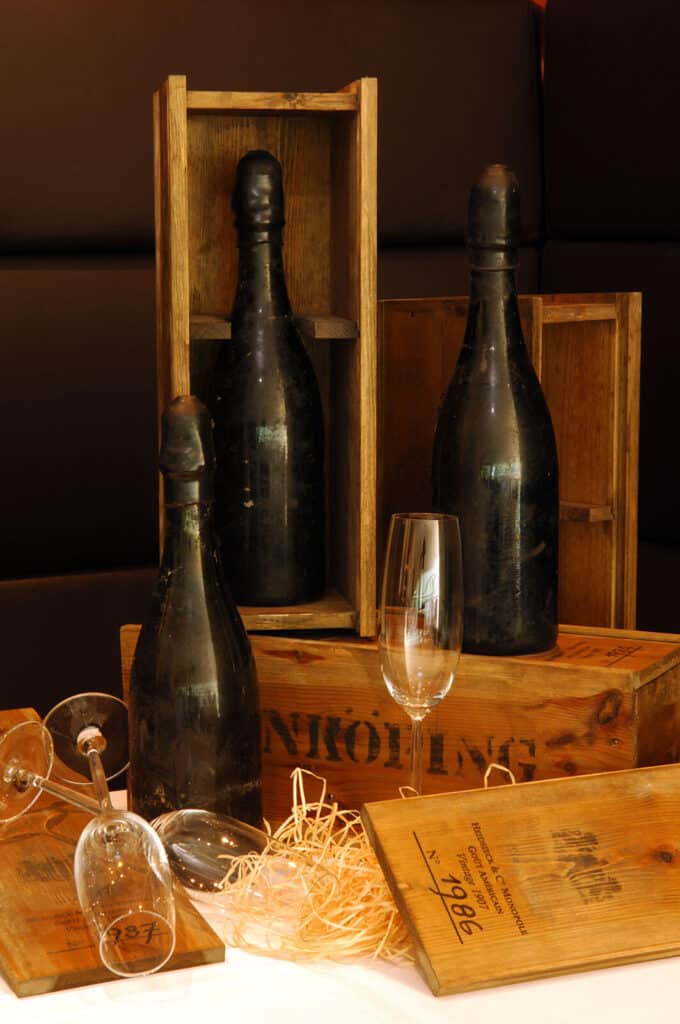 Bottles of 1907 Heidsieck & Co Monopole Diamant Bleu, aka the famed Heidsieck “Shipwrecked Champagne,” are often touted as the most expensive bottles of champagne in the world. This is partially true as some of the remaining bottles of the shipwrecked champagne have been sold for as much as $275,000. However, some bottles were sold for only a few thousand dollars.

In 1998, the shipwreck of the Swedish freighter Jönköping was found in the Gulf of Finland and the 1907 Hedsieck Shipwrecked Champagne was discovered. The cases of champagne were on their way to the Court of  Tsar Nicholas II of Russia when a German submarine sank the Jönköping in 1916, during World War I.

According to various sources between 2,000 – 3,000 bottles of 1907 Heidsieck “Shipwrecked Champagne” was discovered, but around 500 or so bottles were in undrinkable condition. 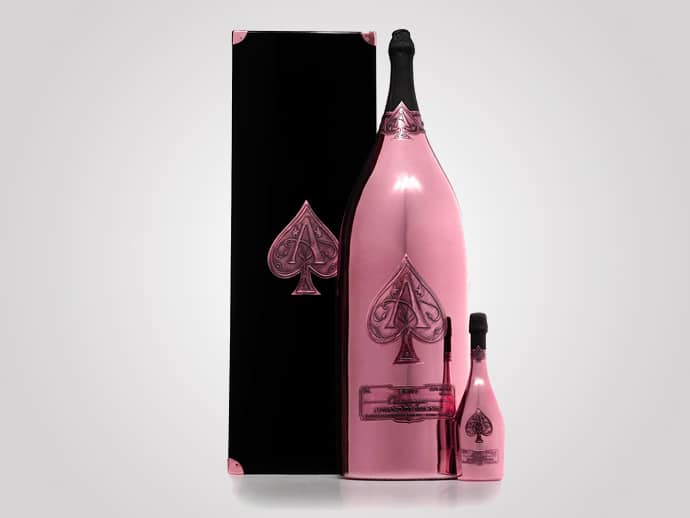 Rapper and business mogul Jay Z isn’t shy about his love for luxurious and extravagant things, so it’s no surprise that his champagne brand released the most expensive bottle of rosé champagne ever. In 2013, Armand de Brignac produced the Rosé 30-Liter Midas champagne, which cost $275,000 per bottle. The 30-Liter bottle weighed 100 pounds and was over 4 feet tall!

A very limited number of bottles of the 2013 Armand de Brignac Rosé 30-Liter Midas champagne were produced. Each bottle is hand made by eight artisans. The first bottle of the expensive Rosé champagne was uncorked at Hakkasan Las Vegas located at MGM Grand Hotel & Casino.

According to a press release for the the 2013 Armand de Brignac Rosé 30-Liter Midas champagne, one bottle contains the same amount of champagne as 40 standard 750ml bottles. 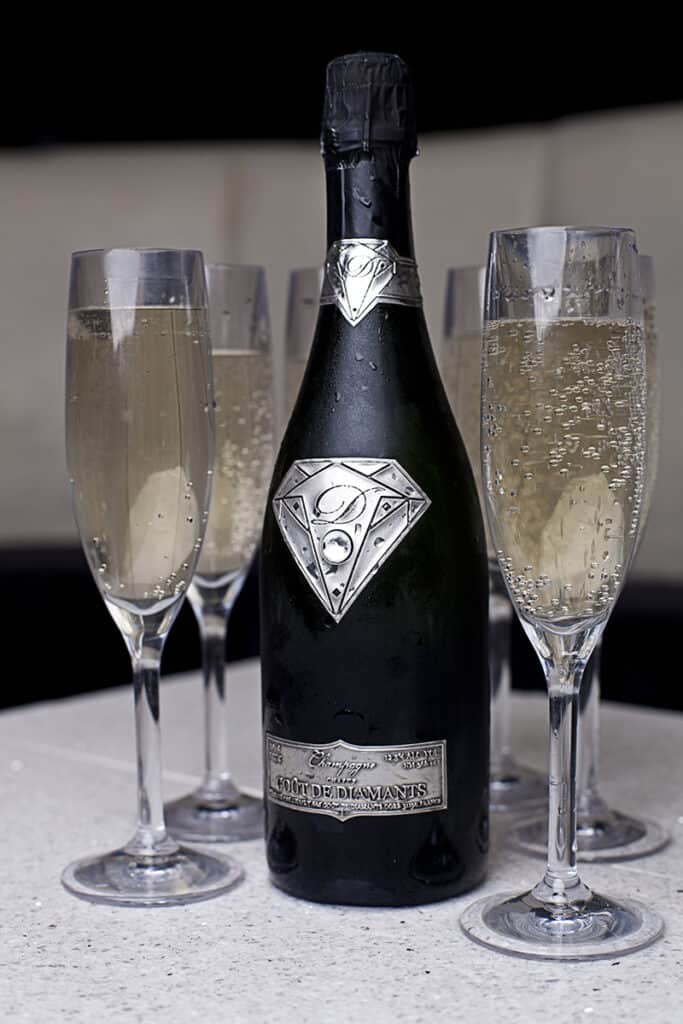 In 2013, Prodiguer Brands released the Taste of Diamonds (Goût de Diamants), the most expensive bottle of champagne in the world with a price tag of £1.2 million ($1,829,000). The champagne was created for a private client and the bottle, which is where most of the champagne’s value comes from, was designed by acclaimed luxury designer Alexander Amosu. The Taste of Diamonds bottle has a 18-carat white gold superman-like tag weighing at around 48 grams with a single flawless deep cut white diamond at its center, weighing at around 19 carats.

For an added touch of luxury, the Taste of Diamonds bottle can be personalized with an engraved name.

Not only is the Taste of Diamonds expensive, it’s quite rare as only 10 bottles were made.

While the Taste of Diamonds (Goût de Diamants) champagne might seem like all flash and no substance, it did win  ‘Champagne Best Taste 2012’ by Champagne Business News.

10 Most Expensive Barbie Dolls Ever Sold