These cute stuffed animals hit store shelves in 1993 and people quickly fell in love. They were affordable, at just $5 per toy, and they were cute.

But all that excitement wasn’t just about cute, cheap toys. Beanie Babies were supposedly worth thousands on the resale market.

By creating variations, limiting toy runs, and using good marketing, Ty Inc. created a lot of hype around these stuffed animals — and that hype still exists today, at least when it comes to expensive resale prices. 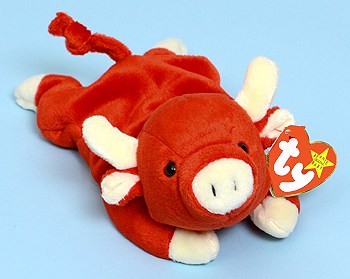 Snort the Red Bull was the second bull in the Beanie Baby family. According to his poem, the cute little bull loves to play basketball despite being so short.

Interestingly, Snort the Red Bull was originally called “Tabasco,” but the Tabasco company didn’t like that — so Ty Inc. changed the name.

Snort the Red Bull isn’t the rarest Beanie Baby, but he’s still worth a lot. Some estimates peg the price around $6,000.

Like other Beanie Babies, Snort can be worth even more if he has an oddity. A few known oddities for Snort include a third ear, an original “Tabasco” tag, and a tag reading “Goldie.”

According to one report, Snort the Red Bull is made from the same fabric as another Beanie Baby: Digger the Crab. 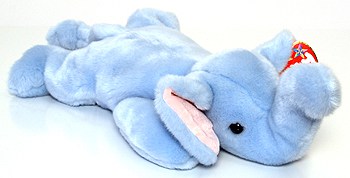 Peanut the Elephant is one of the rarest Beanie Babies, especially if you manage to find one that’s light blue. The cute stuffed animal was introduced in 1998 and ran until February 10, 2000.

Although there aren’t a lot of known oddities for this Beanie Baby, Peanut the Elephant can be worth thousands if you find a light blue version. One estimate says the toy might sell for $7,000.

Interestingly, Peanut the Elephant might be worth even more if he’s dark blue. These darker versions were reportedly made by mistake, so they’re even rarer than the light blue variant. 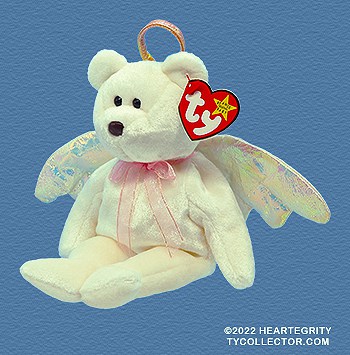 Halo the Bear is the eighth-most expensive Beanie Baby in the world This cuddly stuffed animal came out in 1998 but didn’t stay in production long. After being discontinued in 1999, Halo became a collector’s item. Today, the bear sells for an estimated $7,500.

As a children’s toy, Halo the Bear was used for some charitable efforts, including the Childrens’ Wish Foundation of Canada.

Halo is easily recognizable with her angel-like wings, halo, and brown nose. The bear also has a distinct poem reading “When you sleep. I’m always here. Don’t be afraid. I am near. Watching over you with lots of love. Your guardian angel from up above.”

Halo the Bear is meant to symbolize a child’s guardian angel. 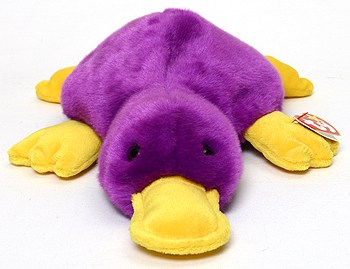 Patti the Platypus is the seventh most expensive Beanie Baby and marks the first toy on this list to hit the $10,000 mark. The cute animal has distinct features like a beak and cute flippers — just like the real thing.

Like other expensive Beanie Babies, Patti the Platypus gets a lot of her price simply because she’s rare. However, only some Platypus Beanie Babies are rare: if you find a magenta Patti, you might have thousands of dollars in your hands.

Interestingly, Patti the Platypus didn’t last very long. After her introduction in January 1999, Patti was discontinued shortly later in July of the same year.

Estimated Value: $20,000
Release Year: 1993
Interesting Fact: This Beanie Baby does not have a poem on its tag
Unique Feature: First-gen hang tag 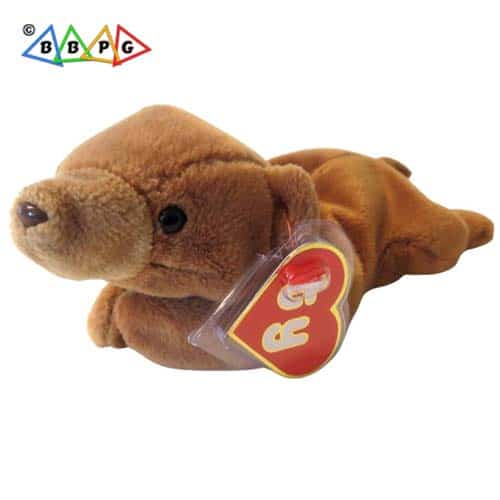 Brownie the Bear is a pretty unique Beanie Baby. The toy was released in 1993 and didn’t feature a poem on its tag. Brownie the Bear was also only produced in Korea and has a distinct snout.

Although Brownie the Bear has been reproduced at a few points, the original is where the money’s at. Original versions of this plush toy are worth an estimated $20,000 — but good luck finding one. Since it was one of the first Beanie Babies ever made, Brownie the Bear is pretty hard to find for sale.

Interestingly, Brownie was replaced by “Cubbie” the bear.

Although “Cubbie” replaced Brownie, both bears are essentially identical except for their tags. 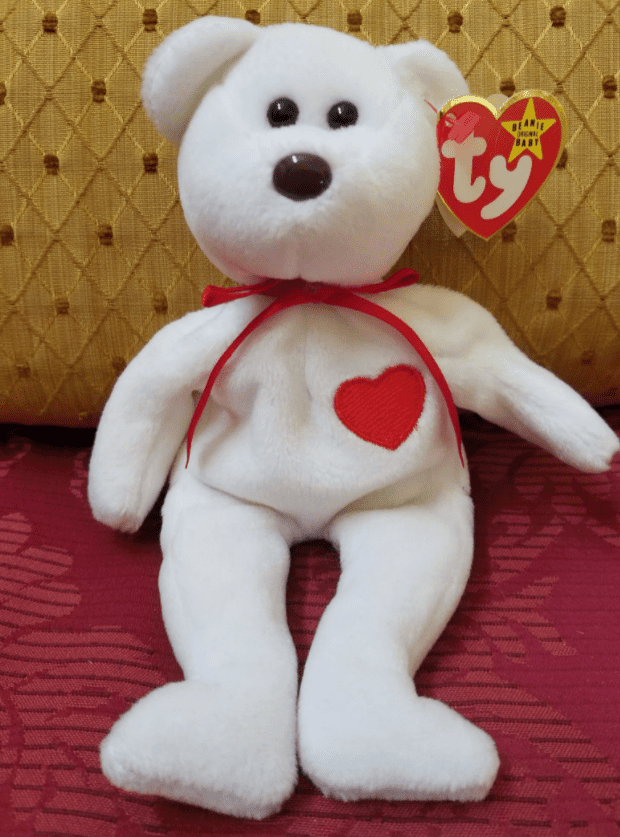 Number five on this list is a pretty controversial Beanie Baby — at least when it comes to just how much it’s worth. Although millions were made, Valentino is reportedly worth up to $40,000. However, the toy has to have some very specific tag errors for that price to be accurate.

Valentino the Bear was introduced in 1995 and retired just a few years later in 1998.

Although reports vary, some say Valentino is worth thousands if his name is misspelled on his tag. Other potential errors include Valentino with “Curly” written on the tush tag as well as “Maple.”

Unless it has some oddities, Valentino isn’t worth much. 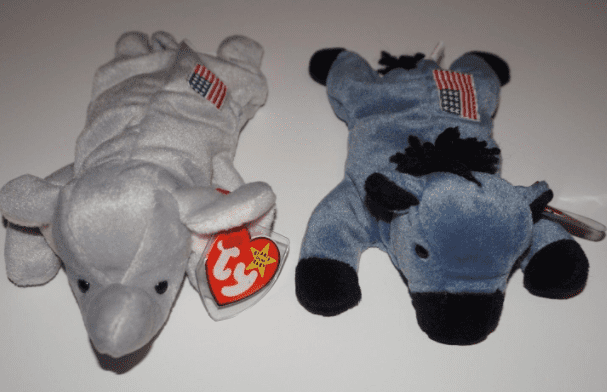 This set of Beanie Babies was released in 1996 to represent America’s two main political parties. Both Beanie Babies share the same poem, which reads, “Donkeys to the left, elephants to the right. Often seems like a crazy sight. This whole game seems very funny until you realize they’re spending your money!”

Although most sets of Lefty and Righty aren’t worth a whole lot, one particular batch that was signed by Hillary Clinton is worth thousands. According to some estimates, the rare set is worth about $50,000.

Hillary Clinton reportedly signed these Beanie Babies when a man asked her to as a gift to his daughters. 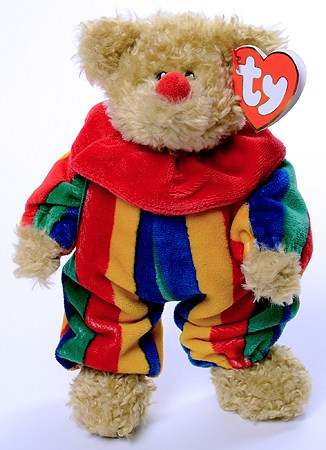 Piccadilly Attic comes with a short swing tag phrase that says “laughter is the best medicine.”

As the third most expensive Beanie Baby on this list, Piccadilly Attic is worth a whopping $120,000 — making him the first to surpass the $100,000 mark.

Although not all versions of Piccadilly Attic are worth a fortune, some variations like Piccadilly with unique coloring are really rare, making them expensive. Piccadilly also wasn’t the most popular Beanie Baby, so he wasn’t produced that long. That means there are fewer versions than other Beanie Babies, making them even rarer.

Estimated Value: $130,000
Release Year: 1995
Interesting Fact: Some oddities include Bubbles without eyes
Unique Feature: Made from the same fabric as Bumble 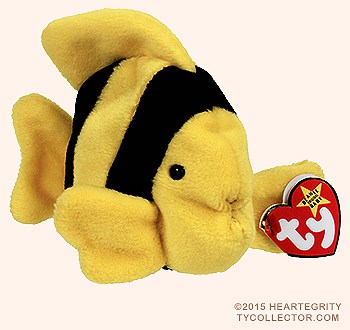 As such an expensive Beanie Baby, some collector’s sites warn that counterfeit Bubbles are on the market.

Bubbles’ poem reads “All day long Bubbles likes to swim. She never gets tired flapping her fins. Bubbles lived in a sea of blue. Now she is ready to come home with you!” 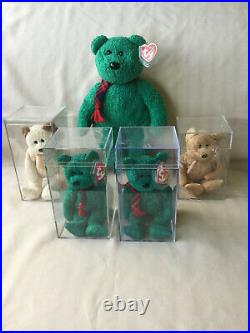 Large Wallace and His Squad are the most expensive Beanie Babies.

With a price tag of about $600,000, this set of rare Beanie Babies is easily the most expensive out there. The rare collection is known as Large Wallace and His Squad. It consists of several limited-run Beanie Babies and a uniquely big stuffed bear called Wallace.

Interestingly, most reports agree that Large Wallace and His Squad aren’t that unique apart from how rare they are.

Unlike other Beanie Babies, it’s unclear exactly how many sets of Large Wallace and His Squad were created.

As a group of Beanie Babies, Large Wallace and His Squad don’t have a definitive release date.

8 Most Expensive Golf Courses in the U.S.