Coin collecting has been one of the most enduring hobbies in the world, especially in the United States. Dimes are some of the most widely collected American coins and many rare pieces exist. Like most rare coins in any denomination, the rarest dimes are proofs, errors, or the few remaining coins of low mintage runs. The dimes on this list are worth tens of thousands and even millions of dollars and remain and do not often go up for sale.

The most valuable 1798 Large 8 Draped Bust Dime shows the cracks that later developed in the coin’s die. 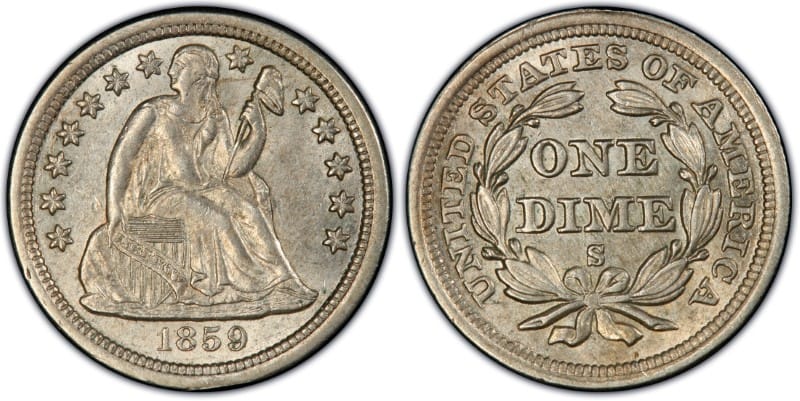 There are only two known 1859 S Seated Liberty Dimes in mint condition. 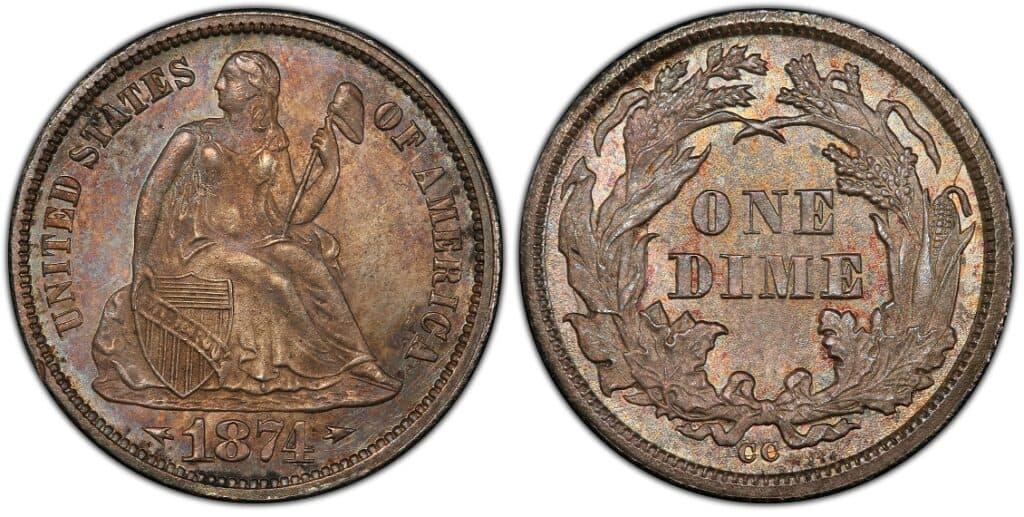 One 1874 CC Liberty Seated Dime with Arrows, the Norweb coin, was last put up for auction in 1989 and is reportedly in partially prooflike condition.

The 1916 D Mercury Dimes were the first to feature the new dime design created by Adolph A. Weinman. 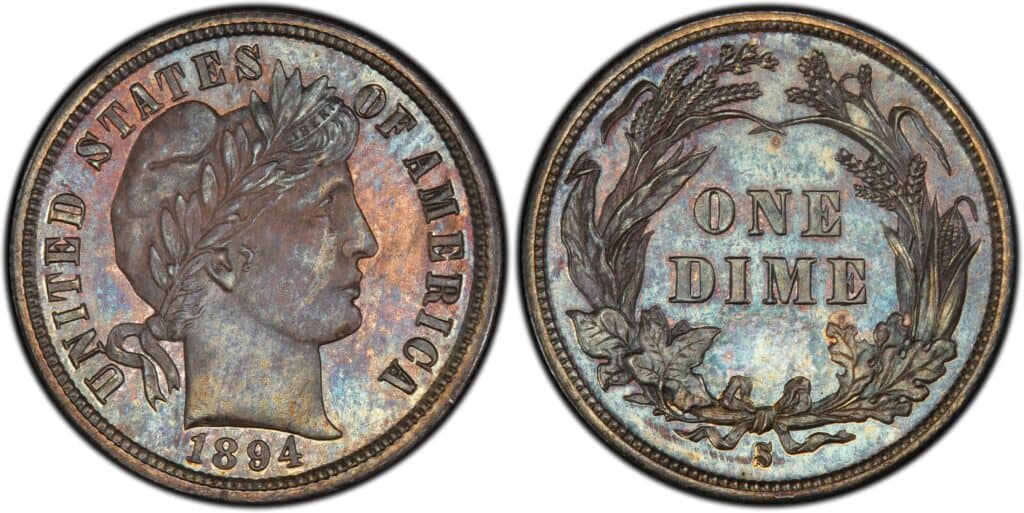 According to a widely circulated story, the 1894 S Barber Dime is rare because the San Francisco Mint Superintendent at the time, John Daggett, chose to only strike two dozen of these dimes for banker friends who heard there would be no dimes struck that year. However, no one knows for sure why so few Barber Dimes were struck in San Francisco in 1894, adding to the coin’s mystique. 1894 S Barber Dimes have always sold for top dollar, and its current value is nearly $2 million, the price paid at an auction in 2007.

John Daggett gave his daughter three 1894 S Barber Dimes and told her to save them as they would be valuable in the future. However, she spent one of her dimes on the way home from the Mint to buy ice cream, but she saved the other two until she sold them in the 1950s.

The highest graded 1871 CC Seated Liberty Dime is so beautiful and untarnished that it almost looks like a proof coin.

While there are about 200 or so 1872 CC Liberty Seated Dimes in any condition still in existence, there are only three in mint condition. The mint condition dimes were struck before the reverse die developed a light crack through the CC mintmark. The Carson City Mint used the same reverse die for dimes minted between 1871 to 1874, and the crack can be seen on later coins.

After it was opened in 1870, the Carson City Mint produced very few dimes in its early years. At 35,480 coins, the 1872 CC Liberty Seated Dime had the largest mintage of the period. 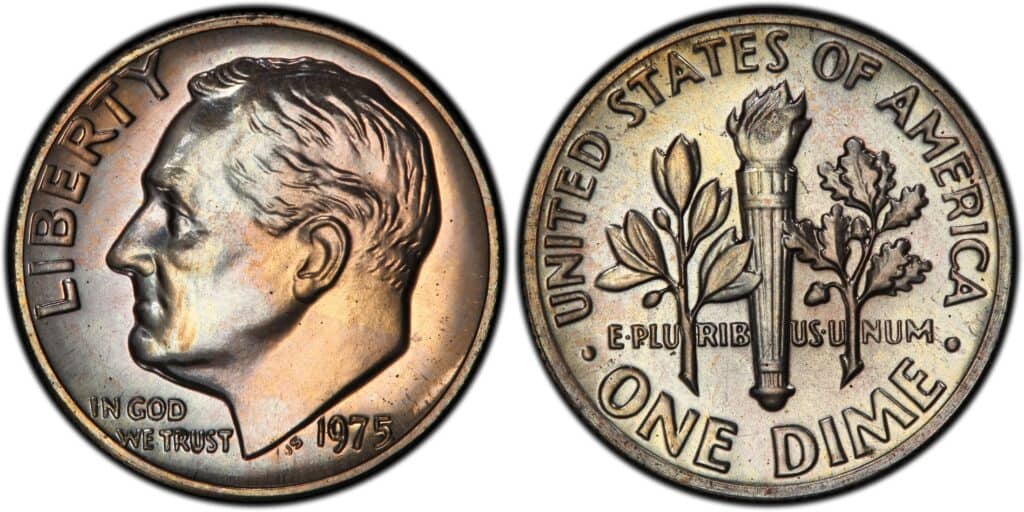 The 1975 No S Roosevelt Dime Proof is a rare mistake coin. Currently, there are only two known examples, which have been in the possession of a few owners since they were first discovered. The rare error was a result of the way proof dies were made after 1968, when the San Francisco Mint first began taking of striking proof coins from the Philadelphia Mint. The proof dies were prepared in Philadelphia, then sent to San Francisco where an “S” was added to the normal P-mint die. However, some dies were missed and error coins were struck. It is believed that the 1975 No S Roosevelt Dime Proofs were caught early and melted down, with a few later escaping the mint.

The 1975 No S Roosevelt Dime Proofs initially belonged to a California collector who had ordered five proof sets from the U.S. Mint in 1975 and noticed that two of the sets had no mintmark. 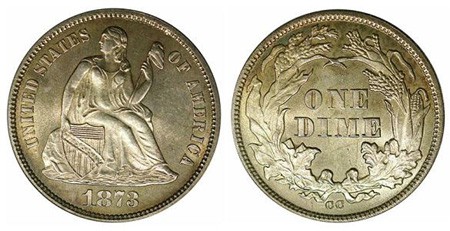 
There is only one known example of the 1873 CC No Arrows Seated Liberty Dime, making it the rarest dime in existence. Although the Carson City mint produced 12,400 of these dimes, they were supposedly all melted down when the weight standard for the coins was changed. However, a few of the dimes were saved for assay purposes (testing the coin to determine its ingredients and quality) and the one remaining 1873 CC No Arrows Seated Liberty Dime is reportedly from these few saved pieces.

The last remaining 1873 CC No Arrows Seated Liberty Dime has always been valuable and sold for a lot. Most recently, it was sold for $1,840,000 at auction.

The 1873 CC No Arrows Seated Liberty Dime first popped up in 1909 when crates of rare coins were traded for a pair of gold $50 patterns that were accidentally sold to future Secretary of the Treasury William Woodin.

10 Rarest Houseplants in the World