The Chevy Impala began construction in 1958 and has been a flagship passenger car for Chevy until finally being discontinued in 2020. An Impala Sport Sedan set itself apart in 1965 and the Impala continued to be Chevrolet’s most popular full-size car in the 80s.

By 2000, the Impala was a mainline front-wheel drive consumer vehicle ranked as the number 1 affordable large car by reporting agencies. The cars listed here are not the mainstream passenger models. These are the 8 rarest impalas that have ever been made. 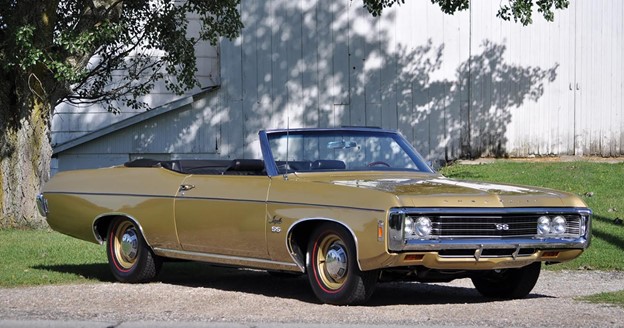 Fewer than 2,500 of these cars were made, complete with the 427 Super Sport trim. They were made with fenders that pushed out around the wheel wells in a unique body shape, rectangular taillights, and thin bumpers. The restyled 1969 version of the Super Sport also had deep-mounted dual headlights in a redesigned grille, as well as redline tires, heavy-duty suspension, and 427 cubic-inch powerplants. The vent windows were removed.

1969, the year of the Super Sport L72, was the last time Chevy built their rear-wheel-drive impalas. This SS is a little swansong to a brief era in Chevy history. 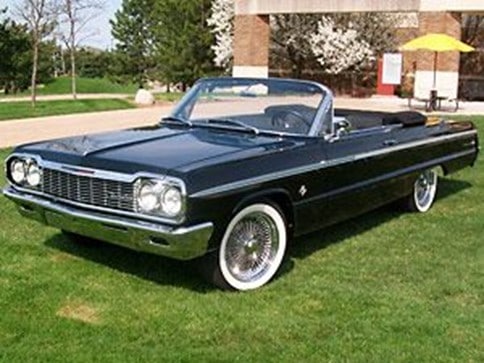 This won’t be the last time we talk about the Super Sport 409 Chevy Convertible, an incredibly good-looking car. This particular one was restored by students in a Custom Cars and Concepts course at Washtenaw Community College in Michigan. It’s the 1964 model, but beefed up with some custom advances, the most obvious of which is a custom 409-cubic-inch V8 engine. They built custom headers and exhaust as well.

The car went up for sale and took in $80,000, which was actually less than it cost to renovate it. However, the beauty and rarity of this car speaks for itself.

This particular Impala was up for the coveted Ridler Award at the Autorama show for custom cars in Detroit. Ironically, it didn’t win, despite taking in a hefty sum at the auction. It seems that “the people” appreciate a great Chevy more than the judges did. 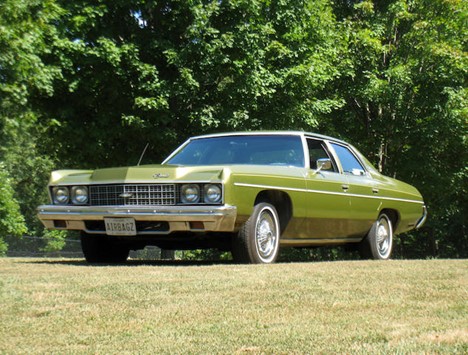 The Chevy Impala ACRS is not the prettiest car on this list (one could argue the opposite!). It doesn’t have the most features or the best restoration. What makes this car so incredibly rare is the circumstance behind its creation.

The ACRS or Air Cushion Restraint System was the first airbag system developed by GM. The 1973 Impala used an instrument panel setup from an Oldsmobile (complete with a four-spoke steering wheel and hub) to contain the airbags. They were installed on both the driver’s and passenger’s side in 1,000 Impalas. They were all painted pea soup green.

Here’s the thing though. For one reason or another, all the ’74 ACRS Impalas have disappeared. The system moved to Buick, Cadillacs, and more, but not in these Chevies. The single known ACRS Impala was restored and displayed for us to appreciate, making it one of the rarest Impalas in the world, valued at $90,000.

The main reason these cars no longer exist is that GM used them as crash testing vehicles for the airbag system. The other 999 cars might have all been crushed and thrown out, for all we know. 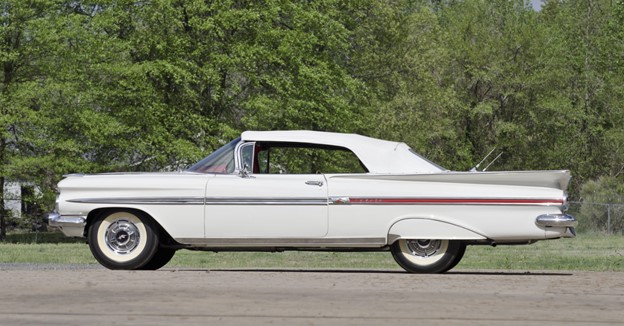 The Chevy Impala Convertibles were not made in huge supply and most of them are in poor condition. However, a ’59 convertible went up at a Mecum auction in 2012. It was a beautiful Snowcrest white model with a ton of deluxe accessories. These included a four-speed manual transmission, power brakes and steering, fender skirts, HD generator, and Tri-Power intake.

Its final price was $110,000. It still had the red-lined interior and full wheel covers on the classic wide whitewalls.

This car won the Antique Automobile Club of America’s First Prize back in 1998. 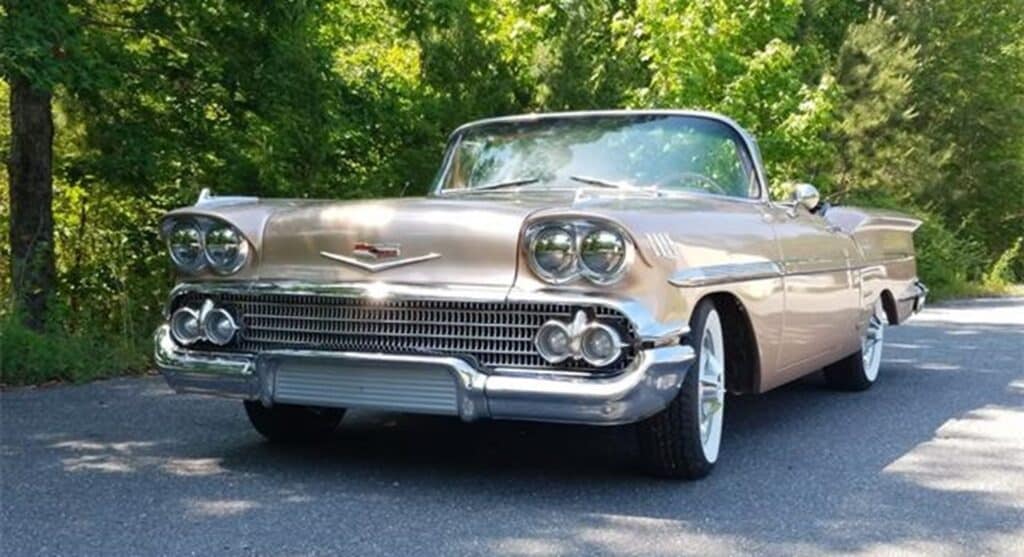 A surviving Chevy Impala Convertible can fetch a handsome auction price when restored properly. We found this one on Classic Cars, in good enough condition that the owner is asking $124,000 for it. This puts it in the upper echelon of rarity when it comes to Chevrolets, probably owing to the extent of its restoration.

This convertible has a freshly rebuilt powerglide automatic transmission, front disk brake conversion, and rebuilt 348W engine. The whitewall Rallye wheels look as good as they ever have. In this condition, a ’58 convertible represents one of the rarest Impalas today.

The 1958 Impala convertible was a huge-selling car for Chevy, especially sporting the popular Arctic White color scheme. 181,000 of these cars left the lots. Some with deluxe features such as air conditioning and power steering probably sold for upwards of $3,000. However, it’s important to note that of those 181,000 cars, 125,000 were the popular two-door hardtop models. This makes the convertibles extra rare, hence their price today. 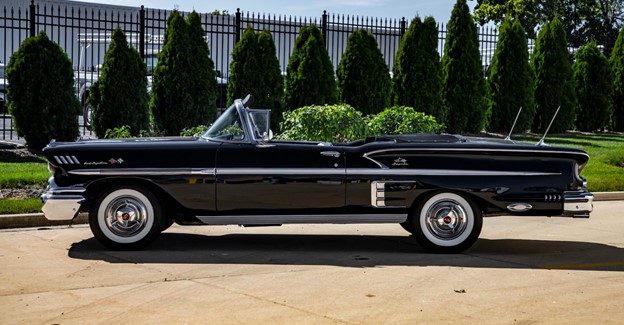 In the late 50s, the Bel Air line-up introduced the Impala Rochester for users that wanted attractive style modifications on a lower budget. It had a Blue Flame inline-six that really powered up on the open road. They were incredibly strong, souped up with a W-Series V8 Turbo Thrust engine that could get up to 315 hp when pressed hard enough.

With a Ramjet Fuel Injection, the Rochester was able to equally mix the fuel-air distribution between its cylinders. These “Fuelies” sold for a whopping $484, which compared unfavorably to similar models of the time. This has made them rarer today. A Fuelie convertible like this one can now sell for $146,000 or more at auction.

This car debuted the X-frame Chevies, which some users have described as 5-star nightmares and others have described as an unusual beauty. Chevy only sent out these frames between 1958 and 1964. Instead of a conventional perimeter-style frame, these frames had end-sections connected down the center with a rigid driveshaft. These frames allowed Chevy to mount the frames about 4 inches lower to the ground, which further emphasized the long, low-riding designs that were popular at the time. 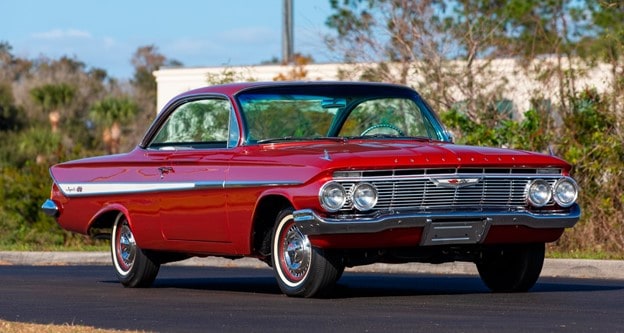 The SS or Super Sport debuted as a mid-year option in all Impala styles. The Super Sport model upgrade included trim outside and in, power steering, reinforcements to the chassis, power brakes, metallic brake linings, and improved tires.

Buyers had a choice of three different 348 engines, one of which could make it up to 350 hp. However, the really famous SS was the 409, listed here. The Turbo Fire 409 engine was a stroked and bored 348 that came with a Carter carb, solid-lifter cam, aluminum intake, and incredible 11.25-to-1 compression ratio. The version with a 4-speed manual transmission can now sell at auction for up to $185,000.

In 1961, just 456 Chevy Impalas were commissioned as SS packages. However, only 142 of them were actually built with the 409 engine, which drives its rarity in the modern day. This particular car was a display car at the 8th Annual GM Nationals, making it even more valuable. 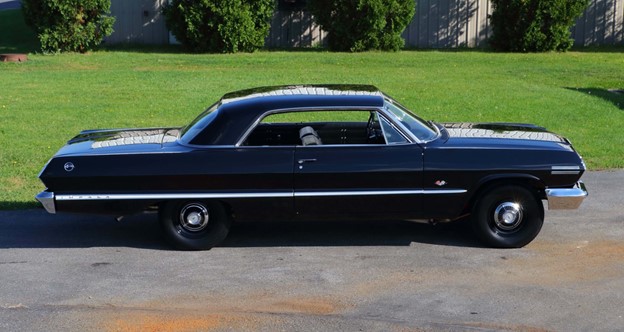 The rarest Impala is the Chevy Impala Z11. The Z11 was created for special competition racers, many in NASCAR. This car featured a W-Series V8 engine derived from the 409. It had a two-piece aluminum intake, dual four-barrel Carter AFB carbs, and a unique cowl induction system coined the “cold air.” The engine pushed out 430 hp of performance and an insane 575 lb-ft of torque.

To compete as a racer, the Impala Z11 was built mainly from aluminum to save weight. The fenders, bumpers, hood, brackets, grille, braces, and even the hood support were all aluminum, resulting in 300 pounds of weight reduction for these races. This one sold at a Mecum Auction for a staggering $432,000.

Due to its status as a competition car, the Z11 lacked many user features that modern buyers should be aware of. Therefore, the Z11 has no radio, front sway bar, sound deadener, or even a heater.

The Chevy Impala was a popular car in its day, now prized for its gorgeous, low-riding length and deluxe interiors. The rarest Impalas in the world can cost nearly half a million dollars. However, we prefer to admire them from afar. Just as pretty – way less expensive.

10 of the Rarest Minecraft Skins You Can Find