8 Most Expensive Acoustic Guitars Ever Sold

No matter how far guitars have advanced, there’s something homey and authentic about acoustic guitars that keeps their appeal alive long after electric technology has tried to replace them. The most famous of these guitars were owned by specific musicians or built to such exacting specifications that they’re both musical instruments and works of playable art.

Continue reading to learn about the 8 most expensive acoustic guitars in the world, including some that you can still buy for a huge premium as well as those that have sold for millions at high-value auctions celebrating the founders and innovators of acoustic music. 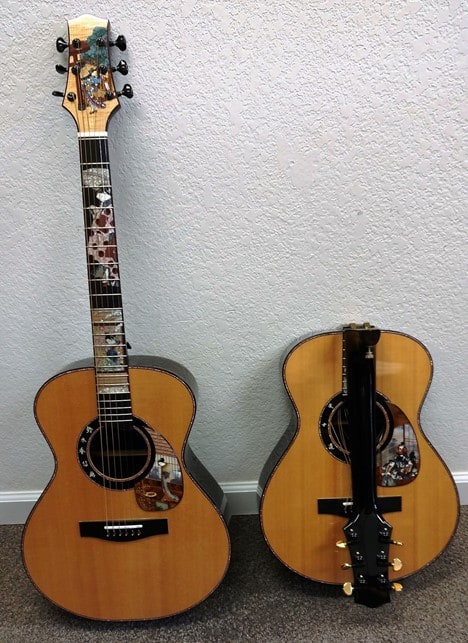 The Geisha Inlay Art Guitar is a strange one on this list. Rather than a vintage guitar owned by a famous musician, this guitar is brand new, made as a piece of musical art by Harvey Leach. This and its sister piece, “The Samurai,” are being sold right now on Reverb for $110,000, making them the lowest entry on our list of the most expensive acoustic guitars but respectable pieces of playable modern art. 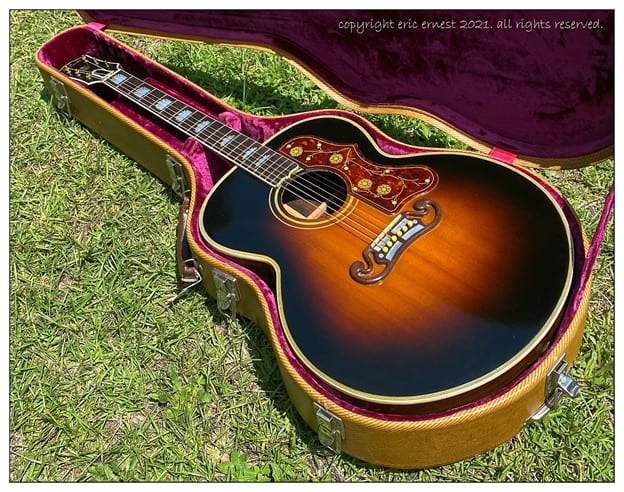 This vintage Gibson J-200 is a model that Gibson itself called “King of the flat-tops.” While it doesn’t have a documented famous owner, this guitar has been played for over 40 years by various blues singers and musical cowboys. Its incredible construction, including the rare woods that went into it, drives up its price today since these early models were more luxurious than the later ones.

Back in 1940, these guitars were made from rosewood and red spruce with a sunburst finish. The sound is absolutely incredible. The current asking price for this guitar is $169,995.

This guitar is more commonly known as the Super Jumbo 200. The early rosewood ones were immediately limited in production and highly valued by musicians and collectors. 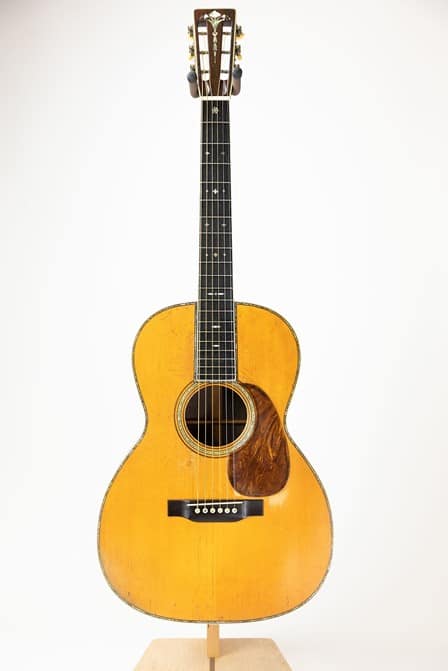 Tied for the oldest guitar on this list, this 1930 Martin 000-45, serial number 42717, is a beauty. The now-venerated C.F. Martin Guitar Company put out this incredible guitar in its first year of operation to kick off what is now called its golden era, which lasted through the Depression until after WWII. The guitar put up for sale here was owned by Norman Blake. It’s the guitar he used to play Chattanooga Sugar Babe and the one that Martin Guitars featured in a classic issue.

The nice thing about this listing is that it claims to have documentation certifying its famous ownership, as well as the original hard case for this amazing instrument. It’s listed for $220,000, plus $100 shipping.

Norman Blake, b. 1938, has a neo-traditionalist style that emphasizes blues and country styles in acoustic songs. Many of his most famous include acoustic transpositions of fiddle tunes like “Fiddler’s Dram,” “Slow Train Through Georgia,” and “Ginseng Sullivan.” 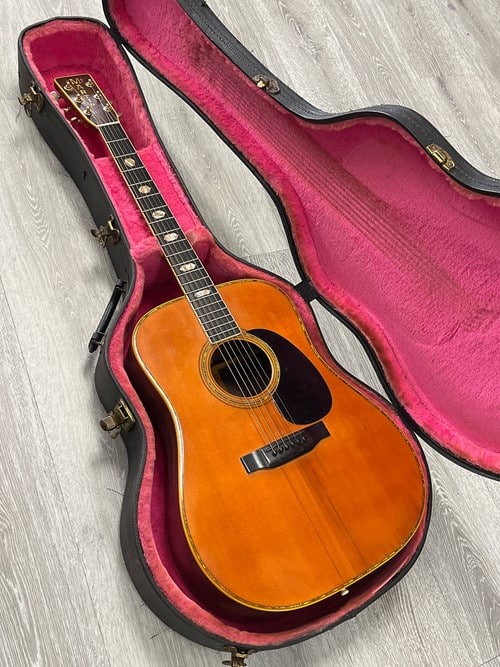 Vincent Romano of Pop Tronics owned this guitar since 1972 until it was bought by the current owner, who has put it up for auction on the website, Reverb. Romano told the new owner that he was gigging in the Central Park area in New York City in 1974 concurrent with the March of the Dimes fundraiser. According to Romano, he met Harry Nilsson and John Lennon for drinks (he ordered them but they refused them). Before leaving, Lennon complimented this Martin D-41 Natural, strummed it a bit, and signed it, according to Romano.

This makes this Martin D-41 Natural the first of two guitars on this list sold on the back of Lennon’s name, with his personal guitar appearing much later. This beauty is currently on sale online for $359,694.43.

The seller admits that without any official documentation, the guitar cannot be valued for the signature. However, as the flagship Martin guitar from 1972 in excellent condition, he argues that it’s still worth the asking price. It’s not surprising considering how many epic names in guitar playing found their legs on a Martin D-41, including Bob Dylan, Eric Clapton, Paul Simon, and more.

Tied for the oldest guitar on this list is this Martin OM-45 Deluxe owned by none other than Roy Rogers! If you don’t know who that is, probably because you’re younger than 80, Roy Rogers was a famous movie and television cowboy, known as the cowboy King throughout his career in the 30s-50s, which encompassed over 100 films, radio plays, and more. His horse, a golden Palomino named Trigger, is almost as famous as he is.

Only 11 of these guitars were ever made, so the most famous of them would naturally sell for a bundle. It sold for $460,000 at an auction set up by the Roy Rogers-Dale Evans Museum.

Leonard Slye bought this guitar from a pawn shop in California in 1933 for $30. Slye later created the stage name Roy Rogers and became the world’s most famous singing cowboy with it. 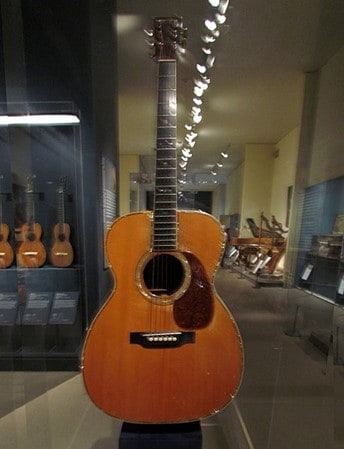 This vintage 1939 Martin 000-42 was played by Eric Clapton in his most famous performances. It is arguably the most well-known single guitar in the acoustic world. It’s the exact guitar on which Clapton played the record session for MTV Unplugged, which featured 17 of his most famous songs, including “Layla.” That session went on to win six Grammy Awards and became his best-selling album ever, selling 26 million copies around the world.

Not only was this guitar Clapton’s favorite to perform on but it was also known as his guitar of choice at home. This C.F. Martin & Co. guitar is made from Brazilian rosewood and Adirondack spruce. It sold for $791,500 at a Christie’s auction in 2004, which is about $1.2 million in today’s money.

The new owner of this amazing guitar lent it to the Cleveland Rock and Roll Hall of Fame Museum for display. He then sent it to the Metropolitan Museum of Modern Art in New York for an exhibition on American guitars. Only 113 pre-WWII Martin 000-42 guitars are known to exist. The design, which includes a 14-fret neck and short body, is well-known for making the guitar more accessible for faster players. 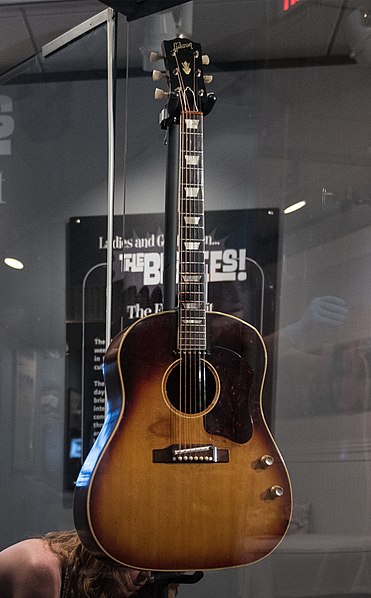 The Gibson J-160E is an acoustic-electric guitar, meaning it has the physical structure and acoustic resonance of an acoustic guitar but can also be plugged into certain amps like an electric guitar. This particular Gibson J-160E model was owned by John Lennon, which drove up its price to insane levels, well beyond what the guitar alone would have garnered at auction.

That doesn’t mean the guitar isn’t pretty in its own right! Its Sunburst spruce finish has a charm all its own only amplified by the knowledge that this is the guitar on which “I Want to Hold Your Hand” and “I Saw Her Standing There” were composed. It was sold at a Julien’s auction for $2.4 million to an anonymous buyer.

Brian Epstein, best known as The Beatles’ manager, bought two of these Jumbo Gibsons, one for George Harrison and the other for Lennon. The latter was considered lost for 40 years after the band’s roadie, Mal Evans, accidentally left it at a holiday concert venue in London. However, it was eventually recovered and sold for this record amount. 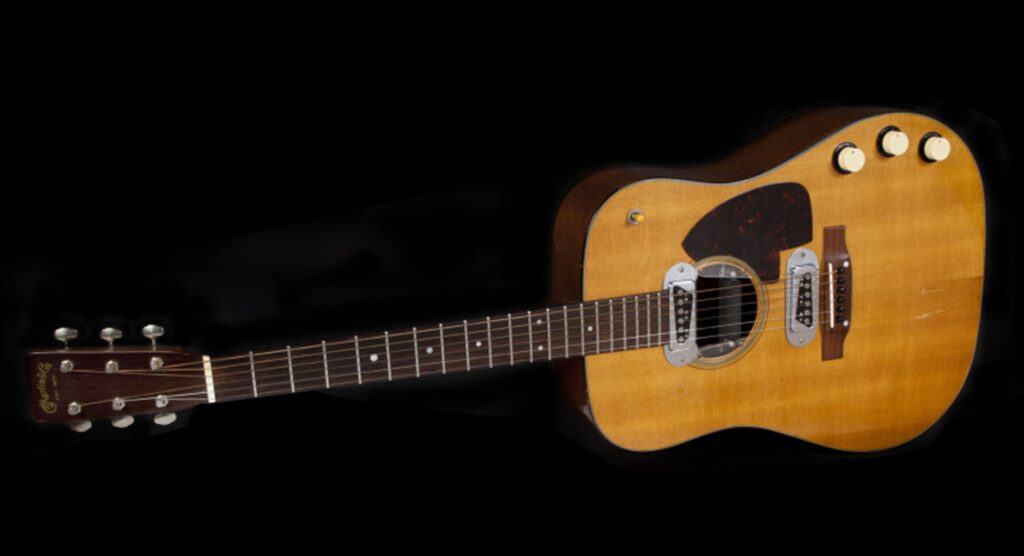 The most expensive guitar is the Martin D-18E. This acoustic guitar was owned by Kurt Cobain of Nirvana and was played by him at his famous New York concert for MTV Unplugged. Cobain changed alt-rock forever on this guitar, making this one of the music world’s most recognizable and influential instruments in addition to being the most valuable guitar of any kind (not just acoustic) in the world.

This amazing guitar sold at a Julian’s auction for just over $6 million in 2020. It’s made from mahogany with a couple made from authentic Sitka spruce, which gives it an even more resonant sound, full of warmth and clarity. But no one bought this particular guitar to play it! They bought it to own some history.

The new owner of this incredible instrument is Peter Freedman, an Australian business mogul and the owner of RØDE Microphones.

Acoustic guitars have a natural, nostalgic feeling that has never quite been matched by their successors. Collectors highly value these 8 amazing guitars for a reason, whether for their incredible construction or famous owners (or both). Owning these guitars is expensive, but at least viewing them is free!

8 of the Most Expensive Cuts of Steak Available