The first Super Bowl took place in 1967, although it was originally called the AFL-NFL World Championship. The Packers crushed the Chiefs 35-10 and tickets cost $12 — about $90 today.

Around 24 million people watched the first Super Bowl on TV. That’s a lot, but it’s nothing compared to today. In recent years, it’s been common for more than 100 million viewers to gather in living rooms across America and watch the show.

As the Super Bowl gets more popular, tickets get more expensive. Tickets to the second Super Bowl cost about $87 in today’s money. By the early 2000s, that price jumped to more than $800. At the same time, in-person viewers have significantly increased.

Pictures of the first Super Bowl show a largely empty stadium — compare that to Super Bowl 50 when more than 70,000 fans packed into Levi’s Stadium in California.

Today, Super Bowl tickets easily sell for thousands of dollars. The average price in 2018 was $2,500, but that’s still cheap compared to the most expensive tickets on record. Believe it or not, some people spend more than 10 grand to get a seat.

Keep reading to learn more about the most expensive Super Bowl tickets in history! 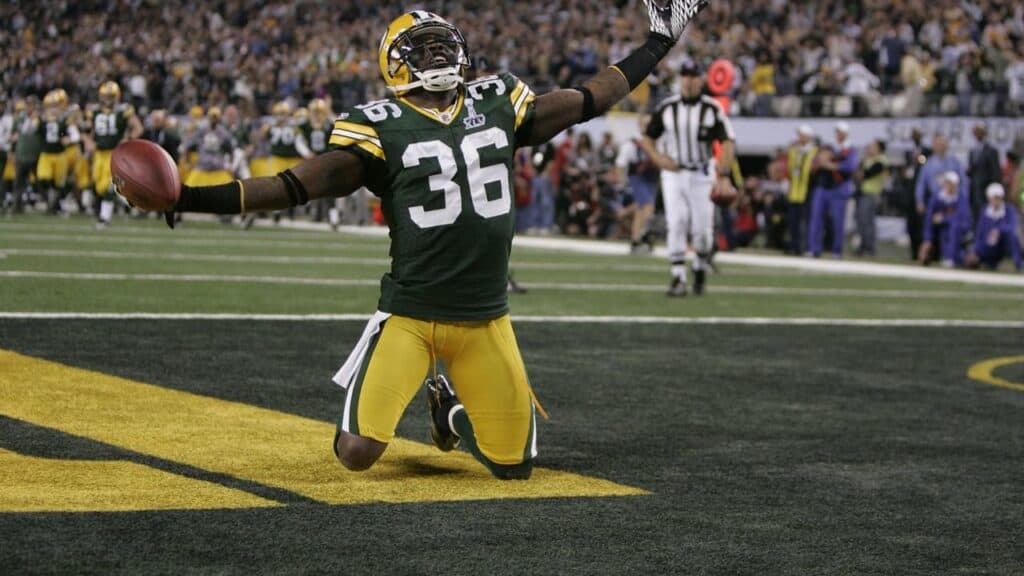 Would you pay three grand to get a seat at the Super Bowl? Packers and Steelers fans would. The 2011 Super Bowl had an average ticket price of about $3,600 while the highest prices that year reached nearly $5,000. The event was held at AT&T Stadium in Texas (formerly Cowboys Stadium). The Packers ended up grabbing a solid victory with a final score of 31-25.

Beyond the game, Super Bowl XLV’s halftime show was pretty interesting. After ziplining onto stage, the Black Eyed Peas performed their hit “I Gotta Feeling” before transitioning to a combination of “Boom Boom Pow” and Guns N’ Roses’ “Sweet Child O’ Mine.”

Before the game, Christina Aguilera performed the American national anthem. 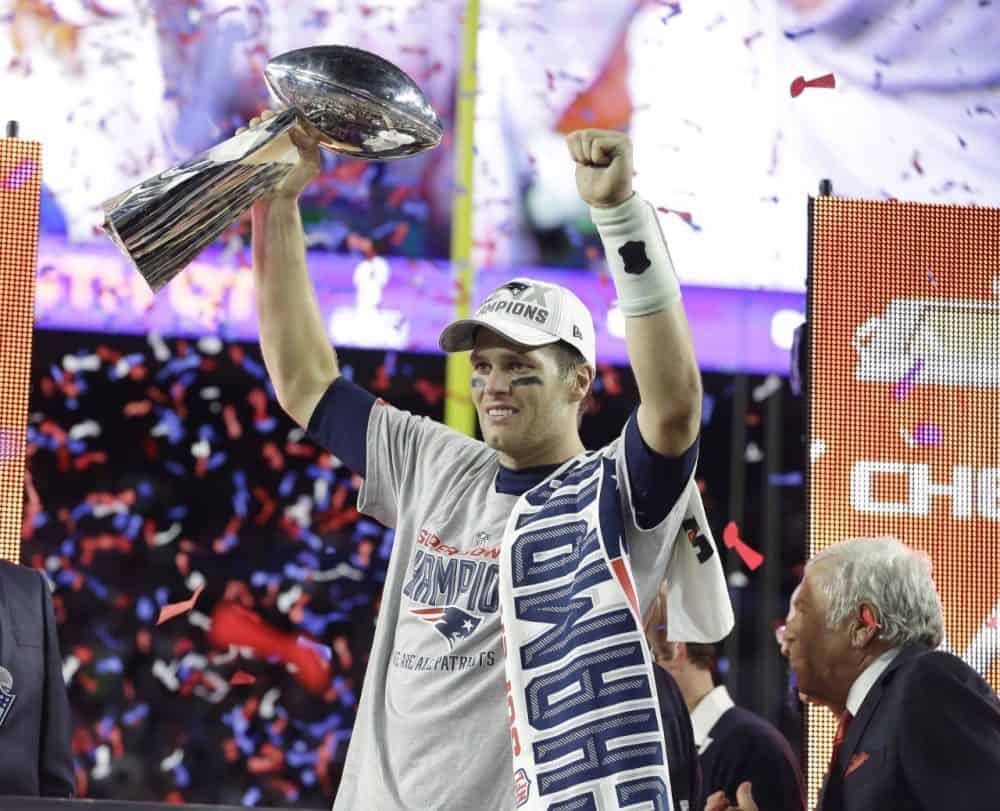 Tom Brady is kind of a hallmark of the Super Bowl. The star quarterback has won a whopping seven games as of 2022 — but that number could grow since he un-retired in March of the same year.

For Brady, Super Bowl XLIX was yet another win in his collection. The Seahawks held a 10-point lead in the third quarter, but the Patriots stepped it up and won 28-24. That was good news for Patriots fans in the stadium. One estimate says the average seat cost more than $10,000 — imagine paying that much to see your team lose.

Katy Perry headlined the 2015 Super Bowl halftime show with special guests including Lenny Kravitz and Missy Elliot. The show started with Perry on a massive lion prop as she performed “Roar” before closing out with “Firework” as she was hoisted above the stage and fireworks were set off. 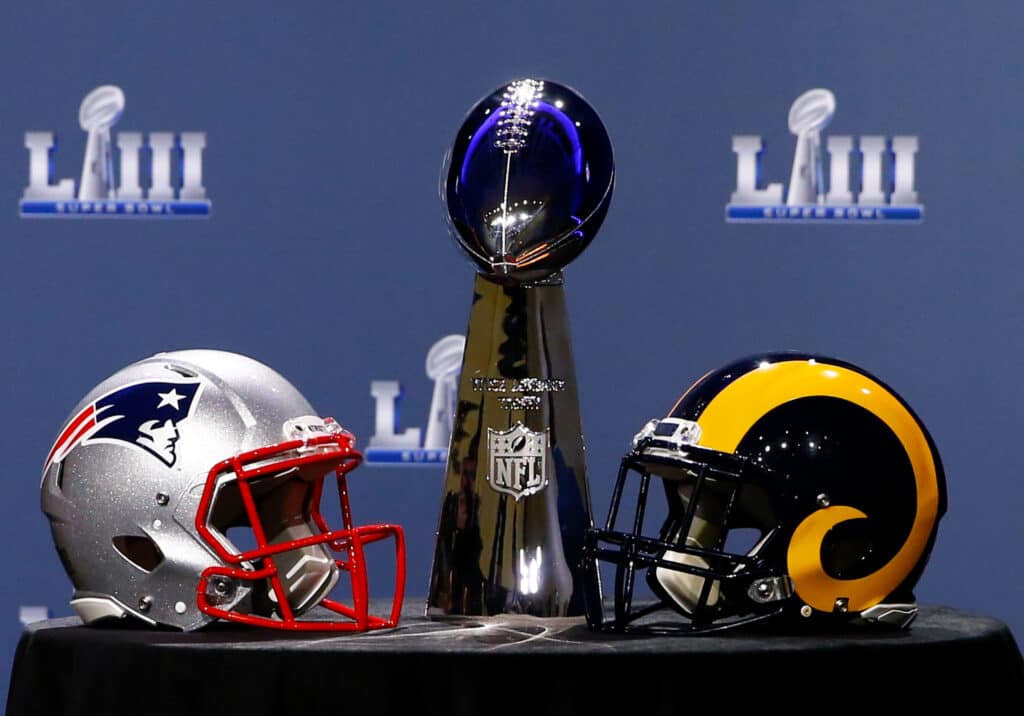 Super Bowl LIII was held in Atlanta in 2019. The game was between the Patriots and the Rams, with the Patriots demanding victory 13-3.

Tickets to Super Bowl 53 were crazy expensive. The event’s cheapest seats cost about $2,500 while the highest prices reached a steep 23 grand. Costly tickets didn’t stop fans though, the stadium was packed with more than 70,000 attendees while about 98 million people watched from home.

As of 2022, Super Bowl LIII is the lowest-scoring Super Bowl in history. 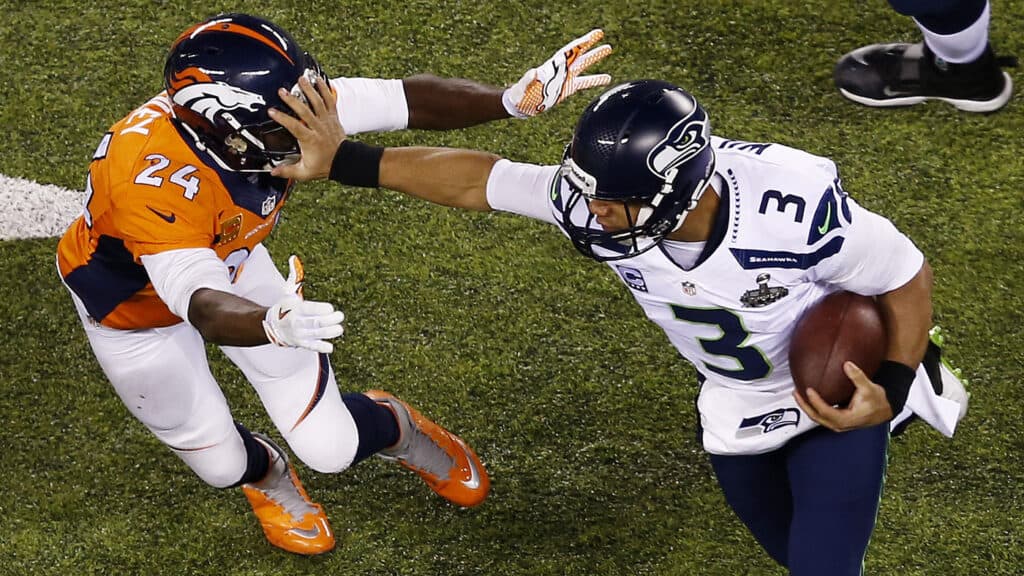 Super Bowl XLVIII was special for a couple of reasons. The game was the Seahawks’ first Super Bowl victory, but it was also the first time a winning team surpassed 40 points while the losing team stayed under 10. The historic game also marked the Broncos’ fifth Super Bowl loss.

Super Bowl XLVIII was historic for another reason: ticket prices. The game’s most expensive tickets sold for a whopping $25,500, making it the fifth-most expensive Super Bowl in history. 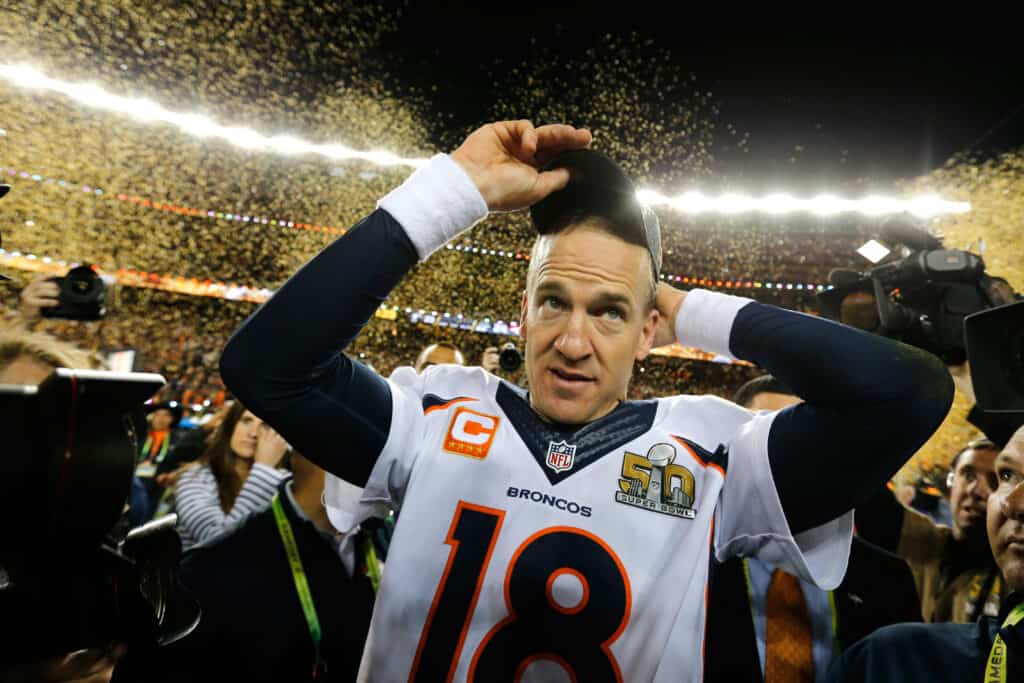 Super Bowl 50 was held in 2016 at Levi’s Stadium in California. The historic match between the Panthers and the Broncos attracted more than 71,000 attendees and upwards of 111 million TV viewers.

Coldplay, Beyoncé, and Bruno Mars performed the halftime show before the game resumed and the Broncos beat the Panthers. The win was Peyton Manning’s second Super Bowl victory. Manning retired shortly after the match and was inducted into the Pro Football Hall of Fame a few years later.

When it came to ticket prices, Super Bowl 50 was predictably expensive. The game’s cheapest seats surpassed five grand, about a thousand dollars higher than the previous year, while the highest prices on record neared $30,000. 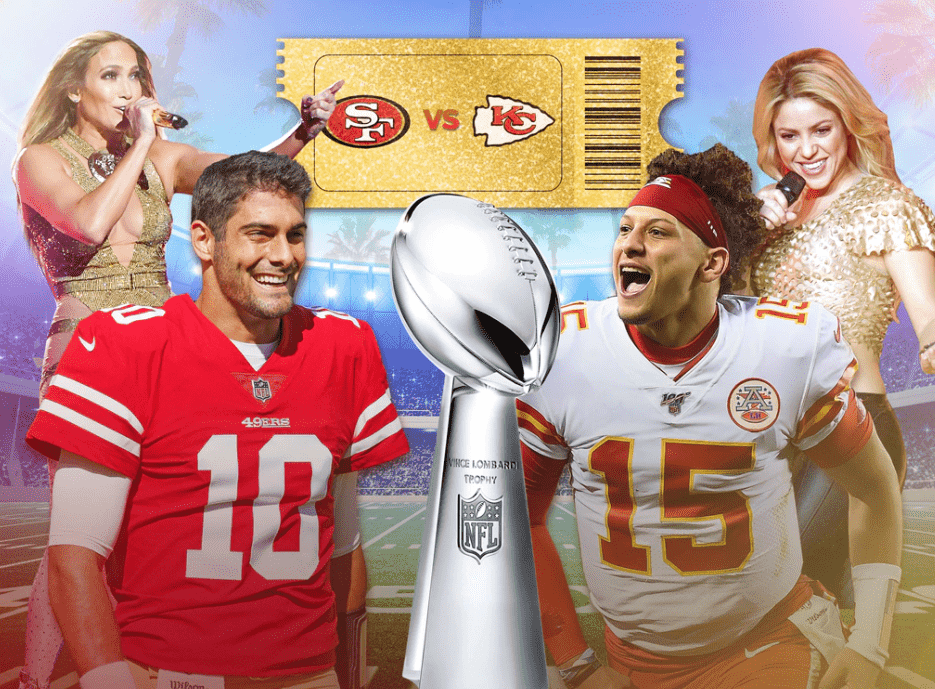 Heading into the top three we’ve got Super Bowl LIV. The match between the 49ers and the Kansas City Chiefs was held at the Hard Rock Stadium in Miami Gardens where more than 60,000 fans paid thousands to get a seat. The event’s cheapest seats sold for at least $4,000 while the most expensive tickets went for $29,000.

Super Bowl LIV ended with a Chiefs victory — 31-20. The game’s first two quarters were pretty tight, tying at 10 when halftime rolled around. After halftime, it looked like the 49ers might come out on top, but the Chiefs pulled ahead and won.

A 30-second ad during Super Bowl LIV cost $5.6 million. Companies are willing to pay crazy amounts for ad placement during the Super Bowl because so many people watch the event. Experts say Apple started the trend of high-budget and unique Super Bowl ads with its 1984 commercial for the original Macintosh personal computer. 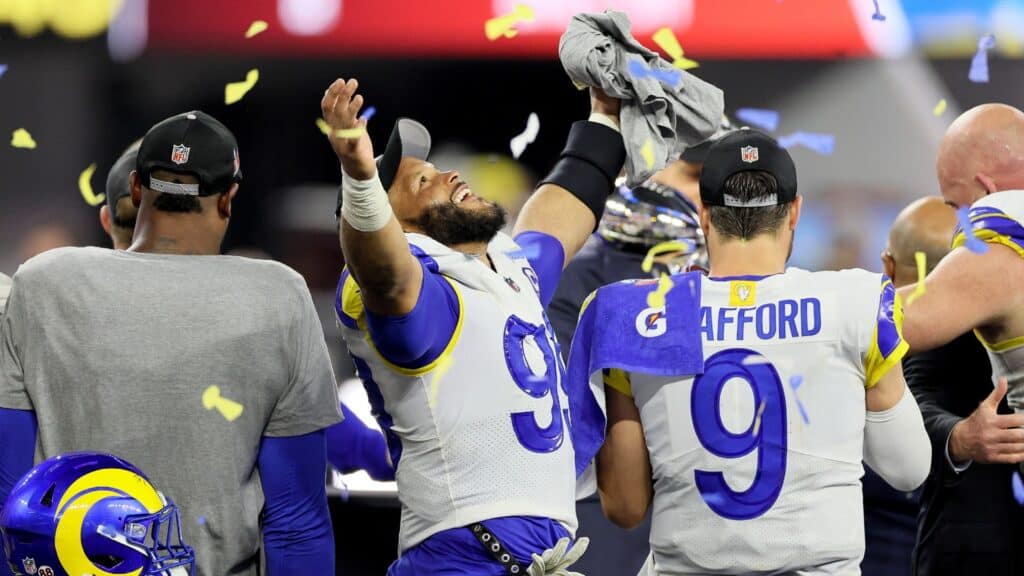 With such excitement for the game, Super Bowl LVI ticket prices were sky-high. The most expensive seats on record went for more than $70,000 while the cheapest cost at least four grand. 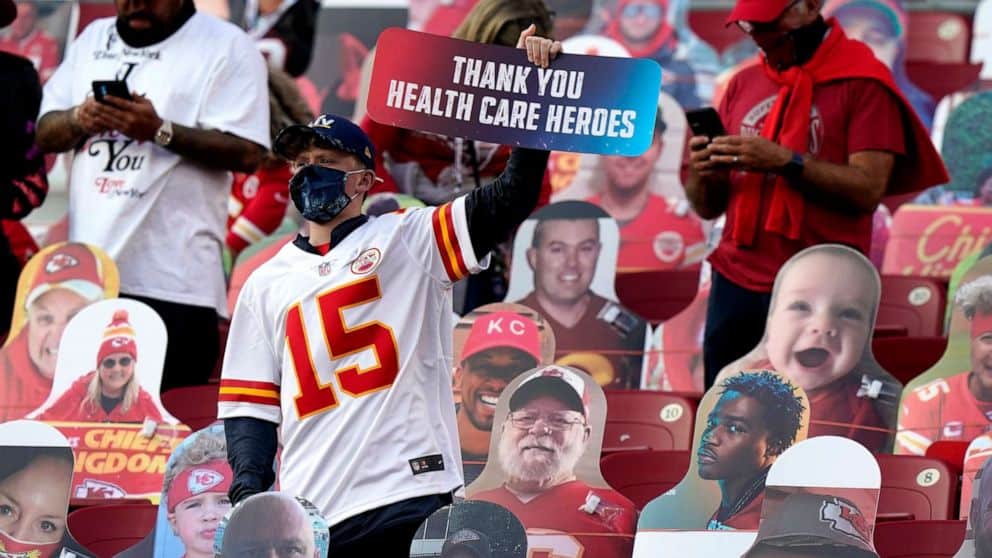 As of 2022, Super Bowl LV had the most expensive Super Bowl tickets ever sold.

Like a lot of things, Super Bowl LV was thrown off by the COVID-19 pandemic. The game was the first Super Bowl to take place after the official start of the pandemic, so the event looked pretty different than previous years. Only about 24,000 fans were allowed in the stadium — a huge drop compared to the typical 60 to 70 thousand.

Many of these fans were healthcare workers who received free seats from the NFL. Other attendees were fans who paid a lot of money for their spots.

The most expensive ticket on record cost a whopping $73,839 while the average price stood at more than 11 grand.

During Super Bowl LV, the NFL decided to fill empty seats with cardboard cutouts of fans. Some TV viewers were confused and thought the stadium was full until an NFL spokesperson clarified that the “attendees” were really just cardboard.