One of the greatest basketball players in history is LeBron James, a four-time NBA Champion, four-time NBA MVP, four-time NBA Finals MVP, and two-time Olympic gold medalist. James started his career in 2003 after getting drafted into NBA for Cleveland Cavaliers.

His rookie season is recognized as one of the best, something that hasn’t been seen in almost twenty years or since another great player Michael Jordan. With success comes fame, and with fame come fans who wish to have enough memorabilia of a player to celebrate his game.

And while autographed jerseys, sneakers, and photos can be a great addition to anyone’s collection, sports cards are some of the most valuable items to hunt for. Starting with his rookie career, his best basketball moments, and best score-games throughout his career of two decades, James has some of the best and most diverse cards in the game. 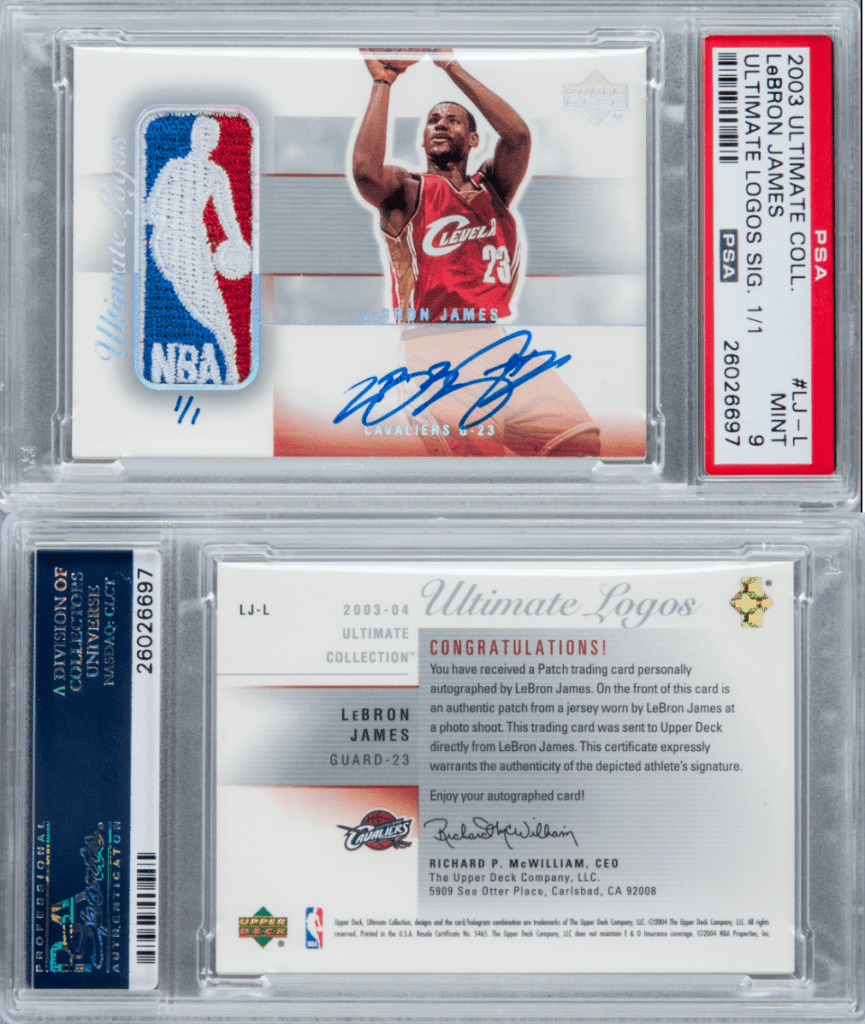 Older basketball cards, or any sports for that matter, usually cost more due to the history, the season, or the player on the card. The same might go for LeBron James, but his Rookie cards are especially sought-after due to his accomplished rookie season with Cleveland Cavaliers.

The card has a patch from his Cleveland jersey and the blue-inked signature dating back to his beginnings. With everything mentioned, it’s important to note that this card is a single issue, with only one existing worldwide.

NBA Finals MVP’s card was sold for $312,000 by Goldin Auction House in 2016. The card was graded 9 PSA, in almost mint condition, saved for twelve years since the production. 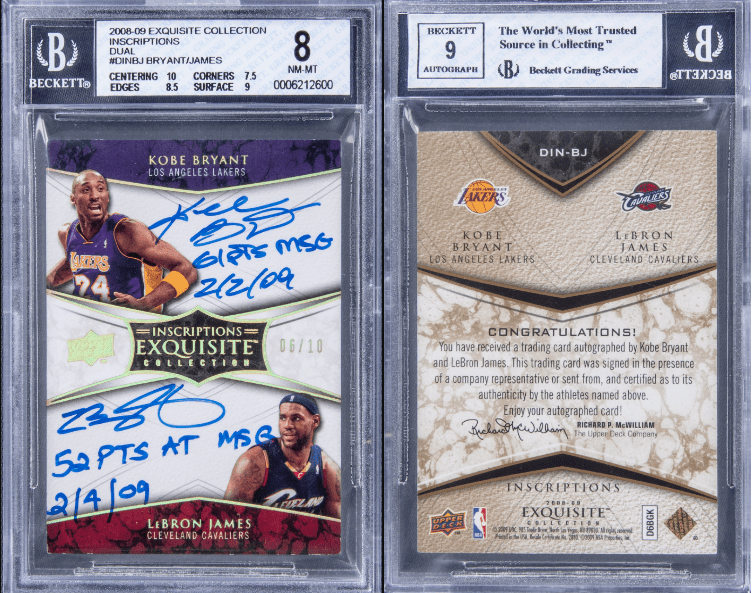 The only “shared” card on this list is this one from the 2008/09 Exquisite Collection. The card is unique and rare because it offers two signatures instead of just one – Kobe Bryant, a legend from the Los Angeles Lakers, and James, during his last season with the Cleveland Cavaliers.

“Two of the most impressive performances in Madison Square Garden” card was sold for $337,200 at the 2021 March Premium Auction by Goldin Auction House. The certificate on the obverse side shows the card’s authenticity, as it was signed by the two players in the presence of the company’s representative.

Below their signatures, Bryant added “61 PTS MSG” and “2/2/09” because he made a record with a 61-point performance, while James inscribed “52 PTS At MSG” and “2/4/09” celebrating his 52 points while playing in Madison Square Garden. 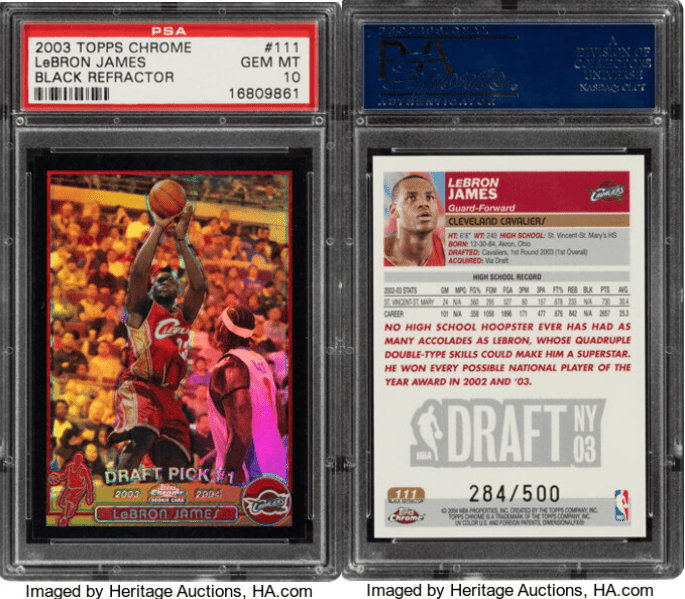 Topps Chrome Black Reflector card is not unique since the production was issued in 500 units. But one card, number 284 to be precise, was sold for $480,000 by Heritage Auctions in 2021. The black refractor card, in mint condition, was given a 10 PSA grading, which plays a big part in the value.

The set was released in 2004, featuring chromium, highlighted by a historic rookie class of Chris Bosh, Carmelo Antony, Dwayne Wade, and of course, LeBron James. Roughly 20 cards from this 500-card collection earned the desired PSA 10 grading.

Refractor cards cost more due to the reflective coating that displays a rainbow when the card is held at a specific angle. Basketball refractors cost more than regular cards, but baseball refractors are some of the most valuable cards of this type. 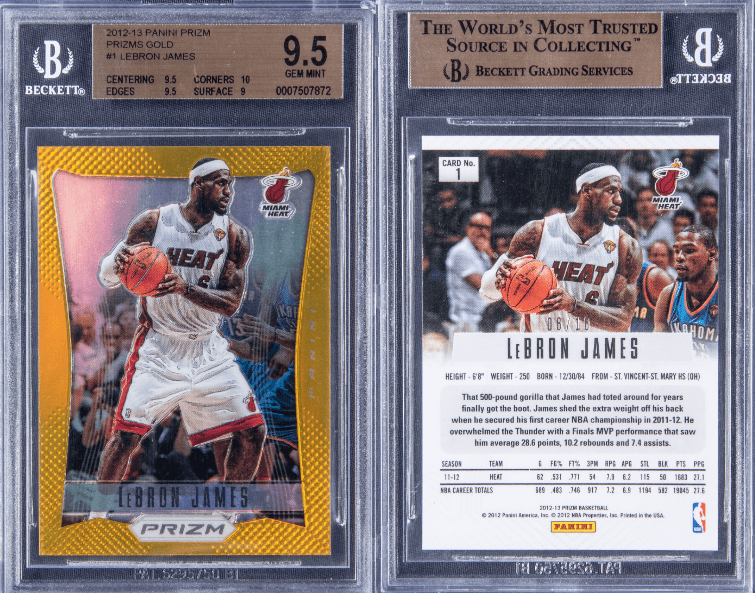 A part of the Panini Prizms Collection, this gold collectible card celebrated LeBron James’ 2012/13 season when he played for the Miami Heat as number six. He was named the NBA Champion and NBA MVP, had a 27-game winning streak, and was chosen for the All-NBA First Team all in a year.

Truly a golden season in his career, the card reflects his success through gold background, with only ten cards issued. Number eight sold for $571,200 at the Goldin auction in 2021. The card got a 9.5 out of 10 PSA rating, but their rarity and the issue year are what raise their value.

The obverse side of the card shows praise for James’ weight loss over the years, but what’s more important is his 28.6 average points, 10.2 rebounds, and 7.4 assists. The statistic also shows his NBA career totals – 19,045 points throughout 689 games. 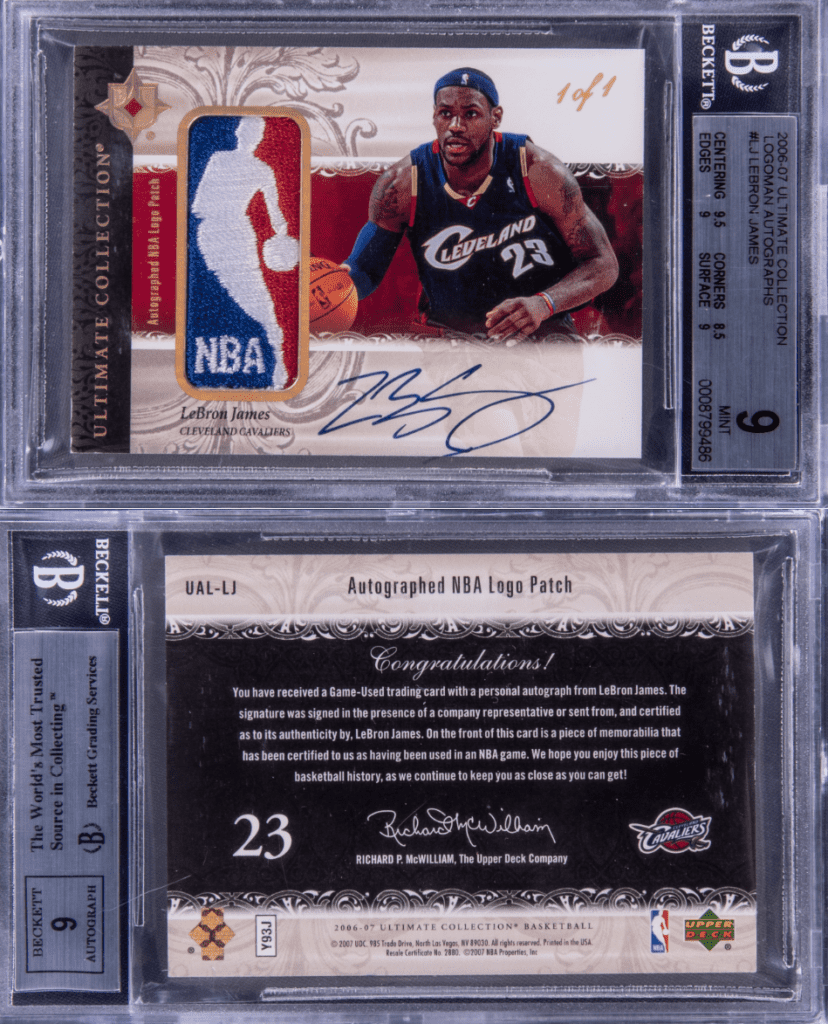 Graded 9 PSA in mint condition, this Ultimate Collection has the best two features a basketball card can have – an autograph and a patch from LeBron James’ jersey on the obverse side. The patch is from one of his Cleveland Cavaliers “23” jerseys, issued in the 2006/07 season, just when he rose to fame.

The certificate of authenticity is on the reverse side, where it was confirmed that James signed it in the presence of the company’s representative. The card is from a limited edition series, with only one card issued. It was sold for $690,000 by the Goldin Auction House.

Starting his career with the Cleveland Cavaliers, LeBron James led the 37th season of NBA basketball as the team’s forward. The Cavaliers finished the season in second place in the Central Division, with a 50-32 record. 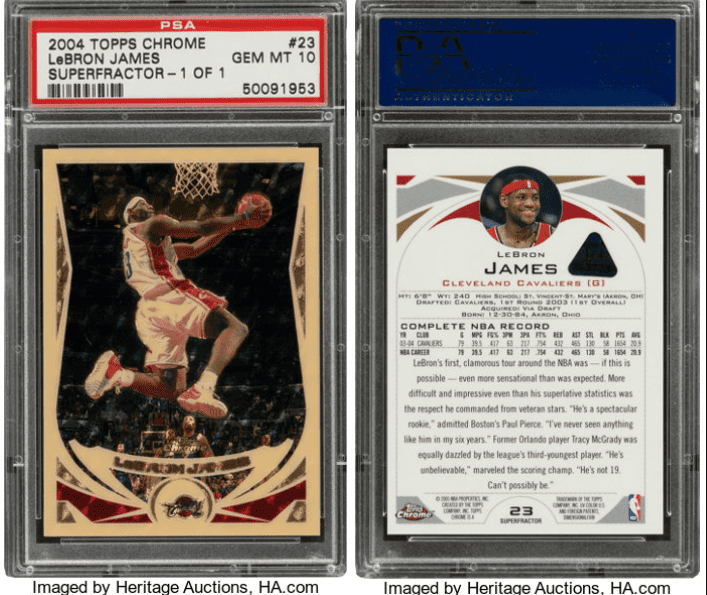 Basketball fans had started paying attention to his game, realizing that LeBron James would make history. And he did! Following his fantastic rookie year and Rookie of the Year Award, this 2004/05 card was featured by Topps trading company.

This Chrome Superfractor mint condition card was sold in 2020 for $720,000 by Heritage Auction House. Besides the 10 PSA Grading, the card has a reflective coating and an advanced swirl pattern over the obverse side. Superfractor cards are all limited to single-issue cards.

You can read a little bit of James’ history on the obverse side of the card, starting with his rookie biography and the complete NBA records. Even the experts were amazed by his skills, not believing he was a 19-year-old rookie from Akron, Ohio. 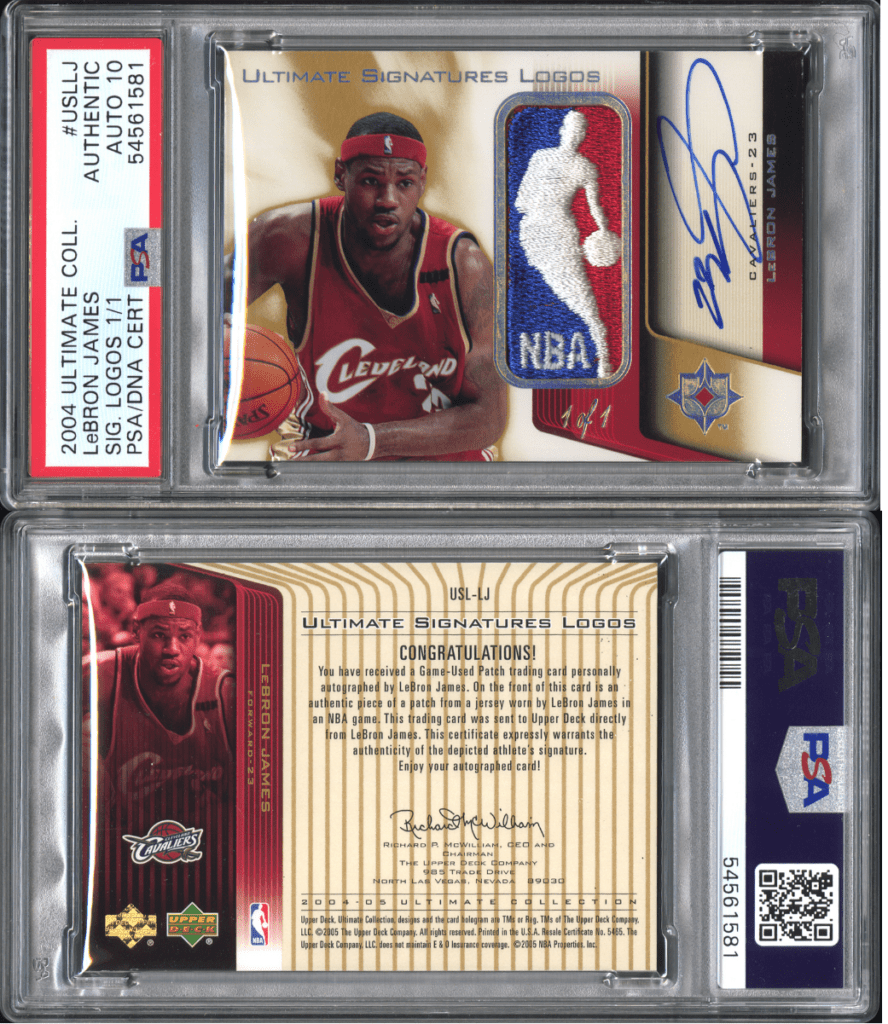 The next Logoman card on this list is the autographed LeBron James card from Upper Deck. The company created this single-issue card to celebrate James’ successful 2003/04 season when he became the first Cavalier player to receive the NBA Rookie of the Year Award.

This one-of-a-kind card features an authentic piece of a patch from his jersey as well as the blue ink signature from James. There is a certificate of authenticity on the reverse side of the card. The encapsulated card was given Grade 10 by PSA and sent directly from James to Upper Deck. 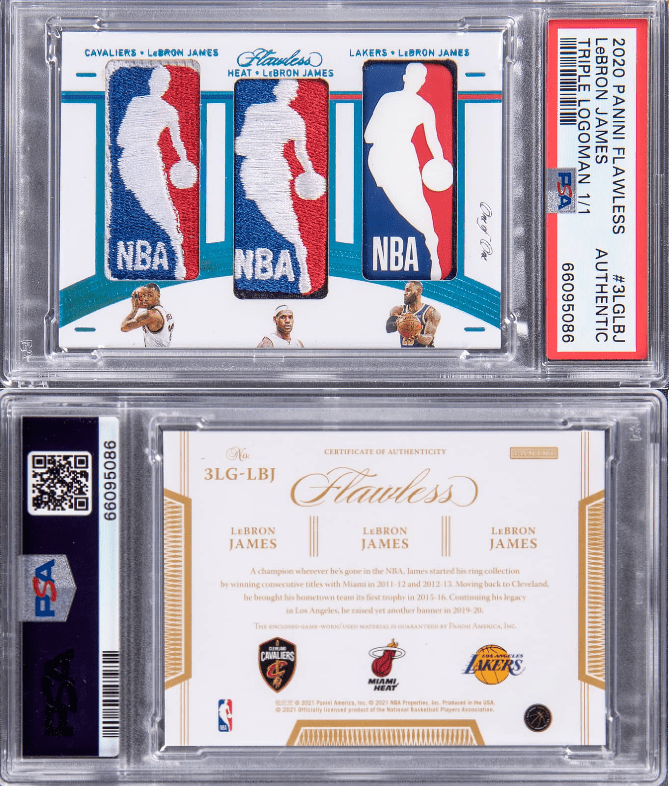 One of the most expensive LeBron James cards ever sold is also the youngest card on this list! Triple Logoman is a single-issue card, meaning the production is limited. Usually, older cards have more value, but this was the first card to be pulled and sold in the same year.

Issued by Panini, the Logoman card has three patches from jerseys James wore while with the Cleveland Cavaliers, Miami Heat, and Los Angeles Lakers – the card rarity is justified. Triple Logoman was sold for $2.4 million in June of 2022 to an anonymous buyer. 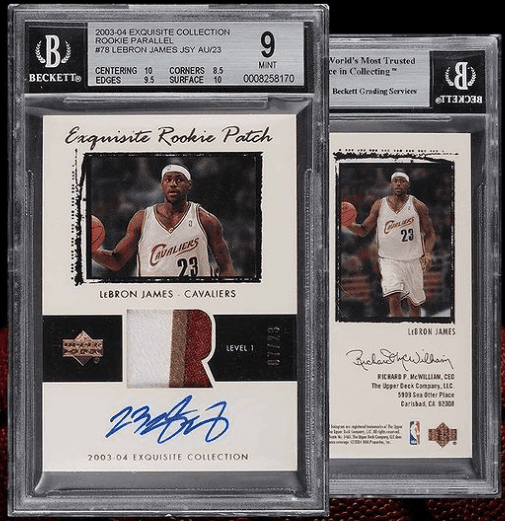 A record-breaking sale with the most expensive LeBron James basketball card ever was made in 2021 when the Rookie Parallel James card sold for  $5.2 million at a PWCC Market Auction. The Rookie Parallel card dates from 2003 to 2004 Upper Deck Exquisite Basketball collection.

The 2003 card production was limited to only 23 cards in the collection, all autographed by the Greatest. James’ vivid blue ink signature stands proudly on the obverse side of the card. Another mint condition card from this collection was sold for $1.2 million in July 2022.

The previous record for the most expensive basketball card was set in 2018 when an autographed Luka Dončić Panini National Treasures card went for $4.6 million. Luka Dončić is a Slovenian professional basketball player, currently playing for the Dallas Mavericks in the NBA.

12 Most Expensive Teeth Grillz in the World

8 Most Expensive Resorts in the World