In general, our skin is one of the most sensitive parts of our bodies and everyone has probably experienced some kind of mild skin irritation from time to time. Many skin diseases are common and some are even temporary. However, there are a number of skin diseases that are rare, chronic, and even lethal.

Nearly all of the rare skin diseases on this list have severe symptoms that aren’t really treatable. All of these skin diseases are unique and only affect a small percentage of the world’s population.

Number of People Afflicted Yearly (or Ever): Total number unknown; between 1 in 75,000 to 1 in 200,000 people in Europe
Area of Body Affected: Any skin exposed to sunlight and some types of artificial light; mostly the hands, arms, and face
Is it Treatable?: Yes 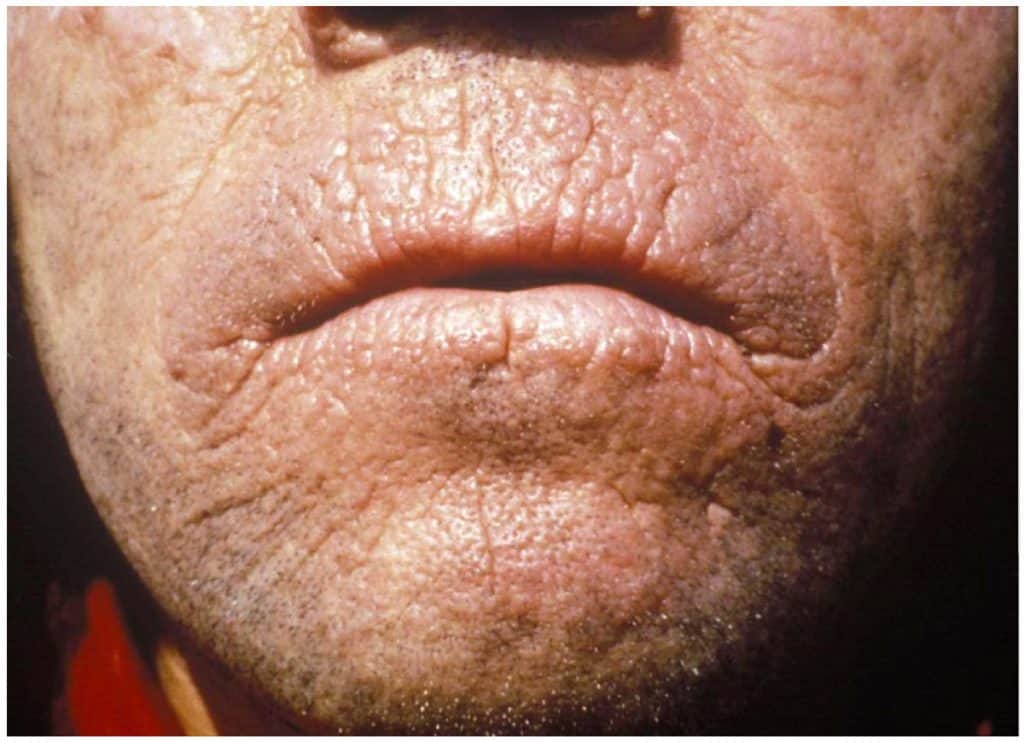 Erythropoietic protoporphyria (EPP) is a rare metabolic disorder that causes excessive amounts of protoporphyrin to accumulate in the bone marrow, blood plasma, and red blood cells. This causes the skin to react with severe pain when it is exposed to sunlight and some types of artificial light, like fluorescent lights. When people with erythropoietic protoporphyria are exposed to sunlight they will experience tingling, itching, and burning of the skin. Prolonged exposure can cause their skin to become swollen and red.

Number of People Afflicted Yearly (or Ever): Less than 1 in every 200,000 people
Area of Body Affected: Entire body but is concentrated around joints in areas such as the groin, armpits, the inside of the elbow, and the neck
Is it Treatable?: Yes 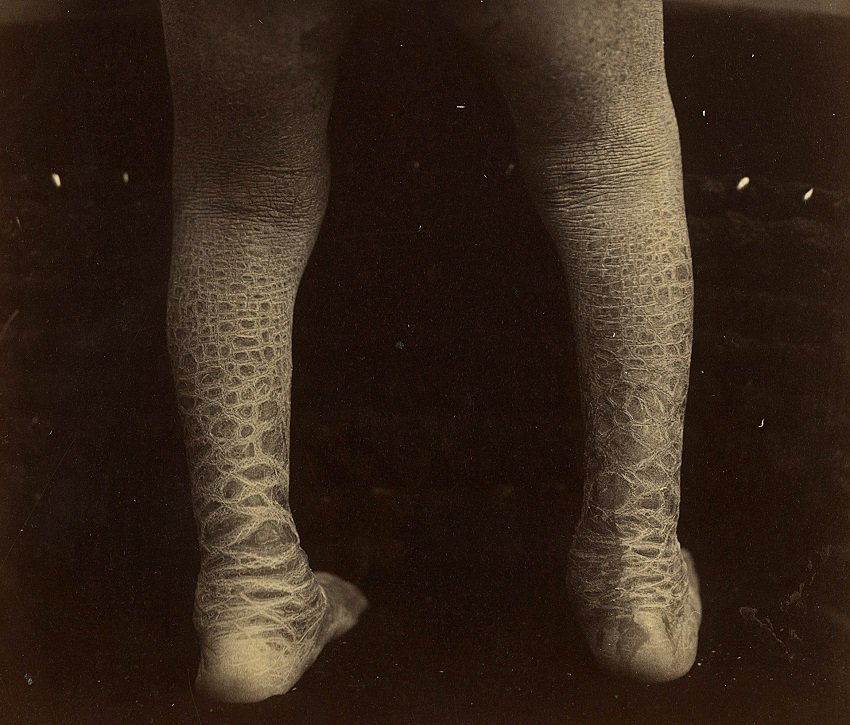 Number of People Afflicted Yearly (or Ever): 1 out of every 250,000 people worldwide; 1 in 1 million people in the U.S. and Europe; more common in Japan, North Africa, and the Middle East
Area of Body Affected: Areas typically exposed to the sun like the face, neck, arms, and legs; can also affect the eyes
Is it Treatable?: No, but symptoms can be managed 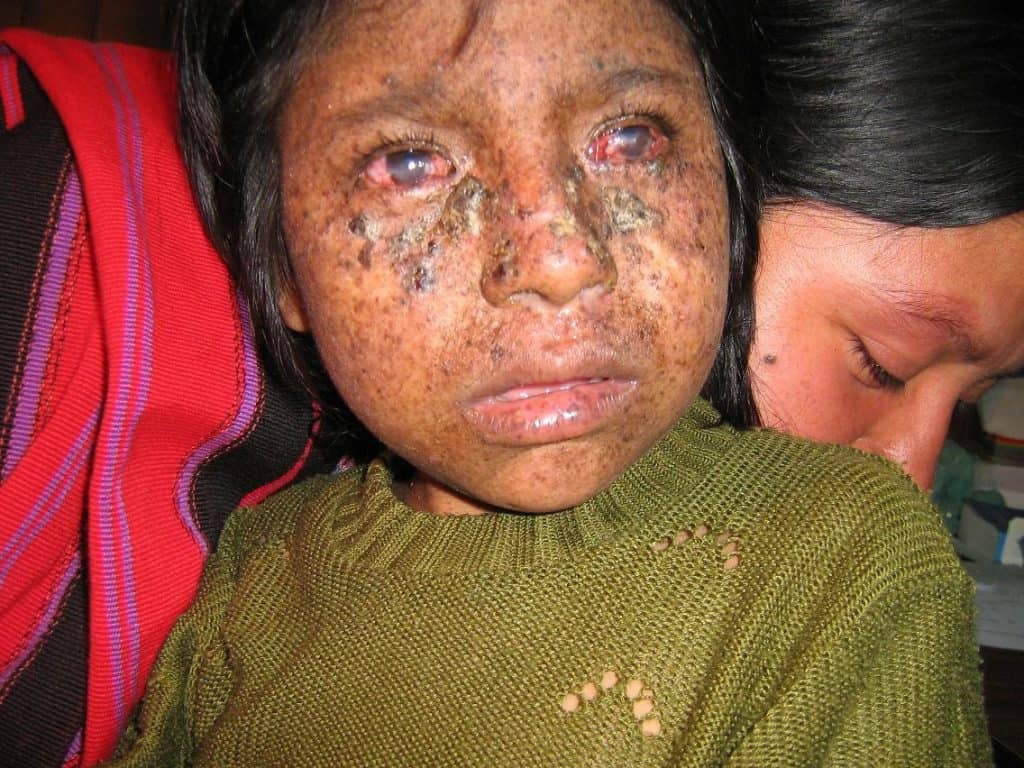 Xeroderma pigmentosum (XP) is a fairly rare skin disease that affects about 1 out of every 250,000 people worldwide. XP is rarer in the United States and Europe, affecting only 1 in every 1 million people. The skin disease, which causes extreme sensitivity to UV light (photosensitivity), is more common in Japan, North Africa, and the Middle East.

Xeroderma pigmentosum is usually diagnosed in infancy or early childhood and can even be detected before birth. In addition to making skin ultra sensitive to the sun, Xeroderma pigmentosum can cause neurological conditions like intellectual disabilities, developmental delays, or hearing loss. It is also common for people with XP to have eye problems.

Number of People Afflicted Yearly (or Ever): 1 in 500,000 people
Area of Body Affected: Entire body
Is it Treatable?: Yes

Number of People Afflicted Yearly (or Ever): 1 – 2 per 1 million people
Area of Body Affected: Skin and mucous membranes (mouth, lips, and eyes)
Is it Treatable?: Yes; those affected should also immediately stop taking the medication that caused it 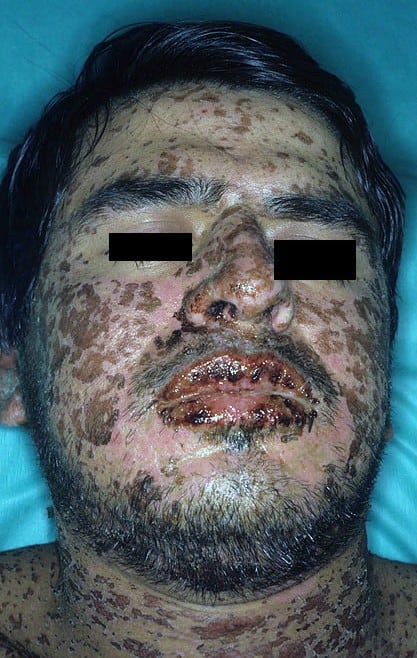 Stevens-Johnson syndrome (SJS) and toxic epidermal necrolysis (TEN) is a rare and severe skin reaction to certain medication. In the past Stevens-Johnson syndrome and toxic epidermal necrolysis were thought to be two separate conditions, but are now considered part of a spectrum. SJS is less severe and TEN may be life-threatening.

When Stevens-Johnson syndrome or toxic epidermal necrolysis occurs, blisters form on the skin and the mucous membranes of the mouth, lips, eyes, nose, and genitals. SJS and TEN rarely occurs with only about 1 to 2 per 1 million people affected in the West. Although SJS and TEN can be treated, the disease can also be fatal. About 10 percent of people with Stevens-Johnson syndrome die, while about 50 percent of patients with toxic epidermal necrolysis don’t survive. 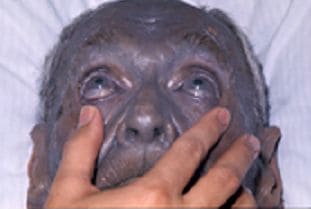 Argyria is a rare skin disease that is better known because its been covered in the news for causing people to turn a blue-gray color. The rare skin discoloration happens when a person is exposed to silver for a long period of time. People working in sliver mining, silver refining, jewelry making, silverware and metal alloy manufacturing, and photographic processing may be exposed to silver in their workplace.

Also, people taking dietary supplements containing colloidal silver can develop argyria. People believe that these silver dietary supplements can boost immune systems and treat cancer, HIV and AIDS, herpes, shingles, and eye problems. However there is no scientific research to support these claims. Once the skin turns blue-gray from argyria, the effects can’t be reversed.

Number of People Afflicted Yearly (or Ever): Fewer than 100 known cases
Area of Body Affected: General type affects whole body; Acral type affects the extremities (mostly hands and feet; sometimes arms and legs)
Is it Treatable?: No; petroleum jelly or other skin softening ointments (emollients) may be used to provide some relief 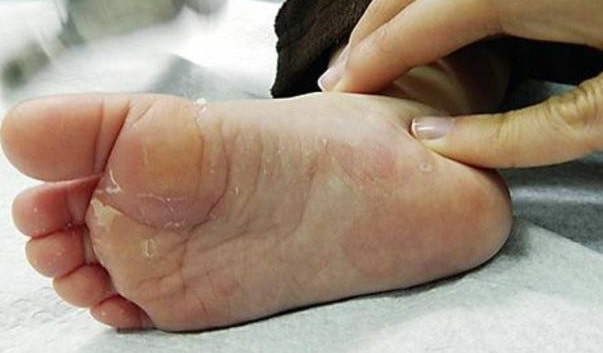 Peeling skin syndrome is the rarest skin disease in the world, with fewer than 100 known cases recorded in the medical literature. There are two main forms of peeling skin syndrome: the generalized form can affect any part of the skin and the acral type only affects the extremities (mostly the hands and feet).