10 Most Expensive Engagement Rings Ever

According to numerous reports, expensive gemstones have fallen out of favor with millennials and younger generations because they are not affordable for anyone except the ultra wealthy. The pinnacle of luxurious jewelry is engagement rings and the most expensive ones ever all belong to celebrities. Each of the engagement rings on this list costs millions of dollars, but almost all of these engagements did not end in wedded bliss. 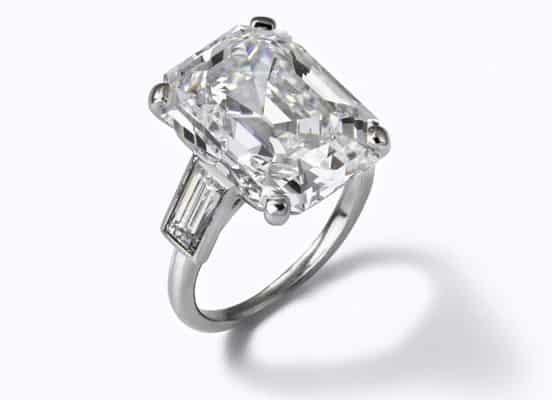 American actress Grace Kelly, famous for her marriage to Prince Rainier III, Prince of Monaco, was engaged to the Prince in 1956, after a year of courtship. Prince Rainier initially proposed with a ring that was fashioned from two family heirlooms, forming intertwining diamond and ruby circlets. Because this ring was part of Monaco’s crown jewels, Prince Rainier also gave Kelly a second engagement ring, one she could wear out. The engagement ring was designed by Cartier and featured a 10.47-carat emerald cut flawless diamond. At the time, this ring reportedly cost over $4 million.

Kelly was a lifelong fan of Cartier jewelry and was first introduced to the design house by director Alfred Hitchcock.

Adjusted for inflation, Grace Kelly’s Cartier Engagement ring is now worth over $38 million! 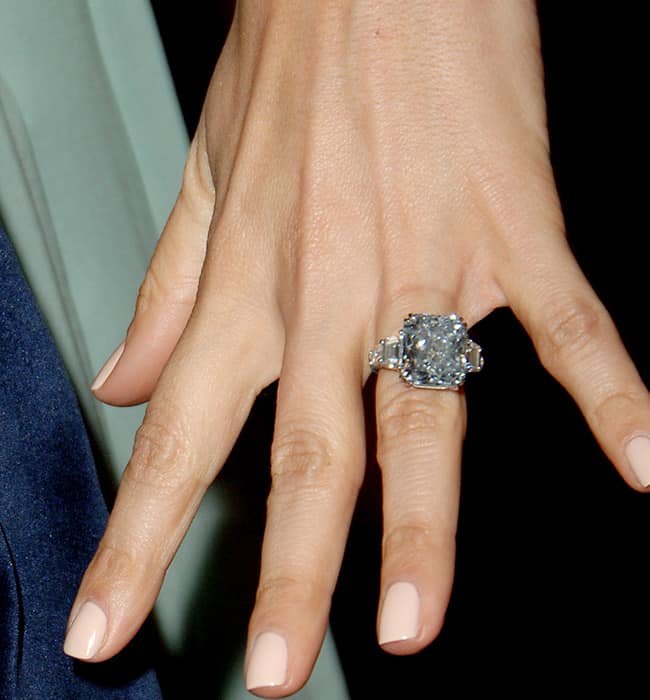 This is Jennifer Lopez’s second appearance on this list, which isn’t that surprising since she reportedly has expensive tastes. Just a few months after breaking up with Ben Affleck, for the first time, in 2004, Lopez and singer Marc Anthony were hitched in secret. Anthony gave Lopez an 8.5-carat blue diamond engagement ring. The estimated cost of the ring was between $4 – $4.5 million. Lopez and Anthony were married for seven years and had twins, Max and Emme. 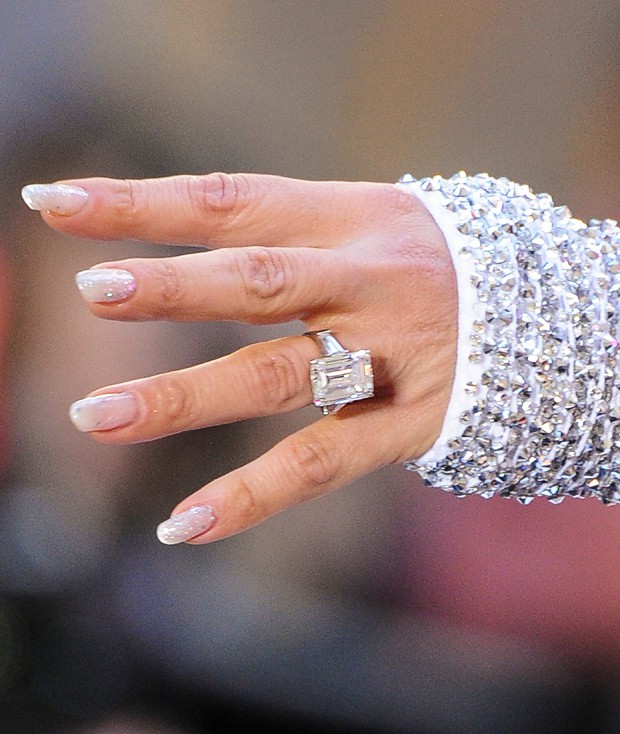 Jennifer Lopez is another lady on this list who has been married and proposed to quite a few times. Although they did not end up tying the knot, one of Lopez’s most recent engagement rings was from Alex Rodriguez. While the details of the ring were never made public, experts estimate that the engagement ring was about 15 – 20 carats and cost at least $1 million and as much as $5 million. It was an emerald-cut diamond set on a platinum band. Lopez and Rodriguez split in early 2021 and she is back with her ex-flame Ben Affleck.

Despite the breakup, Jennifer Lopez and Alex Rodriguez are reportedly still friends and she still has ownership of the engagement ring. 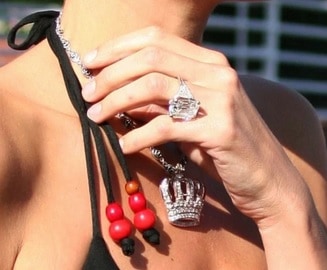 Although she has been engaged four times, Paris Hilton has not yet said “I do.” Of all of Hilton’s engagement rings, the most impressive was the one from Greek shipping heir Paris Latsis – yes, the media absolutely went crazy over Paris x Paris. The engagement ring was a whopping 24-carats and reportedly cost around $5 million. Unfortunately, the Paris x Paris engagement was short-lived and the couple split six months after their engagement.

According to several reports, Paris Latsis initially proposed with a canary diamond engagement ring, but Paris Hilton did not like it. Latsis then presented Hilton with 15 rings and she ended up choosing the 24-carat diamond ring, that reportedly was too heavy. 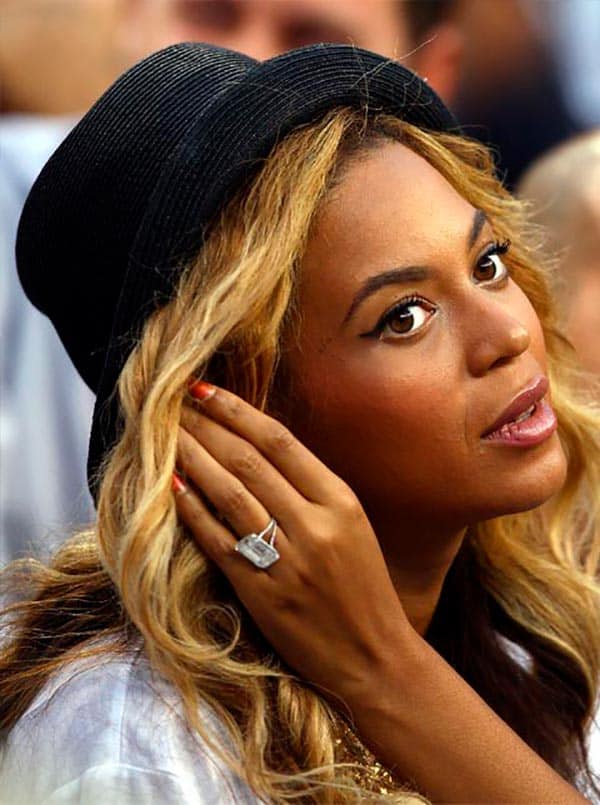 Beyoncé and Jay-Z were secretly married in 2008, after dating since 2001. The 18-carat engagement ring that Jay-Z gave to Beyoncé made its first appearance on the red carpet for Fashion Rocks at Radio City Music Hall in NYC in September 2008. Reportedly, Beyoncé’s engagement ring cost $5 million. The 18-carat diamond is an emerald cut with a solitaire setting. Like a few of the other celebrity engagement rings on this list, Beyoncé’s ring was designed by Lorraine Schwartz.

Instead of getting matching wedding bands, Beyoncé and Jay-Z got matching IV tattoos on their ring fingers, because they were married on 4/4, and both Beyoncé and Jay Z were born on the fourth day of their respective birth months. 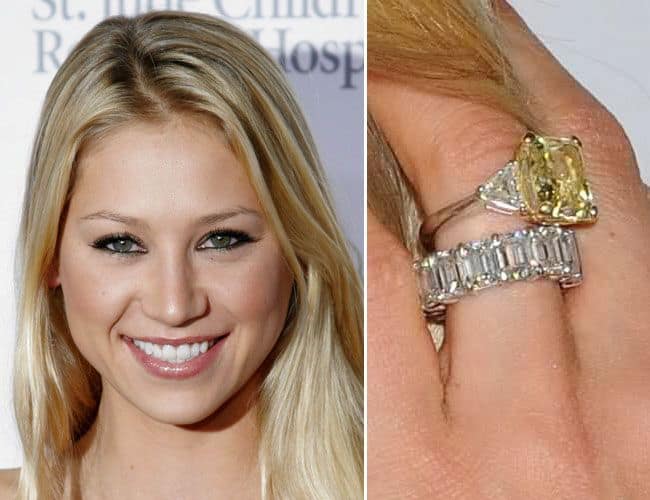 Details about Anna Kournikova’s canary yellow diamond engagement ring from Engrique Iglesias remain a mystery. No one knows for sure when Iglesias gave the ring to Kournikova, but she was first spotted wearing it around 2009 along with what many speculated was an eternal wedding band. Experts estimate that Kournikova’s canary yellow diamond ring cost about $5.4 million. Iglesias and Kournikova never confirmed when they got married, but it reportedly was sometime in 2007.

Reportedly, Anna Kournikova received another engagement ring from Enrique Iglesias. It was a champagne and cognac 11-carat, pear-shaped diamond ring with an estimated value of between $2.5 million and $6 million. 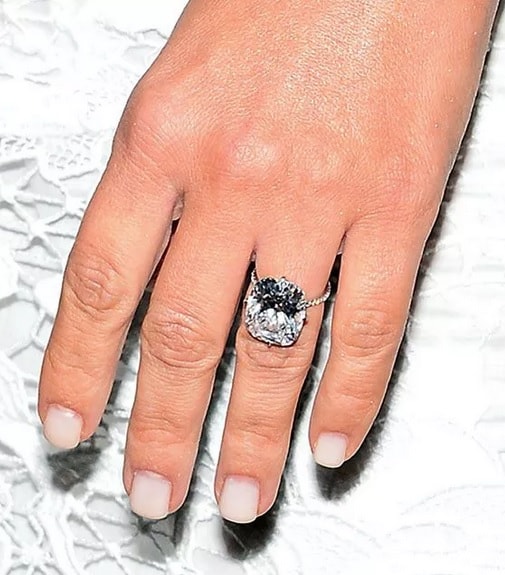 No one knows for sure just how much Kanye West shelled out for Kim Kardashian’s engagement ring, but sources estimate it was between $4 – $8 million. The ring featured a cushion-cut 15-carat diamond and was designed by Lorraine Schwartz.

Although Kim Kardashian’s second engagement ring featured a larger diamond, the originally diamond ring is worth much more because it Type IIa white diamond. 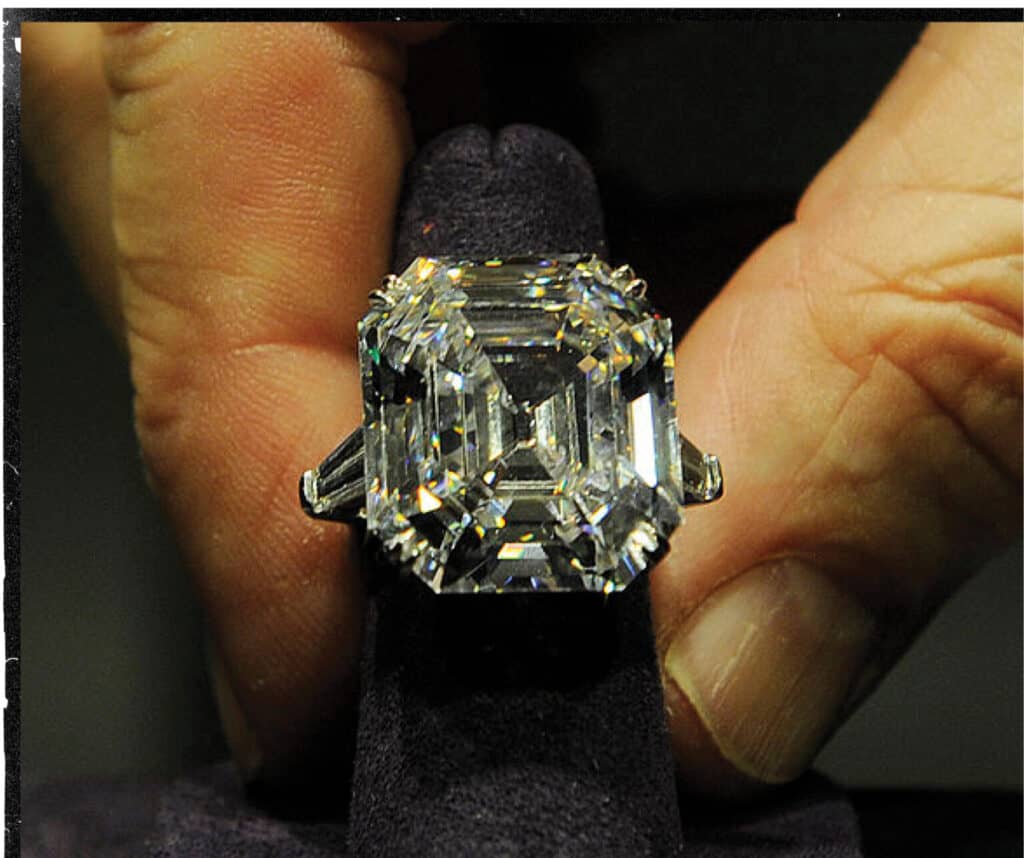 Elizabeth Taylor, who rose to prominence as an actress, is probably better known for her off-screen life and her seven marriages. Throughout her lifetime, Taylor amassed an impressive jewelry collection, which of course, included engagement rings. Of all her engagement rings, Taylor’s most spectacular (and the most valuable) was The Elizabeth Taylor Diamond Ring, formerly known as The Krupp Diamond. The 33.19-carat diamond was given to Taylor by Richard Burton, which she wore as a ring.

The Elizabeth Taylor Diamond has been determined to be a Type IIa diamond, the most chemically pure diamonds in the world. 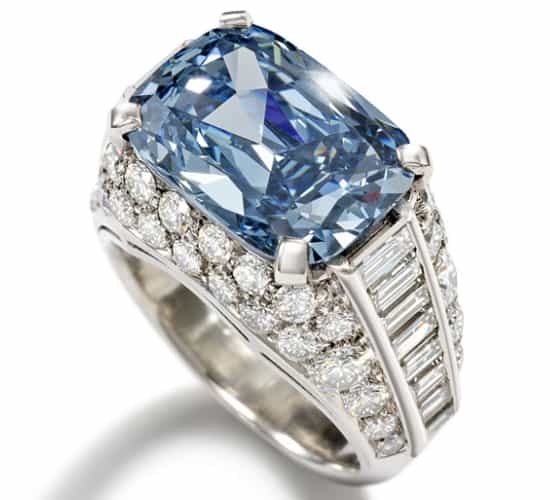 Coming in at a close second on this list is the Bvlgari Blue Diamond Engagement Ring that was sold at auction in 2014 for $9.49 million. The stunning ring features a cushion-shaped fancy deep-blue center diamond that weighs 5.30 carats. The ring’s band is decorated with pave-set round brilliant and baguette cut white diamonds. The high price tag on the Bvlgari Blue Diamond Engagement Ring is due to the large blue diamond, which is one of the rarest types of diamonds in the world.

The Bvlgari Blue Diamond Engagement Ring was made in 1965 and was set in the jeweler’s signature Trombino style.

The Bvlgari Blue Diamond Engagement Ring was purchased by Graff Diamonds, one of the world’s best known collector houses of precious gems. 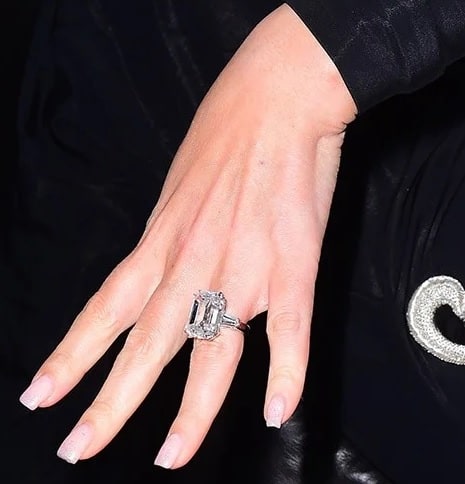 Worth an estimated $10 million in 2016, Mariah Carey’s engagement ring from billionaire James Packer is the most expensive engagement ring ever. Carey and Packer had a whirlwind romance that began in 2015 and by January of the following year, the couple were engaged. Packer proposed with a one-of-a-kind 35-carat, emerald-cut platinum diamond with two elegant, and tapered baguette diamonds, ring.

However, Carey and Packer called it quits in October 2016, but as part of their settlement, Carey was allowed to keep the $10 million engagement ring. Carey sold the ring for a rumored $2.1 million in 2018, which is a bargain compared to the ring’s original price tag.

10 Most Expensive Items Currently on Amazon