Over the past few years, college attendance, particularly in the United States has been declining. This is because college is becoming prohibitively expensive in this country and more and more students can no longer afford to go to college, even with financial aid. As most colleges in the rest of the world are affordable, all of the most expensive colleges in the world are located in the U.S. Every single one of the schools on this list currently cost more than $80,000! Of course, these schools justify the high prices with the fact that they are all some of the most prestigious universities in the world. Additionally, most of these schools provide a generous amount of financial aid to students whose families make less than six figures a year. 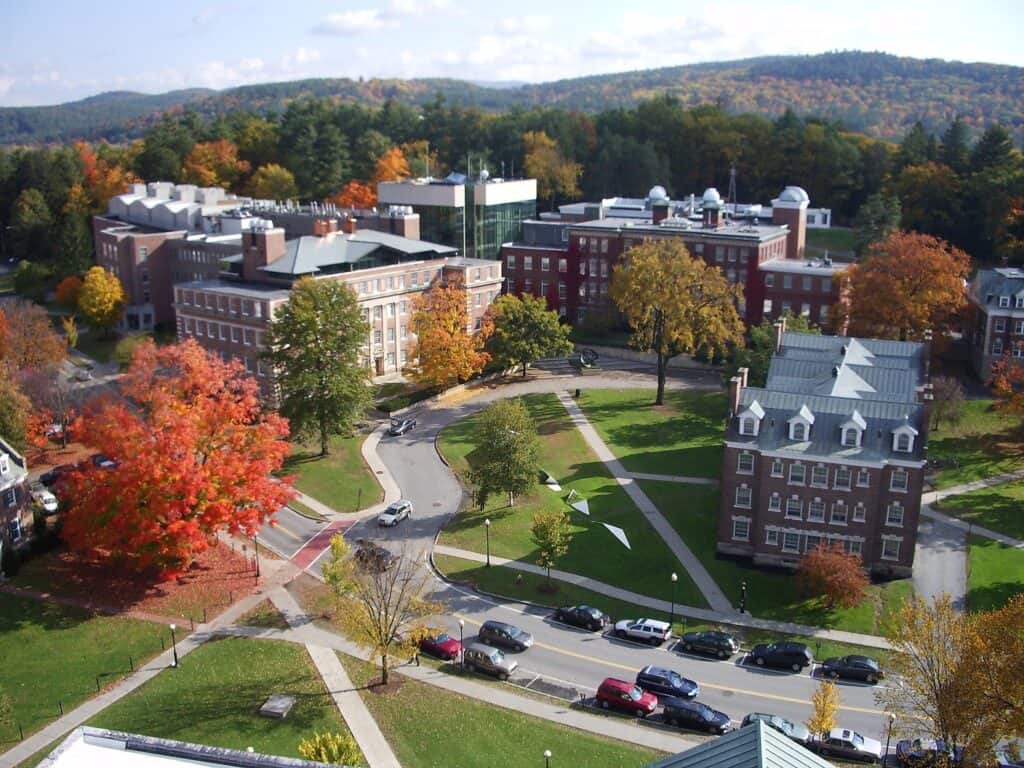 
The total cost of attendance at Dartmouth College for the 2021-2022 school year is $81,501. Direct costs include tuition & fees, housing, and food. Indirect expenses include books and personal expenses. All students must purchase the Group Health Insurance Plan unless they can certify to Health Services that they are covered by a comparable medical plan. The cost of Darthmouth’s health insurance is $4,163. Additionally, all entering students must have a computer meeting Darthmouth’s requirements. While students can bring their own suitable computer, Darthmouth has a basic computer package that costs $1,700.

Surprisingly, Dartmouth is only one of four Ivy League schools on this list. Dartmouth College is one of the oldest colleges in the U.S.

Dartmouth College was founded to educate young Native Americans in Christian theology and liberal arts. However, Dartmouth became a secular school around the turn of the 20th century and is one of the most prestigious universities in the U.S. 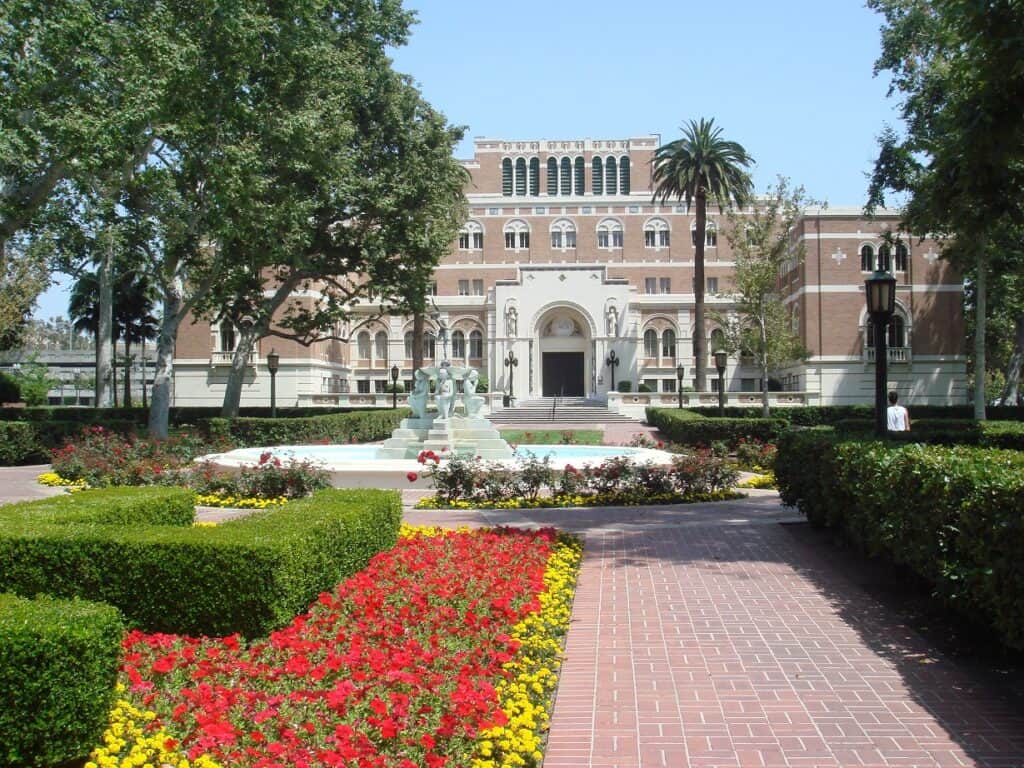 University of Southern California, known as USC, is the second most expensive college in that state, after Harvey Mudd College. Total cost of attendance for 2021-2022 is $81,659. These fees include tuition & fees, housing, dining, books & supplies, transportation, and personal & miscellaneous expenses. There is also an additional $450 fee for new students for their first semester. Students who have parents or relatives that work at USC receive a significant discount on room and dining expenses. Their estimated total cost of attendance for this year is $72,263.

USC is the oldest private research university in California and was founded in 1880. The college  is ranked among the top universities in the United States and admission to its programs is highly selective.

The University of Southern California is the birthplace of the Domain Name System, the naming system used for the internet’s websites. 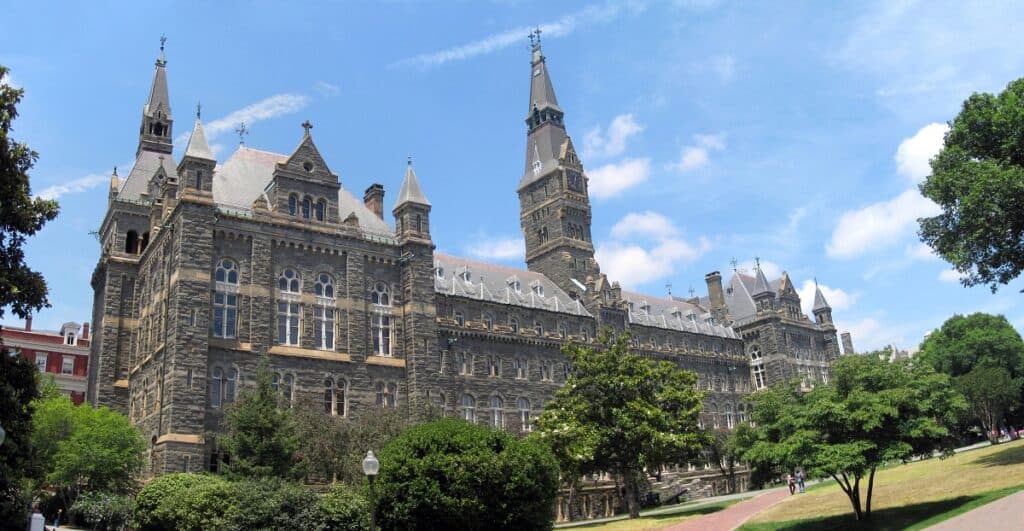 Georgetown is a private Jesuit research university and is ranked among the top universities in the United States. It is also the oldest Catholic institution of higher learning in the U.S. 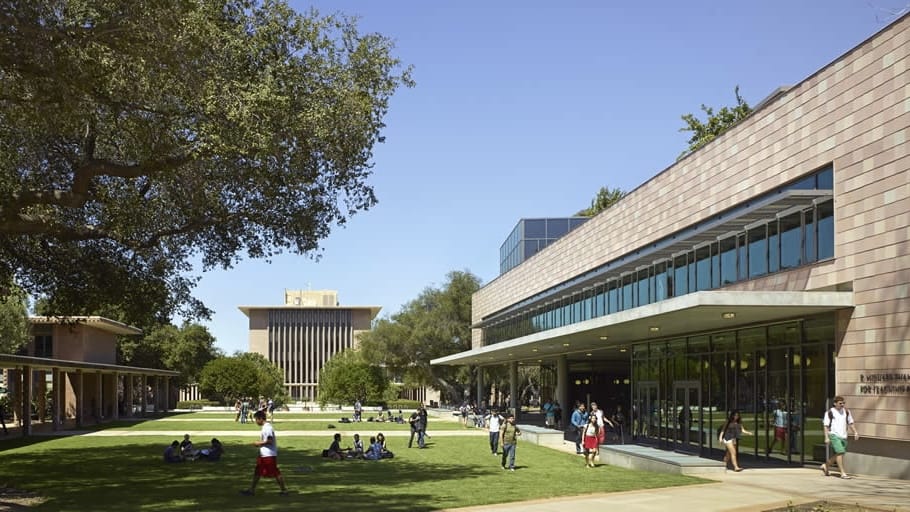 Harvey Mudd College typically appears at the top of any list of the most expensive colleges. However, for the 2021-2022 school years, Harvey Mudd is in the bottom half of the Top 10 most expensive colleges. But, average cost of attendance at Harvey Mudd is still very high, coming in at $82,236. This estimate includes tuition, room and board, student body fee, personal expenses, and books & supplies. First year students and new transfer students are also charged an additional $250 orientation fee.

Founded in 1955, Harvey Mudd College was funded by the friends and family of Harvey Seeley Mudd, one of the initial investors in the Cyprus Mines Corporation, and named in his honor. Mudd was involved with planning the school, but died before it opened. Harvey Mudd is known for its highly competitive and intense academic culture.

Harvey Mudd College graduates earn the highest mid-career salaries of any college or university in the United States, according to data from payscale.com. 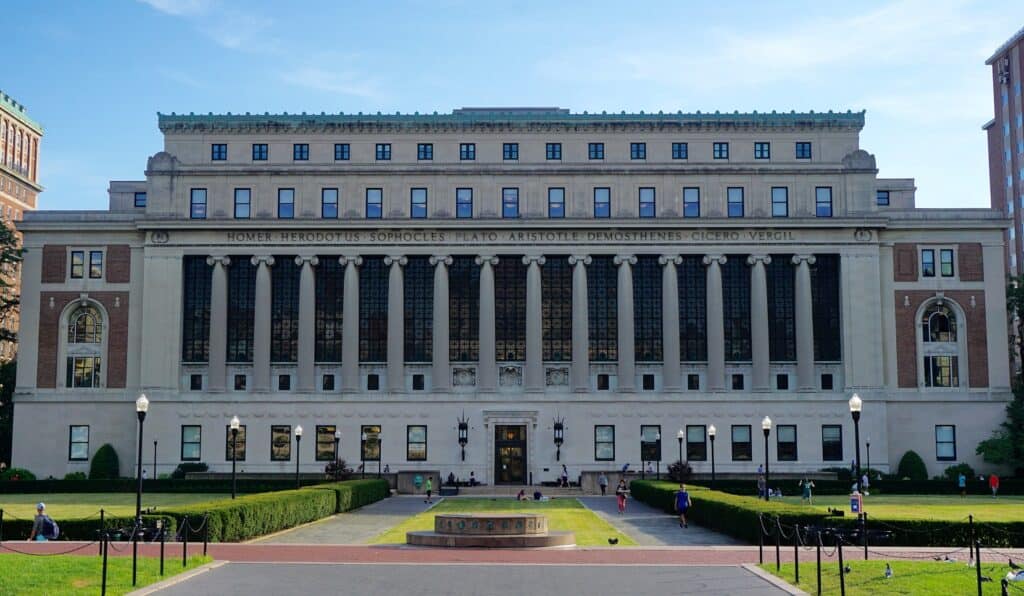 Columbia University is another Ivy League college that has a cost of attendance of more than $80,000. For the 2021-2022 school year, the total cost of attendance at Columbia is $82,590. These fees include a year of tuition, room and board, and personal expenses. First year and incoming transfer/combined plan students are also charged one-time transcript and orientation fees totaling $590. While Columbia’s cost of attendance is very high, the school says that it awards more than $150 million annually in scholarships and grants from all sources. About 50% of Columbia students receive grants from Columbia and the average amount awarded is $52,073. Additionally, according to Columbia, the school provides enough financial aid that students are expected to have no student loans.

Since 1776, Columbia has been a private research university. However, the school was founded in 1754 by royal charter under George II of Great Britain. It was original called King’s College because of this.

With over 14.5 million volumes, Columbia University Library is the third-largest private research library in the United States. 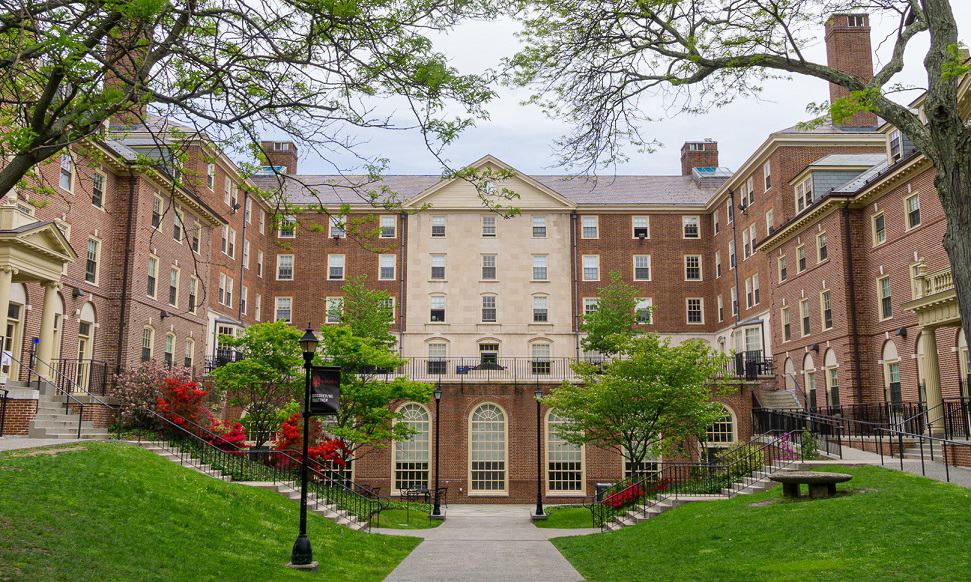 For the 2021-2022 school year, Brown University estimates that students will pay about $82,670 in direct and indirect charges. Direct expenses include tuition, fees, room, and meals; indirect expense estimates include books and personal expenses. According to Brown, personal expenses are based on estimated costs incurred for personal expenses during the academic year including clothing, laundry, toiletries, cell phone expenses, entertainment, local transportation and other incidentals. Brown’s health insurance plan costs an additional $4,204 for the school year.

Brown University is another Ivy League school on this list and it is also one of the first colleges established in the U.S. The university’s medical program is the third-oldest in New England, while its engineering program is the oldest in the Ivy League.

Brown University was the first  college in North America to accept students regardless of their religious affiliation. 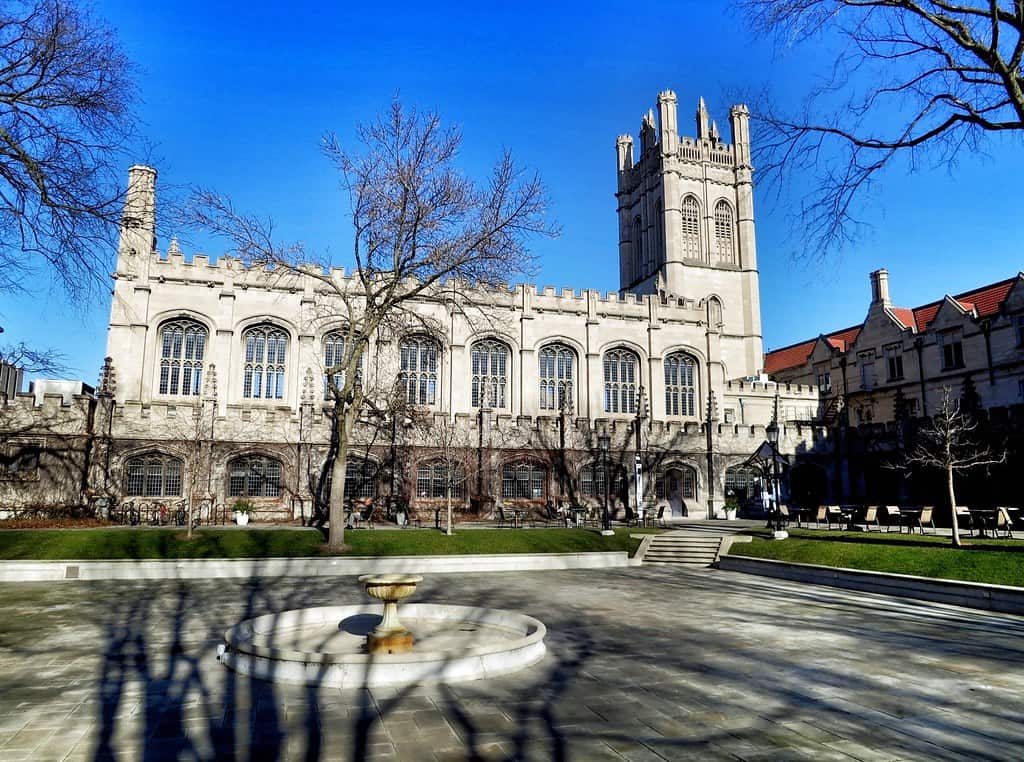 In 2020, the University of Chicago made history when it became the first college in the world when tuition and fees cost more than $80,000 for the 2020-2021 school year. This school year, every single college on this list followed suit and cost of attendance is well beyond $80,000 and are inching closer to $90K. University of Chicago’s costs also climbed higher for the current school year, with an $82,848 price tag. This estimate includes tuition, student life fee, rooms & meals, books, and personal expenses. On top of all that, first year students have one-time class fee estimated at $1,278. Those without other health insurance will be enrolled in the University of Chicago’s health insurance program for an additional fee of $4,566.

The University of Chicago is ranked among the universities in the world and is one of the most selective in the U.S.

As of 2020, the University of Chicago’s students, faculty, and staff have included 100 Nobel laureates, giving it the fourth-most affiliated Nobel laureates of any university in the world. 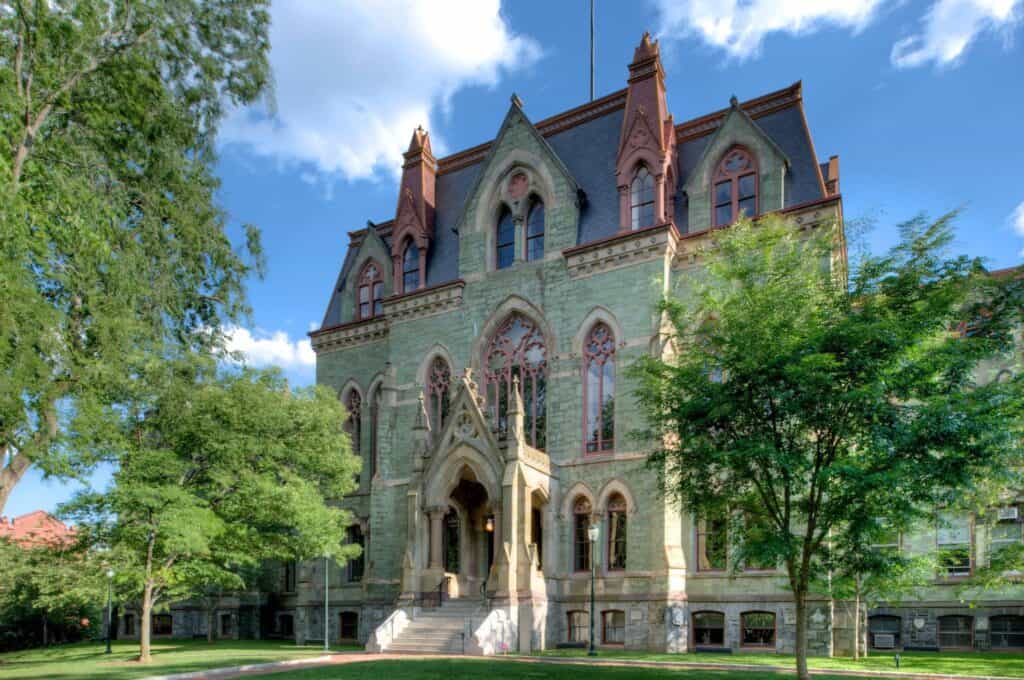 The current cost of attendance for the University of Pennsylvania, aka Penn or UPenn, is about $83,298. This estimate includes a year’s tuition, fees, housing, dining, books and supplies, transportation, and personal expenses. For students who permanently reside in the U.S., Penn also adds a separate travel allowance to account for two round-trips home. The price is based on the region the student calls home: Eastern/Central: $535 (Excluding NJ, NY, MD, PA, DE, CT); Mountain/Pacific: $665; and Alaska/Hawaii: $665. Also, any students who don’t have health insurance are automatically enrolled in the Penn Student Insurance Plan, which costs an additional $3,874 for the current school year.

The University of Pennsylvania is an Ivy League school and one of the finest institutions of higher learning in the world. The founder of Penn was Benjamin Franklin, and the school is home to many historic firsts, including establishing the first collegiate business school, Wharton School in 1881.

The University of Pennsylvania was founded in 1740 and is one of the nine colonial colleges, which are the oldest colleges in the U.S. 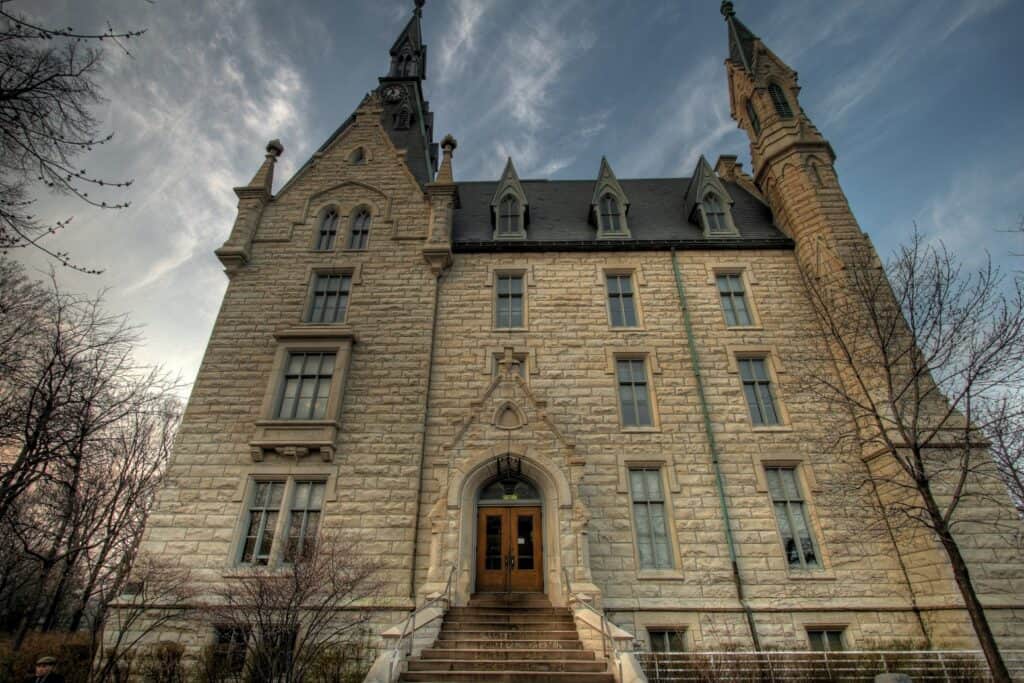 Northwestern University joined the $80K+ cost of attendance club for the 2021-2022 school year when it released its student budgets for this year. Currently, first year students attending Northwestern University are shelling out about $83,838 for full-time tuition, fees, on-campus housing/meals, books & supplies, personal expenses, and transportation. Additionally, any students who need to use Northwestern’s health insurance plan will need to add another $4,170 for the school year.

Despite the high price tag, many students apply to Northwestern because it is one of the most prestigious academic institutions in the world. Northwestern has produced numerous heads of state, 22 Nobel Prize laureates, 42 Pulitzer Prize winners, 17 Rhodes Scholars, 84 members of the American Academy of Arts and Sciences, and 18 Olympic medalists.

Northwestern University has an endowment of $14 billion, one of the largest university endowments in the world, as well as an annual budget of $2 billion. 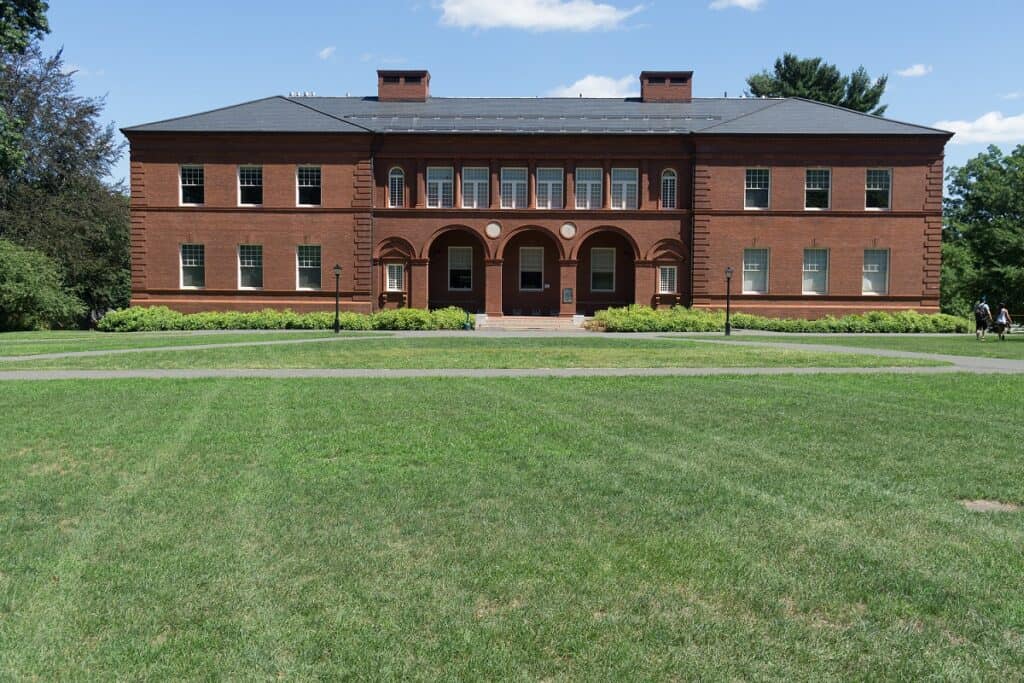 As of the 2021-2022 school year, Amherst College is the most expensive college in the world with an estimated yearly cost of attendance $82,856 – $85,296. The price for just tuition, room and board is about $76,800. The other expenses included in Amherst’s estimate include: health insurance, tuition insurance, books and supplies, personal expenses, travel/transportation, and other student fees (such as student activities, campus center programs, and residential governance).

Amherst College is one of the top private liberal arts schools in the U.S. The college offers 38 major programs, and students do not have study a core curriculum or fulfill any distribution requirements. Many notable alumni have graduated from Amherst, including 30th President of the United States Calvin Coolidge, Pulitzer Prize-winning poet James Merrill, and Academy-Award nominated director David O. Russell.

According to Amherst College, the annual cost of educating a student at Amherst is approximately $109,000, but money from the school’s annual endowment as well as gifts and grants go toward covering as much of these costs as possible.

10 Most Expensive Engagement Rings Ever