Sea glasses are fascinating. They come in all shapes, sizes, and colors. These frosted glasses are true works of art created by nature. Sea glasses are also called ocean glass, mermaid tears, or trash glass. Sea glasses are perhaps the finest examples of how the trashes can become beautiful over time.

Sea glasses are basically shards of broken glasses thrown into the ocean. They get turned, tumbled, and polished by the constant motion of waves and currents. The sand, salt, and other chemicals present in the water body also affect the surface of the glass.

Technically, sea glasses can be found on all the beaches located anywhere in the world. However, the beaches of southern Spain, Italy, Hawaii, Mexico, Puerto Rico, Scotland, England, and the northeast US are more famous for rare and beautiful sea glasses.

The color is the primary marker that determines the rarity of sea glass. While green, brown, and white are some of the most available colors of sea glasses commonly found around the world, some other colors are exceedingly rare.

Here we list the 8 rarest sea glass colors that are not available in abundance. 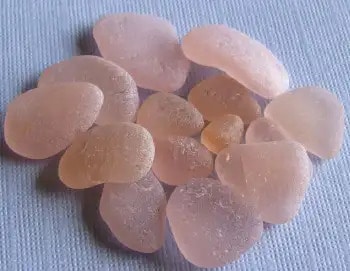 Pink sea glasses are fairly rare. Although it is referred to as pink glass, the actual color of this sea glass is peach or soft pastel pink with a hint of yellow.

The most likely origin of pink sea glass is Depression glass tableware.

They were made from 1929 to 1940, around the time of the Great Depression in the US and Canada. Plates, flower vases, and several other artifacts were made with this glass. Those pieces are now considered collectible, and people pay hundreds of dollars to get hold of them.

However, during the time of their production, these depression glass pieces were cheap and mass-produced.

Depression glass tableware was sold in five-and-dime stores or given out for free with different household goods.

Most of the pink sea glasses that we see today are not genuine pink glasses. They are sun-colored pink derived from clear transparent glass. When the selenium (used as a decolorant) present in these glasses comes in contact with the UV rays, it turns pale pink. 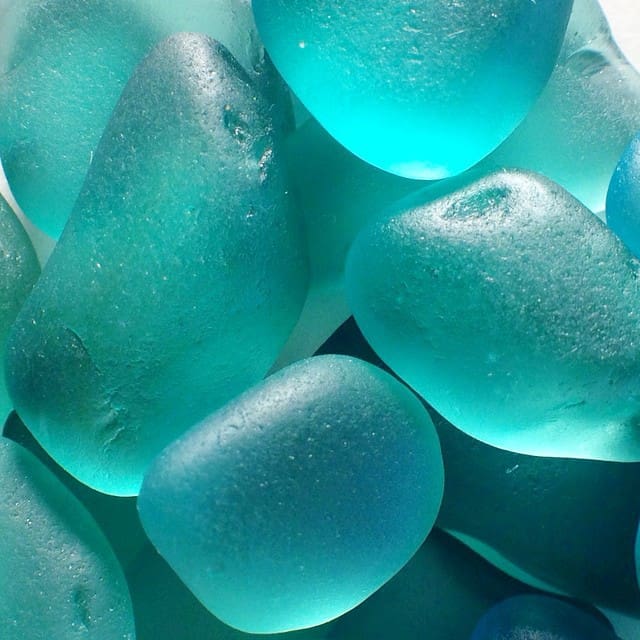 Teal is another rare color for sea glasses. This color looks gorgeous and thus has a high demand, especially in the jewelry market. This color is rare simply because of a lack of sources.

Teal is an unusual color for glasses and is not used very commonly. The teal sea glasses are made of glass bottles and jars of mineral water, wine, seltzer, and ink. Most of these bottles are from the period 1870 to 1910.

Besides, teal sea glass can also be formed from the insulators used on the electric poles during the early 20th century. These teal glasses are really old and extremely difficult to find.

People sometimes confuse aqua-colored sea glasses with teal. However, teal is much darker and more intense than aqua.

Teal sea glass is considered very rare in almost all countries. However, teal sea glass is more readily available in Peru. It is because teal-tinted glasses were more commonplace in this country. 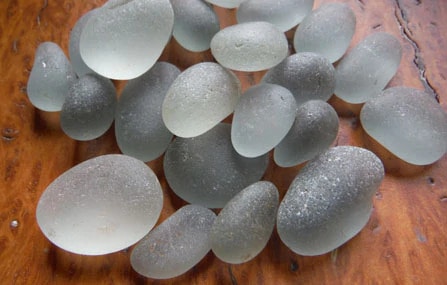 Unlike pink sea glass, gray colored sea glass can have multiple sources. The most common origin of gray sea glass is cut crystal tableware, abundantly used till the mid-1900s.

This glass had lead oxide that was added to it to enhance the sparkle. Sometimes the manufacturers also used manganese in the glass. When exposed to the ultraviolet ray, these metal particles turn the color of the glass to gray.

Another source of gray sea glass can be intentionally made gray glass. Iron oxide or selenium were used to make gray-colored glassware. They were mostly produced around the 1920s and 1930s. However, the gray color glass itself was very rare.

Gray sea glass can also be derived from tinted automobile windows or old television sets. However, it is much less likely for a discarded TV or car to be thrown into the ocean.

Depending on its source and the surrounding climate, gray sea glasses can be of different shades. The darker grays are most expensive than the pale ones.

Sea glass takes around 30 to 40 years to acquire the desired texture and shape. Some sea glasses found along the coasts can be as old as 200 years.

Rarity: Very rare
Most common source: Beer and liquor bottles from the eighteenth and nineteenth century
Frequency: 1 in 5,000 pieces (Approx.) 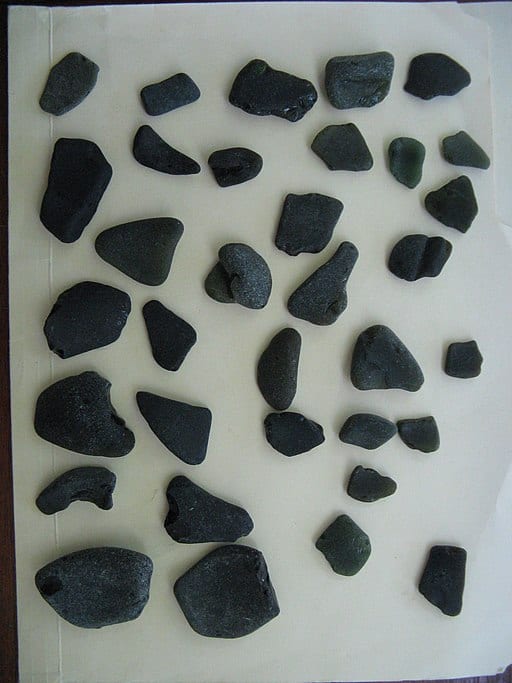 Black sea glasses are not truly black. They are very old, and thick sea glasses are derived from dark green or brown glasses. Because of its thickness, light cannot pass through it, and that makes it appear black. You can see the hue of the original glass by holding it against the light.

Until about 1870, many beer bottles and other liquor bottles were made with very dark-colored glasses. In the US, iron slag was used in these glass bottles. Most black sea glasses are made of these old liquor bottles.

Sea glasses become thicker and stronger with time. Black sea glasses are so thick that they may appear to be a black rock. 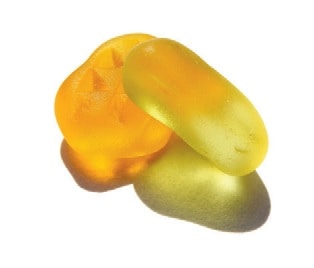 The most common source of sea glass is discarded bottles. As the yellow color glass was never popular for bottles and jars, finding yellow sea glass is exceedingly rare. A small number of yellow-colored glasses were used in art glass, stained glass, and fine tableware- the items that people do not generally throw away.

Most yellow sea glasses have their origin in Vaseline glass. It is a specific type of uranium glass that has a distinctive yellowish color. The glass looks like petroleum jelly, hence the name. The other shades of yellow glass contained sulfur mixed with calcium, potassium, or iron oxide.

Although often used interchangeably, sea glass and beach glass are not the same. Beach glasses are formed in fresh water and are usually less frosted. 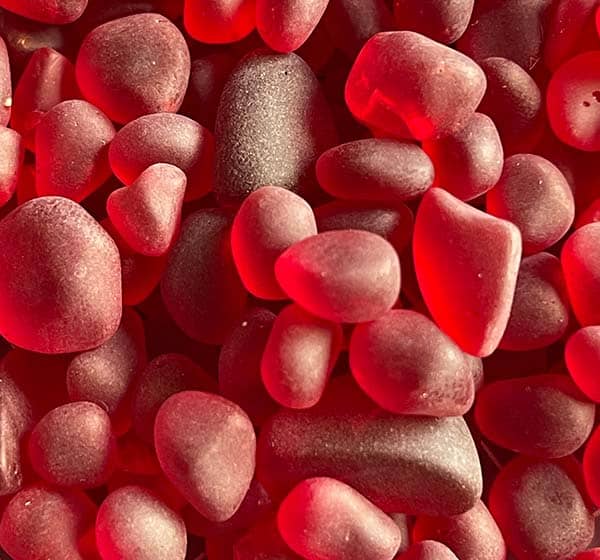 Red is one of the most coveted sea glass colors. It is mainly because of their unmatched beauty and rarity.
Usually, manufacturers use gold to bring the vivid red hue to the glasses. Thus, red glasses are very expensive as well as rare. Red glass is used in luxury dinnerware and pricey artifacts.

During the 1950s, Anchor Hocking Glass Company in the US found a new way to bring a red hue to the glass. Instead of gold, they used copper. It significantly reduced the production cost of red glass, and the glass began to be used more abundantly. The company named the product Royal Ruby.

Long Island, California, used to have many red sea glasses. Later it was known that this place had a brewery called Red Bottle Beer. Most of the red sea glasses were found near the place where this beer was bottled. 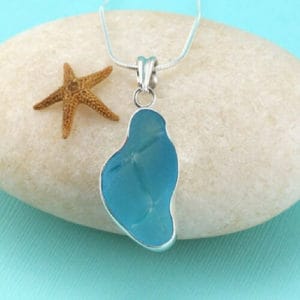 Turquoise is the second most rare color for sea glasses. They are rarer than red sea glasses and rarest among all blue sea glasses. An untrained eye can easily confuse them with other varieties of blue sea glasses. However, finding a perfect turquoise sea glass with a starling blue hue is a dream of any beachcomber.

The color of these glasses is more vivid than aqua sea glasses. They have an electric shade that glows on the beach. A tiny amount of copper is mixed with cobalt glass to achieve the perfect color.

During the late 1800s- early 1900s, glass manufacturers experimented with various colors. However, they found it extremely difficult to create turquoise-colored glass with a perfect hue. Thus, it was only used in pricey decorative items.

Turquoise sea glasses are mostly found on tropical beaches in the Caribbean. The Caribbeans used to make their windowpanes with turquoise glass to filter out the sunlight. Thus, this bright-colored glass was somewhat common in this region. 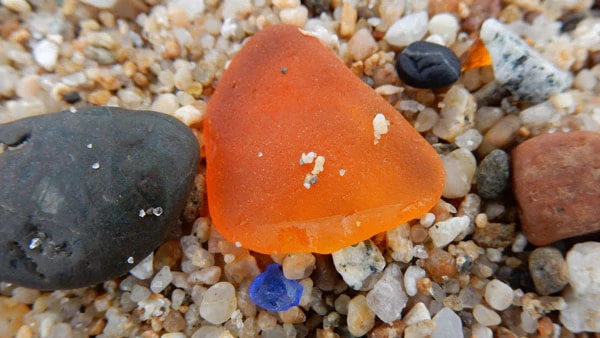 Orange is the rarest sea glass color. Orange glasses were never used for making mass-produced bottles. A Virginia-based company called the New Martinsville Glass Company introduced a type of orange glass named Persimmon in 1964. During the following decades, they made art glass, vases, and many other décor items with this glass.

Persimmon glass is one of the major sources of today’s orange sea glasses. Another type of orange glass called Amberina became popular during the 1930s. Some orange sea glasses may also have their origin in the décor items made with Amberina.

All types of sea glasses are becoming rarer due to the unavailability of glass bottles and jars. Today, most containers are made with plastic or similar material. Besides, during the last few decades, awareness about recycling has increased among the general population. As a result, glass bottles are not thrown into the oceans as frequently as they used to be.

8 Most Expensive Restaurants in Washington DC