For thousands of years, mushrooms have been known for their medicinal properties. The Greek physician Hippocrates even wrote about them as early as 400 BC. Japan was enjoying them by 600 CE. Even Aristotle enjoyed a truffle or two in his time. Some believe that mushrooms as spiritual and medicinal items may date back as far as 10,000 BC!

It took America a long, long time to start enjoying them, however, with the first mention being in a cookbook in 1824. Their allure has led to the modern age where a yearly crop of nearly a billion pounds of mushrooms, worth over a billion dollars, is grown and eaten. This includes anything from the simplest, cheapest button mushrooms to the most expensive truffles.

In this list, we break down the 8 most expensive mushrooms you can buy. 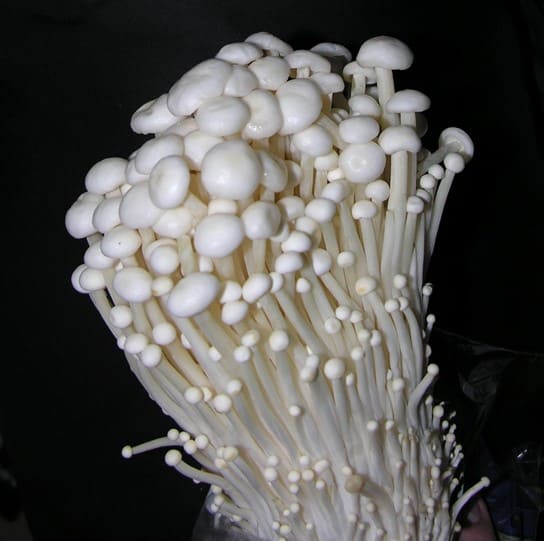 Enoki mushrooms do not seem outrageously expensive at $1.19 per ounce, but their tiny shape and mild flavor mean you need quite a few of them to make a difference in a dish. Ideally, you would stir-fry them long enough to be aromatic but still with a little bite.

Enoki mushrooms are popular in Asian cooking such as stir-fries and soups, imparting delicious umami flavor to any dish. Some sites list them as costing over $100 per pound. However, they can be commonly bought at most grocery stores and on sites like Amazon and Instacart for much less.

Enoki mushrooms are also called “velvet shank,” a less dainty name for sure. They can be harvested in the autumn and winter months, September through March, on the stumps of trees that flourish in East Asia such as Mulberry, Ash, Hackberry, and Persimmon trees. 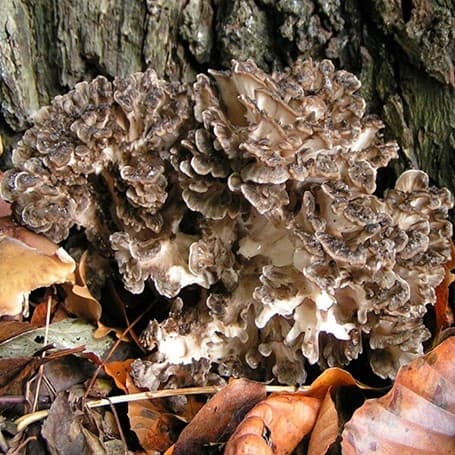 Maitake mushrooms are well-known for their medicinal benefits as home remedies for the symptoms of diabetes and hypertension. Their iconic feathery appearance, which fans out in layers of brown and white frills beneath their favorite trees, is also a common sight in restaurants. Maitake mushrooms are fantastic on pizza, salad, or deep-fried like meat and eaten on their own.

They are commonly harvested in the United States in regions such as Oregon and cost around $1.25 per ounce.

The appearance of maitakes, mottled and thin like feathers, has given them the nickname, “hen of the woods.” 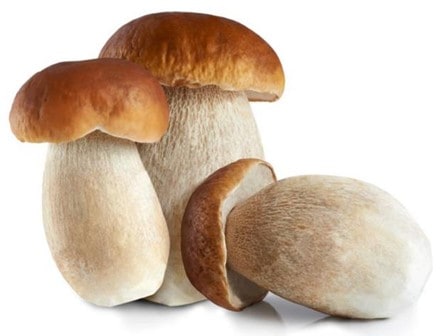 Porcini mushrooms have adorable brown hats that make them look almost alive – in Disney’s Fantasia, they would be dancing on their squishy stems in a forest glen. Porcinis grow in a summer form from May to July, favoring deciduous trees like sweet chestnut and oak to lay down their fungus bodies in the shade. The autumn varieties favor spruce and pine trees and can be harvested later in the year.

Porcini mushrooms can cost $3.60 per ounce fresh and should be used as soon after harvest as possible. They are a favorite of Italian chefs for their meaty, earthy flavor. They’re perfect for pasta dishes, sauces, and risotto.

You should never cut porcini mushrooms from their growing place. Instead, gingerly turn the tuber over in the earth until it’s loose enough to pluck. More aggressive harvesting risks breaking the mushrooms apart. 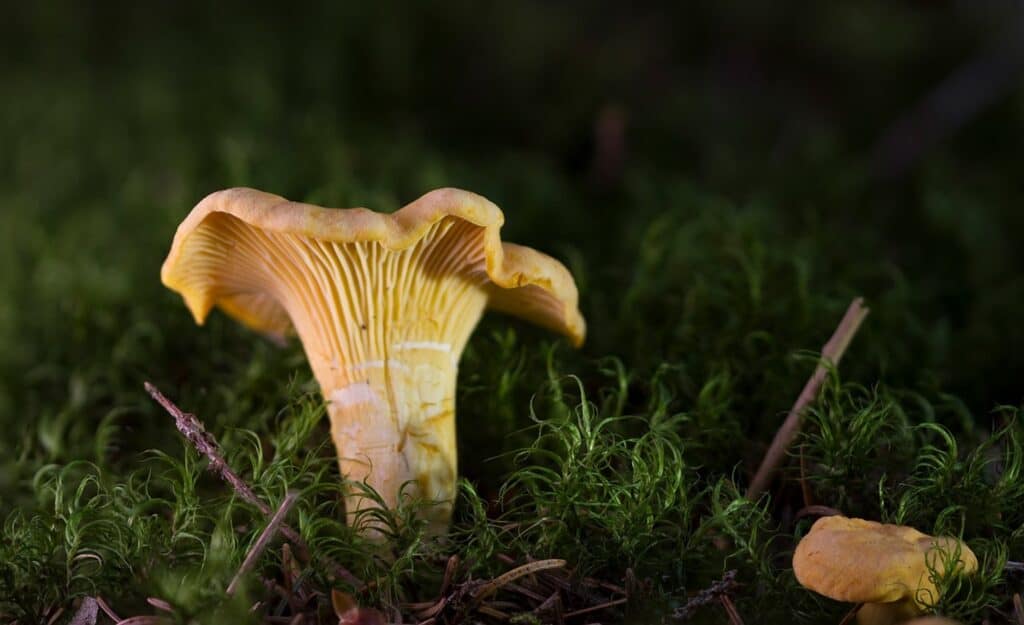 Chanterelles and Yellow Foot Chanterelles are fruity and packed with mushroom flavor. They’re harvested in the late summertime in areas of swamp and forest where hardwood can lay, soften, rot, and provide the ideal growing conditions for chanterelles.

The trumpet caps of these mushrooms lend to collecting debris such as pine needles in the mushrooms’ natural habitat, something foragers have to watch for. Sauteed or fried in cooked preparations, chanterelles’ earthy flavors flourish. They can cost over $100 per pound, which equals about $6.70 per ounce.

Chanterelle mushrooms were first written about in 1783 by a German mycologist named August Johann Georg Karl Batsch. A mycologist is someone who specifically studies mushrooms and fungi.

Price: $12 – $30 per ounce
Region: The Himalayas
Appearance: Conical, with black fronds and a bright white stem 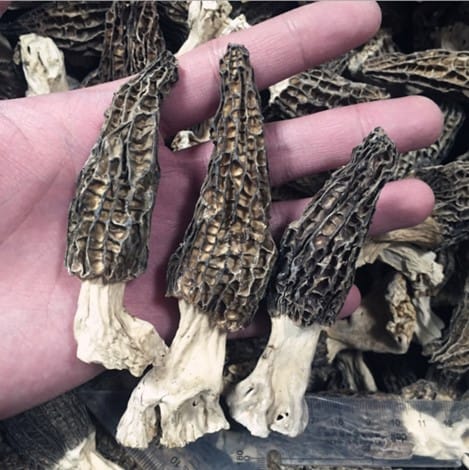 The Morchella mushroom, also known as the True Morel, is a mysterious fungus indeed. As early as 1901, people reported finding them in caves and flowerpots. Yet, despite their exorbitant value, little is known about the Morchellas, except how valuable they are.

For example, many Morchella species seem to be symbiotes, growing into deciduous trees like pines and firs. Foragers know that Morchellas, or at least specific species of it, grow wildly in forests that were recently burned. Wood ash makes the soil more alkaline, which tells Morchellas to start fruiting.

Depending on where you buy them, Morchella mushrooms can cost as must as $30 per ounce.

Morchella mushrooms, sometimes called “Guchchis,” love to grow in rotting wood and leaves. One of the reasons they’re so rare is that they don’t necessarily grow in the same place twice since soil mineralization impacts their patterns so much. Foragers have to be creative when looking for these beauties and remember to soak them in hot water for at least an hour to clean them well (they are notorious for retaining dirt). 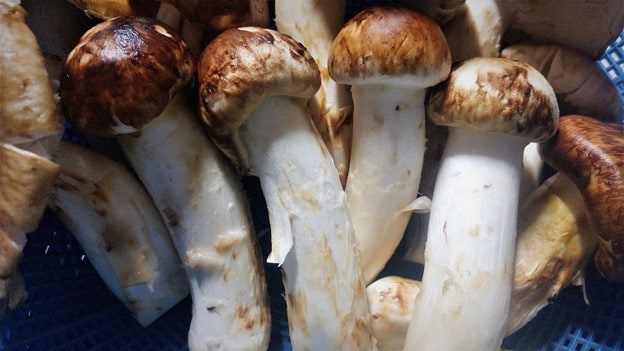 Matsutake mushrooms are prized for their essential use in gourmet Japanese cooking and have been used for that purpose for a long time. They are known for growing in Asian countries such as Japan, China, and Korea, but matsutakes have also been found in limited quantities in Finland, Sweden, and even Canada.

Despite potentially existing in multiple countries, only specific types of forest terrain can house a matsutake, which must have room to grow to a certain height before becoming harvestable. They grow under pine trees, which has given them the nickname, “pine mushrooms.” The largest and most expensive matsutakes can cost up to $57.00 per ounce, but the average one costs closer to $30.

A nematode or roundworm called Bursaphelenchus xylophilus (say that three times fast) has spread throughout Japan in recent times. This worm is a well-known pine-killer, making the growing conditions for matsutakes even more selective and rare, causing the mushroom’s prices to skyrocket. 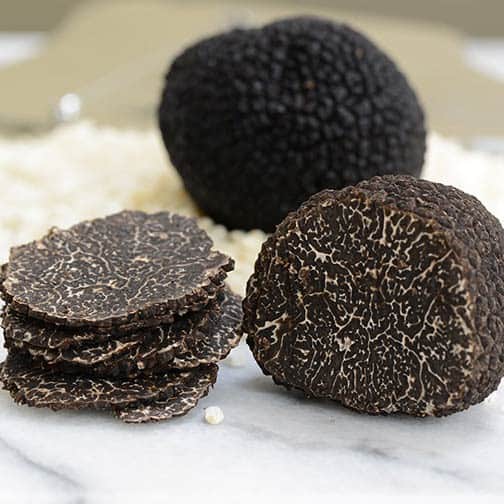 There are four varieties of black truffle, which grow under the ground in their various regions, are excavated by foragers, and sold at outrageous prices to gourmet food dispensaries and restaurants. We decided to combine them into one listing to avoid being redundant.

Périgord truffles are found mostly in Southern Europe while Burgundy truffles can be found growing under hardwood trees throughout the continent. Summer black truffles are the same as Burgundy but harvested in the summer in the Mediterranean. Finally, Chinese truffles, which have a stronger smell, milder taste, and more spongy or stretchy texture than the others, can be found throughout China and other parts of Eastern Asia. 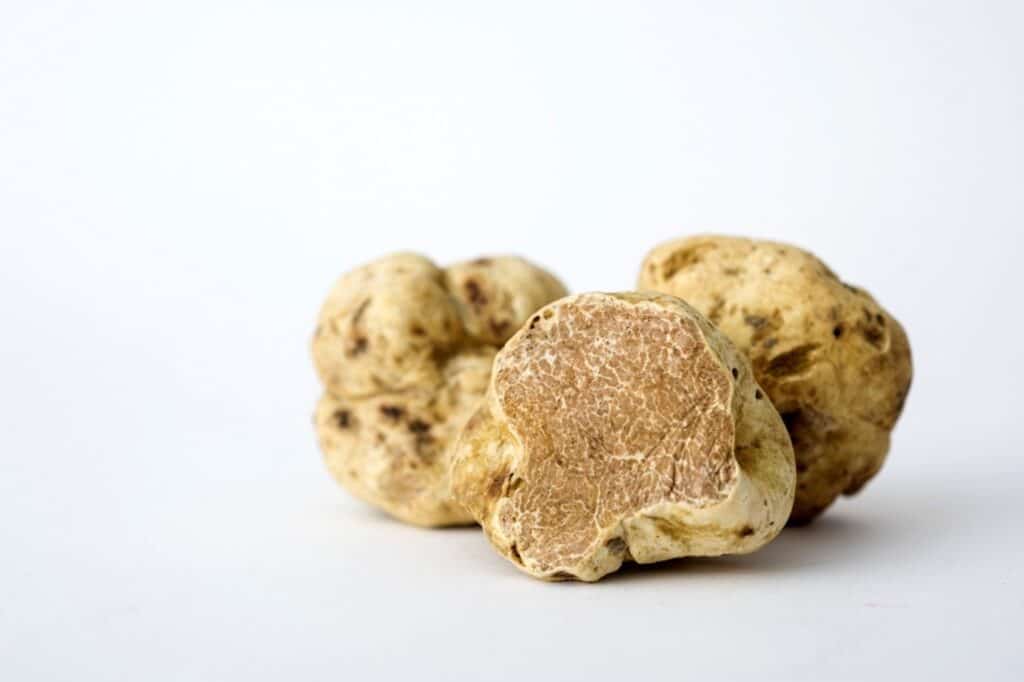 The most expensive mushrooms are white truffles. They are known throughout the culinary world as the best of the best when it comes to mushrooms. Sometimes called “Italian White Truffles” or “trifola d’Alba Maddona,” these mushrooms are found mainly in Northern Italy, in a region called Piedmont. The Italian name translates to “Truffle of the White Madonna,” a statement of the fungus’s holy value. They are so rare that people can’t help but think that finding one is an act of God.

This is why white truffles cost $211.64 per ounce, according to Truffle.farm.

Truffles grow beneath the ground in tubers, not at all like a conventional mushroom. Some people debate if they are mushrooms, but we decided to stretch the definition a bit to include these spongy, edible fungi regardless of their potentially debatable status. White truffles typically grow beneath hardwood trees such as chestnuts and oaks and can be quite large, up to 9 cm in diameter. This only makes them more valuable!

The world’s most expensive mushrooms have both medicinal and culinary uses. You may not ever get your hands on a pound of truffles or porcinis, but in upscale restaurants, these amazing mushrooms can be enjoyed at their best – adding signature earthy flavors to the best sauces, pastas, and soups in the world.