The tabletop card game, Magic: The Gathering, has been around since 1993 and represents the original trading card game in the modern sense. At its most popular, 20 billion Magic cards were made per decade for the more than 35 million people who play the game. It may have been designed by Richard Garfield, but now it belongs to everyone.

Today, Magic is played in yearly tournaments, through virtual deck-builders, and in video games like Magic: The Gathering Arena. Through its many expansions, rule changes, and card updates, Magic has produced some truly desirable, valuable cards. The cards in this list represent the 8 most expensive cards that you can buy. 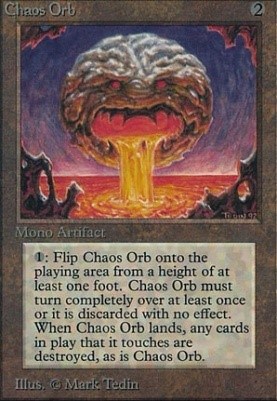 Chaos Orb is the 8th rarest card in Magic: The Gathering, an Alpha edition Artifact with Cast level 2. Its flip effect destroys all the adjacent nontoken permanents that it touches and then destroys itself. It can only be played at a height of at least one foot.

Unlike most of the cards on this list, this Mono Artifact was illustrated by Mark Tedin. To own, Chaos Orb will cost you $17,599.99.

Every Magic format has banned Chaos Orb for its overpowered status. At this point, it can only be played in 93-94 Magic, also known as the Old School format, which is the original game. According to legend, a player won a tournament by tearing a Chaos Orb card and tossing it into their opponent’s play area, destroying all their permanents – this inspired the creation of Chaos Confetti, a card that functions this way permanently. 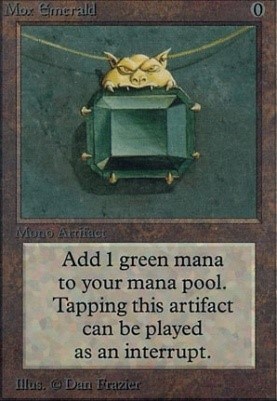 The Mox Emerald is part of the Mox cycle. The 5 original Mox cards named after precious gems all sell for multiple tens of thousands of dollars, including the Mox Emerald, Alpha Edition. This artifact card allows the user to instantly add 1 green mana to their mana pool. This completely changes the tempo of the game as it allows that player to essentially tap the land twice or more in a turn.

This process is so game-accelerating and overpowered that the Mox cards have become banned in every format other than Vintage, in which it is restricted. Players can play multiple cards per turn, assuming they can afford them at $19,999.99 a pop.

The original run of Magic: The Gathering had 25 artists. One of them was Dan Frazier, who illustrated all the Mox cards. His background is in oil painting in the classical, Renaissance style, which is where the Mox cards get their notable look. 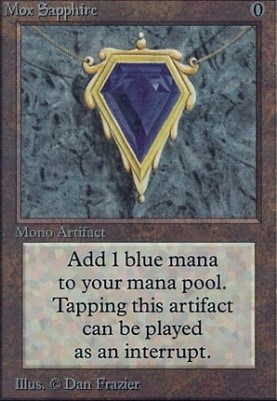 Mox Sapphire is one of the 5 original Moxes, which are all powerful enough to be included in the Power Nine, the most overpowered cards in Magic. Mox Sapphire allows the player to tap the artifact, even as an interrupt, and add a blue mana to their pool for no cost.

This allows players to jumpstart their spells and one-up their opponent’s entire spell infrastructure. To gain this power costs up to $20,000, provided the card is in its Alpha edition.

Since they cost nothing, Moxes can be played multiple times per turn, leading to what players refer to as “mana acceleration.” By speeding up your mana base, players can get high-impact cards out early, leading to card advantage, controlling the pace of the game, and ramping up the field in their favor. This is why the cards are banned in nearly every format. 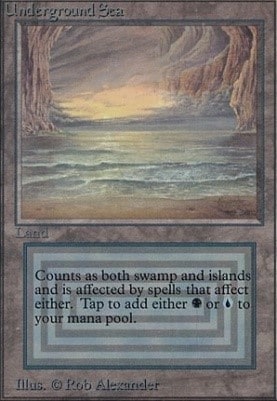 Most of the rarest cards in Magic are Mox Artifacts or Sorceries. Underground Sea is the game’s most valuable Land card, which in its Alpha edition costs $20,999.99 to collect today. The dual lands cards in the original Magic set are high-value collectibles not only for their rarity but for their utility in various play formats like Vintage and Eternal.

Like many of the game’s most valuable cards, Underground Sea is on the Magic Reserved List, meaning that Magic will never reprint the card, ensuring it retains its value. 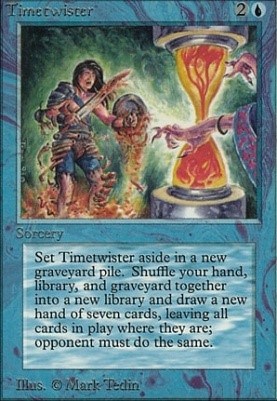 Timetwister is a Sorcery that forces both players to remove their hands and graveyards from play and draw seven cards. This gives its user the ability to essentially reset the game when it’s advantageous for them. Owning Timetwister in the Alpha edition costs $23,199.99 on Card Kingdom. It is widely considered one of the game’s most overpowered cards and is banned or restricted in most play formats.

This powerful spell is another part of Magic’s Power Nine, the game’s most powerful cards. This means that it was only printed between 1993 and 1994, adding to its extreme rarity. 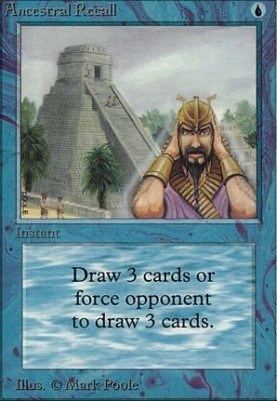 Ancestral Recall’s value is partly determined by the powerful simplicity of its effect, which can be used in so many decks that collectors consider it the best draw spell in the game. Magic doesn’t set a hand size limit, so this effect can benefit you in multiple ways. You can cycle through your deck to find something you need, or you can force your opponent to go through their deck too quickly.

The “boon” or blessing cards in Magic’s original run were limited to only 5 cards – Ancestral Recall was one of them. It is considered to be Blue’s single most powerful card, is rarely legal in tournaments, and is one of the Power Nine, the most powerful cards in each color. Many of the others are on this list already.

Originally, Ancestral Recall was called “Ancestral Memories” and was intended to be a common card. After playtesting it and seeing firsthand how dangerously powerful it was at increasing the speed of the game, it became not only a rare printing but banned in every game format other than Vintage. Even in that format, which typically permits everything, Ancestral Recall is still restricted – it’s just that good. 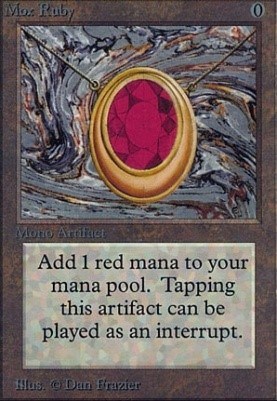 One of Magic’s most all-encompassing rules is the one-land-per-turn rule, which dictates the entire pacing of the game. Like the other Mox cards, Mox Ruby allows players to hack this rule and get their most powerful spells out early. This card in its Alpha edition is incredibly rare, costing $27,999.99 on major collection sites.

Mox Ruby is one of the 5 original Mox or Moxen cards. They are free to play and immediately add mana to the player’s resources, making them outrageously powerful, especially in the early game. Each Mox is a different jewel, drawn by the illustrator Dan Frazier. The word, “Mox,” is a reference to “moxie,” a slang term meaning courage or energy. There even used to be a caffeinated drink called Moxie. 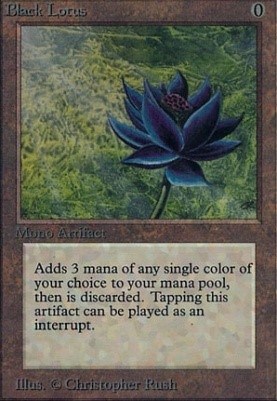 The most expensive and valuable Magic card is Black Lotus, Alpha edition. Black Lotus has long been known as one of the most valuable, as well as powerful cards in all of Magic. Its ability to add 3 of any one color to your mana pool, even as an interrupt, is a simple yet infinitely useful effect. Nearly every deck can benefit from a Black Lotus card. For this reason, the card is on Magic’s Reserved List. This means that it can’t be reprinted, guaranteeing that it will always be rare and always sell for top dollar on the second-hand card collection market.

On Card Kingdom, Black Lotus, Alpha Edition, sells for $149,999.99 (that’s when it’s in stock). The Black Lotus Beta edition even sells for $63,999.99, making it technically the second most valuable card, though we didn’t think it warranted a whole other entry.

The Alpha Black Lotus card also has the distinction of being the most valuable card ever sold. An auction for this card signed by the artist Christopher Rush garnered $511,100 at auction.

Magic: The Gathering is the template for every major trading card game like Yu-Gi-Oh and Pokémon. To this day, tens of millions of players collect and play the game in tournaments. While most of the cards on this list are banned in the major formats, they remain usable in the Vintage formats as well as highly collectible in their own rights.

For tens or even hundreds of thousands of dollars, any of the eight rarest Magic cards can be yours. The power and utility they add to major deck formats is matched by their outrageous prices. And since most are on the Magic Reserved List, they’ll never be reprinted. They’re only getting rarer. Don’t think of it as a splurge – consider it an investment.