Instruments and music memorabilia always perform well at auctions. This is because they have value in so many different areas. They are valuable as instruments, as pieces of history, as memorabilia for famous celebrities and bands, and rare collector’s items in their own right. And almost none are as collectible and valuable as guitars.

This list compiles the 8 most expensive guitars ever sold by the make and model, as well as the musician that made them famous. Continue reading to learn about why these instruments have become some of the most coveted collector’s items in the world. 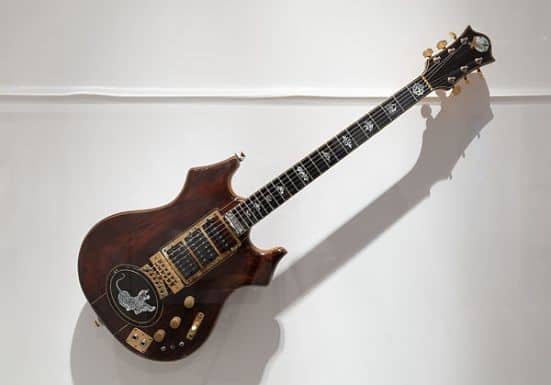 Doug Irwin, the guitar maker and craftsman, created 5 custom guitars for the Grateful Dead’s Jerry Garcia. They were Wolf, Rosebud, Tiger, Wolf Jr., and Eagle. In 1995, when Garcia died, he left the guitars to Irwin, though a legal battle ensued with the remaining band members. Irwin still got Tiger (and Wolf), however, and sold it at a Guernsey’s auction years later in 2002.

Including the buyer’s premium, Tiger fetched $957,500, which at the time was considered the highest price ever paid for a guitar at an auction.

It took Irwin approximately 2,000 hours of work to complete the Tiger, so it wasn’t given to Garcia until six years after he asked for it in 1973. When Irwin sold the piece, he donated the proceeds of the auction to the Southern Poverty Law Center. It was also timed in conjunction with the Grateful Dead biopic produced by Martin Scorsese, called Long Strange Trip. 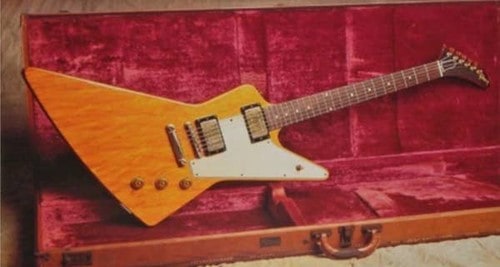 The Gibson Korina Explorer,1958, is one of the music world’s most coveted creations. This guitar was only made approximately 19 times, with fewer than 10 known to still exist. The various owners of this famous instrument include Slash, Kirk Hammett, and Cheap Trick.

It was sold by Denmark Street Guitars, a music shop in London, in 2016. The final listed price was $1.1 million in keeping with not only the guitar’s rarity but its long list of luxurious previous owners.

This guitar featured a stop bar tailpiece, a fretboard made of Indian Rosewood, one tone and two volume control, and a 4-ply pickguard. The original case was brown on the outside with fluffy pink velvet on the interior. 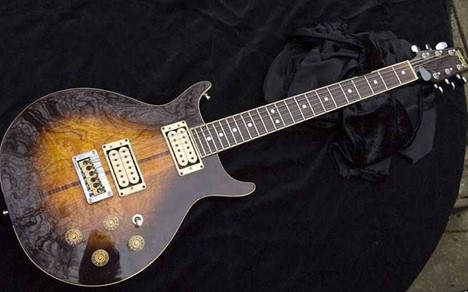 When reggae guru Bob Marley visited Hamamatsu, Japan and toured the Yamaha manufacturing facility, they presented him with this Washburn 22-Series Hawk, also known as the Yamaha SG1000 electric guitar.

The “Reach Out to Asia” fundraising project, which raised money for sufferers of the earthquake and tsunami in Asia in 2004, sold Marley’s guitar, among several others (see below). At the auction, it raised $1.2 million for this relief effort.

Quite a few famous guitarists have been known to play Yamaha SG guitars, including Al Di Meola, Carlos Santana, Steve Cropper, Paul Barrere, and Al McCay. In 2008, Yamaha released a special 40th-anniversary edition of the SBG3000 guitar, which is now one of the most coveted guitars in its own right. 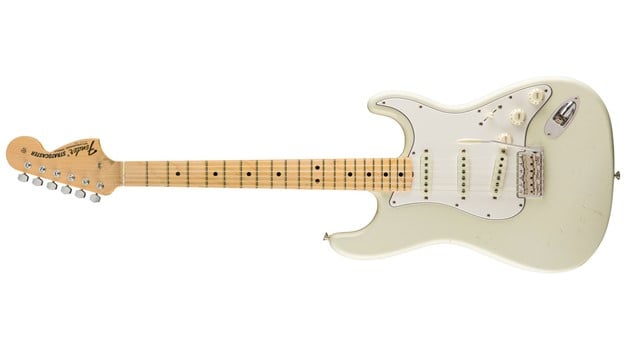 Jimi Hendrix may have had a brief career, dying at the young age of 27, but it was inarguably one of the most influential in music history. This 1968 Fender Stratocaster with the Olympic White body was one of several guitars Hendrix used in his professional career. This one was most famous for his version of “The Star-Spangled Banner,” which he played at Woodstock in 1969.

The guitar was bought privately and now resides in the Experience Music Project Museum, located in Seattle, Washington. It was purchased for 1.6 million pounds, or about $2.11 million.

Hendrix’s Olympic White Fender Strat was made of alder wood with a maple neck. It was not his guitar of choice, however, with fans knowing him best for Black Beauty, a black Strat that he always claimed was his favorite. Some collectors have valued that guitar as high as $10,000,000, though it has never been sold for that much. It was last auctioned by Heritage at an estimate of $750,000 before being pulled from the bidding. Someday, it may top this whole list.

This Gibson J-160E Acoustic-Electric was owned by John Lennon. It was the guitar he played in some of the Beatles’ most famous work, including the albums With the Beatles and Please Please Me. However, it went missing for over 40 years.

This Jumbo Gibson with the iconic Sunburst spruce finish was lost at a holiday concert in London by the Beatles’ roadie, Mal Evans. Over many years, it was bought and sold by private buyers until resurfacing at a Julien’s auction and selling for $2.4 million, bought by an anonymous buyer.

The Beatles manager, Brian Epstein, bought two of these guitars (one for Lennon and one for George Harrison). Lennon’s guitar became by far the more valuable of the two, being the instrument on which Lennon and Paul McCartney composed the legendary Beatles songs, “I Want to Hold Your Hand” and “I Saw Her Standing There,” among others. 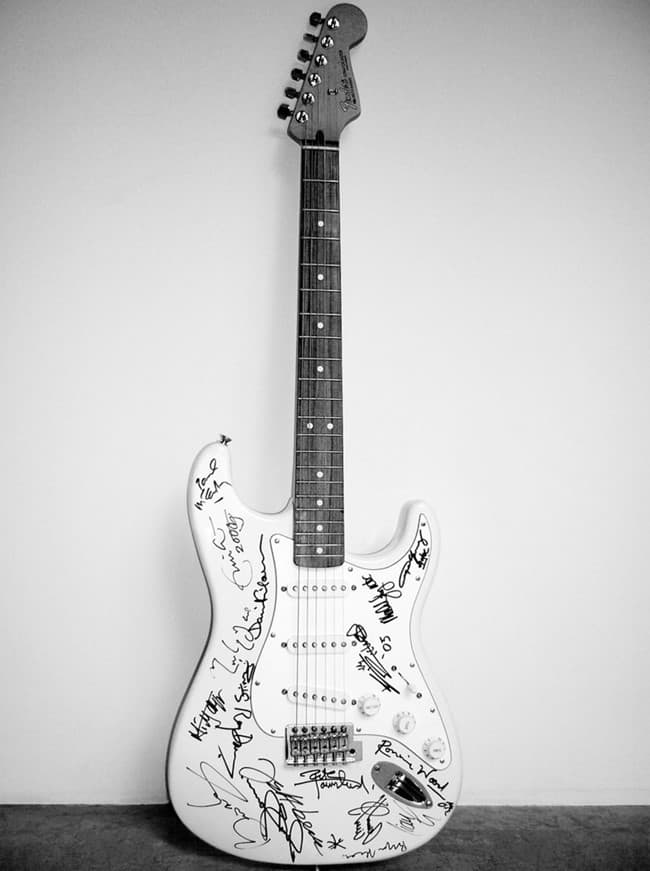 This Fender Stratocaster is unique in that unlike every other guitar on this list, it was never owned by a famous musician. Instead, this 2004 guitar was put up for a charity auction in 2006 to raise money for victims of the 2004 Asia Tsunami.

Its goal was to create the most valuable display piece possible by recruiting as many living legends as possible to sign it. Included in the names scribbled onto the face of the guitar are the familiar scrawls of Eric Clapton, Mick Jagger, Keith Richards, and more.

The final sale price of this guitar was $2.8 million.

This charity auction took place in the Ritz-Carlton Hotel in Doha, Qatar. It was bought by Her Highness Sheikha Miyyassah Al Thani. 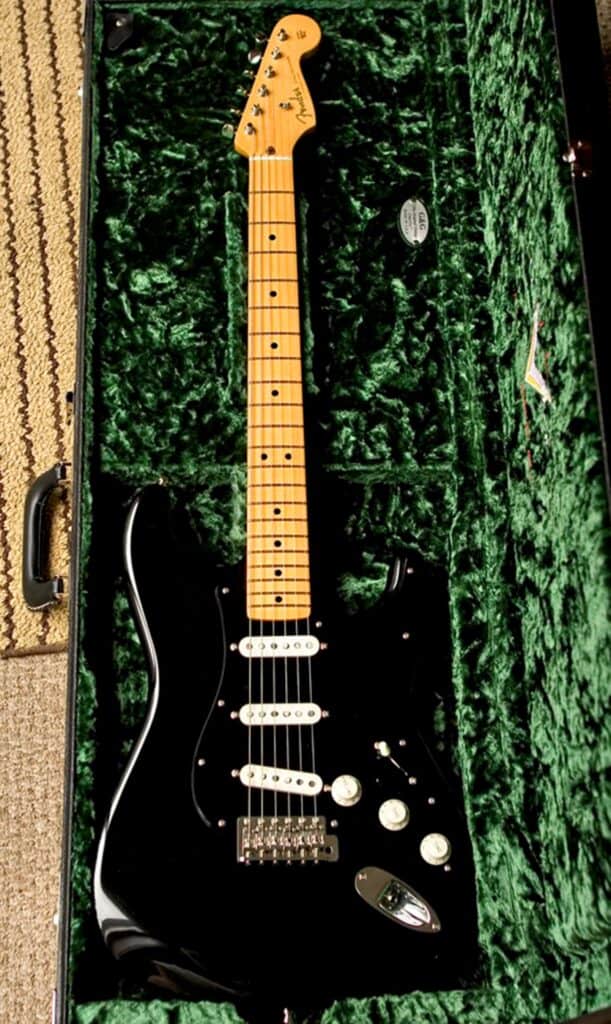 David Gilmour, best known for his time in Pink Floyd, played a 1969 Fender Stratocaster nicknamed “Black Strat.” This guitar was the one featured in much of Pink Floyd’s most famous work, including the albums Comfortably Numb and Money.

The allure of Pink Floyd drove up its auction price in 2019, where Gilmour raised money for charity with this and a few other guitars. When it sold, it was the most expensive ever, only being beaten by one on our list. It sold for $3.975 million, to Jim Irsay, the owner of the Indianapolis Colts (and evidently a huge Floyd fan).

Over the years, this guitar has been modified numerous times, including being painted black and switching necks between rosewood and maple multiple times. Due to these modifications, the Black Strat has almost no original 1969 parts. Only the pickup selector switch and bridge plate are that old, and possibly not even that. 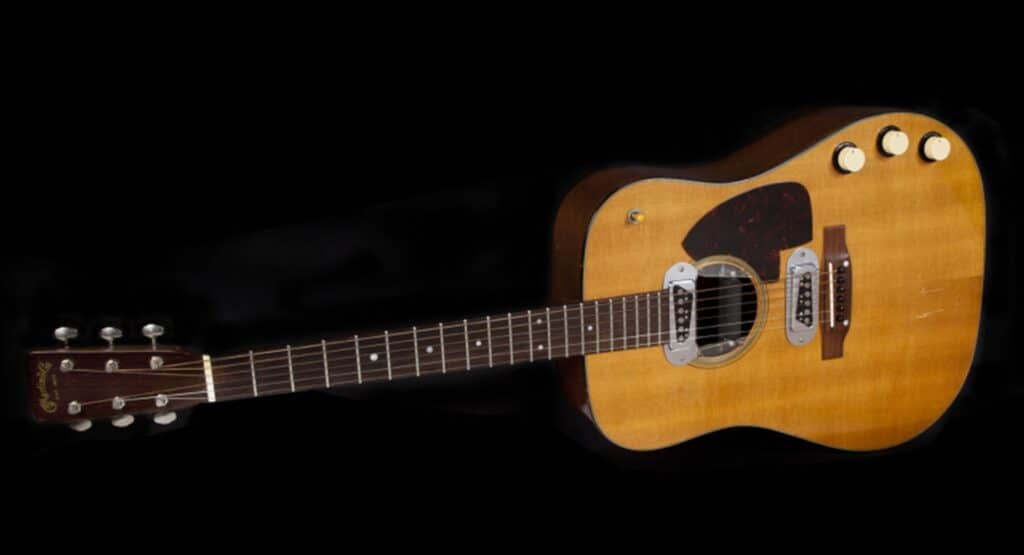 The most expensive guitar is this 1959 Martin D-18E acoustic guitar. It was the guitar of Kurt Cobain, who of course helmed the rock band, Nirvana. This is the guitar he played at MTV Unplugged, the infamous New York concert. At Julian’s auctions in 2020, it sold for $6.01 million to an Australian businessman named Peter Freedman. He’s the owner of RØDE Microphones and one huge Kurt Cobain fan.

Owning this guitar is not only memorabilia for a lost music legend but for one of the music industry’s most influential pieces of equipment as well. Since Nirvana essentially popularized alt-rock for an entire generation, this guitar was a focal point for industry-wide music change.

The most expensive guitars ever sold, whether at private sales for avid collectors or at charity auctions, are personal, musical, and historical artifacts. They cost millions because they represent, not only a piece of one famous musician’s career but also a piece of music history. Many of these guitars were the strings that changed the world of music, from the guitar that strummed the Beatles’ most famous hits for the first time to the guitar that Kurt Cobain used to redefine alternative rock for an entire generation.

They may cost millions, but when music history hinges on the back of a set of strings, you might pay it if you had it!